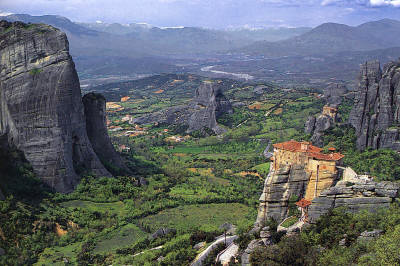 16th Century monasteries perched atop the towering peaks of Meteora

Kalabaka, known in Byzantine times as Stagi, is a small town and starting point for a visit to Meteora, a group of precipitous towering rocks in the centre of the plain of Thessaly. This unique geological phenomenon was created by a series of upheavals in the earth’s crust millions of years ago. The untrodden rocky peaks of the Meteora, totally isolated from the rest of the world, were a refuge for hermits from as early as the 11th Century.

The Skete of Stagi called Our Lady of Doupiani, formed by the independent ascetics, built the first post-Byzantine monasteries of the Eastern Orthodox Church of Meteora in the 14th Century. Before long, the Meteora had developed into a major centre for monasticism, second only to Mt. Athos itself. A UNESCO World Heritage Site, six monasteries are still in use today. In olden days one reached the inaccessible peaks in a basket drawn up by the monks operating a windlass. Today a good road leads to the monasteries with their wonderful wall paintings, exquisite icons of the Cretan school of icon painting, and religious artistic treasures. During winters these establishments are cut off from the rest of the world, enveloped in mist, wind, and snow.

The difference between the Eastern Orthodox Church and the Roman Catholic Church is a fine line based more on liturgy and administrative structure than anything else. The Orthodox Church, rejecting the Roman Catholic Church in 1054, was originally divided into four patriarchates (Constantinople, Alexandria, Antioch, and Jerusalem). The Orthodox Church, as its name suggests, conforms more faithfully to the established doctrines that were formulated in the early years during the universalization and standardizing of Christianity.

I visited Varlaam monastery and the convent of St. Stephen, the only convent at Meteora. The convent’s church was built in the 18th Century and houses the skull of the saint. Talk about feminism! The convent won an award for “best religious establishment” in Meteora; the nuns, busy little plump young ladies with glowing faces dressed in their black habits, scurried around the church and shops. I was told they travel extensively in Greece and Europe collecting funding for their establishment, look after a very pretty rose garden in their spare time and keep the monastery commercially viable by tending to the smooth flow of tourists flocking to their souvenir shops.

Varlaam monastery was a more sombre and grim affair in contrast, taking the ascetic view of a life deprived of material and sensual pleasures more seriously. Founded in 1517 by the brothers Theophanes and Nektarios Apsaradas from Ioannina, it is named after the ascetic Varlaam who first established a monastery at the site in the mid-14th Century. The monastery was later renovated in 1780. The Katholikon, dedicated to all saints, is adorned with wall paintings dating back to 1548 by the well known post-Byzantine iconographer Frangos Katelanos. The concentration of colour and form presses down inside with visual stories of the life of Jesus and his apostles. Silent niches with stands for Bibles circle the two apses on the sides. The monks spend long hours here chanting verses from the Bible. The monastery houses an important collection of codices (manuscript volumes of the scriptures and Classic texts), reliquaries (containers in which relics are kept and displayed for veneration), intricately carved wooden crosses, rich robes of the religious heads of the monastery, gold embroidered epitaphs and other ecclesiastical treasures.

Meteora is a place quite unlike any other in this whole world. Surreal in every sense. As I stood on a small landing on the side of one of the mountains to take a photograph of the landscape, I felt I was in a breathtakingly beautiful yet totally unreal world. Like inside one of Salvador Dali’s paintings. Huge black monolithic mountains rose in all directions, the emerald green plains far down below, the wind tearing at me, and perched on these ominous yet beauteous gigantic bare fingers of rock, red-stoned places of monasticism where man desperately tried to cut himself from the pleasures of this world in his quest to be one with god.

On my way back to Athens I drove through the Pass of Thermopylae which separates Mt. Kallidromo from the sea. One kilometre long and in antiquity 5-20 meters wide (now broadened at some places up to 5 kilometres by silt from a nearby river), the pass was the scene of many battles down the centuries, the most famous being the heroic resistance of the Spartans against the invading Persians in 480 BC.

Xerxes, the Persian king had brought his enormous army through northern Greece, but the Greeks were already waiting for him at Thermopylae. Three hundred Spartan warriors had marched north under their General, Leonidas. En route, Leonidas picked up additional men; by the time he reached his destination his full strength was some 7,000. The Greek forces resisted bravely, but were betrayed by a Greek traitor who showed the Persians a way through the mountains, enabling them to strike at the Greeks from the rear. Responding swiftly, Leonidas sent back the main body of the Greek army back to safety, but kept his own 300 men and a hand-picked group of 700 allies, determined to hold the pass. He attacked and was killed almost instantly. The Greeks fought on leaderless to their death. The dead of Thermopylae were buried in a great commemorative mound which still stands at the scene. A statue of Leonidas on the battlefield pays homage to the heroism of the Spartans.

Modern Athens at first sight had appeared tacky; crowded, hot and dusty. Yet, as I entered the city on my way back from Kalabaka, having known, understood and loved Greece for the last eight days, the city seemed to tug at my heartstrings. There was a connection. Athens was beautiful; even in its tackiness. The old white buildings, the traffic, and its redeeming splendid monuments of past centuries.

At night I went out for a dinner and show of Greek folk dancing, replete with claps, shouts of ‘opa’ (a kind of cheer), wine, music and vigorous yet elegant dance performances. I hung around till late, eventually winding my way through the brightly lit plaka, the main residential and tourist district of Athens inhabited since prehistoric times, back to my hotel.

My flight was at 4 in the morning. Till 2 I sat in the balcony overlooking the Temple of Zeus, all lit up, right in front of me. The traffic buzzed beneath, lights agleam. The ruins silent, deep in thought, talking to me. My pilgrimage to Greece was over. My homage full circle. To thought, freedom, and creativity. To be the best one can be. 🙂