“Is there some festival or special event taking place here today?” I whisper to the Buddhist monk seated next to me.

I am confused, and overwhelmed.

The entire Mahabodhi Temple Complex in Bodh Gaya, in the Indian State of Bihar, is draped with marigolds, lotuses, and roses. Hundreds of ochre and red-robed shaven-headed Buddhist monks and nuns prostrate in prayer in the grounds, and around the main temple. A handful of tourists quietly join the circumambulations around the main temple. I see pilgrims from Bhutan, Burma, Cambodia, China, Japan, Korea, Thailand, Tibet, and Sri Lanka in deep prayer. Most are dressed in their traditional attires. I see a few pilgrims from the West as well, no less in the purity of their faith. Groups chant with micro precision around me, not one voice out of sync, their mantras punctuated with the crescendo beats of rattle drums.

“No. Nothing special. It is like this every day all winter.” And he goes back to his meditation.

Nothing special. Just the extraordinary experience of being part of, and witnessing Buddhists from all corners of the world come and pay homage to the place where Buddha received enlightenment. 🙂

The Mahabodhi Temple Complex, a UNESCO World Heritage Site, is to Buddhists what Mecca is to Muslims.

Here, at this very place, under a Bodhi tree, a young ascetic by the name of Siddhartha Gautama seated himself cross-legged 2,600 years ago, determined to find the Truth. Having renounced his princely life, he was on a quest to understand the causes for human suffering and how to free oneself of them. After meditating for 49 days, the Truth in the shape of the eight-fold Middle Way was revealed to him on Vaisakha Poornima [full moon in April/ May].

Scattered across the complex are seven locations marked by simple markers. It is believed Buddha spent a week at each place after his enlightenment. These locations, along with the famed Bodhi tree are the raison d’etre for the temple’s sanctity.

Come, let me take you on a virtual tour through them.

Pilgrims from far corners of the world make their way to the main temple.

This is their destination: the majestic, mystical Bodhi tree under whose shade Gautama Buddha received his enlightenment.

Right under the Bodhi tree is the first spot, where Buddha continued to meditate after his enlightenment. It is marked with a Vajrasana [diamond throne] installed by Emperor Ashoka in the 3rd Century BC as part of a temple. Please note this is not the original Bodhi tree but its grandchild. The original tree was destroyed by Ashoka’s wife in a fit of jealous rage. But not before his daughter Sanghamitta took a sapling of it to Sri Lanka. The tree in the complex is from a sapling of the sapling.

In the second week Buddha moved to a hillock across the grove from where he gazed unblinking at the Bodhi tree in awe and gratitude. The site is named Animeshlochana Chaitya. The third week saw him taking 18 steps by the temple’s north wall, between the Bodhi tree and Animeshlochana Chaitya. Called Ratnachankrama or Jewelled Walk, lotus flowers sprang up where his feet touched the ground.

Ratnaghar Chaitya, to the temple’s north-east is where Buddha spent his fourth week, contemplating on the Truth. Blue, yellow, red, and white rays are believed to have emanated from him as he meditated. These colours now comprise the Buddhist flag.

Marked by a pillar near the temple’s main entrance is the banyan tree where he answered questions by Brahmins during the fifth week. In the sixth week, Buddha was at the Lotus Pond, just outside the temple complex enclosure. Here the serpent king Muchhalinda protected him from a severe storm.

I cannot claim I found the above locations, armed with a guidebook or a guide in person. It was more like the locations found me, one at a time, over the three days I was in Bodh Gaya. The symbolic grand finale to my visit being Buddha’s seventh and last location in the precinct. I just seemed to walk into it. Placed to the south-east of the temple, the Rajyatana tree is where two merchants—Tapussa and Bhallika—offered rice cake and honey to Buddha. They were the very first to hear his doctrines.

Way back in Buddha’s time this whole area was but a forest grove. There were no temples nor any stupas. The much rebuilt and restored Mahabodhi Temple one sees today came up later, in fact over a thousand years later, in the 5th or 6th Century AD.

This is my favourite image, of all the ones I took in Bodh Gaya. It is the primary effigy inside the Mahabodhi Temple sanctum, and is believed to be a thousand years old. The priest is passing on the pilgrims’ offerings inside.

Mahabodhi Temple in all its glory; Right: Standing Buddha by the main door.

Towering 52 metres high, the late-Gupta styled Mahabodhi Temple was built by the Pala kings of Bengal. It was destroyed by Muslim invaders in the 12th Century and restored by the Burmese kings in the 14th Century. Deep inside its sanctum is a gilded 1,000-year-old statue of Buddha in the Bhumisparsha mudra with one finger touching the earth, calling it to witness his enlightenment.

The grounds are dotted with votive stupas and effigies of Buddha built by kings, princes, the wealthy, and ordinary folks like you and me, over the centuries.

Don’t miss the prayer bell donated by the Burmese and kneeling figures at the bases of the entrance torana. Whilst at it, also watch out for the standing Buddhas carved in black stone flanking the main temple doorway and the white pigeons which have made the niches lining the shikara [temple tower] their home.

The treasures of the Mahabodhi Temple Complex are not blatant. They lie hidden, much like Buddha’s Truth, but once revealed add a whole new meaning to the place, and life.

But more than the physical treasures, I feel it is its intangible treasures which take one’s breath away. It took away mine, for sure. Take for instance the collective energy of people bound in the belief of selflessness and compassion. The focussed meditations and prostrations. The undivided devotion to a teacher, for that was what Buddha was. He never claimed to be God.

I look at the monk next to me, still in deep meditation, unmoved by the chanting, crowds, or my unbridled stares. I close my eyes and try to bring my attention back to my breath as well, determined to also not be distracted by what was outside and inside of me. 🙂

Buddha’s footprints or Buddhapada at the small shrine on the pathway leading to the temple entrance. Sources claim it dates back to the 3rd Century BC and was part of Ashoka’s original temple. Ashoka was the first emperor to declare Buddhism as his State religion. 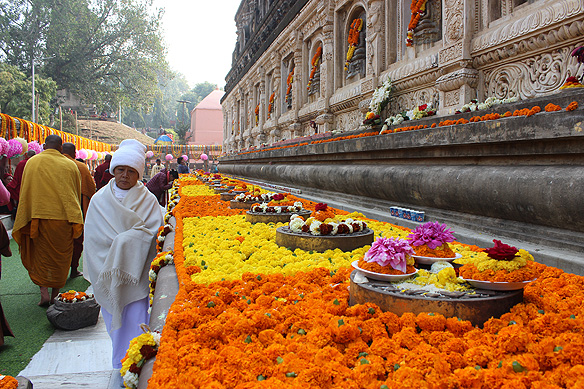 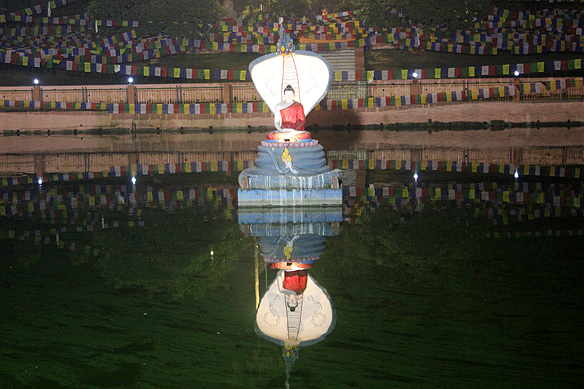 Lotus Pond, just outside the temple complex enclosure where Buddha spent his sixth week after enlightenment, meditating. The snake is Muchhalinda, the serpent king who protected Buddha from a terrible storm during this week.

The rich Buddhist cultural tapestry that is Mahabodhi Temple Complex. During the winter months of India, different nations perform their religious ceremonies in its precincts, replete with full regalia. 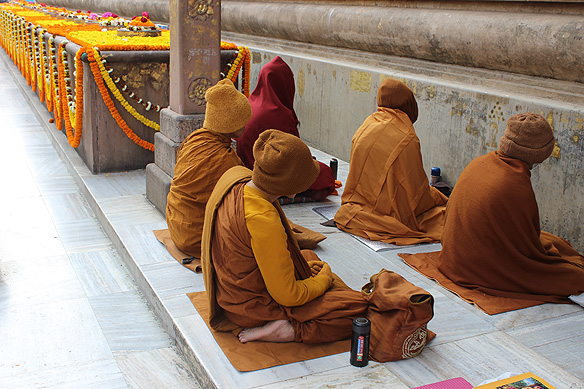 A pilgrim ties an offering around the railing which surrounds the Bodhi tree.

Prayers in the guise of butter lamps. Some lit. Some prayers waiting to be asked.

The student, the classroom, and the teacher.

The above face will always be synonymous with the Mahabodhi Temple Complex for me. I must have passed this monk a good few times during the span of a day. He remained still throughout. Unblinking. Deep in meditation. Fully in control of his own peace. ❤

[Note: Do keep at least one whole day for the complex—it deserves it. I have to warn you though, the Mahabodhi Temple Complex is NOT a tourist attraction or a check box in a travel list. It is an experience.]