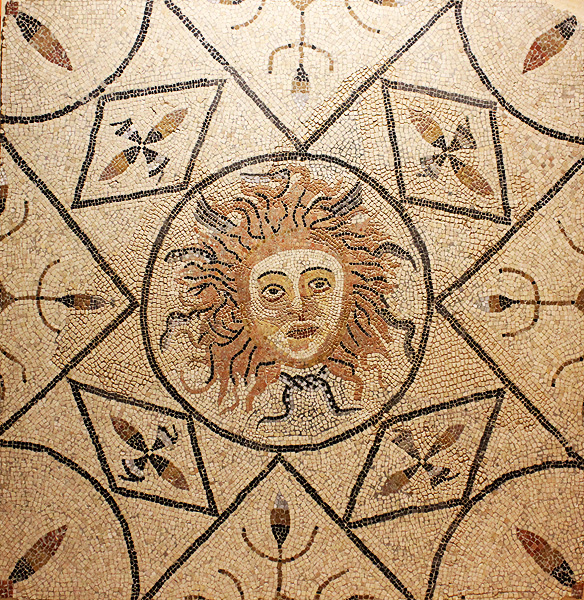 There is a reason I travel solo. I tend to get lost when I travel. No, not physically. That would be impossible in today’s day and age with Google Maps and diligent service providers busy at work with their mobile phone tracking systems to keep you connected. What I mean is I get lost in the experience. I lose track of time. Which is great for me, but, have come to realize, is not so great for others. 😀

This post is about one such lost-in-the-experience day I spent at a place called Volubilis in northern Morocco, in the foothills of Mount Zerhoun. And how you too, if you wish [that is], could lose yourself in its magic!

Volubilis was a large Roman colonial town on the fringes of the Empire. Though dating back to the 3d Century BC and occupied till the 11th Century AD, its hey-day lasted from 44 – 285 AD when it was capital of the Roman province Mauretania Tingitana.

There are the inevitable Capitoline Temple, Basilica, and Triumphal Arch which characterise Roman towns. But what makes Volubilis stand out from others is its large collection of mosaic floors in situ with scenes from Roman mythology. Orpheus, the Labours of Hercules, Bacchus and Ariadne, along with a host of others spring to life from the pieces of coloured ceramic planted into the ground. To help identify the mosaics, the houses are named after the main mosaic or an artefact found inside.

The day I visited, it was drizzling and Volubilis was wrapped in a soft grey mist, the ruins dark and wet. Which actually turned out to be a good thing for the rains washed clean their floors, revealing the mosaics in all their translucent beauty.

If in Morocco already or planning to visit some day, you may find yourself in Volubilis—one of the greatest ancient Roman sites in the world—and be aching to explore it. The question is, do you want a tourist guide yakking away and giving you 5-minutes to “see” an attraction before shepherding you to another. If yes, go for it.

But if not. But if you want to savour the feel and mood of the ruins and be transported back in time, Volubilis is very doable on one’s own. All you need to know is where to look and what to look out for.

Starting Point: Turn left after the Interpretation Centre and climb up the steps to the Archaeological Site 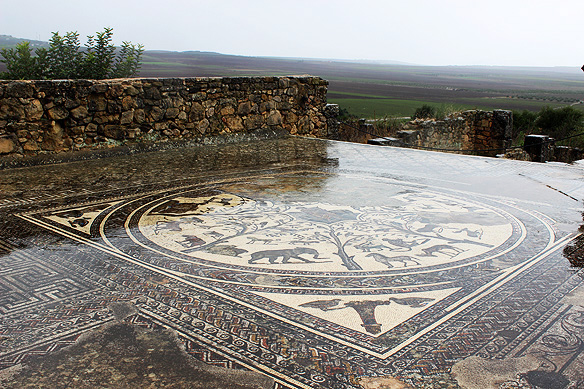 Nestled in the first cluster of ruins you will come across in the archaeological site is the above mosaic. It is located in a now-long-disappeared villa’s dining room and features the Roman god Orpheus playing his harp. He is in the centre and is surrounded by trees, animals and birds, looking everywhere except at him. Two thousand years ago, the diners would have been seated on couches against the walls with this lovely “stone” carpet spread out in front of them. 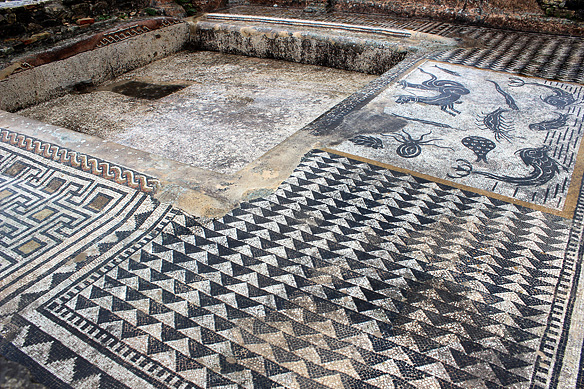 Also, inside the House of Orpheus is this collection of mosaics around the atrium. Each square would have been a room in itself. Isn’t the black and white mosaic square filled with sea creatures absolutely gorgeous! 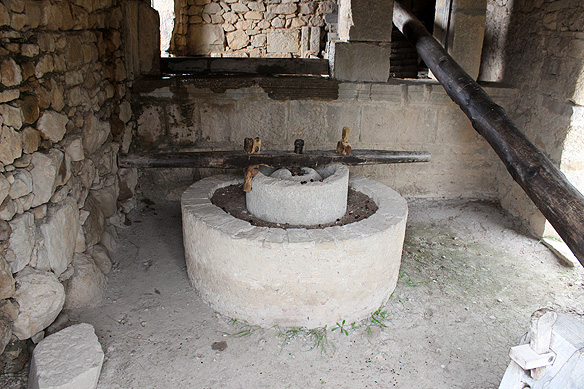 Walk on straight to the restored olive mill. Production of olive oil was a key component of Volubilis’ economy, along with grains which grew in abundance in the fertile plains around the town. Many of the villas had their own oil presses. Oil was used for cooking, bathing and in medicines, as well as a source for fuel. Fifty-eight oil presses have been discovered in the archaeological site. 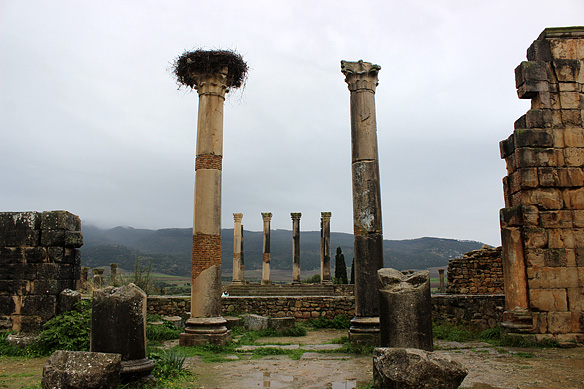 Ahead, towards your right are Volubilis’ grand public buildings. One of the most important buildings in every Roman town was the Capitoline Temple dedicated to the three principal deities of state: Jupiter, Juno, and Minerva. These three were worshipped by the civic assembly in both good and bad times. Volubilis was no different. Its Capitoline Temple built in 218 AD stands behind the Basilica and comprises of 13 steps leading to a Corinthian columned edifice. 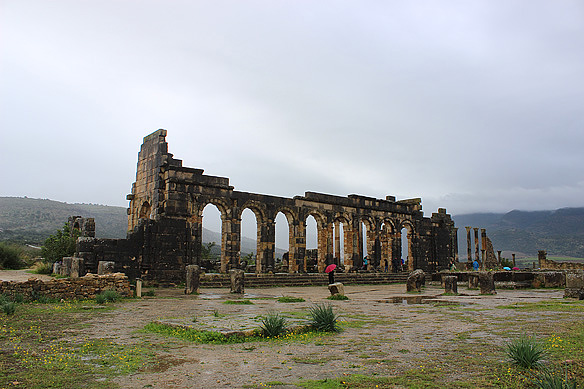 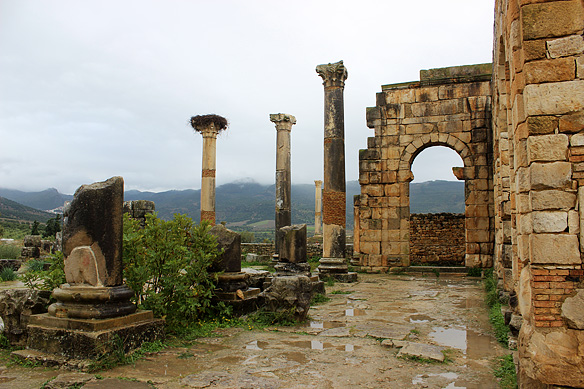 The other key public building was the Basilica. Basilica in Roman terminology refers to the edifice used as a courthouse and for administration of the state. One of the finest basilicas built in provincial northern Africa, the one at Volubilis is a large double-storeyed structure measuring 42.2 metres long and 22.3 metres wide. In front of the Basilica is the Forum where markets were held. 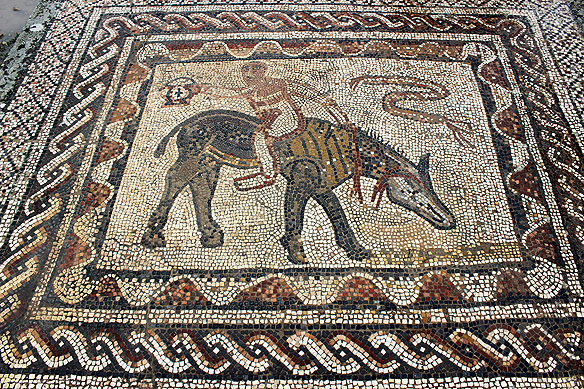 Known by various names, the House of the Acrobat is near the Forum, on your left. It is a quirky composition highlighting the Roman penchant for tongue-in-cheek compositions. The mosaic contains a poker-faced acrobat seated on a donkey, facing the tail, and holding a cup as if it was the most natural thing to do. 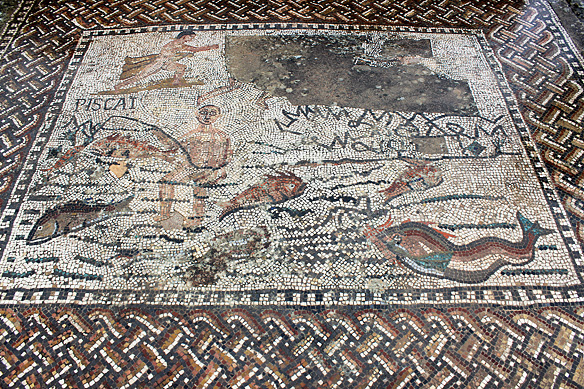 Next to the House of the Acrobat is the House of Ephebe. The mosaic here almost veers on graffiti with text, doodles and figures, boxed into a border. Check out the gentleman sitting in the middle of the river fishing, while fishes of various sizes romp around him. I wonder what was in that part of the composition which has worn off … There are a pair of legs visible, running away from the figure with outstretched arms! 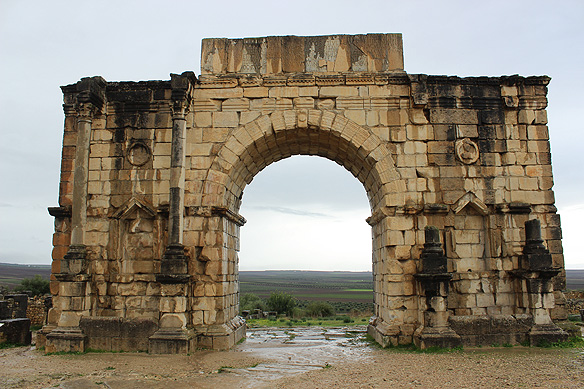 The most distinguishing feature of Volubilis is its triumphal arch—the Arch of Caracalla which stands at the end of the main street Decumanus Maximus. In Roman times it was topped with six horses pulling a chariot and decorated with nymphs and medallions. It was built by the governor in honour of Caracalla [Marcus Aurelius] and his mother Julia Domna in 217 AD. Caracalla was a North African himself and in his edict of 212 AD had announced Roman citizenship to all free inhabitants, which translated to immunity from certain taxes.

Note: Look out for the official inscription on the top of the Arch. Everything in the above paragraph appears in it, albeit in Latin. 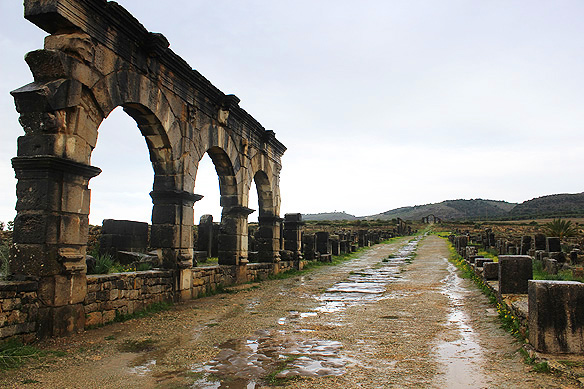 Facing the Arch of Caracalla is the main street, Decumanus Maximus. It ends at Tingis Gate or Gate of Tangier [that little gate at the end of the road]. The street cuts through the new town and was flanked by shops, behind which were the houses of the elite. Some of the finest mosaics lie down this road: House of the Knight, House of the Labours of Hercules, House of Dionysus and the Four Seasons, House of the Wild Animals, and House of Venus.

Stop 9: House of the Knight 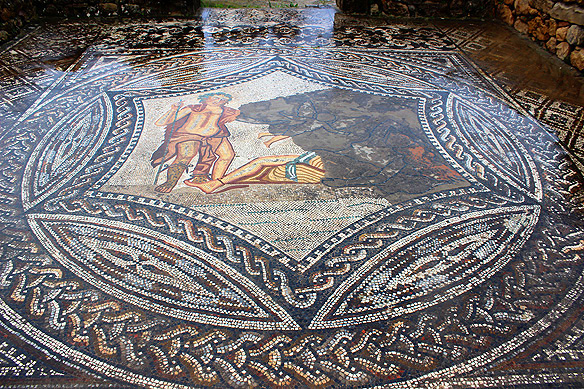 Walk down the broad Decumanus Maximus. On the left, at the very beginning of the street is its first treasure—House of the Knight/ Rider. The mosaic narrates a scene from the life of Bacchus, Roman god of agriculture, wine and fertility. In this scene Bacchus has just come across the abandoned sleeping Ariadne on the island of Naxos. He falls in love with her at first sight and offers her marriage. According to Roman myth, they eventually get married and have six children.

Stop 10: House of the Labours of Hercules 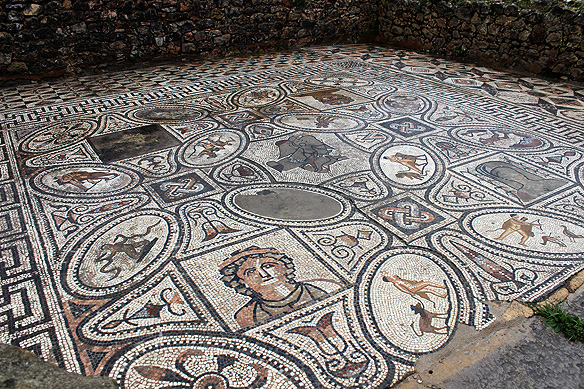 Adjacent to the House of the Knight is the House of the Labours of Hercules with its magnificent mosaic. Each of the twelve tasks Hercules performed as penance for killing his wife and children is depicted in an oval of its own. Hercules himself has own little frame. Combined with perfect symmetry and monochromatic colouring, the mosaic is an absolute visual delight. Don’t you agree?

Further down the street are the House of Dionysus and the Four Seasons, House of the Wild Animals and House of Venus. I am not putting up pictures of these. I’d like you to discover them for yourself. 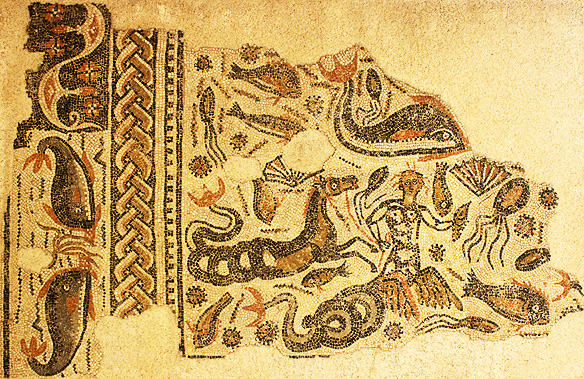 Post the walk, may I recommend a browse through the Interpretation Centre. It does a fantastic job in explaining Volubilis and displaying artefacts found around the site, including some more stunning mosaics. Videos and photographs help recreate what Volubilis must have been like two millennia ago. To know more, visit their website here. For a map of the site to help you with your walk, click here.

Note: The above mosaic is known as the Mosaic of the Triton. Dolphins were a symbol of good fortune in Roman times and used profusely, as in the above case.

Have you been to Volubilis? Which was your favourite mosaic? Do share in the comments section below. I would love to hear about them.

[Note: This blog post is part of a series from my travels to Morocco for 3 weeks in November-December 2018. To read more posts in my Morocco series, click here.]