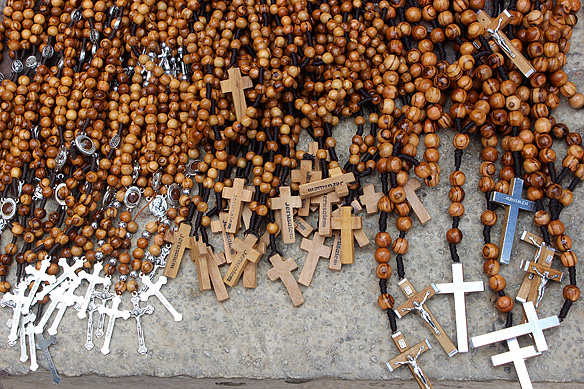 Whew. Now that I have got that out of the way, let me write on. Comforted by the thought you and I are on the same page.

Some of us like to wander. To immerse ourselves at a particular site just because, inexplicably, it touches a chord within us. To gaze at the details. Behind and under the obvious. To look at all versions of history and legends with an open mind.

Why? Because you are in the Holy Land. And Jesus Christ spent his last night before his crucifixion as well as ascended to heaven from here. Christian communities from around the globe have built a string of lovely churches down a near perpendicular street between these two key sites. Because you do not have to be believers of the Old or New Testament to believe in a higher sacred self. Or Roman Catholic or Eastern Orthodox. But also, because the view from the top and the walk to the bottom is what memories, which make you all starry-eyed once back home, are made of. 🙂

Before I wrap up this blog post’s introduction, did you notice I said Roman Catholic and Eastern Orthodox. There is a reason. It is called the East-West Schism or Great Schism of 1054 which divided Christianity into two branches, divided on doctrine, theology, language, politics, geography, liturgies, and lists of sacred sites—permanently. In the Mount of Olives, like the rest of Israel, there are, thus, two Christian narratives, each the unequivocal truth depending on which side you are on.

So, here we go, on a self-guided walk down biblical Mount of Olives, one memorable stop at a time with stories galore. ❤

NOTE: Many bloggers and sites assert Mount of Olives is not safe to explore on one’s own. I disagree. I explored it solo and independently, like a few others I met on the way. It is as unsafe or safe as anywhere else in the world. The usual rules apply. Dress modestly and don’t carry all your valuables on you.

Starting Point: Chapel of the Ascension 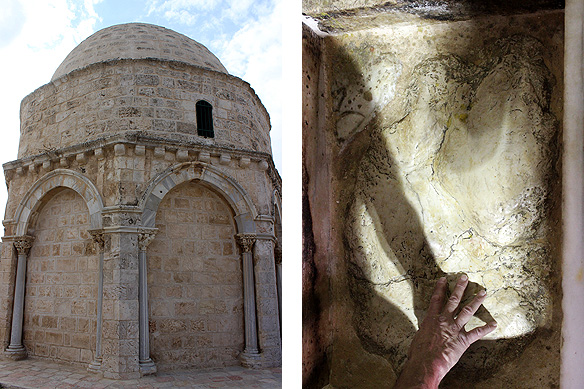 We start at this tiny chapel perched on top of Mount of Olives. It marks one of the key events in Christianity—where Christ finally ascended to heaven from, 40 days after his resurrection. Who says so? The Crusaders in the 12th Century say so. It comprises an inner Crusader structure with a mihrab and an outer Islamic octagon edifice topped with a dome reflecting its see-saw journey from a Christian to Islamic and back to Christian sacred site under Saladin’s reign. A stone slab imprinted with Christ’s right foot lies inside. The slab with his left foot imprint is in the Al Aqsa Mosque on Temple Mount.

Travel tip: Every year, on the 40th day after Easter, the Feast of the Ascension festival is held right here.

Stop 1: Pater Noster [Our Father] or the Eleona Church 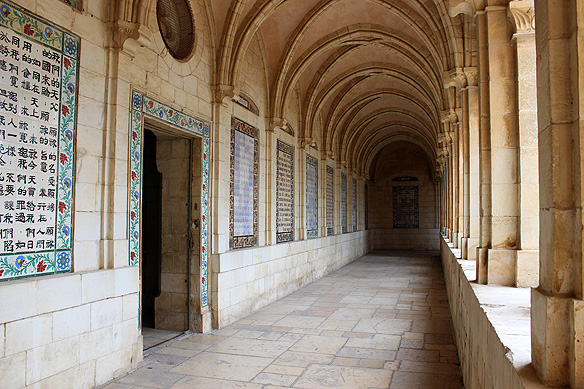 Exit and walk to your left. Facing you at the T-point ahead is the Pater Noster Church.

If your school had even the slightest Christian leaning, recitation of the Pater Noster or Our Father prayer would have been a fixed element of your daily schedule. I studied in a convent school for two full years, so am speaking from experience. Imagine this prayer then translated into over a hundred languages, from Samaritan to Bengali, and the result is Pater Noster Church, the site where Christ taught it to his disciples. The early-20th Century French church stands next to the Byzantine Church of Eleona [Olives] which 80-year-old St. Helena built in the 4th Century AD. She was of the belief this was where Christ’s ascension took place.

Travel tip: Look out for the Pater Noster prayer in your language. I bet you, it is there on the walls! 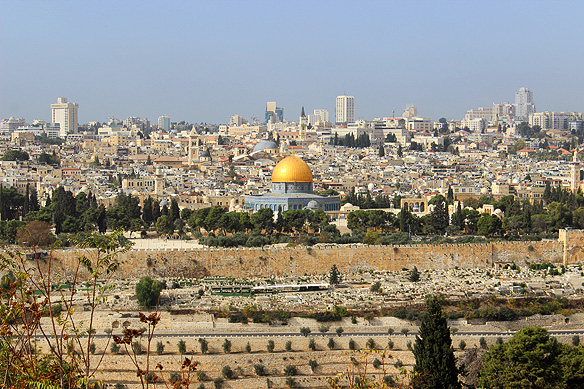 Turn left when you come out of the church and walk on straight.

That perfect view which you have come to identify as synonymous with Jerusalem spreads out to your right. The world’s oldest Jewish cemetery [3,000 years old] with approximately 150,000 graves stretches to Suleiman the Magnificent’s 16th Century Old City walls. And those graves closest to the wall? That is the Catholic Cemetery. In Jerusalem, as in most of Israel, the lines between Judaism, Christianity and Islam are blurred, and thin. All three monotheist religions, with Abraham as their common patriarch, are of the view that the valley between Temple Mount and Mount of Olives is where God will make his final judgement at the End of Days. That the gates of heaven will open here. By the way, these grave sites presently come at a premium price of US$30,000.

Stop 3: Tomb of the Prophets 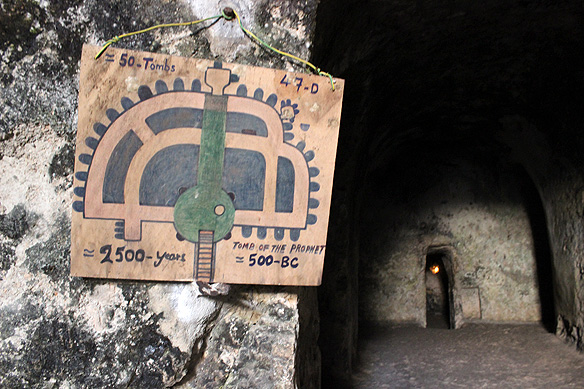 Take the narrow path branching out to the right. A few metres down is the Tomb of the Prophets to your left. Go in, descend the stairs to the subterranean burial site.

It is dark. The guard-cum-guide inside will give you a lit candle to find your way around at a charge of 5 Shekels. Jews believe this is the 2,500-year-old burial site of the Old Testament prophets, including Prophet Zechariah. Recent research claims the 50 tombs date back to the 1st Century BC at the earliest and the inmates are 4th – 5th Century AD Christian Jordanians. Just take the candle, and do a walk around the otherwise pitch-dark cave. It is quite an experience in itself.

Once done, get back onto the narrow path and walk down the hill. It soon turns into a steep road which just keeps getting steeper. 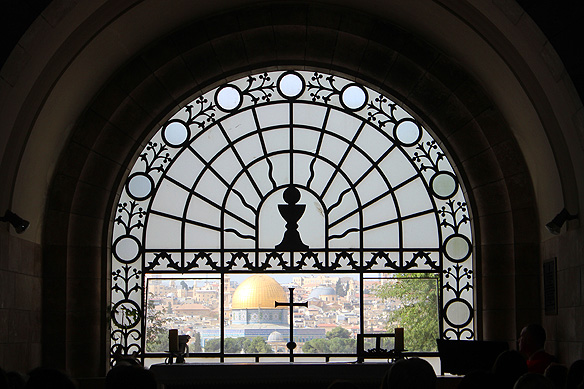 Unlike most traditional churches which face east, the Roman Catholic Dominus Flevit Church faces west. There is a reason for it. To the west is Temple Mount. Way back in Christ’s time the colossal Jewish Temple stood on it. Christ is believed to have stood at this very same spot and mourned the fate of the Temple. He could foresee the destruction of 70 AD. The current 20th Century Italian church is aptly shaped like a teardrop and christened “The Lord Wept” in Latin. Behind it are the remains of the earlier Byzantine church with its wonderful 1,500-year-old mosaic floor filled with fruits and plants and Greek inscriptions.

Travel tip: Don’t miss the view of Temple Mount through the picture window inside!

Before you leave the Dominus Flevit Church complex, have a dekko at the ancient burial site to your left discovered by local Franciscan monks. Inside it are ossuaries or bone-boxes decorated with floral and geometric designs and the Greek inscription ‘Christos’ meaning Messiah which affirm the presence of early Christians in Jerusalem way back in the 1st and 2nd Century AD.

Keep walking down the super steep road till you reach a pair of high closed gates on your right. You may need to press the doorbell for it to be opened from the inside by one of the nuns. The golden onion-domed Church of Maria Magdalena is open only on Tuesdays and Thursdays, from 10 am to 12 noon, but is well worth some planning to coincide with this slot. It was built by the Russian royal family in 1888 to serve Russian pilgrims to Jerusalem and is an integral part of Jerusalem’s ethereal skyline.

Travel tip: The coffin by the altar contains the remains of the Russian Grand Duchess who came for the church’s consecration. Her corpse was smuggled out of Russia in 1921 via China to honour her wish to be buried here, and only here.

Stop 7: Tomb of the Virgin Mary 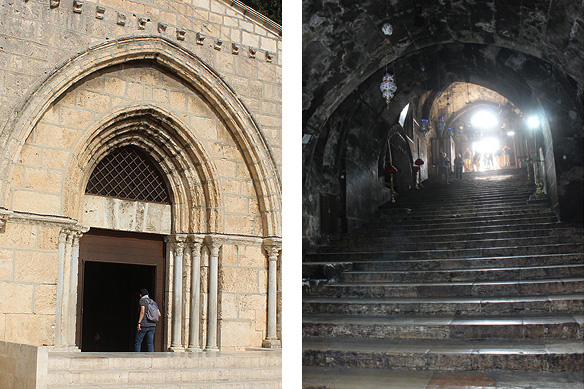 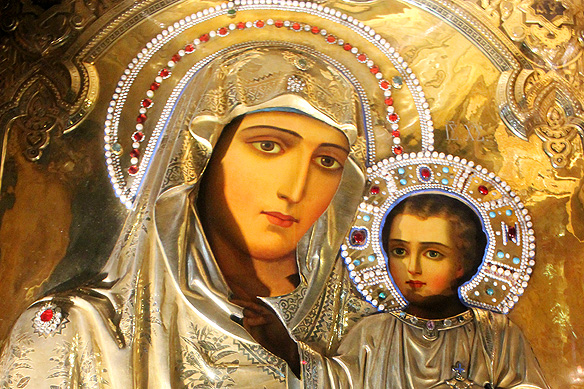 At the T-point where the road ends, turn left into El-Mansuriya Street. To your right is the Tomb of the Virgin Mary.

Deep in the bowels of Mount of Olives, at the bottom of a flight of well-worn stone steps is the dimly-lit crypt of a Crusader church. Inside it is the tomb of the Virgin Mary. Hanging oil lamps, gold leaf icons, and shimmering candles surround devout pilgrims deep in prayer. There are two different sites for most historical and legendary Christian events as mentioned earlier. This is the Greek Orthodox and Armenian Church version of Mary’s Tomb. The Roman Catholic Church version is at Dormition Abbey. Some even claim she is buried in Ephesus. But there is no ‘body’ inside any of them as she was said to have been ‘assumed’ into heaven.

Travel tip: Halfway down the steps are the tombs of Mary’s parents, Hannah and Joachim, to your right and the famous Crusader queen Melisande to your left.

And here’s one more tip: Next to the Tomb is the Grotto of Gethsemane. Christians maintain this is the cave where Christ’s disciples fell asleep, and Judas kissed Christ and called him ‘Rabbi’ to reveal his identity to those who had come to arrest him.

To your left on El-Mansuriya Street is the biblical Garden of Gethsemane, remnants of the olive groves where Christ and his 12 disciples came to after the Last Supper at Mount Zion and spent the night before his arrest. Botanists estimate the olive trees are 600 to 800 years old with 2,000-year-old roots. The exact spot of the arrest is marked by the Grotto of Gethsemane across the street [see travel tip for Stop 7].

Stop 9: Church of All Nations 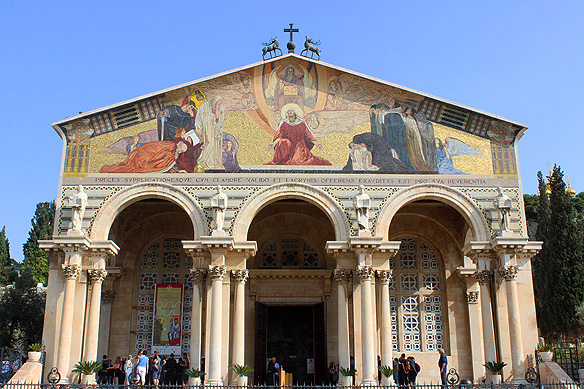 Walk through the Garden of Gethsemane to Mount of Olives’ most famous and visited church—the Church of All Nations, also known as Basilica of the Agony decorated in stunning mosaics. Its 12 domes are representative of Christ’s 12 disciples and the 12 nations which helped build it in 1924 on the remains of a 12th Century Crusader and 4th Century Byzantine church. The Byzantine-revival styled church’s centrepiece is the large wedge of rock by the altar where Jesus prayed in agony on the night of his arrest [hence the name]. Elaborate prayers are held throughout the day. Do attend one. They are a splendid affair!

Turn left again into Derech Jericho and take the narrow path to your right, downwards.

Carved into the limestone rocks on your left, at the base of Mount of Olives, are a row of three mystical tombs frozen in time. Legend dates them to the Old Testament. They are the Tombs of Absalom, King David’s beloved rebellious son, a family of priests which went by the name Hezir, and the High Priest Zechariah. Carbon dating and inscriptions fast forward them between the Second Temple Period and 1st Century BC. Either way, whether 3,000 or 2,000 years old, they make a perfect last stop on a walk to the Mount of Olives where the Old and New Testament still live on.

Travel tip: An atmospheric cafe across the tombs serves cold drinks. A heaven-sent after the four-hour under-the-blistering-hot-sun walk. 😀

[Note: This blog post is part of a series from my solo and independent travel to Israel for 15 days in November 2019. To read more posts in my Israel series, click here.]