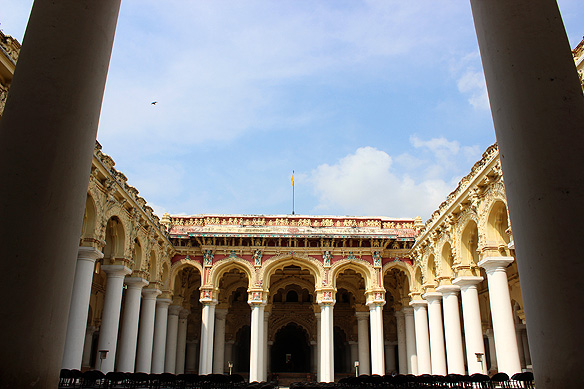 Where gods are celebrated there are usually rulers behind it.

Where there are temples … There are also, thus, palaces.

The Temple Towns of Tamil Nadu were no different.

Most of these palaces have crumbled to the vagaries of time. These are after all a couple of thousand-year-old cities we are talking about. But what remains is mind-boggling. Colossal as if made for giants. Filled with art as if it were the only language spoken and understood.

This is my last post in my Tamil Nadu Temple Town series. I thought it befitting I end it with the spectacular palaces in Madurai and Thanjavur, cities which housed India’s most magnificent temples. These palaces were the last homes of its rulers, a peek into royal life four hundred years ago.

3,700 sq. metres of a sun-drenched courtyard is hemmed in by a forest of circular pillars on all four sides. There are 248 of these pillars. Each 17.5 metres tall and 1.5 metres in diameter.

Welcome to the home of a man who saw himself as a giant in the scheme of things in Madurai.

When King Thirumalai Nayak’s queen saw the palace for the first-time, way back in the year 1636, she exclaimed to her husband that it reminded her of a stable for elephants. Miffed by her remark on his labour of love, he had her locked up and got himself another queen. One who appreciated the grandeur of his ceremonial hall a tad better.

From 1529 to 1736, the Telegu-speaking Madurai Nayaks ruled much of modern-day Tamil Nadu. Huge amounts of wealth earned from agriculture and trade were pumped into the city’s spiritual centrepiece, the Meenakshi Amman Temple, and this astounding piece of architecture.

Thirumalai Nayak was the most prominent of the 13 Madurai Nayak rulers. A great warrior and devout Hindu rolled into one, he was much loved by his people throughout his 36-year-long reign [1623 – 1659]. He was also a great patron of the arts and architecture. Numerous legends recount his generosity and humility towards his artists and artisans. It was under him the Dravidian style of temple architecture transformed into the archetypal Madurai style.

The colossal Thirumalai Nayak palace that stands today is only a quarter of the original. His grandson stripped much of it to build his own palace in Tiruchirappalli which never saw the light of day. War, time and development razed the rest to the ground until Lord Napier, the Governor of Madras, decided to have it restored in 1858 to use as a garrison.

There were two parts to the original palace: Swarga Vilasam [Celestial Pavilion] and Ranga Vilasam [Colour Pavilion]. Spread between the two were the Throne Room, royal residential quarters, a theatre, shrine, armoury, ponds, and gardens.

All one gets to see now are the Throne Room and the Dancing Hall. Despite this, be prepared to gasp in awe. If not for anything, but the sheer scale. And that it is but a fraction, of what once was.

Travel tips: 1) Visit the palace in the morning for the best light. 2) A sound and light show is held every evening in English from 6:45 pm to 7:35 pm. 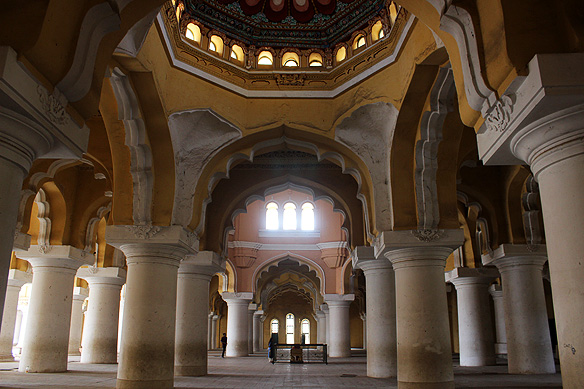 Throne Room in Thirumalai Nayak Palace, the 17th Century King Thirumalai Nayak’s home—an eclectic mix of the colossal, and the dainty. Each of the 248 pillars is 17.5 metres high and 1.5 metres wide. 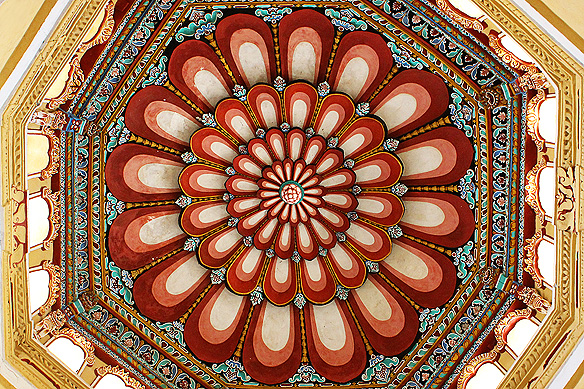 Detail, 3-dimensional stucco ceiling decoration in the Throne Room. Each ‘petal’ is bordered with stucco embellishments. 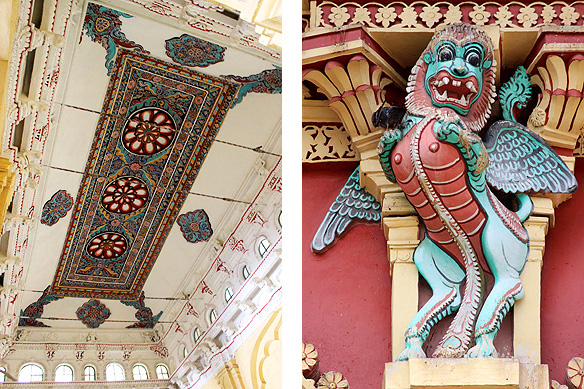 Left: This wondrous ceiling belongs to the harem. Right: Yali, a mythical creature used repeatedly by the Madurai Nayak rulers, who believed it to be the most auspicious of all motifs. 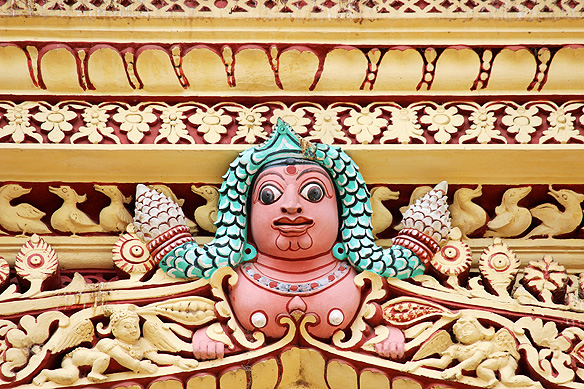 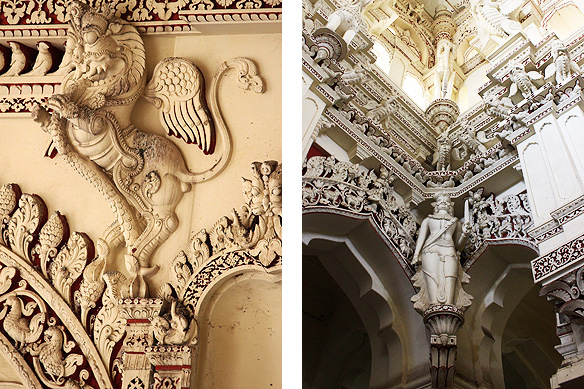 Nymphs and another yali. Right: Stucco in the Natakasala or Dancing Hall. 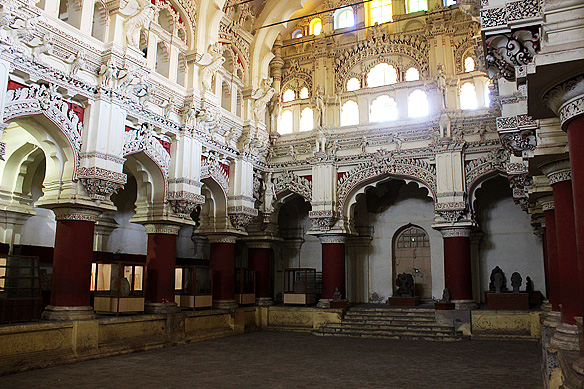 King Thirumalai Nayak, along with his queens, used to watch dance performances accompanied with live music in the evenings in the Natakasala or the Dancing Hall lit up by burning torches. 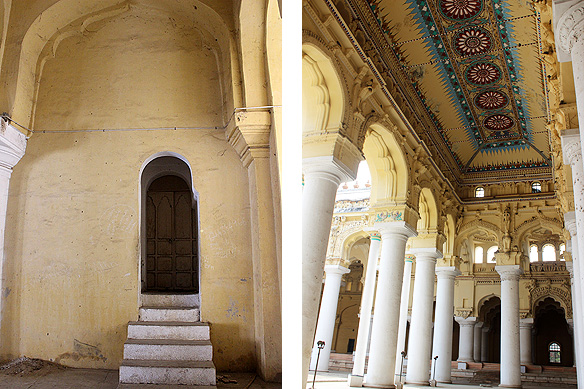 Left: Door leading to the prayer room. Right: Throne Room colonnade with another gorgeous ceiling, no two designs ever the same. A mixture of shell lime and egg white called chunnam was applied to the palace walls to give them a gleam which has shone through the past 400 years. 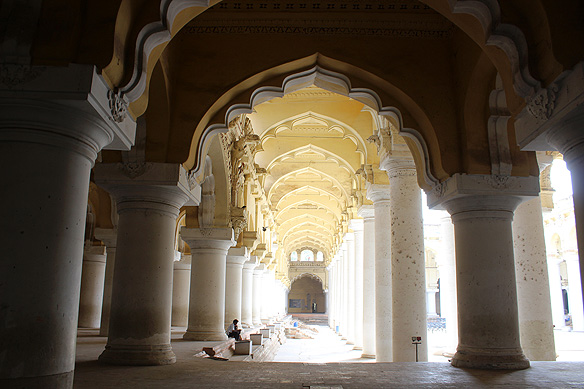 Those little human figures, more than any words, illustrate the scale of the palace. Though Thirumalai Nayak Palace is a ‘monument’ now, and that too off the beaten path, what wonders it must have held within its walls in the past. 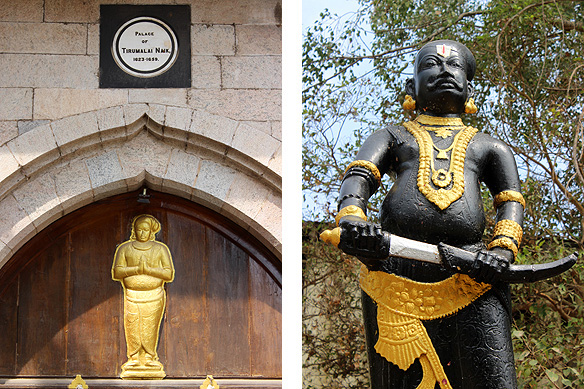 The king himself: Thirumalai Nayak [1623 – 1659]. Warrior, ruler, patron of the arts, and a giant in stature in his own eyes, and that of his loyal subjects. 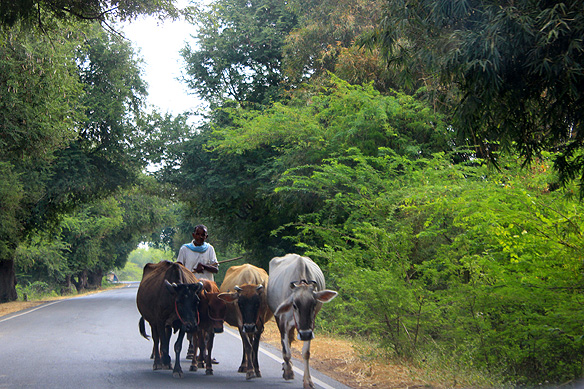 Traffic en-route to Thanjavur. If you wondering why I have this picture here, it is because it captures my road journey just perfectly. Thick green foliage, clutter-free rural India, and a road that took me to new experiences and destinations!

If the Thirumalai Nayak Palace in Madurai is all about grandeur and scale, fit for giants, the Thanjavur Maratha Palace is about the finer side of royal life. A palace complex filled with museums on art and literature.

Not many know or associate the Marathas with Tamil Nadu. At least I didn’t, and must confess I was surprised on discovering the connect. After all, the Marathas were from Maharashtra on the other side of the Deccan plateau.

Whilst Maharashtra to-date celebrates the dynasty and its empire at every possible socio-political and cultural level, Tamil Nadu has historically been seen as the domain of the Tamil Cholas and Pandyas, and the Telegu Nayaks.

But Thanjavur’s relationship with the Marathas was neither brief nor insignificant. It lasted for some 200 years from 1675 to 1855 and covered 9,600 sq. kilometres. A chapter set into motion when Venkoji, the half-brother of famed Maratha King Shivaji conquered the Thanjavur Nayak Kingdom [1535 – 1675]. Descendants of the royal family still live in a section of the palace.

Result: A slice of Maharashtra in Tamil Nadu which spoke and were culturally true-blue Marathi.

The Thanjavur Palace already stood in Thanjavur when the Marathas took over the city. But what the Marathas did do, was embellish every inch of it further with glorious sculpture, paintings, and a love for learning.

Behind the inconsequential entrance and winding dark corridor is the palace’s Durbar Hall, a riot of art. On the other end of the complex, in the Sadar Mahal Palace, is the Raja Serfoji Memorial Hall and the Royal Palace Museum. The latter houses a collection of centuries-old elegant Chola bronzes which any international museum would give an arm and a leg for.

However, what truly bowled me over was the Saraswathi Mahal Library, started by the Thanjavur Nayaks and added to by the Thanjavur Marathas, in particular Serfoji II [1797 – 1832], an art and culture buff.

One of Asia’s oldest libraries, its rich and quirky collection comprises of over 46,000 volumes including a rare collection of palm leaf manuscripts both in Sanskrit and various indigenous languages. There’s Dr Samuel Johnson’s dictionary [1784], a pictorial Bible printed in Amsterdam [1791], ancient maps of the world, 17th Century physiognomy charts by Charles Le-Brun, stunning Tanjore paintings, and even illuminated manuscripts of the Rig Veda, Ramayana and Mahabharata!

Travel tips: 1) Photography is not allowed inside the library. 2) Don’t miss the Charles Le-Brun collection of drawings matching human faces with animal faces, and illustrations of punishments meted out in China in the 18th Century. 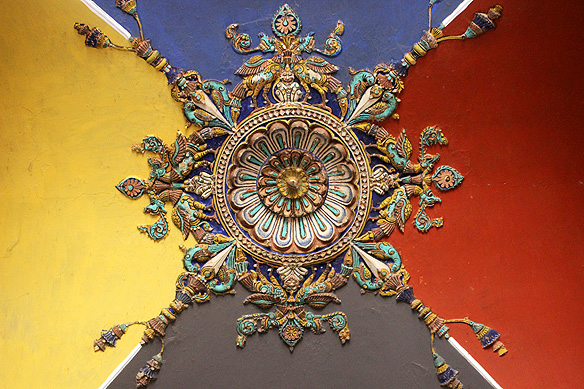 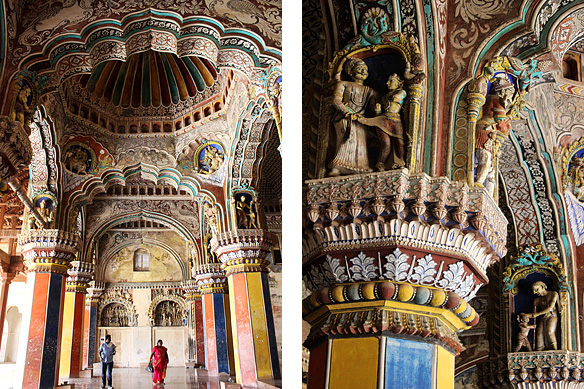 Durbar Hall or Royal Court, renovated by Maratha King Sahaji in 1684. This is where royal coronations took place and the kings met their subjects and special guests. 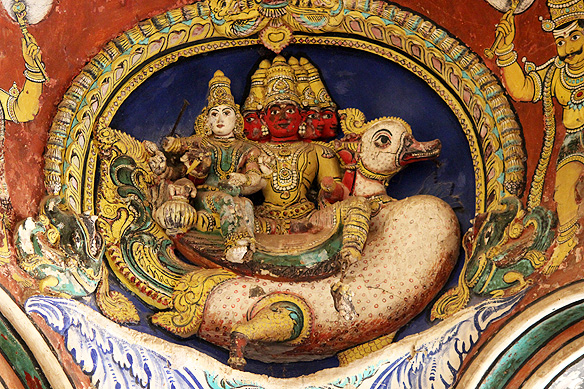 Detail, Durbar Hall. Brahma and Saraswathi. The creator god who fell in love with his own daughter, and then married her. 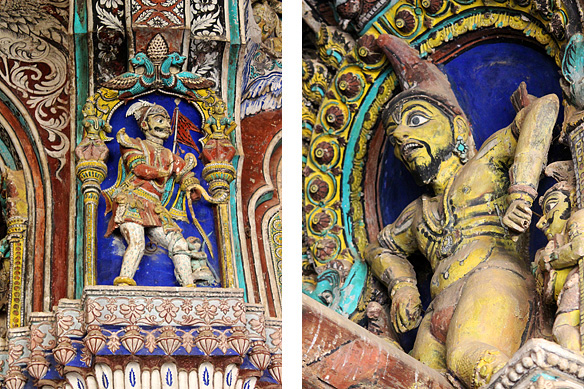 Left: A Danish East India Company soldier. Right: A mendicant. From gods, to common folks to the Europeans. They are all present in the Maratha King’s Durbar Hall in their authentic selves. 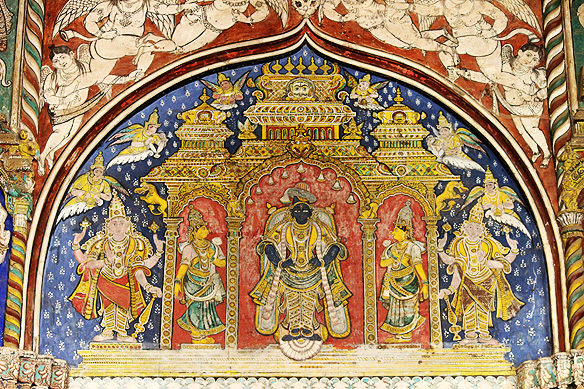 Thanjavur fresco in the Durbar Hall depicting Vishnu with his consorts Sridevi and Bhudevi. Did you notice the charming fusion of winged European cherubs and winged Indian deities? 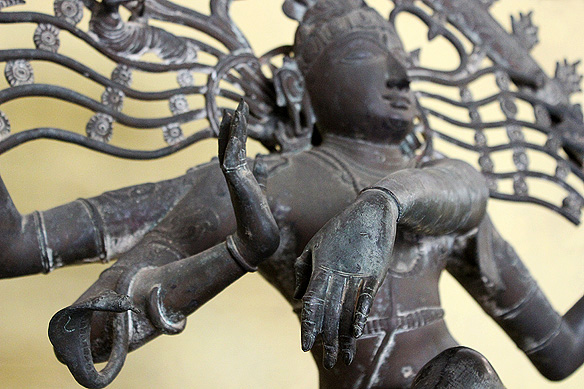 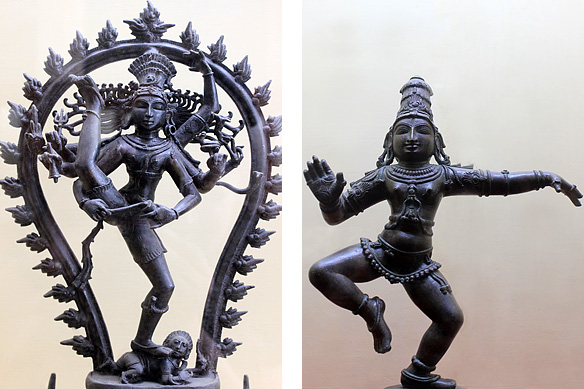 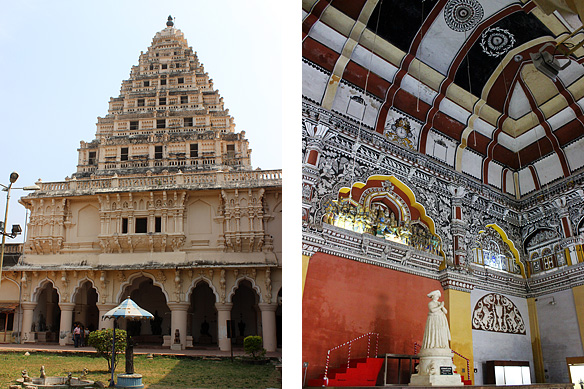 Left: The five-storey Arsenal Tower served as a storeroom for arms and ammunition in the past. On its first floor is a 92-feet, 400-year-old skeleton of a whale washed ashore at Tranquebar in 1955. Right: Raja Serfoji Memorial Hall. Raja Serfoji II, an art and literature buff, ruled from 1797 to 1832. 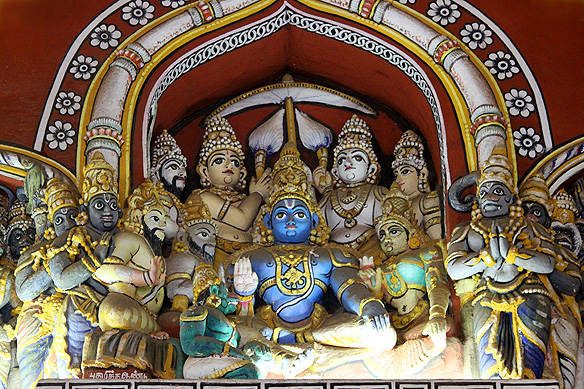 Two palaces, each unique in its own way, complete the Temple Town story. For great temples exist when there are rulers to pay for them, and the rulers have fancy homes. 🙂

7 posts. 1 week. A journey which will forever remain special to me.

In case you have missed any of my Tamil Nadu Temple Town posts, here they all are. Just click on the links below to access the blog posts. Wishing you happy travel experiences, soon. Till then, stay safe, stay healthy. ❤

17 thoughts on “palaces of madurai and thanjavur, a peek into tamil nadu’s 17th century royal lives”