The tuk-tuk rattled and heaved as we drove higher up the jungle-clad deserted hill. We were just a few kilometres north of Jaipur, yet there was not a soul around. Or any sound. Except for the chirping of the birds and my noisy mode of transport.

In the distance I could make out the Jaipur State’s flag—the famous panchranga representative of the five Afghan tribes Mirza Raja Man Singh I, the Kachhwaha Rajput ruler, defeated in 1585 on behalf of the Mughals. A gentle reminder that the fort on which it was hoisted, Jaigarh Fort, still belonged to the Jaipur royal family.

Unlike the Amer Fort, Jaigarh Fort built by Maharaja Sawai Jai Singh II in 1720 served as a military fort and a hideout for the royal family in the event of war. It’s a stark and functional piece of military architecture. But with such stories inside its walls!

Following the crowds, I soon found myself face-to-face with Jaivan Cannon, the world’s largest cannon-on-wheels of the Early Modern Era which translates to 15th to 18th Century. Manufactured at Jaigarh Fort and now on display in its own large shed, its statistics are enough to impress.

Its 6-metre-long barrel weighs 50 tons and can shoot out a 50-kilogram shot ball to a distance of around 35 kilometres. The total length of the contraption is 9.5 metres and it is beautifully decorated with auspicious Hindu symbols of prancing elephants and peacocks, and blooming lotuses.

However, its trial run in 1720 turned out to be its last. The gentleman who set it afire went deaf with the blast, the walls of the fort cracked, the surrounding village was damaged, and pregnant women living in the vicinity had miscarriages. The cannon was never used again.

Every year during Shastra Puja, part of the nine-day Navratri festivities, the royal family worship the Jaivan Cannon along with their other weapons, as they have done for hundreds of years, in an ancient Vedic ritual.

Jaigarh Fort’s second story is equally dramatic and is about Mirza Raja Man Singh I’s pillage from his Afghan conquest in the 1580s. He kept the booty secret from his ally, the Mughal Emperor Akbar, and is said to have hidden the chests full of silver and gold in undisclosed rooms under the water tank in the central courtyard.

In 1976, the then Indian Prime Minister Indira Gandhi decided to go looking for this treasure. For two days the highway was closed. 60 to 70 trucks left the premises, but the official statement claimed no treasures were found. Was there really a treasure? Was it ever found? Or was it still lying inside the fort, but maybe someplace else?

Unfollowing the crowd, I wandered through the bare palaces with exotic names and dusty royal carriages. Almost lost in winding corridors and hidden staircases, till I emerged at Jaigarh Fort’s rear end to the most stunning views. Spread out in front of me was Amer Fort and Town nestled in the green bowl of the Aravalli hills.

[Note: Click on an image to enlarge it and read the caption. Use the arrow keys to navigate through the set.] 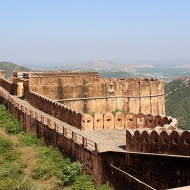 Jaivan Cannon is decorated with Vedic markings during Shastra Puja.

View from Jaigarh Fort’s ramparts. In the distance is Jal Mahal. 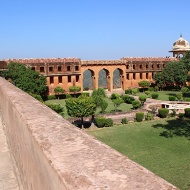 View of Sagar Lake in Amer from Sagar Chhatri. 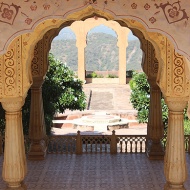 Pavilion in the palace gardens. 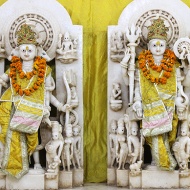 Hari Har Mandir inside the fort. On the left is Vishnu [Hari] and on the right is Shiva [Har].

Next in line for the day was Nahargarh Fort. Back into my tuk-tuk, we went higher up the hills, deeper into the jungle.

“Should I wait for you?” Raqib, my tuk-tuk driver asked me once we reached.

“No, I’ll find my way down,” I assured him and set him off with a wave.

The tarred road we took through the hills to reach Nahargarh Fort had been some 14 kilometres long, flanked with jungles, and deserted. But Google Maps professed there was a shortcut as well—a mere 2.5-kilometres-long trail to the City Palace in the old city. A half an hour walk. I sure hoped it was right.

“How many people? Indian?” The bored voice of the chap at the ticket counter broke into my reverie.

Ticket in hand, I made my way to Nahargarh Fort’s prettiest, and only palace—Madhavendra Bhawan—the handiwork of Maharaja Sawai Madho Singh II for his nine queens. Nameplates on the palace doors announced their names: Chand Prakash [Moon light], Suraj Prakash [Sun light], Anand Prakash [Content light] … Comprising of nine mini-palaces for each of the queens, they are encircled with a secret corridor which led to the king’s chamber so he could take his pick for the night without the other queens getting a whiff of it.

I suppose when you have nine spouses, you also learn to become an expert juggler. 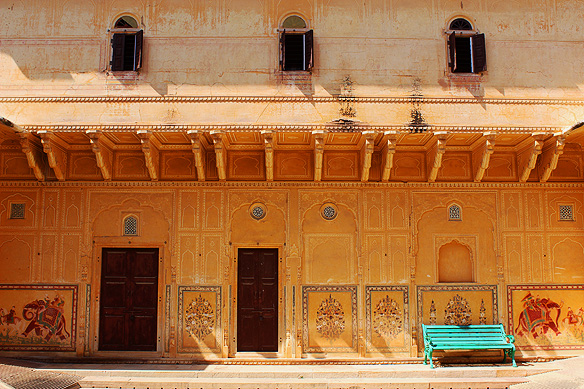 India is full of stories. Nahargarh [meaning the dwelling place of tigers] Fort is no different.

The original intended name of Jaipur’s highest and largest military structure, dating back to 1734, was Sudarshangarh. But something strange would happen every night when the construction workers left the premises. Whatever they’d built would be destroyed, and they would have to start afresh all over again next morning.

A local tantric explained to Maharaja Sawai Jai Singh II that a spirit called Nahar Singh Bhomia lived at the site. He wanted the palace to be named after him and have a temple dedicated to him. Once his terms were met, construction could carry on unhindered. Sudarshangarh, thus became Nahargarh, and a shrine containing an orange tablet with roughly pencilled in facial features was housed in one of the bastions overlooking the expanse of Jaipur spread out at the fort’s feet.

Yes, you guessed right. Construction resumed and this time there were no strange eerie hindrances.

Many a historic event has taken place within Nahargarh Fort’s walls, from treaties with the Marathas in the 18th Century to being a place of refuge for the Europeans during the 1857 Indian mutiny.

Its current claims to fame, however, are less to do with battles or kings and more to do with the scenic.

Perched on the highest hill in Jaipur, Nahargarh has some of the most magical views in Rajasthan, as I was soon to discover. Whether it be from Madhavendra Bhawan’s rooftop, the ramparts or the bastions. Vistas of stone fortifications wound their way over the hills, rising and falling in tandem with the contours of the land. The city of Jaipur glistening like a mirage under the sun in the distance. A colossal live picture-postcard. Sorry, wrong simile. It is the 21st Century. Let me rephrase it: A colossal vibrant Instagram post. 😀

Next on my rather unstructured agenda for the day was a structured guided walk through the 300-year-old water harvesting system in Nahargarh accompanied with facts and stories narrated by sustainability expert Neeraj Doshi on a Heritage Water Walk. I felt like I was inside an Indiana Jones film as I dived through the jungles and discovered channels and water catchment areas of the seamless system. Never had I found a subject like water engineering to be so much fun.

Which brings me to Nahargarh’s other claim to fame and where the walk ended. The Rang de Basanti stepwell. But I go ahead of myself.

Nahargarh Fort has three stepwells. One in particular gained celebrity status for being a location for the Bollywood film Rang de Basanti, its architecture adding to its evocative charm. Or should I say, the lack of architecture. The stepwell is actually a large scalloped hollow on the hill where stone for the fort’s construction was excavated from. 18th Century engineering genius and a clever rain water harvesting system managed to convert the cavity into one of India’s most aesthetically stunning stepwells.

[Note: Click on an image to enlarge it and read the caption. Use the arrow keys to navigate through the set.]

Detail of fresco inside Madhavendra Bhawan. 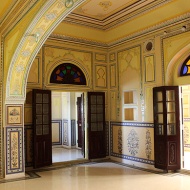 All nine palaces for the nine queens are identical and European in style.

King’s Corridor encircles the queens’ palaces and leads directly to the king’s chambers. 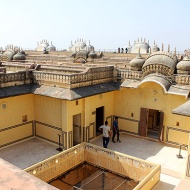 Looking into one of the palaces from Madhavendra Bhawan’s rooftop.

Looking out at the view from Madhavendra Bhawan’s rooftop.

Nahar Singh Bhomia’s shrine in one of the bastions.

The one and only celebrity Rang de Basanti stepwell.

Path connecting Nahargarh Fort to Jaipur city. Cars are not allowed on it.

The sun was setting, the shadows lengthening. It was time for me to leave.

I did find the shortcut. It went from the Rang de Basanti stepwell to the city below through a steep winding path carved out from the face of the hill. In half an hour I was at the City Palace and the hill top forts of Jaigarh and Nahargarh deep in the jungle seemed a distant land, far removed from the bustle of reality.

It also reminded me of why I blog. So that these distant lands may stay a part of my reality, even after the journey. ❤

NOTE:
You may also like to read: 15 Memorable experiences only to be had in the World Heritage City of Jaipur.

12 thoughts on “travel diaries: jaigarh and nahargarh: 2 forts and 1 traveller”