Trajan’s Kiosk at the Temple of Isis, Philae

Surrounded by the Nile River and granite boulders, the Temple of Isis at Philae was the last functioning temple of the ancient Egyptian religion and closed down in 551 AD. Built over a period of 700 years by Ptolemaic and Roman rulers who wanted to identify themselves with the Osiris and Isis cult, the temple is a magnificent blend of Egyptian and Graeco-Roman architecture.

Isis was the wife of Osiris and mother of Horus. She epitomised female qualities and was represented with cow’s horns and a solar disc, or with a throne on her head. The walls and colonnaded courts of the temple are covered with reliefs of this ancient cult.

The construction of the Aswan Dam in 1902 and the High Dam in 1965, to control the annual flooding of the Nile, threatened to completely submerge the temple under its waters. In a massive operation led by UNESCO and the Egyptian Antiquities Organization, the island of Agilkia was reshaped into the exact replica of Philae and the Temple of Isis, Hathor and Trajan’s Kiosk were relocated to their new, drier ground in 1980.

A light and sound show held in the evenings brings back to life under starry nights a forgotten cult as Isis speaks to us about herself, Hathor ‘House of Horus’—the cow-goddess of love, joy and music who later became Horus’ wife—and the temple itself.

Isis epitomises the Divine Mother, the Great Mother of All Gods and Nature, and the Goddess of a Thousand Names. She was the wife and sister of Osiris. According to ancient Egyptian mythology, Osiris was born a God but grew up as a man and is credited with civilising Egypt and organising agriculture. He became King and Egypt flourished under his rule. His brother Seth, however, became jealous and trapped Osiris in a coffin and threw him into the Nile. The coffin floated into the sea and washed ashore at Syria. Isis eventually found him and brought him back to Egypt where she and her sister Nepthys, Seth’s wife, mourned him. Isis managed to revive him long enough to be able to conceive their son Horus. When Horus grew up, he avenged his father’s death in a struggle with his uncle to gain control of the Kingdom on earth. He then fed one of his own eyes to Osiris, guaranteeing his father’s immortality. Resurrected, Osiris became the judge of the dead in the underworld.

Temple of Horus the Elder and Sobek, Kom Ombo

The sandstone Temple of Kom Ombo faces the Nile River; the combination of stone, sun and flowing water echoing the Hellenistic response to light.

Unusual in design, it is dedicated to two gods: the left side to Horus the Elder, and the right side to Sobek, the crocodile god. A small chapel contains mummified crocodiles that were found in a cemetery nearby. The temple was started by Ptolemy VI (180 BC) but most of the work was done by Neos Dionysus (80-51 BC). The hypostyle hall has lofty columns with floral capitals and a ceiling decorated with vividly coloured flying vultures. Fine reliefs of Neos Dionysus’ coronation by the ancient gods, Ptolemaic kings making offerings to the gods, and temple rituals decorate the inner walls. The most interesting of the reliefs are scenes displaying medical instruments used by the Egyptians 2,000 years ago, confirming the sophistication of the Egyptian surgeons. 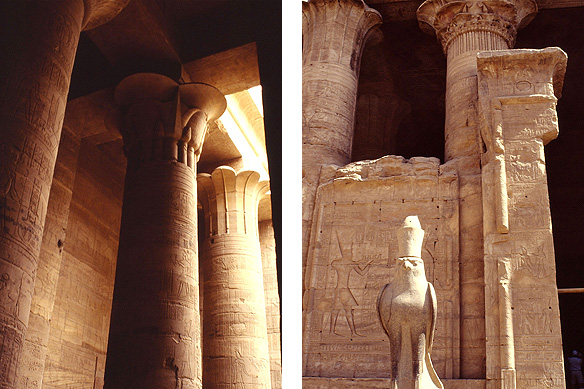 Temple of Horus, the falcon-headed god, at Edfu is Egypt’s best preserved monument from antiquity

After Karnak, the Temple of Horus at Edfu is the largest temple in Egypt. It is also the best preserved as until the 1960s it was completely buried under sand. Dedicated to Horus, the falcon-headed god, the temple is built on a site inhabited since the Old Kingdom (2686-2160 BC) and believed to be the location where Horus fought with his Uncle Seth for control of the world. The temple was built by the Ptolemies during 237-57 BC.

The temple faithfully maintains the traditions of pharaonic temple architecture and the walls are covered with inscriptions of foundation and building texts and reliefs of Ptolemaic kings and Egyptian gods. The format of the temple is largely intact giving a clear idea of what ancient temples looked like in their entirety. The massive pylon with reliefs leads to the first Hypostyle Hall, which further leads to the Second Hypostyle or Festival Hall. Beyond is the holy-of-holies, the inner sanctuary, where the statue of Horus was believed to have been inhabited by God. It once contained Horus’ sacred royal barge, a copy of which is contained in the room behind it.

Operating between Aswan and Luxor, and stopping at Kom Ombo, Edfu and Esna on the way, the Nile cruise usually lasts 3-4 days. The cruises often include all meals, as well as guide services. Taking the Nile cruise is similar to stepping back in time, into history, to a civilisation that still lives on in the little villages of mud-brick houses on the banks of the Nile, and temples dedicated to gods and goddesses of a religion long forgotten.