Tashilhunpo Monastery, the seat of the Panchen Lama

Tashilhunpo Monastery, meaning ‘Heap of Glory’, is the seat of the Panchen Lama, the second most important spiritual leader of Tibet and was commissioned in 1447 by His Holiness the 1st Dalai Lama, Gyalwa Gendun Drup. The abbots of Tashilhunpo came to be known as Panchen, because of their scholarly reputation. The title Panchen derives from the Sanskrit word Pandita, which means ‘scholar’, and the Tibetan term Chen Po, which means ‘great’.

One of the four great monasteries of Central Tibet, Tashilhunpo was supervised and looked after by the Dalai Lamas and Panchen Lamas of the Gelugpa (Model of Virtue), or Yellow Hat sect founded by Tsongkhapa in the late-14th Century. Tsongkhapa had wanted to establish an order that was strictly disciplined and scholarly. The Red Hat sect opposed the hegemony of Gelugpa, but the latter emerged as the leading order in Tibet, with the Dalai Lama as its head, and remained the supreme power until 1959.

Tashilhunpo rose to its current prominence after the 5th Dalai Lama declared his teacher—the abbot of Tashilhunpo—to be the manifestation of Amitabha (Buddha of the Western Paradise) and that he would continue to be reborn in an unbroken lineage of successors. The abbot was named the Panchen Lama and the lineage of the Panchen Lamas was instituted at the monastery. During the period between the 4th and 6th Panchen Lamas, Tashilhunpo graduated from being Lhasa’s political partner to its rival for power and was developed and expanded to a level of architectural grandeur befitting its political, economic and spiritual significance.

The antagonism between the Gelugpa centers in Lhasa and Shigatse came to a head during a dispute between the 9th Panchen Lama and 13th Dalai Lama in the 1920s. Tashilhunpo, inspired by the political disbanding in China, felt sufficiently strong to refuse the Tibetan central government’s demands for tax revenue. As a result, the Panchen Lama, however, had to flee to China, where the 10th Panchen Lama likewise spent most of his life. Although the monastery was dissolved in 1960 by the Chinese authorities, it has now been revived with 800 monks studying for the traditional geshe exams. 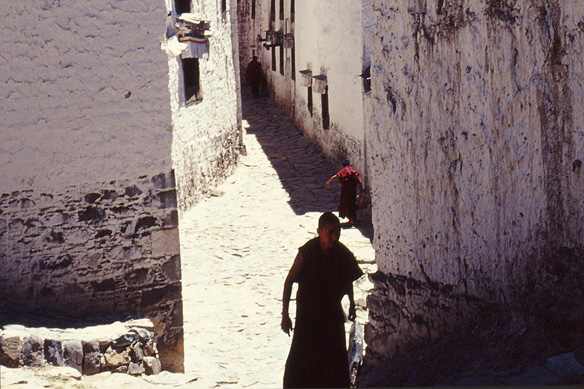 Amidst whitewashed walls and labyrinthine lanes …

At its height, the labyrinthine Tashilhunpo monastery had over 4,000 monks resident in its four tantric colleges, each headed by its own abbot. It was these four abbots who, after the death of the Panchen Lama, were responsible for the search for his reincarnation.

The Thangka Wall sits northeast of the monastery and is 35 meters in height and 40 meters in width. Built in 1468, it was a memorial monument to commemorate the birth, nirvana and initiation into Buddhahood of Sakyamuni. Every year on the 5th month of the Tibetan calendar, gigantic thangkas of the past, present and future Buddhas are displayed on the wall over a period of three days.

Dormitories for the monks surround the entire complex. The general assembly hall is the oldest part of the monastery and contains the throne for the Panchen Lama. Taking 12 years to complete, the hall has 48 pillars and can seat up to 2,000 monks. In the main chapel is an eight meter high statue of Sakyamuni.

Common effigies around the monastery include those of Tsongkhapa flanked by the 1st Dalai Lama and 1st Panchen Lama; the three Buddhas—Avalokiteshwara (compassion), Manjushri (knowledge) and Protective Buddha; and Manjushri on his own holding a sword in one hand and the holy scriptures on a lotus in the other. Also of interest is the swastika which is used as a Buddhist symbol for good fortune. When portrayed with anticlockwise extensions, it is considered a Bon symbol. Guardian kings guard Buddhist chapels and are depicted holding the mouse, zither, snake and stupa, and dorje respectively.

I spent much of the day walking around the monastery, happily clicking away with my camera. It is a completely different world within these walls.

Later in the afternoon I left for the Panchen Lama’s summer residence on the other side of town which was built in 1844 by the 7th Panchen Lama and was added to by the 8th, 9th and 10th Panchen Lamas. The 10th Panchen Lama died in this palace. Two chapels are open to the public. They are the meditation hall where the Panchen Lama used to meditate and hold tantric sermons and the hall where he philosophized. The large audience hall above is a riot of colour and contains a throne covered in white scarves (Kha-btags or Hada). The bright ochre painted walls, the chandeliers, the paintings on the roofs, all exude an emptiness; an aura of a time gone by, a time now forgotten, and never to return.

The road to Lhasa …

The journey from Shigatse to Lhasa is the very antithesis of the road earlier taken. Though only a mere few hundred kilometers away, the dirt road in this instance passes through sparkling springs and emerald-green fields lining rocky hills which give way to mountain ranges cloaked in ice. The whole landscape is just beautiful. Further on, I drove through snow-capped mountains, valleys embossed with white chunks of ice and forest lichen, magnificent black-haired yaks grazing but an arm’s length away, and silver stretches of the Yarlung river. And as I went higher through the mountains I entered yet another world, this time a land of crystal ice and glittering blue skies. And the mountains then gave way to golden grasslands edged with blue grey peaks.

I met countless nomads on the way. I’d look at the hill yonder and think I saw an outcrop of rock, and then in a flash a wide-eyed grimy face would be gazing at me in curiosity instead. Taken aback I looked once more, only to find those eyes had disappeared again. And at other times I’d find myself surrounded by nomads, tugging at my arms, looking at me with much warmth and feeling. I would just empty my backpack then, giving them whatever food I had with me. How I wished that day I had more to give to these wanting, yet strangely content souls.