5:30 a.m. and the Mount Mary Basilica opens its doors to the world with bells ringing from its grey stone clad towering twin towers. It’s a beautiful wake up call. Beats any alarm clock any day. 🙂

Bandra’s soul lies in its centuries-old Portuguese churches dotted around its four square kilometers. In the 16th Century, the Portuguese Jesuits were given ownership of Bandora, as it was then known, leading to six parish churches working zealously, right up to present times, towards meeting the spiritual and communal needs of its inhabitants.

Three churches meet me everyday… on my evening walk, to the grocery store, or running an errand. The sacred, the timeless, and the communal: The three faces of the churches of Bandra, that I see almost daily.

The Sacred…
The Basilica of Our Lady of The Mount is Bandra’s crowning glory. Perched atop a hill near Lands End, it was originally a simple mud oratory (1570) for private prayer which has morphed itself into a grand semi-Gothic edifice (1904). Deep in its sanctum sanctorum is the 16th Century wooden statue of Mother Mary, brought from Portugal by the Jesuits and believed to have miraculous healing powers. People from all faiths, ages and social strata pray to her, like me, joining in the Mass or simply sitting in silence surrounded by fiberglass murals recounting the life of Mary, looking for answers and at times for questions, in gratitude and at times in yearning. 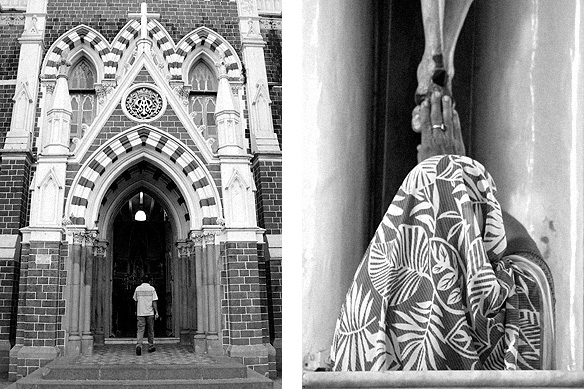 The semi-Gothic main entrance of the Basilica; A woman in prayer inside 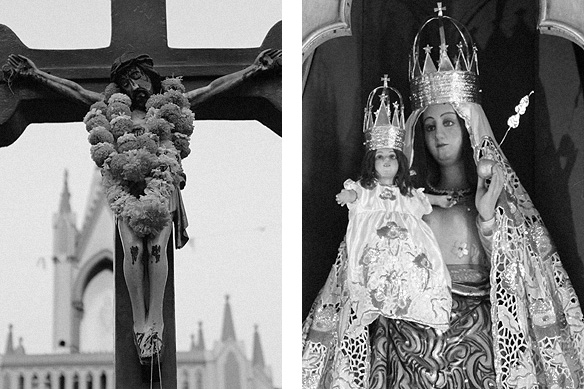 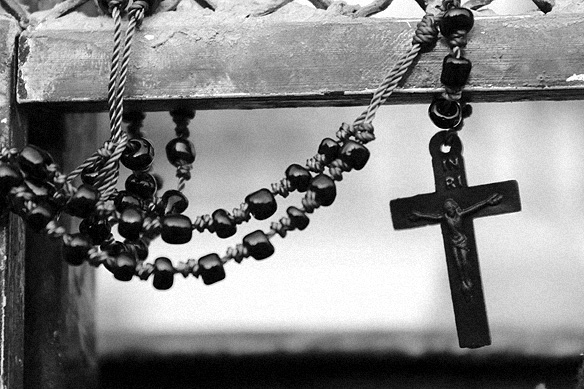 A prayer to Our Lady of The Mount

The Timeless…
Down the hill, snugly holding on to the tail end of Bandstand is the oldest church in Bandra, Saint Andrew’s Church, dating back to 1575, and emanating a sense of ‘forever’-ness in its serene white washed walls. The church still has its original wooden side chapels, pulpit and hangings painted in popular Portuguese style. In its compound, amidst silent graves, stands the largest and oldest cross in Bandra carved from a single stone and engraved with 39 emblems of the passion of Christ; 150 other crosses are scattered over the area, many built to ward off the plague epidemic (1896-1906).

The Communal…
In contrast is Saint Peter’s Church on Hill Road where I am consistently met with conversations, beaming smiles and invitations to festivities. It is a communal church, perhaps, having been stripped of any cavernous history (Origins – April, 1852; The current building was built in September, 1938), stained glass windows made in China by a Jesuit laybrother, and the capacity to hold over a 1,000 people at a time. Consecrated in 1964, awarded the Urban Heritage Award in 1995, the church is the site of funerals, weddings, shared emotions – and a sense of community. 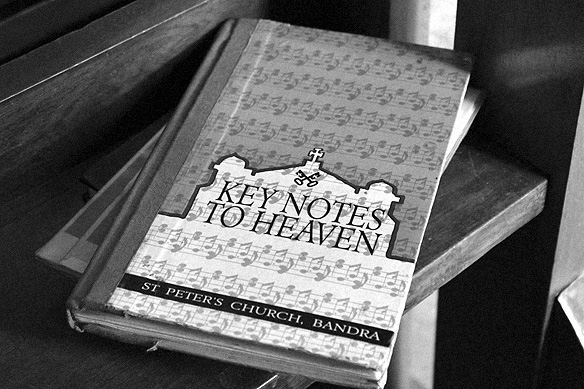 4 thoughts on “churches of bandra”