Trimurti or Sadashiva – The Creator, The Protector, The Destroyer

Some 10 kilometers into the Arabian Sea, off the coast of South Mumbai, is a verdant island covered with five 7th Century rock cut temples dedicated to the Shaiva Hindu sect. Known as Elephanta Island and originally as Gharapuri, literally meaning the ‘city of caves’, its basalt rock hewn temples pay homage to the various forms and legends of Shiva.

Every time I have set myself to ‘discover’ Mumbai, it has consistently included a visit to the Elephanta Caves. 25 years ago. And in my present chapter in this city too :). Thus, on one sun-drenched afternoon last month, I took myself off to the Gateway of India, to catch a ferry to this pocket of Mumbai’s history.

A Hindu place of worship till Portuguese rule in 1534, the island was renamed after a gigantic statue of an elephant which used to stand at the entrance, by the new rulers. Today, the carving is at Byculla.

I walk through the porticoes and the first to hold my gaze is the 20 feet high Trimurti or three-headed Shiva across the cavern, at the very south end, representing the three essential aspects of Shiva – creation, protection, and destruction. As I wander amidst the basalt pillars a huge Shiva lingam in the central shrine meets me next. The stone walls, as if vying with each other, jump to life with carvings of Shiva, over 16 feet high. There is the Ardhanarisvara, half-man, half-woman representation of Shiva, and Gangadhara, denoting the river Ganges’ descent from Shiva’s matted locks, both resplendent in graceful detail.

Further tales of Shiva are recounted as I explore deeper – the Kalyanasundaramurti depicting Shiva’s marriage to the goddess Parvati, Andhakasuramardana the slaying of the demon Andhaka by Shiva, Shiva and Parvati on Mount Kailash (the abode of Shiva), and Ravananugraha portraying the demon-king Ravana shaking Kailash.

Every now and then the crowds would thin out and I would be alone in the company of the 1,300 year old reliefs. Some believe that these carvings are not man-made; there is no clear cut attribution to the carvings and various dynasties have been accredited by various historians. A designated UNESCO World Heritage Site, four of the five Hindu temples were extensively defaced by the Portuguese. The Great Cave or Cave 1, somehow survived and was restored in the 1970s.

A visit to the Elephanta Caves is often considered mandatory on any Mumbai darshan. It is not the only set of rock hewn cave temples in the city. There are also the Jogeshwari, Kanheri, Karle and Mandapeshwar caves. But the Elephanta caves are definitely the most majestic and beguiling.

The Pillared Shiva Cave or the Great Cave

The Shiva linga shrine with Dvarapalas at its doorways

The Shiva linga itself 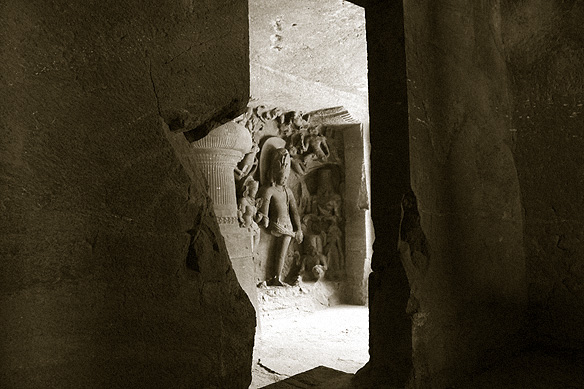 Panel depicting Kalyanasundara: the divine marriage of Shiva and Parvati with Brahma, Vishnu, Indra and other divinities in attendance 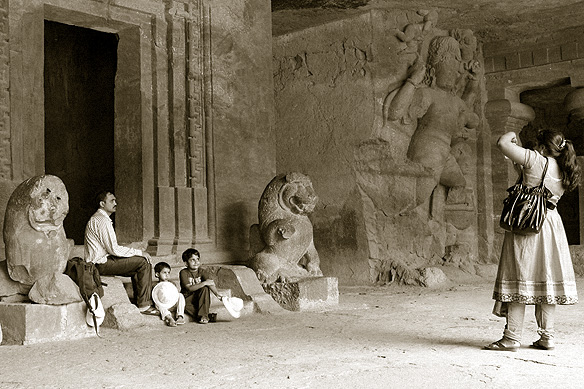