Above: The Soni family temple

Every day as I set off to explore one corner or another of Kutch I would pass a dazzling white edifice in Bhuj, my base during my travels in north-west Gujarat. And my eyes would hold on to it, till it disappeared from sight. It was the Swaminarayan Temple of Bhuj. I knew I could not leave without visiting it. Call it faith. Call it the traveller’s call. But I found myself waking up at the crack of dawn this morning and finding my way towards it.

I got lost. I went around in circles! And in the course I stumbled upon an 18th Century family temple dedicated to Shiva, belonging to a Soni family; the extended families living in miniscule quarters around the temple courtyard.

Across the road, the grand, ornate Swaminarayan Temple in marble and gold shimmered in its glory. I was in time for the morning prayers held within the inner sanctum … It was exquisite, more so up close and around me, the morning light filtering in through the carved pillars and amongst the devotees. Hinduism and Gujarat are virtually synonymous with each other—89 percent of the state’s population is Hindu and of these most belong to the Swaminarayan sect. The Shri Swaminarayan Mandir or Swaminarayan Temple was built by Swaminarayan (1781–1830) himself, founder of the Swaminarayan Sampraday, back in 1823. The original structure was destroyed by the 2001 earthquake that racked the region, and replaced with the current one in 2010 constructed using traditional Vedic architectural methods. 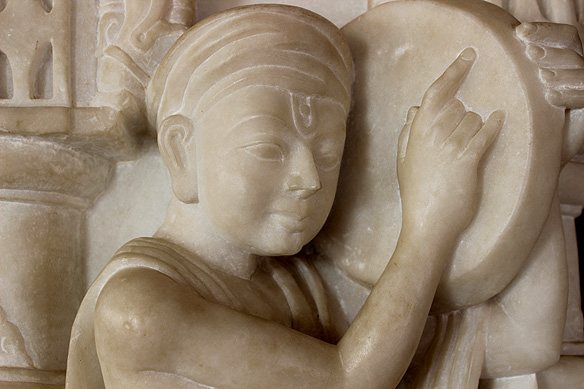 … Carvings cover every surface inch. Above: Ganesh, the remover of obstacles, and stories from the Ramayana and Mahabharata

… Divinity in magnificence. Ceiling, wall, and detail, all in white marble and gold

The temple, like most Swaminarayan temples is dedicated to Nara-Narayana, a Hindu deity pair consisting of Nara, the human soul and eternal companion of the Divine Narayana (Vishnu). The Mahabharata refers to Krishna (an avatar of Vishnu) as Narayana and Arjuna–the protagonist of the epic–as Nara. The legend of Nara-Narayana is also recounted in the scripture Bhagavata Purana.

Followers of the Swaminarayan sect believe that their founder Swaminarayan is an incarnation of Narayana, the Supreme Being and superior to other deities. Swaminarayan himself is said to have installed the idols of Nara-Narayana dev and his own form, Hari-Krishna Maharaj, in the sanctum sanctorum of the temple. These are now housed in the new temple. Interestingly, women are not allowed inside or near the innermost chambers; they are fenced out by a barricade.

Swaminarayan had 1.8 million followers when he died in 1830. By 2007, it had risen to 20 million followers. When the original temple was destroyed in 2001, his followers living in Kutch and abroad rebuilt it at a cost of 1 billion Indian Rupees. 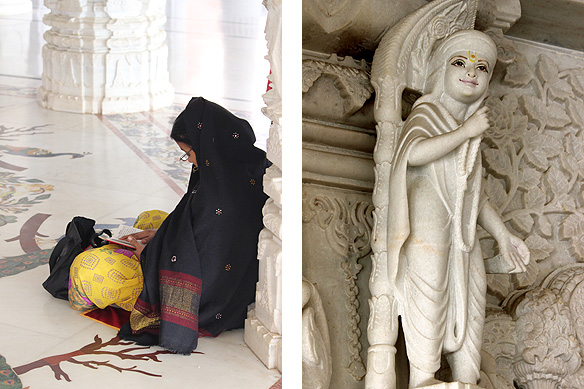 I pray. I am prayed to. I pray to the divine for my mortal self 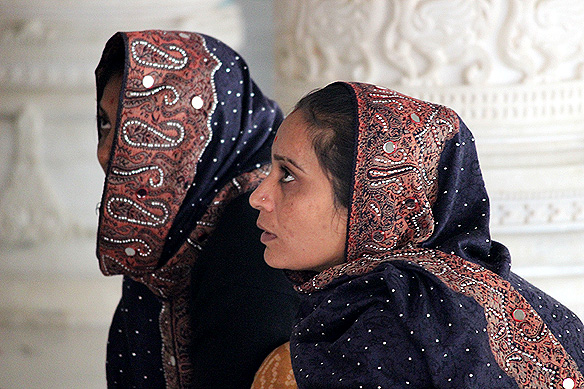 If you are a devout follower of the Swaminarayan sect, the temple cannot fail to impress with its divinity. And if not, the temple still charms in sheer unadulterated artistic loveliness. As it did for me. 🙂

10 thoughts on “temples of bhuj: the grand and the familial”