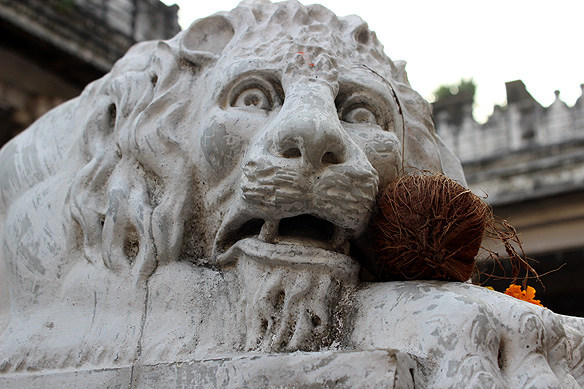 Perched on a hillock in the heart of Bombay, behind a rather inconspicuous entrance is the 200-year-old Babulnath temple dedicated to Lord Shiva.

I hadn’t done much exploring in the city in the last couple of months (as you may have figured from my blog) and was antsy to start digging deeper again. Mention of the Babulnath temple cropped up whilst I was compiling an itinerary on ‘Mumbai in 48 hours’ for my sister’s very first time visit to Mumbai. I wanted to show her the touristy, as well as the local everyday sights. The temple, near Girgaum Chowpatty, I was told had to be in that list. Now was I going to wait till December to see it myself?? Haha. No ways!

So I found myself one late afternoon last week staring up a flight of 200-odd steps, and with every step leaving behind the noise and chaos of this city I have started to love so much, towards a serene slice of time a couple of centuries back.

[Note: If you don’t want to take the flight of steps, don’t fret. There is a lift service at a nominal charge of Rs 1. But may I recommend you climb up and down. It just enhances the whole experience.]

To get back to my visit, the temple is an architectural treasure in marble and limestone covered with intricate carvings of scenes from Hindu mythology. Its highlight, both in terms of spiritual significance, as well as historical and legendary value is the lingam in the inner sanctum.

The lingam is usually placed in the yoni, a symbol of female creative energy and the goddess Shakti. The union of the two, Lingam and yoni, represent, according to scholars the “indivisible two-in-oneness of male and female, the passive space and active time from which all life originates.”

And that dear reader, is just the crust of the multiple strands of spirituality in Hinduism.

On to more pragmatic facts, which are no less fantastical, the history of Babulnath temple goes somewhat as follows:
The Shiva lingam, the main deity in the temple in the form of the Lord of the Babul tree, and idols of Ganesh, Hanuman, and Parvati were consecrated in the 12th Century by Raja Bhimdev, the ruler of the region. However, over time, the original edifice fell into disrepair. The idols were unearthed in the 18th Century leading to a temple rebuilt at the site in 1780 under the patronage of Hindu merchants and the Gujarati community despite much opposition from the Parsi community who owned the area then.

There is another side to the story, as it often is, namely, its legend:
According to legend, the temple surrounds comprised pasturelands in ancient times. Pandurang, a wealthy goldsmith and land owner, used the pastures for his cattle to graze on. The cattle were looked after by a cowherd named Babul. One fine day the goldsmith discovered that one of his cows, Kapila, was pouring out her milk at a particular spot as abhishek. When dug, the spot unearthed a Swayambhu underneath—a natural Shivling or Shiva lingam in black stone around which the current temple was then built.

The temple today:
The present Babulnath temple dates back to a later version built in 1890 by the Gujarati community [once again] and Maharaja Sayajirao Gaikwad of Baroda state. Much of its fame is recent. In the initial days, the temple was used mainly by yogis partaking in bhang and ganja.

Large numbers of the faithful come to this quaint quiet temple overlooking the city on Mondays, Mahashivratri and the month of Shravan. Tourists visit rarely. And people like you and me ramble through its midst to learn a bit more about ourselves for the only way within is when we explore the world around us a tad deeper. 🙂

I think the Babulnath temple makes for a pretty neat inclusion in the 48 hour itinerary for my sister. Don’t you think so too? 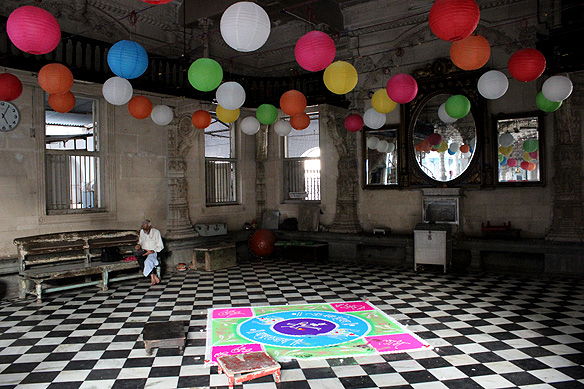 I loved this open hall, all decorated for the festive Diwali season 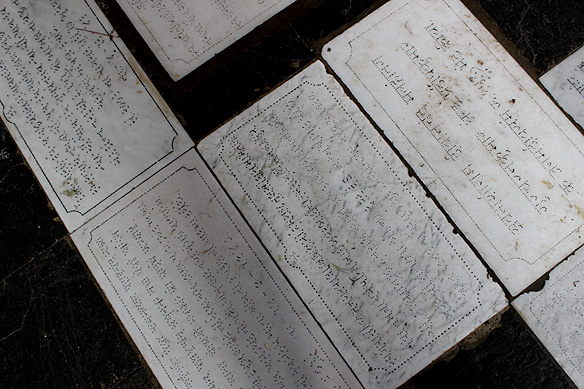 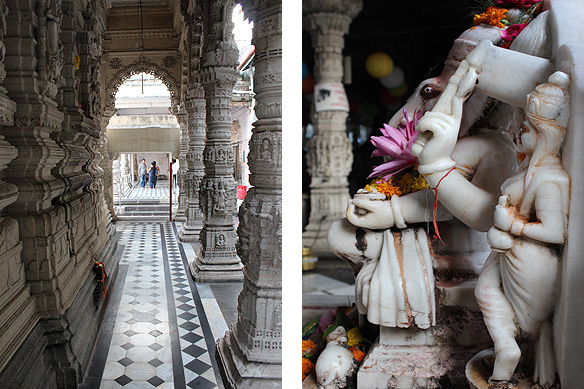 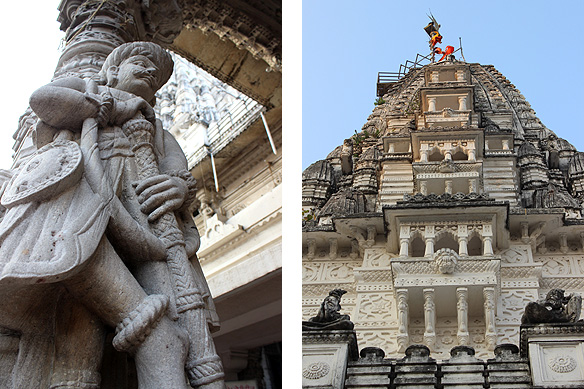 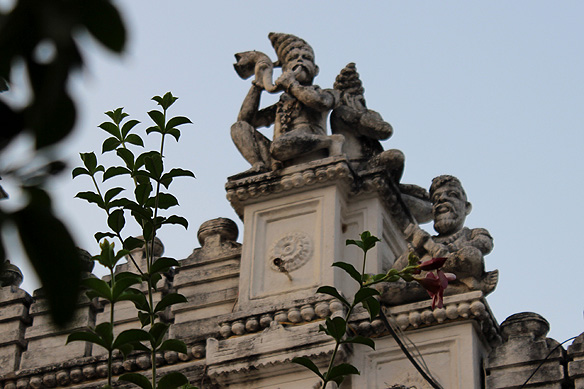 Poetry in stone, on myths and gods, the quirky, pragmatic and divine 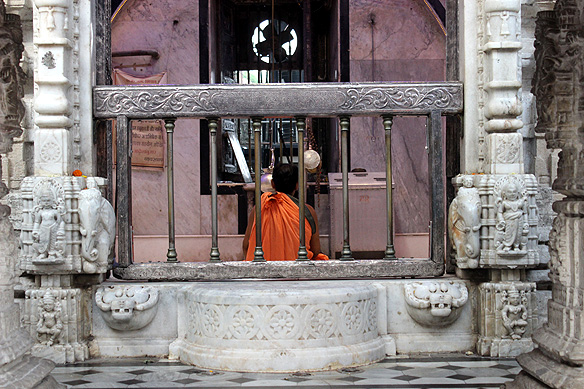 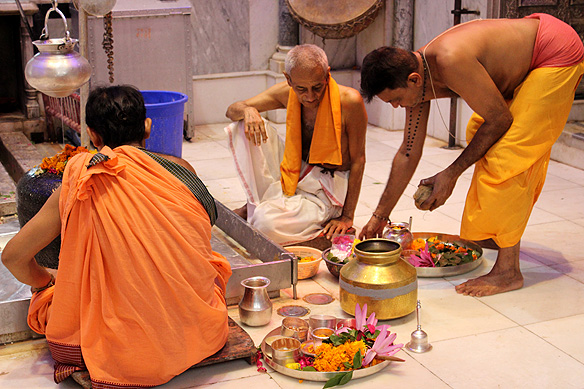 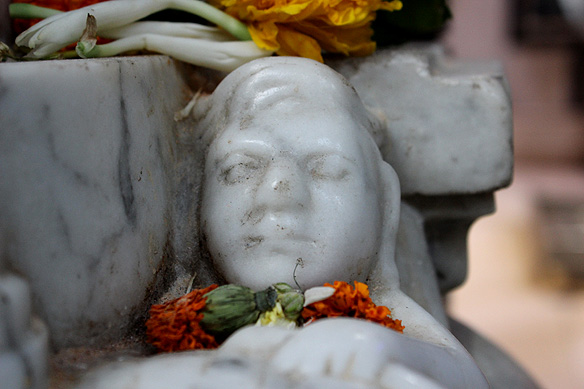 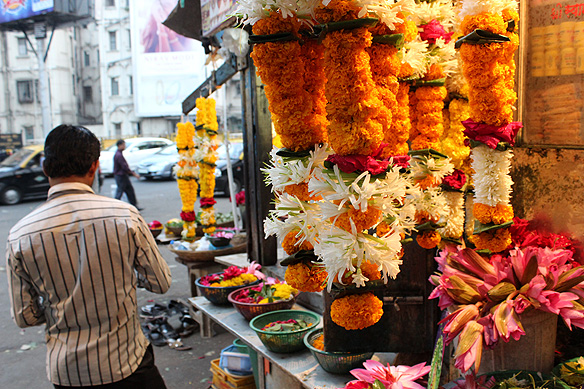 Flowers from the faithful and another day of conversations with life, ends