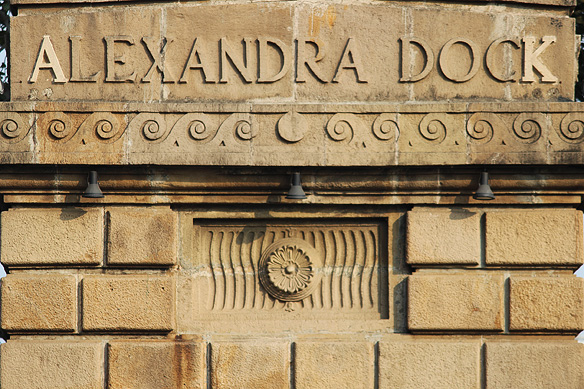 Though an avid proponent for guided walks, I love self-guided walks just that tad bit more. They are like a treasure hunt filled with the thrill of discovery! Don’t you agree? As one decodes a route and identifies details, a place takes on an added meaning. From then on, it is never just another precinct, another site, discovered and rapidly forgotten. You start to recognise its finer nuances, unveil layers, and imbibe a bit of its soul. Such was how I explored Ballard Estate a few days ago.

To many in Bombay aka Mumbai, Ballard Estate is just another business district, the chief differentiator being “London-like.” London-like? Yes, that’s the catch word!

Whilst the rest of the city, and in particular, the adjoining Fort area is Victorian-Gothic in style, with its associated chaos, Ballard Estate is serene and uniform. A meticulously planned, purpose-built district by Bombay Port Trust, Ballard Estate is the coming together of two urbanisation concepts in the period between 1914 to 1918. These are: 1) Twenty-two acres of reclaimed land using excavated rock and soil from the creation of Alexandra Dock, and 2) the aesthetic design sense of architect George Wittet.

The precinct is best explored on foot, on a Saturday afternoon, sans the office crowd and traffic. Instead you will have youth playing cricket matches bang in the middle of the streets for company, and be able to get a table at the famed Britannia & Company without much ado. Add to that a leisurely stroll steeped in heritage and you have a pretty good mix. 🙂 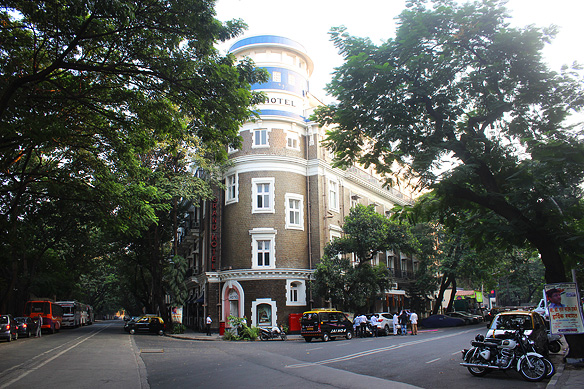 Built in 1926 by Shapurji Sorabji Engineer, the colonial Grand Hotel is one of the two which formed part of the original precinct plan. The place to stay for the rich and famous in the 1930s to 1950s, it was designed by George Wittet, Mumbai’s most celebrated architect at that time—Wittet also designed the Gateway of India and Prince of Wales Museum, now the Chhatrapati Shivaji Maharaj Vastu Sangrahalaya.

Further down the road lined with huge banyan trees is the whitewashed art deco Karfule Petrol Pump. It was built in 1938 by Caltex and has been run by the Sequeira family since its inception. If you get a chance, do have a quick dekko at the original Terrazzo art deco flooring in the office. It is lovely. Check out this interesting read to know more about Karfule and its history. 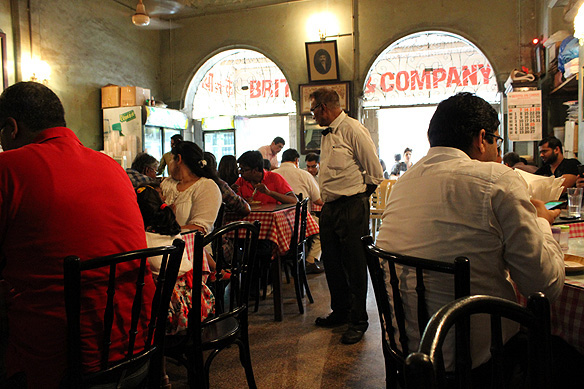 The 1923 Iranian restaurant founded and run by the Kohinoor family is Ballard Estate’s, and in fact South Bombay’s, jewel in the crown. Virtually unchanged from when it was set up 93 years ago by Rashid Kohinoor, its peeling paint, crystal chandeliers and Polish Brentwood furniture is evocative of another era. Britannia’s signature dishes: Berry Pulav, Caramel Custard, and Rosy Raspberry. The restaurant is closed on Sundays.

If you were not rich and famous around 60 years ago, you would most probably not have been able to land a room at the Grand Hotel. Plan B would be a room at the Regent Hotel which was once housed in Darabshaw House, the lovely edifice to your left as you face the WW1 Memorial, and now an office building.

A Doric sandstone column, decorated with brass plaques on three sides, stands in silent homage to the role of the Bombay Port Trust during WW1 (1914 – 1918) and its employees who died whilst serving the allied forces. A plaque reminds us: “1,870,000 troops and personnel embarked and disembarked at the docks … and 2,228,000 tons of military stores were shipped from the port.”

Turn left into N Morarji Road at the WW1 Memorial.

Bombay’s oldest photo studio, Hamilton Studios was set up by Sir Victor Sassoon in 1928 as the official photographer of the Bombay Presidency, and bought over in the 1950s by Ranjit Madhavji. The Who’s Who of Bombay’s modern history have had their official portraits taken here: from British royalty to the lords and ladies of the Raj, to India’s founding industrialists to its Bollywood stars. If you would like one taken, it starts at Rs. 2,500 per picture.

Walk down the road and at the end turn right into Walchand Hirachand Road.

Ballard Pier was the main passenger ship terminal of Alexandra Dock. Now called Indira Dock, its earlier name was in honour of Princess Alexandra, the youngest granddaughter of King George V and Queen Mary. During the British Raj, Ballard Pier used to have a railway station called “Mole” where British troops could catch trains straight to different parts of the country. INS Vikrant, the Indian Navy’s first aircraft carrier was parked at this pier before it was dismantled in 2014 after 71 years of use.

Two buildings in particular, one at each end of the street, take you back a hundred years and into London in a flash. The first is the sandstone Mackinnon, Mackenzie & Co. offices (1920), a leading shipping firm during the British Raj, and the very first edifice to be built in Ballard Estate. The company was founded in 1847 in Calcutta by two Scotsmen. The second, at the other end, is the domed Marshall & Sons building [the Indian offices of the British engineering firm]. It was built in 1905 in the Edwardian Baroque style and is topped with statues of Britannia holding a trident, the company’s emblem, and seated lions. 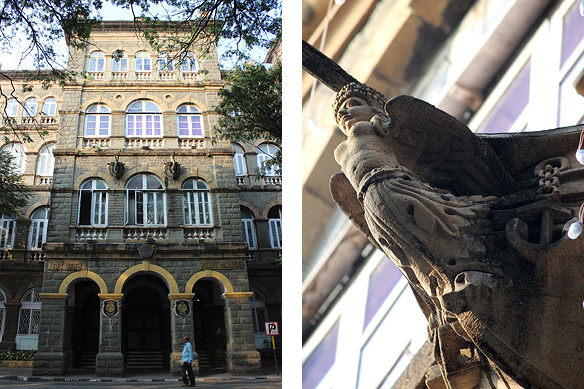 A key player in the emergence of Bombay as the commercial capital of India was the Bombay Port Trust (BPT), now Mumbai Port Trust, set up as a corporation on 26 June, 1873. Its founding chairman was Colonel Ballard after whom the Estate is named. The headquarters of BPT on S Vallabhdas Road, designed by George Wittet, is notable for its two boats carved on the basalt facade making for an interesting detail.

Once you reach the end of S Vallabhdas Road, turn back on the same road and take the first left into R Kamani Road.

The Prince of Wales Seamen’s Club dates back to 1837 when the Bombay Sailor Friends Association started at Dhobitalao. The current building, to your left, was opened by H R H The Prince of Wales, on 20 November, 1921. The Club aims “To provide for the accommodation, recreation, and general welfare of seafarers of all ranks and nationalities that are either in Port or transiting through Mumbai.”

As you walk further down you pass Neville House to your right, the original offices of Bombay Dyeing, established in 1879 and the flagship company of the Wadia Group. The Wadia Group was founded by Loeji Nusserwanjee Wadia in 1736 when he set up a marine construction company to build ships for the British. Wadia was one of India’s first master shipbuilders and a pioneer of the global shipbuilding industry.

Ahead, in a narrow side lane by the name of Goa Street is St. John the Evangelist Church, a nondescript yet peaceful place of worship built in 1963. The church is closed in the afternoons and opens for prayers in the mornings and evenings.

Located at the end of R Kamani Road, Construction House was built by the Walchand Group founded by industrialist Walchand Hirachand Doshi (1882 – 1953). Doshi set up India’s first modern shipyard, aircraft factory and car factory, amongst others. Look up, and you will notice panels of fine carvings in the art deco style depicting construction scenes.

And with this we come to the end of the walk, a wee bit wiser about Mumbai. 🙂

Note: My above self-guided walk was arranged by Khaki Tours as part of their Urban Safaris launch. It took me about an hour and was 2 kilometres long.