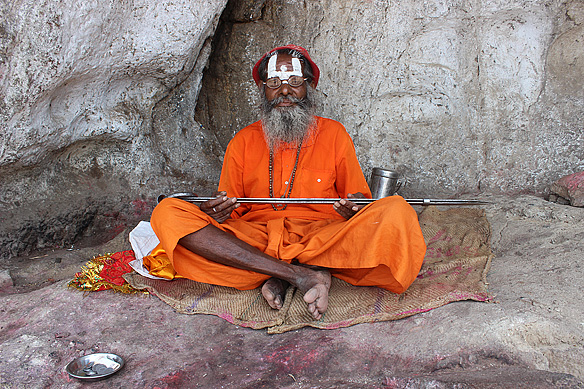 I have a book titled Speaking Stones World Cultural Heritage Sites in India which I must confess is my most prized possession. Coming to terms these past few months with some harsh realities on death and the transience of life, I reached out to the hard bound volume on my bookshelf to see what I could add to a wish-list to make come true.

The pages opened, almost as if urged by some mysterious calling, on Champaner-Pavagadh. Truth be told, I had never heard of the place before. But it was nearby and seemed doable over a few days. A friend pointed out the weather was all wrong for the rendezvous: “No one travels for pleasure to Gujarat in May when temperatures are soaring at 43 degrees.” The little voice in me said, “Who cares about the heat. Remember life truths!” 🙂

And, thus, one fine early morning, I found myself boarding a train to Vadodara, my base for my explorations. What I learnt and saw and experienced in the ensuing days far outweighed my expectations. But I run ahead of myself. Let’s start at the beginning.

Much of India’s chequered history over the past one thousand years has revolved around the turbulent relationship Hinduism and Islam share with each other. Time and again dynasties under the two religious mantles have gone into battle, wiping out traces of the vanquished completely in the process. It has been almost mandatory to erase the past if it was built by those who believed in another god.

But in one remote hill called Pavagadh, rising above the plains in Gujarat, and its immediate surrounds by the name of Champaner, history recounts a different story—a story different enough to warrant its inclusion as a UNESCO World Heritage Site in 2004.

Pavagadh is the Hindu side of the story where a shakti peetha, multiple myths, Jain temples, and Rajput forts meet, all intact. In Champaner, 500-year-old towering yet exquisite mosques from the Gujarat Sultanate lie scattered. Together, they form a timeline from the 8th to the 16th Century. Most Indian travellers do not go beyond the demarcated path to the temples. Foreign travellers rarely explore outside the sign-posted mosques. Either way, part of the story is often missed.

It is a bit difficult to separate fact from fable in Pavagadh, and therein lies its charms. As per one myth Rishi Vishwamitra once lived here near a deep ravine. He had a cow blessed with a limitless supply of milk called Kamadhenu who fell into the gorge one day. The cow was luckily able to flood it with its milk and swim out. But to ensure there was no repeat accident, Vishwamitra appealed to the gods and Hanuman was duly sent with a piece of rock to fill the gorge. The rock, however, turned out to be too big and a quarter [pav] of it was left jutting out leading to the name Pavagadh.

Another story, and one more popular with Hindu devotees, asserts the hill is Sati’s right toe, and one of the 51 shakti peethas sanctified by the goddess Shakti, the divine feminine energy. Sounds confusing? Let me explain. Sati is said to have committed suicide because her father repeatedly refused to accept Shiva as her husband. On hearing of her death Shiva, overcome with grief and carrying her corpse in his arms, danced the tandava recklessly all over the universe. Vishnu had to hurl his discus, the sudarshan chakra, to stop him. In the process the discus sliced Sati’s body into 51 parts which fell all over the sub-continent. And wherever a part of her fell, it became holy ground.

Did I tell you it was 43 degrees Celsius? Despite the dizzying heat, I passed thousands of people climbing up the steep, winding 2,000 steps to the Kalika Mata temple at the summit for darshan. Some even make the journey on their knees. The figure increases to a 100,000 daily during festivals. It is all about faith, I guess.

So that was the fabled Pavagadh. The historical factual Pavagadh is no less fascinating.

A geographic succession of plateaus from top to bottom [named Kalika Mata, Mauliya, Bhadrakali, Machi, and Atak] separated by steep cliffs made for a perfect strategic stronghold. The Solanki kings of Gujarat [10th – 12th Century] were quick to see this and built a fort on it. In 1300 AD they were succeeded by the Kichchi Chauhan Rajputs who ruled for 184 years and further improved the citadel. The result was three lines of impregnable stone and brick fortification walls on Pavagadh which were used to ward off the repeated attacks by three generations of the Gujarat Sultanate determined to gain control of the hillock.

The walls were innovative to say the least, with bastions and architectural contraptions for canons, catapults, and other military equipment. It took a 20-month siege by Sultan Mahmud Begada to conquer the last ruler Jai Singh, popularly known as Patai Rawal, in 1484. Rawal and his Ministers fought till the bitter end even whilst the women and children inside the fort burnt themselves alive in a Jauhar, a ritual mass suicide to avoid capture, enslavement, and rape by invaders when faced with inevitable defeat in a war.

What NOT to miss in Pavagadh:
Hindu and Jain Temples from the 10th to 14th Centuries

The Kalika Mata Temple on the peak, at the end of 2,000 steps is the obvious piece-de-résistance. But don’t fret. There is a cable car which goes up from Machi, and all that is left to stride up are 250 steps. The exact date of the temple is unknown—it is often called the oldest temple in Gujarat. What we know for sure though, is that it has been around for at least 700 hundred years; Kalika was the Kichchi Chauhan Rajputs’ family deity.

Interesting factoid: All shakti peethas are iconographically represented alike, with a pair of eyes and a yantra, a diagram associated with tantric worship.

A small dargah devoted to Sadan Shah Pir stands next to the temple and receives an equal amount of pilgrims and faith. According to legend it was only Sadan Shah who could pacify Kalika when in a fit of rage she threatened to destroy the world.

Dating back to the 10th Century, Lakulisa Temple is the oldest known temple edifice on the hill. It is also a visual delight. Be prepared to meet beautifully carved figures of Brahma, Vishnu, Indira, and Ambika, amongst others. I also got to learn that Lakulisa, to whom the temple is dedicated and appears on the lintel, was the 2nd Century AD founder of the Pasupata sect of Shaivism [a branch of Hinduism that worships Shiva]. The Pasupata sect is identified by its long-haired, “god-intoxicated,” ash-smeared ascetics.

Lastly, hidden behind the main path is a cluster of the three prettiest 13th – 14th Century Jain shrines on the hill belonging to the Digambar sect. Made in white stone and covered with Jain iconography, they once surrounded a central temple of which only the foundations remain. 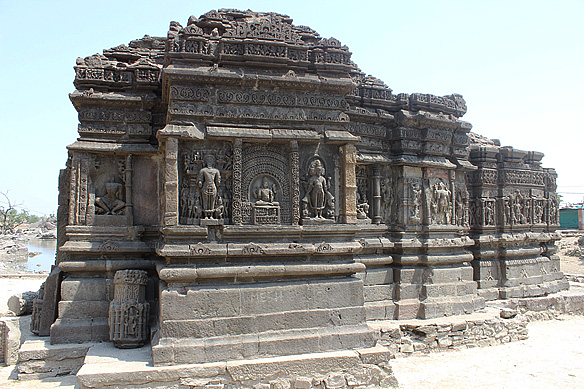 Donkeys going about their daily tasks of taking supplies up the hill. Check out their vermilion tikkas! 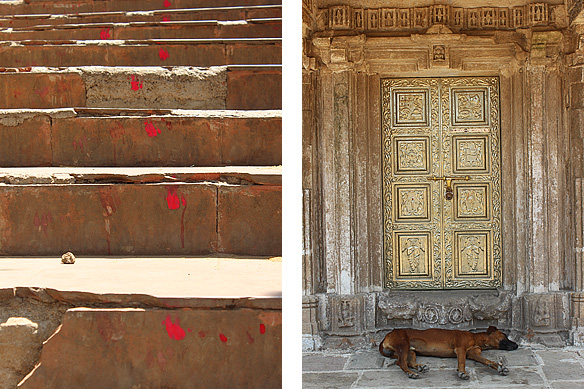 Left: The final 250 steps to the shakti peetha at Pavagadh, one of the 51 sanctified sites across India, Nepal, Bangladesh, Tibet, Sri Lanka, and Pakistan; Right: An ornate 13th Century Jain temple doorway

There are three groups of Jain temples in varying states of ruin. But this does not take away their piousness in the eyes of the visiting Jain pilgrims or the beauty of the elegant compositions and narratives in honour of the Tirthankaras

What NOT to miss in Pavagadh:
Ruins of the 14th – 15th Century Kichchi Chauhan Rajput Fort Complex 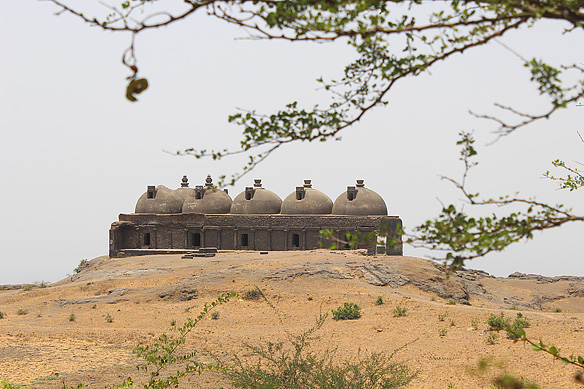 It is easy for the ruins of the extensive fort complex to go unnoticed as they often lie behind heavy foliage or cling to the slopes of the hillside. But once discovered, they take one’s breath away.

Take for instance the Mint or Tankshala. It is an unusual structure with deep pits added to the complex by Mahmud Begada in 1484. Inscribed with the words “Muhammadabad urf Champaner,” the coins minted by Begada and his successors in gold, silver, and copper reflected the city’s prosperity through elaborate designs and rich foliage patterns. Even Humayun, the Mughal Emperor who in turn conquered Champaner in 1535, minted coins at this very mint to celebrate his own victory over the Sultans.

Large water cisterns christened Ganga, Yamuna, and Saraswati sit on the plateaus. Nearby sat manzil, a seven-storeyed watchtower tumbles down a cliff-side. Pioneering military structures dot the fortification walls at regular intervals to catapult, in the literal sense, heavy rock balls to an unsuspecting enemy on the other side.

There is an entire city inside the walls comprising wide avenues, eight majestic gateways, and Patai Rawal’s palace. Historical records claim that after taking over the fort, Begada ordered Rawal to convert to Islam. When Rawal refused he was slain to his death by Begada, and the fort complex changed hands from the Hindu Rajputs to the Muslim Sultans. 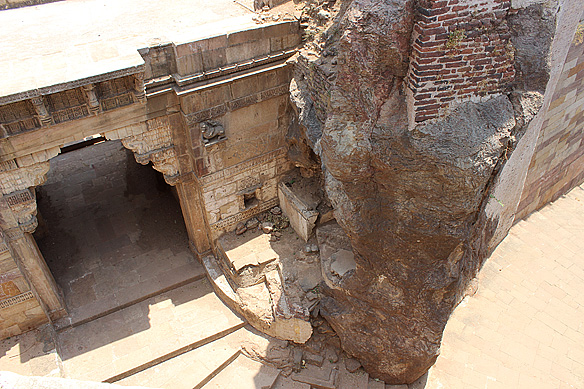 Left: The Mint or Tankshala, built by Mahmud Begada in 1484 was used to mint gold, silver, and copper coins; Right: Look what I found! A piece of sculpture amidst an ongoing excavation’s rubble ❤

Left: Military structures, to hurl large rock balls over the walls onto enemies, line the fortification walls. See the protrusions on both walls? Bamboo shafts were placed on them horizontally and used as catapults; Right: Gate No. 1—Atak Gate

Sat Kaman, the most photographed site in Pavagadh. Originally it was a bastion used by the army to view the entire expanse of the land below; all that remains now are its seven arches shaped like seven bows

You may also like to read Champaner—The Muslim part of the Champaner-Pavagadh UNESCO World Heritage Site.