Nestled deep in the heart of India, on the banks of the seasonal Baghani river in Madhya Pradesh, are a series of nine rock-cut Buddhist temples covered with jewel-like murals. Known as the Bagh Caves, they date back to the 4th to 6th Centuries AD. According to legend they were built by a Buddhist monk called Dataka.

Contemporaries of the better-known Ajanta Caves in Maharashtra, only five survive of its original nine. Very few even know of these five. I for one, did not. Did you?

In Bagh, as in Ajanta, the appendage “cave” is a bit of a misnomer. These temples are not natural caves but rock-cut structures excavated from the perpendicular sandstone faces of the Vindhya mountain range, 150 feet above the river bed. Quadrangular in plan, they are lined with cells surrounding a courtyard and have a stupa-filled chaitya or prayer hall at the back. A colonnaded portico fronts each cave. 1,500 years ago, all nine caves in Bagh were used as viharas or resting places by Buddhist monks.

What makes these caves a masterpiece in India’s ensemble of art and heritage is, however, not their architecture but their tempera murals. Decorated with portraits of bodhisattvas and secular life during the Classical Gupta Period (319 – 605 AD), the powerful line-work bathed with mineral colours are a visual treat, deceptively modern in style and substance.

There are scenes illustrating the lives of the inmates of the monasteries and of the kings and generals who patronized their art. The paintings also had a religious function which explains the air of solemnity and quiet dignity which cloaks them. Fragments of these compositions still exist on the cave walls and ceilings. The most magnificent is in Cave 4, aptly christened Rang Mahal or Palace of Colours.

Time has not been too kind to the Bagh Caves, though. Compounded with the vagaries of weather, the murals, which were once-upon-a-time as exhilarating a sight as those in Ajanta, are dying a slow death. An inspiration to the birth and growth of Modern Indian Art and its masters such as Amrita Sher-Gil and Nandalal Bose, the paintings are now a sorry remnant of their original glory.

But before its downfall could catch up speed, a group of artists and conservationists in the turn of the 20th Century decided to make copies of these artworks for posterity. These watercolour copies are all the more significant because they are painted by 20th Century artists, no different in their love for art from their 5th Century counterparts.

The task of making the copies was initiated in 1920—a task that found completion under the guidance of Captain Gladstone Solomon, principal of Sir JJ School of Art (1918 – 36) in Bombay. Solomon delegated the exercise to two of his students—Bhonsle and Apte—assisted by Bhand, an art student in Gwalior. And hence, three young men were able to give the 1,500-year-old tempera compositions embellishing the Bagh Caves a fresh lease of life, albeit this time in another medium.

These watercolour paintings are today housed in the Bagh Cave Paintings Gallery at the State Museum in Bhopal [also called the State Archaeological Museum]. One hour of revelling in the beauty of these paintings justifies an art-lover’s travels to Bhopal. Mine were. Maybe yours will be too. ❤

Detail, Hallis Lasya [folk dance]: One of the two large-sized reproductions in the gallery, the painting comprises of groups of musicians and dancers, and offers a wonderful glimpse of secular life in 5th Century AD. 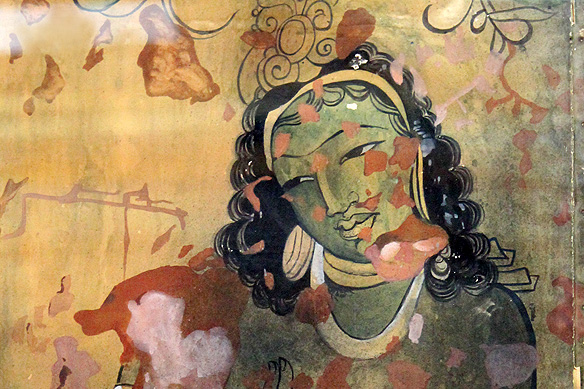 A Bodhisattva. Bodhisattvas are enlightened beings who have put off achieving nirvana in order to help others attain enlightenment.

Preaching Buddha with a monk seated by his feet. 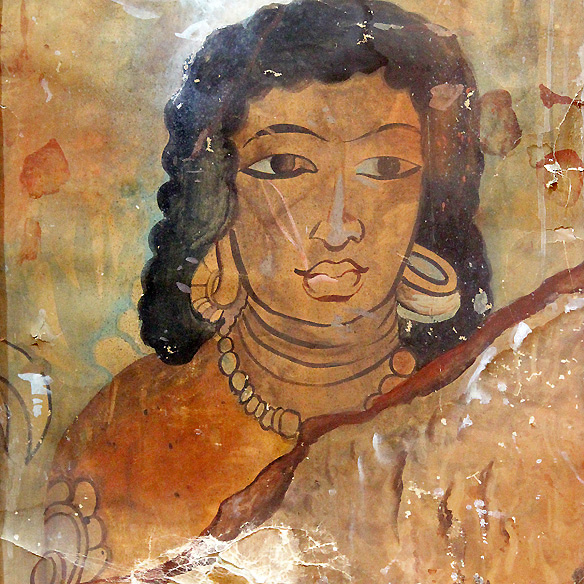 Another Bodhisattva. Bodhisattvas, motivated by great compassion for others, formed an important theme in Buddhist art and literature. 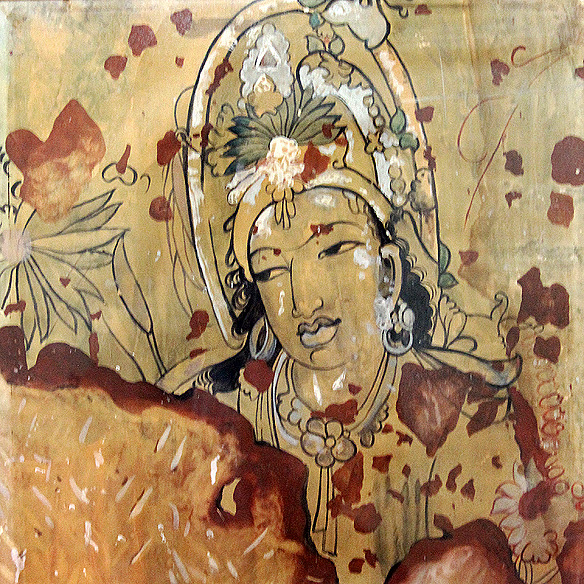 Bodhisattva Padmapani. This painting in the Bagh Caves is considered to be the prototype of the celebrated Padmapani figure at Ajanta. 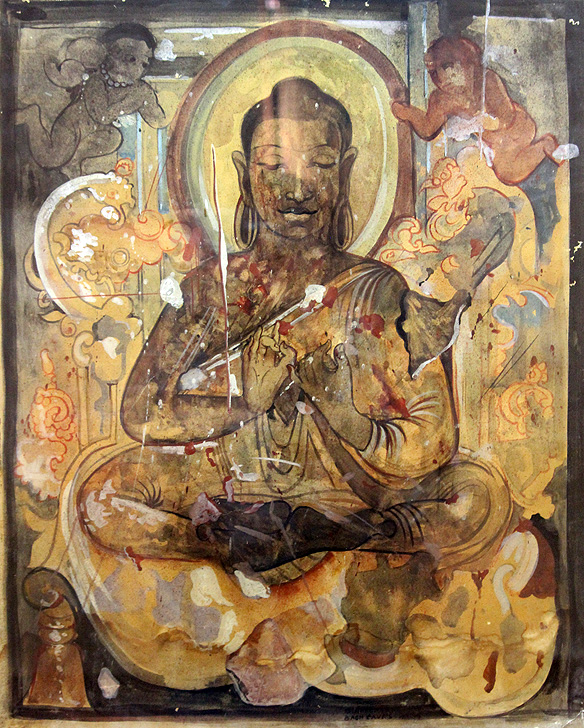 The rock-cut Bagh Cave temples served as monasteries for Buddhist monks who spent the monsoon months in meditation. Whilst the secular paintings depicted the life of their patrons, paintings such as the above portrayed the spiritual side of the monks’ lives. 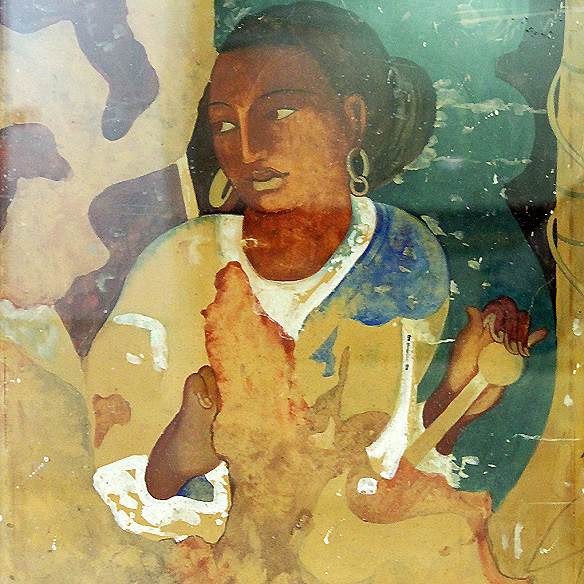 If colour gave life to the Bagh Cave paintings, the fluid vibrant lines gave them vigour. These two key elements of 5th Century Gupta art have been effectively reproduced by Bhonsle, Apte, and Bhand in their 20th Century watercolour copies, ensuring 21st Century audiences also enjoy them. For not all of us can travel to the Bagh Caves and none of us were around in the 1920s. 🙂