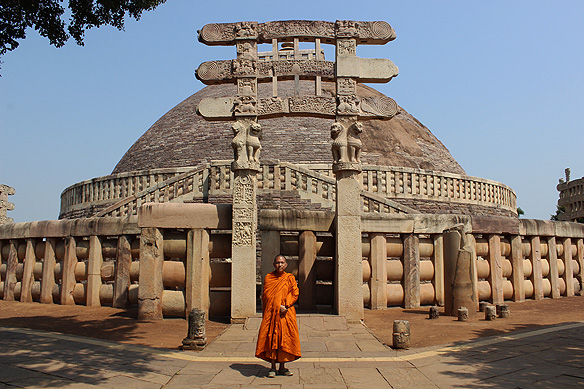 Sanchi. The little town in the heart of Madhya Pradesh had been calling out to me since as far back in time as I could remember. From before I moved back to India. Before I even knew the immensity of its import in the bigger scheme of things.

I would fantasize wandering around the 2,300-year-old Buddhist stupa built by Ashoka the Great, in the company of birdsong and golden rays of sunshine. It epitomized all my soul was constantly hungering for: a space which was closer to nirvana. Don’t get me wrong. I am a hard-core city person. I love the rat race, of ambition and success. But within a mantle of purpose and intention. Of meaning and depth. Sanchi, I believed could help me put the pieces, which I knew as my “life,” into some semblance of balance. For is that not what Gautama Buddha preached about. The Middle Way.

After many a planned trip crumbled to dust as a result of life’s unpredictability, I finally found myself this past month on a rickety bus, driving through ripened wheat fields. I was on my way to ancient Sanchi.

This post is a collection of images [my personal favourites] I took in the span of the two days I spent in one of Buddhism’s most sacred sites. Unconnected to key events in Buddha’s life per se, the Great Stupa housing his relics, is one of Indian heritage’s undisputed gems.

For 1,300 years Sanchi was the centre of Buddhist spirituality. Even the stones seem to be in deep meditation here. Countless faithful have walked and continue to walk the parikrama around its monuments which are much more than brick, mortar, and exquisite carvings. Hundreds of thousands of prayers entrenched in the faith that there is a bigger picture, which we are unaware of, hang in its air, filled with the desire to be in harmony with oneself and the universe. From an art and architecture perspective, the sheer symmetry and finesse of the ensemble is a visual treat in itself.

I hope this post inspires you to make the journey to Sanchi too. We all could do with a few dollops of balance and beauty in our lives, what do you say? 😊 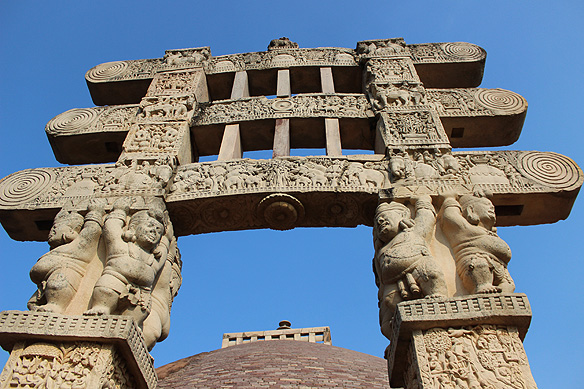 Think Sanchi, and the first sight which comes to mind is its four elaborately carved toranas or gateways flanking the Great Stupa. A key influencer in the listing of Sanchi as a UNESCO World Heritage Site in 1989, the 8.5-metre-high [sans the toppings] gateways date back to the 1st Century BC and were added to the already existing stupa by devout Buddhists during Satavahana rule. 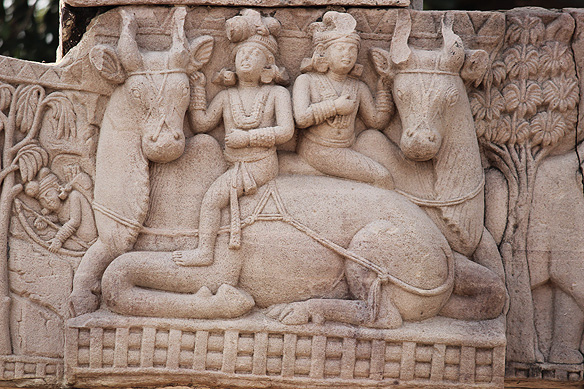 Carved by ivory, wood, and metal craftsmen, the attention to detail in the sandstone toranas shows. The narratives comprise Jataka tales which recount previous births of Gautama Buddha in both human and animal form, scenes from the lives of Gautama Buddha and Manushi Buddhas, and subsequent events in the history of Buddhism. 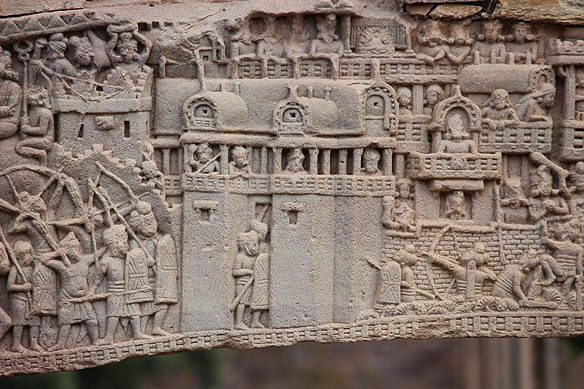 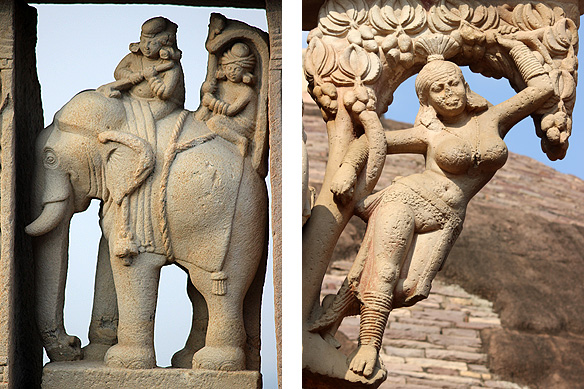 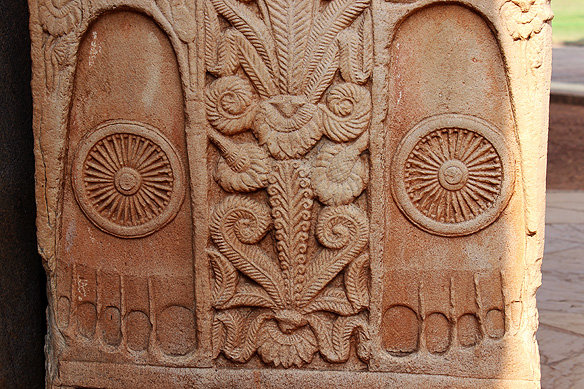 The first torana to be built stands by the Great Stupa’s entrance, next to the Ashoka Pillar, on the southern side. The most exquisite is the northern gate. Do keep an eye out for the carved appendages of secular life, replete with “foreigners” and blatant gender equality two millennia ago, the subtle half-smiles and body language in the story-telling, and the aniconic imagery of Bodhi trees, umbrellas, sets of footprints, wheels, and empty thrones used to depict Gautama Buddha.

Iconic representations of Buddha were introduced much later, in the Gupta Period (240 – 605 AD), of which the serene effigies dotting the site are testimony. 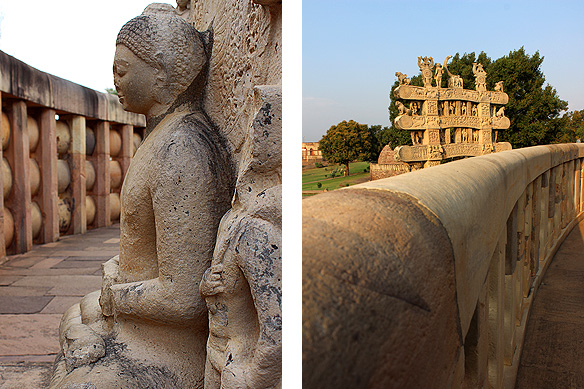 Whilst the architectural and artistic beauty of Sanchi is without a doubt its drawcard, the site has been, and still is, first and foremost a spiritual one.

Built by the legendary Buddhist king Ashoka the Great, on a hilltop in the Raisen District of Madhya Pradesh, Sanchi was a nucleus for Buddhist monastic life for 1,300 years. 900 years on, busloads of Buddhists from Sri Lanka, Thailand and Japan continue to throng its grounds for sermons and group chanting. 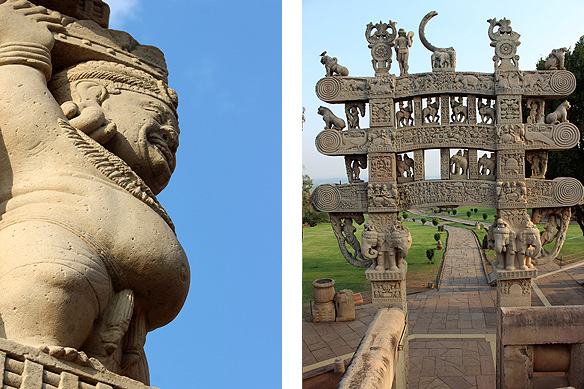 “Amidst the tens of thousands of names of monarchs that crowd the columns of history, their majesties and graciousnesses and serenities and royal highnesses and the like, the name of Ashoka shines, and shines, almost alone, a star.”
~ H.G. Wells, The Outline of History

Ashoka the Great, grandson of the founder of the Mauryan Empire Chandragupta Maurya, ruled almost all of the Indian sub-continent from 268 – 232 BC. Devastated by the death of over 200,000 innocent people in a war he waged against Kalinga [Odisha], and the realization he was the cause of the suffering, led him to convert to Buddhism in 263 BC. A just law-maker, warrior, monk and preacher, tales of his valour and wisdom are recounted to date.

Why, even modern India’s national emblem is an adaptation of Ashoka’s lion capital which topped the pillars inscribed with his edicts that he erected throughout his empire! 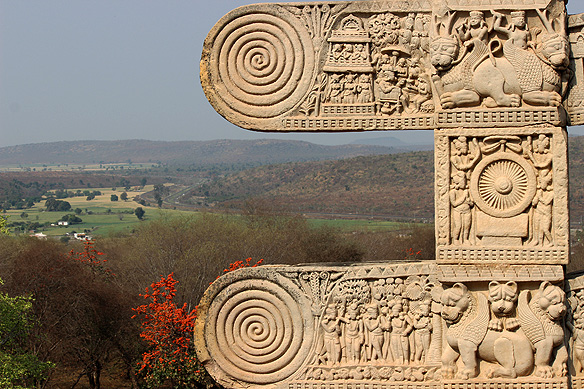 Being a repository of 1,300 years of monastic life and lay faith has turned Sanchi into a unique open-air museum. The site records the birth, zenith, and decline of Buddhist art and architecture from the 3rd Century BC to 12th Century AD, making it unlike any other historical precinct in the world. Within its grounds are some of the finest monuments and temples from the Mauryan period to the Golden Age of India during the Guptas.

Much of Sanchi’s success through the centuries was because of nearby Vidisha, a flourishing city in ancient times. Ashoka’s first wife Devi was from here as well, with whom he set up Sanchi. Numerous inscriptions on the stupas contain the word “daanam” [donation], testifying Vidisha’s rich mercantile community’s role in Sanchi’s construction. 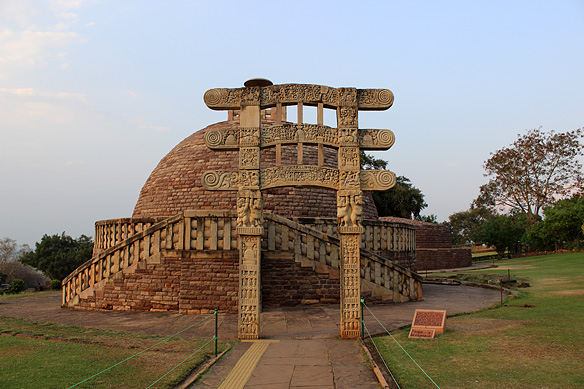 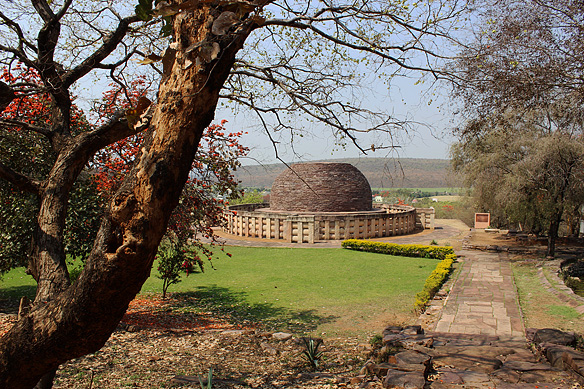 Though the Great Stupa with its ornate toranas is without a doubt Sanchi’s high point, the site comprises of two other equally ethereal, but smaller, stupas. Built by the Sungas in the 2nd Century BC, these contain relics of Buddha’s disciples.

The Sungas were also responsible for enlarging the Great Stupa to its current dimensions [16.5 metres high and 36.5 metres in diameter] and building the stairway and balustrade around it. The original stupa built by Ashoka was half its present size.

Factoid: Did you know three umbrellas topping a stupa signify the relics inside it belong to Gautama Buddha. One umbrella means the stupa contains a disciple’s relics. Well, now you do. 🙂 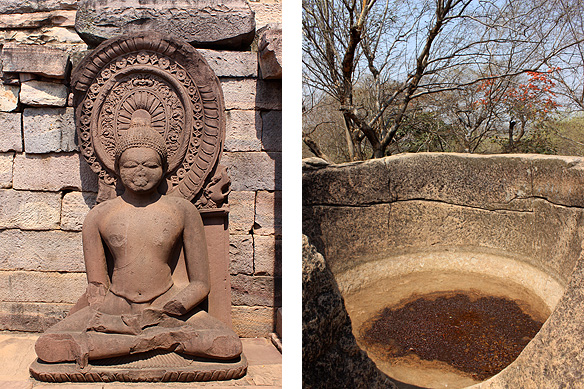 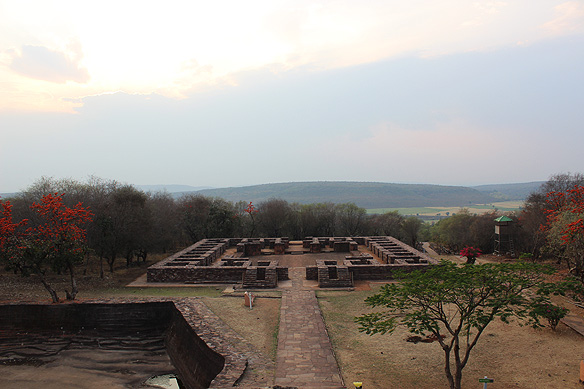 Scattered over the site, there are ruins of temples and monasteries, a shattered, polished chunar sandstone Ashoka Pillar [its lion capital is in the Sanchi Museum], and a gigantic water tank and feeding bowl once used by the monks. 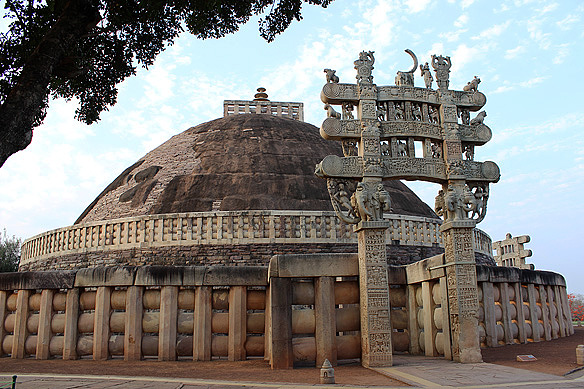 With the revival of Hinduism, followed by the arrival of the Mughals and later the Nawabs of Bhopal, Sanchi’s monuments got lost in the mist of time. Weeds and forest started to grow wild in the grounds; the toranas toppled over.

Added to it, greedy treasure-hunters and amateur archaeologists during British rule cracked open the stupas out of curiosity and a local landowner axed the Ashoka Pillar to use as a sugar-cane press. This all went on largely unhindered till Sir John Marshall, Director General of Archaeological Survey of India restored the monuments to their present condition in 1912 – 1919. Result: People like you and me could make that much fantasized journey to Ashoka the Great’s Sanchi.

PS. You can visit Marshall’s house where he lived and worked from for 7 years. It stands next to the Sanchi Museum.