“Passer-by, I am Cyrus the Great, I have given the Persians an empire and I have ruled over Asia. So do not envy me for this tomb.”
~ Inscription on the tomb of Cyrus the Great, Pasargade, 6th Century BC

I love rambling through archaeological sites, running my fingers over millennia old ruins, walking down worn out paths where before me countless souls had also passed along. Where history was made and destinies defined. Sites like these are humbling, making us realize how small we are in the bigger picture. And yet such sites also fill us with a deep sense of pride in humanity’s political achievements and artistic endeavors which are a legacy belonging to all mankind.

The magnificent city of Persepolis, looming high over the plain on a series of terraces, embodies the greatest triumphs of the ancient Achaemenid empire. The monumental staircases, exquisite reliefs, gigantic columns, and impressive gateways are a reflection of the vast body of knowledge and skill collected from the various nations the empire ruled. The city is Persian in design and ideology but literally global in its architecture and artistic execution. The original name of the city was Parsa. The Greeks named it Persepolis.

In 550 BC, 29-year-old Cyrus the Great defeated the Medians and within a century he and his successors, Darius I and Xerxes I, had made the Achaemenid empire, the first of the Persian empires, into the greatest the world had seen stretching from India in the east to the Danube in Europe. The Achaemenid empire united people and kingdoms from every major civilization in south-west Asia and north-east Africa. For the first time in history, people from very different cultures were in contact with one another under one ruler.

Paved roads stretched from one end of the empire to the other with caravanserai at regular intervals to provide food and shelter to travelers. The first ever postal service was introduced by the Achaemenids.

The core troops of the Achaemenid empire were known as the Ten Thousand Immortals because their number of ten thousand was immediately reestablished after every loss. They wore elaborate robes and much gold jewelry. They apparently had special privileges as well—they were allowed to take concubines and servants along with them on the march.

The complex at Persepolis was started by Darius I in 518 BC and was added to by a host of subsequent kings over a period of 150 years. The city served as the religious center of an empire whose primary faith was Zoroastrianism and was the official venue for the annual No Ruz (New Year) festival. The site’s main architectural jewels are the Grand Stairway, Xerxes’ Gateway, Apadana Palace and Apadana Stairway. The Apadana Palace was where the king received visitors. Its roof was supported by 36 towering stone columns, each 20 meters high and topped with fantastic animal shaped capitals. The Apadana Stairway, depicting the empire’s 23 subject nationalities bringing tribute to the Persian kings, is universally considered to be a world masterpiece.

The Achaemenid kings are buried at Persepolis, Naqsh-e Rostam and Pasargade. Carved out of a cliff, the four tombs at Naqsh-e Rostam are thought to belong to Darius II, Artaxerxes I, Darius I, and Xerxes I. Facing the cliff is the Kaba Zartosht, an Achaemenid fire temple. Cyrus the Great is buried at Pasargade, Persia’s first city, in a six-tiered tomb.

It was beautiful, spending the whole day in the shadow of the Achaemenids. Marveling at the immensity of scale and time, clambering through worn out rock-hewn steps, discovering stunning reliefs in forgotten palaces, and being humbled by great kings and their astounding feats.

As I gave the city of Persepolis one last glance before walking out of the gates, I sincerely hoped that Persepolis would never be burnt down a second time and that centuries from today people would be able to feel the same wonder I felt now. To be able to enjoy the same delight in having great civilizations as part of our world history and be inspired by all that was wonderful and glorious in being extraordinarily human. 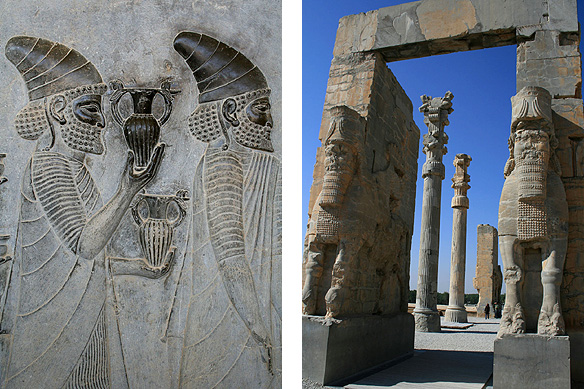 The ancient city of Persepolis: Persian in spirit and global in its execution.

Naqsh-e Rostam, the 2,500-year-old rock-cut tombs of the Achaemenid kings.

Note: I travelled to Iran in October 2007 for two weeks. Iran has been one of my most memorable travels to date. I am republishing the series comprising 10 posts till this mid-June. Refreshing my personal memories. This is the fourth post in the series—on Persepolis, one of the most magnificent highlights of the country, and our world. Hope you enjoy the read. 🙂

18 thoughts on “iran 4: the story of persepolis”