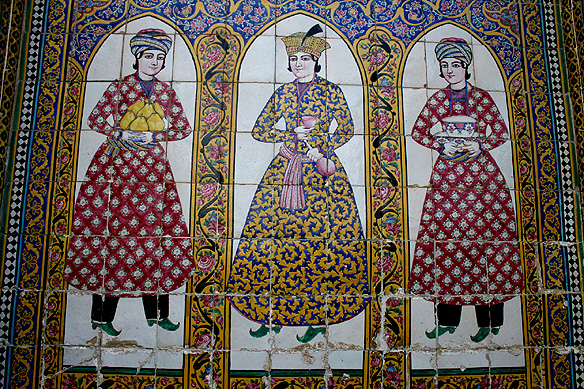 I’m in Shiraz, the heartland of Persian culture. Shiraz was one of the most important cities in the medieval Islamic world and the capital of the Zand Dynasty from 1747 to 1779. Through its many artists and scholars the city earned a reputation for being the “House of Learning” and was synonymous with education, nightingales, poetry, roses. and at one time, red wine. It is home to one of the oldest universities dating to the 7th Century AD. Two of the world’s greatest poets, Hafez and Saadi are buried here.

Shiraz, today, still has many charms to its credit. Beautiful pink painted tile-work, Hafez’s soulful poetry, a quiet understated sense of elegance, and a sweet fruity non-alcoholic beer which is as close as you’ll get to Hafez’s coveted glass of intoxication. But then of course one could dig deeper into the Sufi nuances and realize that Hafez is not talking about wine at all, but being drunk on our love for our Creator, and being one with Him. And twirling round and round in that love just like the world turns around. Did I get it right, Hafez?

There is much to explore in Shiraz. The Citadel from where Karim Khan e Zand ruled during the Zand period has, as its main claim to fame, impressive stucco-work and a tilted tower which competes with the Leaning Tower of Pisa in beating the principles of gravity. The 19th Century Nasir-ul-Mulk Mosque is exquisite with its pink floral tile-work and calm pools. The Qajar period Naranjestan Gardens has the most amazing ceramic painted tiles depicting royal princes and hunting scenes, and mirror-work where one can indulge in self-portraits to one’s heart’s content. There are Shiite shrines covered in intricate mirror mosaics heady in their ethereal beauty. And there is Hafez’s tomb itself, where scholars meditate on the mysteries of Sufism with tears in their eyes and wonder in their hearts.

Occasionally, I would come across a young man or woman with a plaster on their nose. No, they had not got themselves into a fight. It is the proverbial nose job. Everyone in Iran who can afford it gets their noses fixed. And at times their lips, eyebrows, cheek bones, and chins. It is a quest to perfect their own beauty.

The Bazaar-e Vakil constructed by Karim Khan, as part of a plan to make Shiraz into a great trading center, is the most architecturally impressive in the country. Within the vaulted brick labyrinthine lanes are an eclectic mix of Afghanis, Pakistanis, Persians, Azerbaijanis, Turks and Arabs selling Shiite memorabilia, handicrafts and jeweled trinkets. I bought a handmade ring for a dollar and a half from an Afghani who had lived in Pakistan, was a big fan of Shah Rukh Khan and spoke flawless Hindi.

The highlight of my time in Shiraz was, however, the taxi ride back from Yord, a nomadic restaurant I went to for the staple chicken kebabs and chai. I took a cab from a company run by a woman who only hired women drivers. And boy, were they a fearless, speed-breaking, swashbuckling lot! My cab raced through town, jumped lights, drove against traffic on one-way streets, took forbidden U-turns, and overtook cops with blatant joy. And at the helm of this epic drive was a demure hejab-clad bespectacled smiling 21-year-old, bobbing her head to Iranian rap that blasted full volume from her car stereo, driving with one hand on the steering wheel and the other glued to her mobile with which she arranged maneuvers with her colleagues in the other cabs. Zoom. Zoom. Watch your heads. And watch your hearts. And in a flash I was back at the hotel. Phew. That’s woman power in the streets of Shiraz. I wonder how Hafez would have interpreted it all. 🙂

The Citadel from where Karim Khan e Zand ruled during the Zand period. 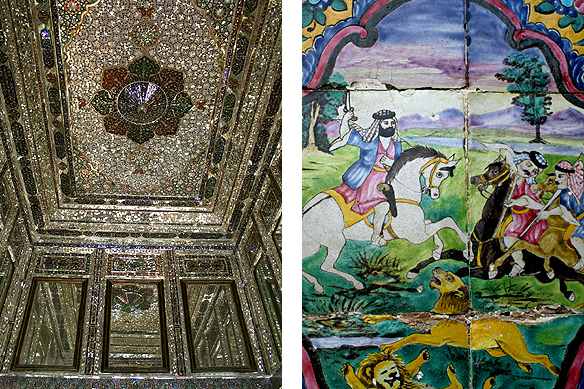 Painted tiles and dazzling glass-work create a heady mix of sumptuousness in the Qajar-era Naranjestan Gardens. 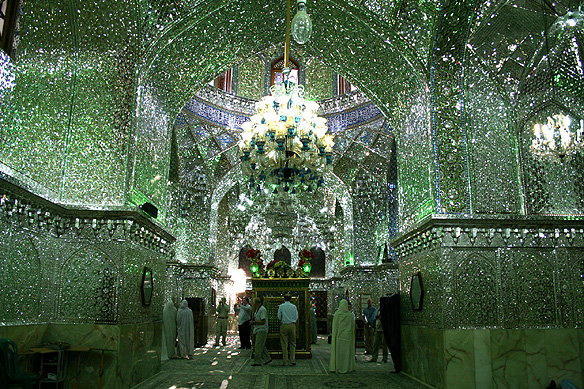 Shiite shrine in Shiraz—Glitterati of a different kind. That’s a group of Western tourists around the tomb.

The tomb of Hafez, the famed poet, with a fortune-teller at its gate—A little birdie told me what my tomorrows will be like. However, it is in Farsi and I’m happy to live in ignorant bliss!

Local Iranians having dinner and a smoke at Yord, a nomadic restaurant set up in tents.

Note: I travelled to Iran in October 2007 for two weeks. Iran has been one of my most memorable travels to date. I am republishing the series comprising 10 posts till this mid-June. Refreshing my personal memories. This is the sixth post in the series—on Shiraz, the heartland of Persian culture. Hope you enjoy the read. 🙂