The year is 1765. The place: A windy bay in Western Morocco. Sidi Mohamed Ben Abdallah, Morocco’s Sultan, has come up with the idea of building a fortified port-city by the sea to strengthen trade ties with Europe and the New World.

But with a difference. He decides to commission a Frenchman, Theodore Cornut to build it, using French military architectural elements. The city is populated with Africans, Amazighs, Arabs, and Europeans. A colony of Moroccan Jews are especially brought in to carry out the trade. And, thus, Essaouira meaning “the beautifully designed” is born.

Essaouira was no stranger to human habitation. Its merits as a port were also recognized by the sea-faring Phoenicians and Carthaginians way back in the 5th Century BC. But its 18th Century amalgamation of European military architecture in a North African non-colonized context, multi-cultural secular coexistence, and as a gateway to gold-producing Timbuktu, catapulted the town to great riches and fortunes. In 2001, these very qualities qualified it for a listing as a UNESCO World Heritage Site.

Throw in a broad 5-kilometre long beach with endless golden sands and its role as a modern mecca for the arts and music—Essaouira plays host to the Gnaoua World Music Festival every June. The culminated result is a city unlike any other.

These are my 36 hours in the windy city of Essaouira [pronounced es-sweera], an eclectic mix of sun, sand, and sea, and where Africa and Europe meet. Have you been to Essaouira? What were your highlights? Do share in the comments section. I would love to read them.

Day 1: Morning: Get a map and discover Essaouira’s UNESCO-listed heritage

Bronze canons lining the Kasbah Skala; these were placed by the Sultan Sidi Mohamed Ben Abdallah for military protection.

What better way could there be to be introduced to the charms of Essaouira than through a ramble around its old Medina, a UNESCO-listed World Heritage Site. Armed with a map which I picked up from a bookstore, a self-guided walk it was for me. May I suggest you do the same.

To the extreme north is the Kasbah Skala with its row of bronze European canons staring out stern-faced at the crashing waves of the Atlantic Ocean, ready for military attack in the past. To the south is the castle-styled Port with its squealing seagulls and writhing fish laid out for sale. Dubbed the “port of Timbuktu,” it was Europe and the New World’s gateway to Timbuktu, Africa’s legendary kingdom, throughout the 18th and 19th Centuries.

To the north and east is the Kasbah itself, Essaouira’s oldest section. Together with the Sultan’s mint, it housed the residential quarters of city officials and consuls from Denmark, Germany, Holland, Portugal, and Spain whom he hosted. Just outside the city walls is the Orson Wells Square named after Orson Wells, director of the epic movie Othello. The classic 1951 film was shot at the Kasbah Skala, rocketing the little town to modern global fame.

I let my rambles lead me into untouristy Mellah or the Jewish Quarter with its deserted synagogues and where a sizable Jewish population once lived under the protection of the Sultan till the 1940s. From there I found my way back to the main square pegged by the towering Mosquee de la Kasbah. No surprises, I am fully charmed by now with the mix of east and west which Essaouira lives out flawlessly. 🙂

Travel tips: 1) City maps are available for 20 dirhams each at the bookstores. The maps are also available for free [one per person] at the tourist office near Bab Sbaa. 2) The Kasbah Skala is open from sunrise to sunset only.

Day 1: Afternoon: Wander through the medieval bazaars and by-lanes 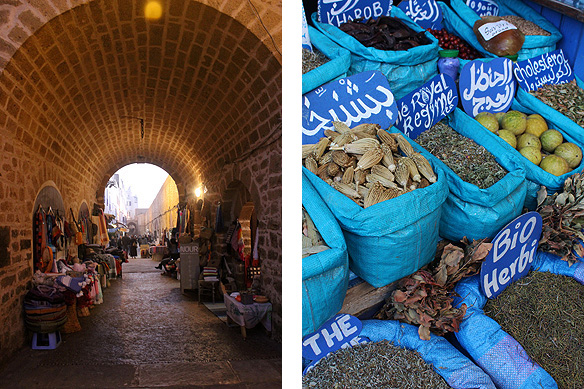 If one dimension of Essaouira is its UNESCO-listed heritage, the other is its medieval lanes brimming with Moroccan handicrafts and art. Tiny cafes line narrow alleys. Vegan restaurants fill delightful squares. Souks for jewellery, fresh meat, fish, spices, fruits, dry fruits, vegetables, grains, natural pigments, clothes, and fabric gather around the intersection of the two main streets at Souk Jedid.

The old Medina is a shopper’s paradise. And even if you are not a shopper, like me, it is a sensory treat with all its colours, smells, and sounds!

Day 1: Evening: Have a tagine and a cafe nous nous in Place Moulay El Hassan

For the perfect wrap to a day of exploration and heritage, nothing can beat the taste and ambience of a Moroccan dinner in Essaouira’s main square. Place Moulay El Hassan comes alive at night, for both the locals and visitors alike. Live music performances, the call of the muezzin, and circling seagulls all compete to be heard. The cafes are lit up, a laid-back air prevails. You can smell the sea a stone’s throw away, reminding you travel is about the big moments and the little ones too.

Travel tip: For an up-market experience try Taros. It has a live band and great sunset views of the harbour.

Essaouira’s beaches are a world apart from other beaches. Let me explain. On second thoughts, I will let my pictures do the talking here. 😀 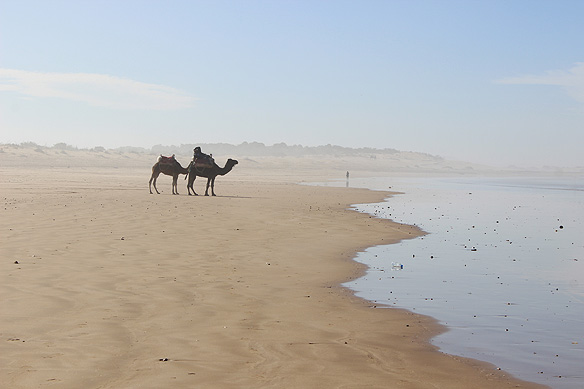 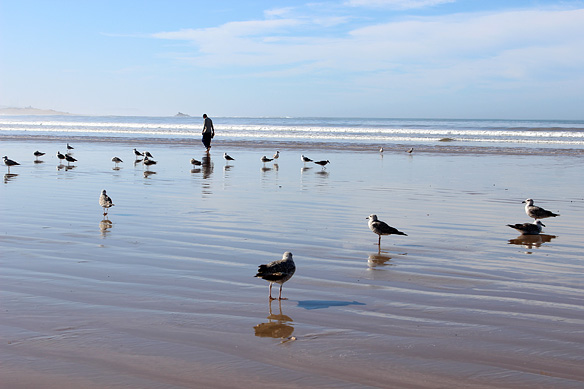 Miles and miles of buttery sands with seagulls for company.

Just off the coast, to the west, is the Ile de Mogador also known as the Purple Isles. Back in antiquity, a pigment from its inter-tidal rocks was used to dye the purple stripes on Roman senators’ togas. 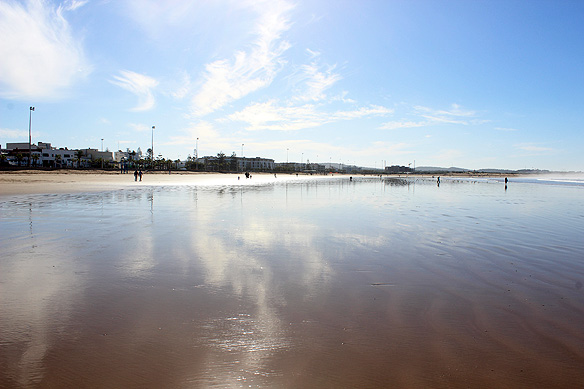 The surreal reflection above is nope, not on the ocean, but on the colossal expanse of wet golden sands lining Essaouira’s coastline.

Borj El Baroud: The remnants of a medieval watchtower past the Ksab River. One can waddle across the ocean right up to the ruins. 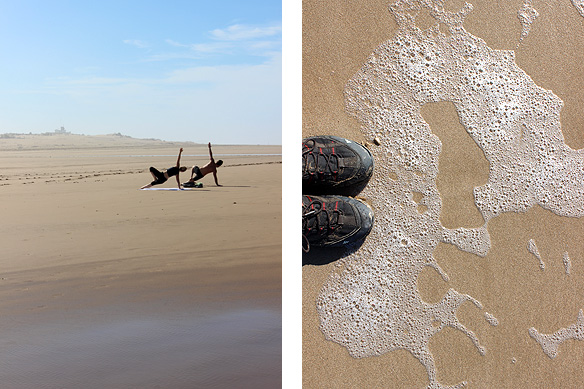 Left: Just another day of yoga by the sea; Right: Self-portrait, I am in Essaouira.

Day 2: Afternoon: Walk over the sand dunes for lunch at Jimi Hendrix Cafe 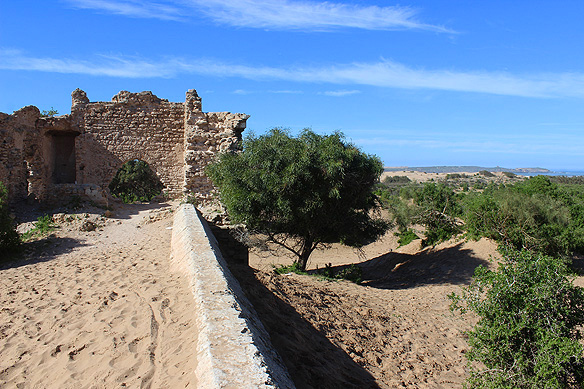 After done wandering through the heady mix of sun, sand and sea, a la Moroccan style, do hike across the dunes to the other side. The non-existent path takes one past creamy mounds and gorgeous views, stopping en-route at the ruins of the White House or Dar Es-Sultan in Diabat village. The residence of Sultan Sidi Mohammed Ben Abdallah and, later, King of Mogador, it used to be once-upon-a-time furnished with the finest European mirrors and silks, and played host to the rich and powerful.

At the end of the dunes lies Essaouira’s claim to rock music fame.

In the summer of 1969, Jimi Hendrix spent many a day basking in Essaouira’s year-round sunshine. This momentous event is celebrated with a Jimi Hendrix Cafe in his honour replete with his music playing, pictures of him in his youth displayed, and bright colourful portraits of him painted on the walls.

You don’t necessarily have to be a Hendrix fan to warrant a visit to the cafe. The food is just as scrumptious. The atmosphere, a step back in time into the 1960s. For the uninitiated, Jimi Hendrix (1942 – 1970) was an American rock guitarist, singer, and songwriter. He is regarded as one of the greatest musicians in rock music history. 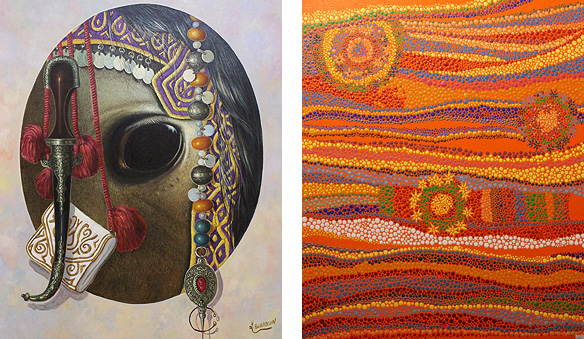 Morocco’s contemporary art scene unfolds in full exuberance in the windy city by the sea. There are galleries lining every lane and by-lane, filled to the seams with Moroccan artists breaking away from traditional art and its norms to discover and express their interpretation of themselves, life, and the world in a highly personal visual language.

It, thus, stands to reason that no trip to Essaouira is complete without a browse through its galleries, whether they are indoors or out in the open-air. But if time or inclination is short, then it is one particular gallery—the Galerie la Kasbah. Want further proof? Check out its reviews on TripAdvisor. Part gallery, part museum, the Galerie la Kasbah occupies three floors of the proprietors’ ancestral 18th Century Riad with no pressure to buy. The very best of contemporary Moroccan art drapes the walls inside, interspersed with indigenous objets d’art.

The above three paintings were my favourites. Boussaboune’s synthesis of Amazigh idioms, Tilly’s impressionist “points,” and Rhommani’s Moroccan street scene in ultramarine blues. I loved them to bits and would happily have had them packed and shipped to my home in Mumbai. Except that I am a minimalist. So, hanging them up on my post will instead have to suffice: A happy reminder of happy days. ❤

Aren’t these pretty? So simple, yet so powerful. The above paintings were on display at the Kasbah Scala ramparts.

[Note: This blog post is part of a series from my travels to Morocco for 3 weeks in November-December, 2018. To read more posts in my Morocco series, click here.]

13 thoughts on “36 hours in essaouira, where europe meets africa”