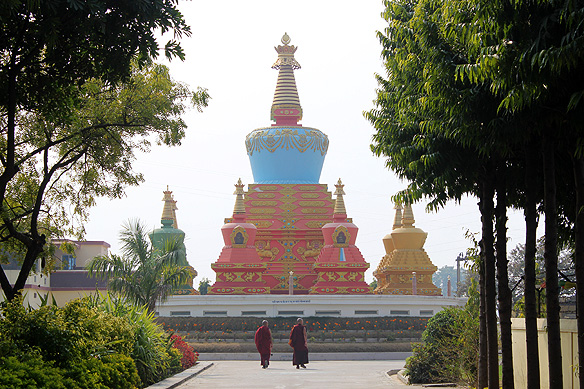 Auto-rickshaw driver: Which temple would you like to see? Tibet or Japan? Or Thai? [All the rickshaw drivers in Bodh Gaya, I realise by now, speak impeccable English.]

I see his eyes light up. I can almost read his mind: This woman will pay me well. She is the wandering types.

I bargain my way down to Rs. 500 plus a hundred-rupee tip. We shake hands and embark on a six-hour camaraderie which survives through the rattling by-lanes to Bodh Gaya’s far corners, in search of Buddhist temples and monasteries from Tibet to Japan. I say “search” because some of our stops I had merely wisps of information of, and he was completely clueless about.

Though Buddhism as a religion took birth and flowered in India, only 0.7 percent of modern India’s population is Buddhist. The rise of Brahminism from the 5th Century AD onward and the Muslim conquest of the Indian subcontinent in 1204 AD resulted in Buddhism losing its hold on the people of Hindustan by the end of the 12th Century.

But not before it had spread to the south into Sri Lanka and to the east, over South-East Asia and on to the Far East, where it continued to thrive over the ages, creating 520 million followers or 7 percent of the global population. Whilst the essence of Buddhism remained intact through all this, it morphed culturally in these various lands.

Result: Bodh Gaya, the centre of the Buddhist world where Buddha received his enlightenment way back in the 6th Century BC is also a microcosm of the Buddhist world. Different countries have built scores of Buddhist temples and monasteries in their inimitable architectural and spiritual styles on this hallowed ground.

From Tibet’s colourful, mystical Mahayana Buddhist monasteries to the simplicity and clean lines of Japan’s Nichiren Buddhism to the sweeping graceful lines of Thailand’s Theravada Buddhism which traces its way back to Emperor Ashoka. They are all here, some better than the rest. PS. The better ones are in this post.

This dear reader, in conclusion, is what the Buddhist world on our beloved earth looks like on a winter afternoon of temple-hopping in Bodh Gaya. Happy photo viewing. ❤ 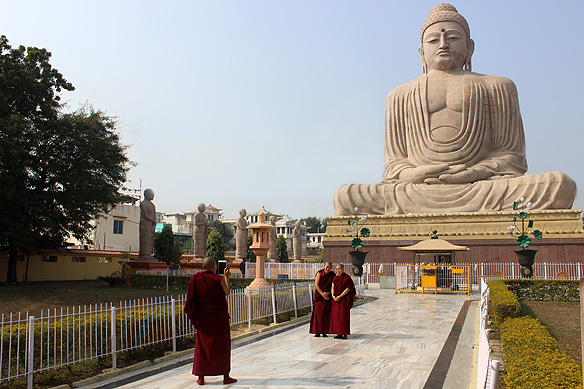 The perfect place to start: Daibutsu or the Great Buddha Statue built by the Daijokyo sect of Nagoya, Japan in 1989 as a mark of peace and happiness. In Bodh Gaya, the monks are the tourists.

A stone’s throw away from the Great Buddha Statue is the Tibetan Palyul Namdroling Temple which I stumbled upon by chance. Relatively new, it was built in 2016. You will recognize it with its candy-coloured stupas in the grounds [see blog post title image].

Further afield, across the Phalgu river, are two historical places associated with Sujata, the cow-herder who offered Buddha a bowl of rice pudding, mistaking him for a tree deity. Weakened by six years of penance and fasting, and not getting anywhere, the meal set him on the path of the Middle Way.

Above: A stupa [8th – 9th Century AD] marks Sujata’s home. Below: The banyan tree under which Sujata offered the rice pudding to the emaciated Buddha. 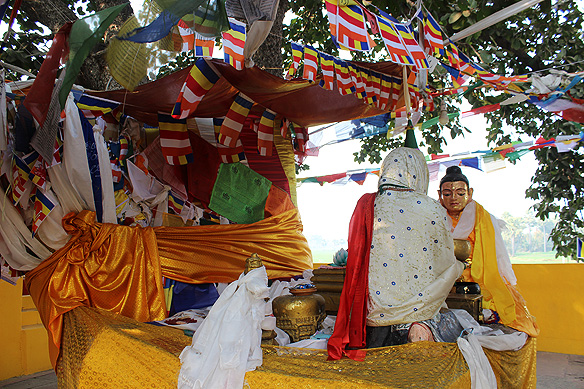 Aah, time for a break, and where else but at a “happy place” aka the Be Happy Cafe, a vegetarian pizzeria, coffee house, and bakery.

Bursting at the seams with Tibetan atmosphere is the Tergar Monastery (2006) of the Karmapa School of Tibetan Buddhism. If you ever wanted to visit Tibet in all its colourful, mystical glory, this is the closest you’ll find in Bodh Gaya.

Prayer beads in wood, glass, and rudraksha, in browns, yellows, and reds.

Guardian deities at the Thai Temple. Both the ferocious and kind types. The only one of its kind in India, the temple was built in 1956.

Talk about being enterprising! The Thai Temple has donation boxes for each day of the week with pretty creative rationales for donating. My visit was on a Saturday, so this was what was prescribed. For Friday, it read: “Donate for electric payment and water supply. The result: Removing grief and sadness bringing the bright, smooth and abundance.” 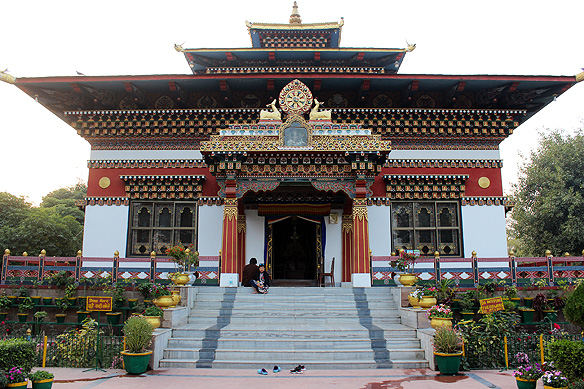 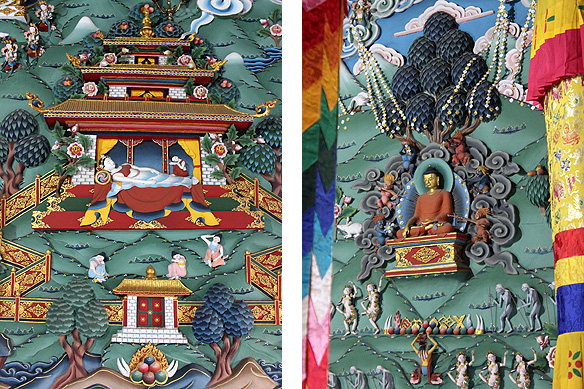 Decorated from top to bottom with 3D frescoes of scenes from Buddha’s life, the kings of Bhutan, and the kingdom’s religious leader is the fantastical Royal Bhutan Monastery. Compact and filled with delightful details, I think I spent more time gasping in child-like wonder here than bowing with reverence. 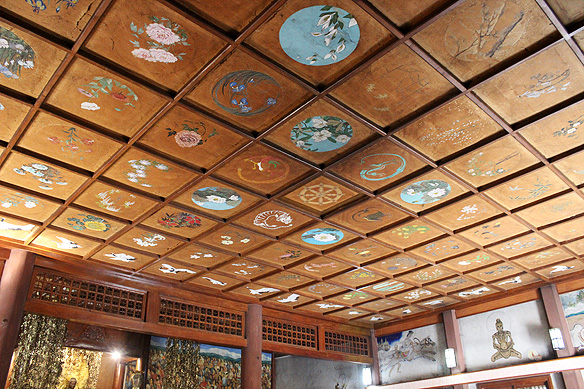 My last and final stop, the wooden Indosan Nipponji Temple (1972), an epitome of Japanese subtlety. Above: Its hand-painted ceiling of swans and roses. Below: The tiny shrines next to the enormous bell which booms out at fixed times.

A row of khatas tied on a balustrade. The traditional, ceremonial Tibetan scarf, its white colour is symbolic of the purity of the giver’s heart. What a perfect sight to end my day’s wanderings from Tibet to Japan in Bodh Gaya. Wouldn’t you agree?

12 thoughts on “temple-hopping in bodh gaya: from tibet to japan”