We travel not for trafficking alone;
By hotter winds our fiery hearts are fanned:
For lust of knowing what should not be known,
We take the Golden Road to Samarkand.

One cannot claim to be a traveller, and not have made the journey to Samarkand. Or at least have thought of it, fantasised about it. It would be blasphemy.

Samarkand is everything the traveller searches for, within and outside of oneself. It reveals secrets about life held gently amidst its spectacular edifices in blue and gold. The romantic exotic tile-clad mosques, madrasahs, tombs, bazaars and squares transpose one back 500 years in time to a grand fairy-tale city, deep in arid windswept Central Asia. On a philosophical note, Samarkand is the semi-mythological place of “justice, fairness, and righteousness” in Islamic Classical literature.

Much like Flecker’s reference to it, a lust for knowing more about ourselves and these ideals, makes the passage to Samarkand one of those non-negotiable, mandatory journeys one just has to take. 🙂

But peel the layers away and the World Heritage Site reveals even more. 2,759 years old, traces of wall murals bring to light its role as the capital of Sogdia (6th Century BC to 13th Century) when it was known as Afrasiab and trade with the Far East was rife. Colourful wall paintings decorating a large urban settlement set the city apart. These wall paintings (7th-8th Century) are now on display at the Afrasiab Museum.

A major trading post during the Great Silk Road, Samarkand was a melting pot of cultures and knowledge between China, India, and the West. But all this was plundered, and destroyed by the Mongols in 1220, and like the oft quoted Phoenix, it rose from its ashes under the Timurids, even grander, and more beautiful.

Capital of the Timurid dynasty (1370-1507), Temur and his grandson Ulugh Beg turned the city into the largest cultural, scientific, and trading centre in medieval times. Carefully conserved by UNESCO, Samarkand lives on in the 21st Century, intact.

So where does one start in Samarkand. At the Registan. That’s what I did. And do go back to it a second and third time to breathe it in once more, and be humbled and inspired by its grandeur—once during the day, and at least once more in the evening. Come dusk, the mosques and madrasahs get bathed in golden light, whilst a lone moon stares down at it in equal awe. It is beautiful and does full justice to all you may have heard of it. 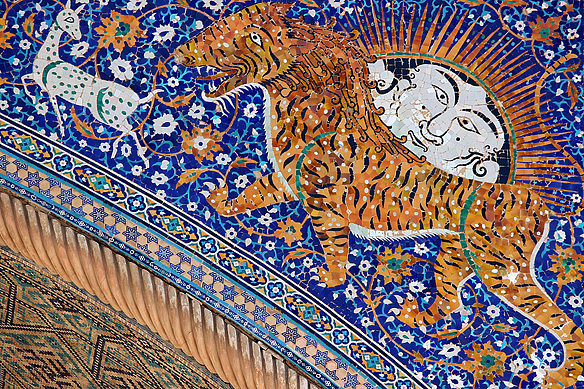 Striped tigers with human-faced suns rising over their backs chase baby deer above the portal arch of Sher Dor Madrasah.

The Registan, translated the “Sandy Place” is and was the heart of Samarkand from way before the Mongol invasion. Ulugh Beg transformed the square from an open bazaar into the city’s main economic, cultural and political centre with three structures along its edges: a madrasah [Islamic School], caravan-sarai [caravan shelter] and sufi khanaka [monastery for dervishes]. 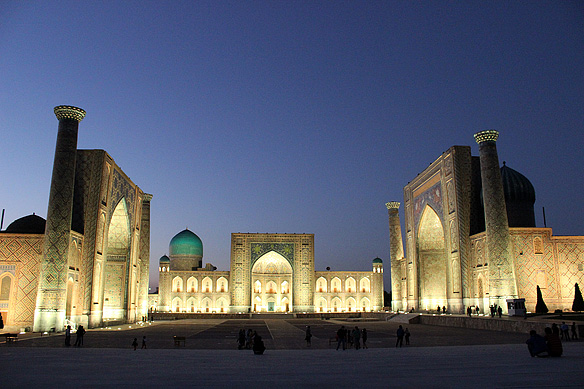 Top left: Koran stand at Bibi-Khanym Mosque where everything is oversized. 🙂

A short stroll away is the enormous Bibi-Khanym Mosque, the largest mosque in Central Asia, and one of the largest in the Islamic world at 100 by 140 metres and a 41 metre high cupola. Slowly crumbling over the years and now in ruins, its grandeur still impresses.

There’s a tongue-in-cheek myth associated with it which made me chuckle, as well as nod in surprised agreement. Built by Bibi-Khanym, a Chinese and the oldest wife of Temur, as a surprise gift for him whilst he was away at war, she was forced to kiss her architect in return for its completion in time. Their conversation went something like this:

Her: “I will give you any of my handmaidens you wish. Why do you look at me only? Look at these painted eggs. They are of different colours and there is nothing similar between them. But when you break them, will they differ from each other? So are we, women.”

Him: “Here are two identical glasses, I will fill one of them with pure water and the other with white wine. And now they look alike, but if I touch them with my lips, one of them will burn me with fused fire while the second one will be tasteless to me. Such is love.”

Temur found out about the kiss and since then women have been made to wear a veil.

Let me digress a bit here, from the grand to the mundane—a distinguishing feature of eastern cities is usually their bustling markets. Samarkand’s lies in the Old Town next to the Bibi-Khanym Mosque. There’s everything here, but for something indeed indigenous try the Samarkand lepeshkas [bread] which remain edible for up to three years. 😀

The azure dome of Gur-Emir.

Coming back to the spectacular: If the Bibi-Khanym Mosque is about love and god, the majestic Gur-Emir Mausoleum is about death and god—it is the grave of the ruler. Within the mausoleum’s perfect symmetry and restored main chamber, in an underground crypt lie Temur, his sons Shahrukh Mirza and Miranshah, grandsons Mohammed Sultan and Ulugh Beg, and great grandsons. The largest gravestone belongs to Mir Said Baraka, Temur’s spiritual teacher, and at whose feet Temur lies buried.

High relief delicate papier mache decorations, silver encrusted gilded inscriptions and floral ornamentation cover every inch of the walls and ceiling. It is poetic; the soft light filtering in through the stone latticed windows. Every now and then an Uzbek kneels down to pray to Baraka and imbues the room with a sacred air.

Gur-Emir Mausoleum—the grave of the ruler. 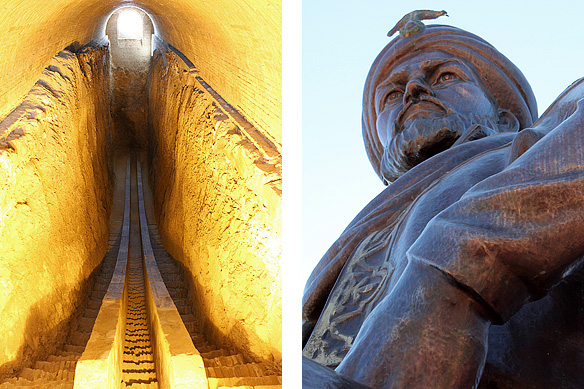 The scientific credentials of Samarkand go to Ulugh Beg and his work as an astronomer. One has to visit his observatory to understand the magnitude of his work. Built in 1429, the observatory was in the form of a three-storeyed cylinder 30.4 metres high, with a gigantic marble sextant 40.4 metres in radius. Together, they were used to measure the coordinates of the sun, moon, and other planets. The observatory is considered by scholars to have been one of the finest in the Islamic world.

Much of it was, however, destroyed and later abandoned on Beg’s death (1449) only to resurface once again in 1908. A charming museum and the well-preserved sextant showcase the city’s scientific achievements—a prime treasure is a catalogue containing charts which describe a whopping 1018 stars!

Prophet Daniel’s 18 metre long grave contains his hand; the grave is believed to have been growing in length over the years.

In stark contrast to the city’s medieval exotic charms is the mystical Khoja Daniyar Mausoleum, the mausoleum of the Biblical and Koranic prophet Daniel. His remains, or to be more specific his hand, was brought to Samarkand by Temur. Apparently, the grave has been growing over the years in length to its current 18 metres necessitating the rebuilding of the mausoleum over the centuries.

So who was Daniel? Venerated in Judaism, Christianity, Islam, and the Baha’i Faith equally, he was a nobleman and descendent of King Solomon. He lived during 620 to 538 BC and was taken into captivity by Nebuchadnezzar of Babylon in 605 BC. Daniel was especially gifted in understanding dreams and apparitions. His story is recounted in the Biblical Book of Daniel in the Old Testament.

My own personal favourite place in Samarkand, after the Registan at dusk: the winding lane of Shah-i-Zinda and its magical majolica-faced tombs.

Though Samarkand bursts at its seams with spectacular treasures, each more grand and picturesque than the other, Shah-i-Zinda is its most dazzling architectural jewel. A narrow medieval avenue of mausoleums built over 900 years, its 20-odd tombs are faced with some of the world’s most opulent Islamic mosaic, majolica and terracotta work. These gather around the street’s oldest, innermost, and holiest shrine—that of Kusam ibn Abbas, cousin of the Prophet Mohammed. Kusam is credited with bringing Islam to Samarkand in 676 AD.

According to legend, Kusam was attacked by pagans but did not die. Instead he was saved by Saint Hazret Hyzra and went underground into a well where he is still living. A place of pilgrimage, Shah-i-Zinda, literally meaning “The Living King”, refers to his shrine built in the 11th Century over the fabled well. Most of the tombs date to the 14th and 15th Centuries when Temur and Ulugh Beg buried their families around that of the saint.

Top: Detail, gate to Kusam ibn Abbas’ shrine (1404-05) at Shah-i-Zinda. It reads “The doors to paradise are open to the faithful”; Bottom: The fairy-tale Hazret Hyzer Mosque (19th Century) perched on a hillock near Samarkand’s central market is dedicated to the Islamic saint, wanderer, patron of travellers, and the one responsible for rescuing Prophet Kusam [the Living King]. 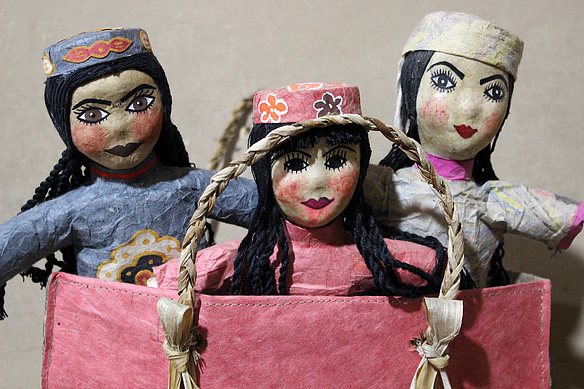 In closing, anyone for a hand-made mulberry bark paper doll to take back home? The art of paper-making was brought to Samarkand from China in the 8th Century and has been revived through UNESCO at Konigil Meros village on the outskirts of Samarkand.

Wouldn’t you agree with me that Samarkand is indeed spectacular and its treasures unequalled? It is a journey larger than life, in more ways than one, and we are forever changed for having made it. Perhaps that is what Flecker meant when he said “For lust of knowing what should not be known, We take the Golden Road to Samarkand.” 🙂

Note: Samarkand was part of my road trip from Nukus to Tashkent in Uzbekistan.

48 thoughts on “the spectacular treasures of samarkand”