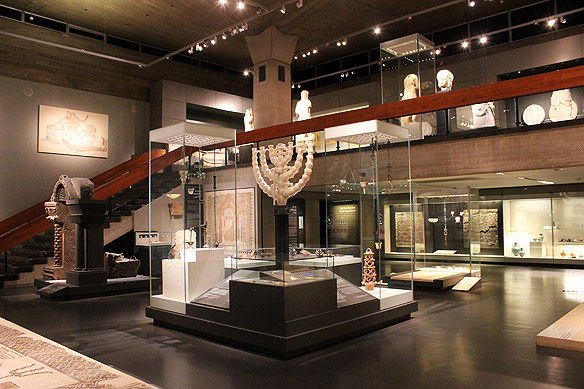 One of the things I truly miss in the ongoing COVID-19 pandemic, apart from simply walking in the open air [even if it is noisy, polluted, and chaotic as Mumbai often is], is spending time in a museum or art gallery. The latter form a large chunk of my me-time on both weekends and in my travels. Cocoons of sweet silence. Their artefacts and art filled with stories of heritage and humankind. Luckily for me, Mumbai thrives on its art and cultural scene. There is lots happening if you poke around.

Over the years, and it has been quite a few, I have also learnt that if you really want to understand a nation and its people, the best place to start is its national museums. The collection, curation and display, and more significantly how the local populace relate to these museums, reveal heaps about its attitude to its own legacy.

No surprises then that a visit to the Israel Museum was high up on my bucket list when I was in the country, last year November. Though open daily, once a week, on Tuesdays, the museum is open from 4 in the afternoon to 9 at night. May I also add, it is the best time to visit. By then the tourists have moved on to other sights and the locals have emerged from their homes to wander around its gleaming halls, filled with a quiet pride.

I wish I could say if there was only one museum you had time for when in Israel, let it be the Israel Museum in West Jerusalem. But Israel is demanding of its visitors. There are two national museums which record the country’s cultural and historical landscape. Israel Museum which celebrates its joys, and Yad Vashem, which pays homage to its tears. Both are part and parcel of the Jewish State, often making it difficult to fathom where the joys end, and memories of the sorrows begin.

You could easily spend a few days at least in the Israel Museum, established in 1965 to house the State’s art and archaeology. It is that big. With 800,000 annual visitors of which a 100,000 are children, 50,000 sq. metres, and a collection of nearly 500,000 objects from prehistory to modern times displayed to their optimum advantage in a US$ 100 million renovated setting, the museum is pure.state-of-the-art.class.

Icing on the cake: On a Tuesday evening, you could have all this to yourself, along with a handful of other cultural aficionados.

Here are my top 15 highlights, from a million years old to the 21st Century, I recommend you spend your time on when at the Israel Museum. Till the real visit, here’s a virtual one, just for you. 😊 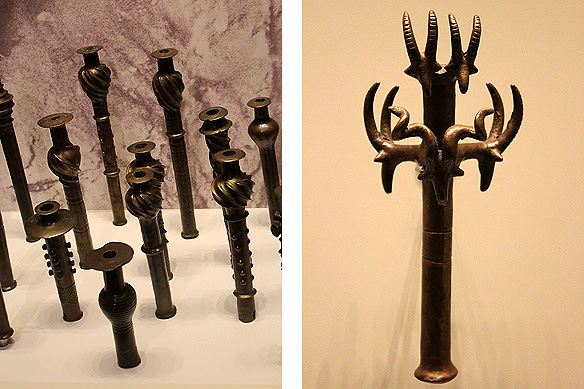 Selection of objects from the Ein Gedi hoard [4500 – 3500 BC, Nahal Mishmar, Judean Desert, Copper]. In a remote cave above Nahal Mishmar, in the Judean Desert, a hoard of 429 ritual objects was discovered in 1961. The objects were wrapped in a woven mat and concealed behind a large stone. They were mainly made of copper with a few in ivory or stone. It is hypothesized this spectacular treasure belonged to a sanctuary at Ein Gedi, 12 kilometres away. Some danger, perhaps, led the priests to stow away the precious objects in the hope that things would get better after a while.

The sceptre on the right is the most elaborate of the sceptres found. It is decorated with four ibexes and one ram—the horned animals prevalent during the Chalcolithic period.

Human-shaped coffins [13th Century BC, Deir el-Balah, Pottery]. Unembalmed bodies of the dead were placed in these coffins along with funerary gifts such as bowls of food.

Head of a statue depicting a king [9th Century BC, Abel Beth Maacah, Faience]. This unique statue has raised many a question from the time it was discovered in 2017 inside a fortress in Northern Israel. Since it was found on the border of three different ancient Biblical kingdoms, one does not know which king it depicts.

Head of a goddess [7th – 6th Century BC, Horvat Qitmit, Pottery]. This one-of-its-kind head was unearthed at a shrine in the Negev Desert. The three horns suggest it represents a goddess, though it is not known which one. She looks like she is smiling, so I like to call her the happy goddess.

Latin dedicatory inscription: … building in honour of] Tiberius … Pon]tius Pilate … Praef]ect of Judea [26 – 36 AD, Caesarea, Hard limestone]. This inscription is the only record from Pontius Pilate’s time that bears his name. Pilate was the 5th Roman Procurator of Judea, better known for sentencing Jesus Christ to his crucifixion according to the New Testament. If it wasn’t for this slab of stone, one could argue he was a figment of Biblical imagination.

Holy Land model of Jerusalem in 1st Century AD [Commissioned by banker Hans Kroch in 1966 in memory of his son, an IDF soldier who died in the 1948 war]. Built on a scale of 1:50, the 2,000 sq. metres model is a recreation of Jerusalem in the late-Second Temple Period based on the writings of the historian Flavius Josephus [37 – 100 AD]. It features a number of notable structures; the remains of a handful which still survive. If you ever wanted to know what the city looked like 2,000 years ago, including Temple Mount, Herod’s Palace, and the Tomb of David, this is IT.

Statue of Roman Emperor Hadrian [117 – 138 AD, Tel Shalem, Beth Shean Valley, Bronze and lead]. A statue of Hadrian believed to have been used for ritual worship of the emperor at a Roman army camp. It is cast in the standardized likeness of the emperor, right down to the unusual shape of his earlobe, a symptom of the heart disease that eventually caused his death. Note the string of archaic warriors on his breastplate, nude except for their galea [helmets], shields, and swords.

Funerary busts [3rd Century AD, Beth Shean, Local soft limestone]. Likenesses of the deceased were commonly placed over tombs throughout the Greco-Roman world. In Israel, however, they only appear in Beth Shean and Samaria, and are a fusion of Roman, Eastern, and local tradition. The names of the deceased are engraved on several statues. I found them sinisterly life-like, smirks and hairstyles et al. Don’t you?

Mosaic floor of a Samaritan Synagogue [4th Century AD, Khirbet Samara (?)]. Since the Samaritans did not recognize the Jewish Temple in Jerusalem, the motif probably represented the biblical Tabernacle or the Samaritan Temple on Mount Gerizim. If you wondering who are the Samaritans, they are the descendants of the northern Israelite tribes who survived the destruction of Samaria by the Assyrians in 722 BC. Though the Samaritans share common roots with Jews, their religion is distinct and to-date practiced in exactly the same way it was 2,800 years ago. 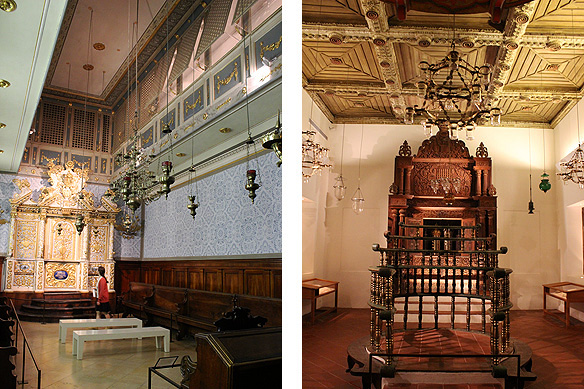 Four original, restored synagogues from three continents illustrate the Jewish religion’s long historical and geographic journey. Filled with a sense of holiness, the synagogue has been the focal point of Jewish life since 70 AD. Before then, it was the Temple on the Mount. Though the key elements are consistent in all four synagogues, it is interesting how local aesthetics were incorporated such as the painted wooden ceiling in Germany and Hindu and Islamic motifs in India. To know more about this exhibit, click here.

Hanukkah collection. Israel Museum’s stunning Hanukkah collection spans all four corners of the world, wherein each country has imbued the ritual object with its own personality. A key item in Jewish ceremonial art or Judaica, the nine-branched candelabrum is lit during the eight-day holiday of Hanukkah. For 2,000 years, from the destruction of the Temple in 70 AD and Jews’ exile from Jerusalem till the creation of the State of Israel in 1948, the Jewish faith lived and survived through its far-flung diaspora, bound together by just two things: The Jewish Calendar and Jewish Texts. 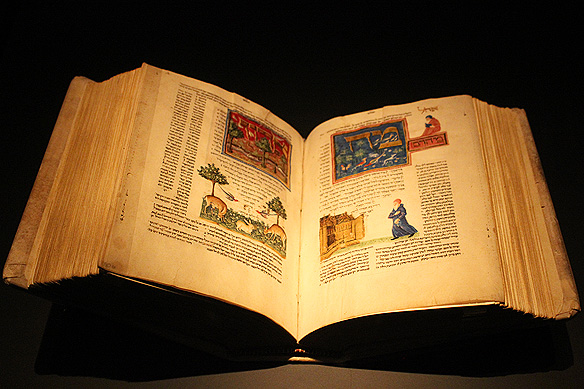 The Rothschild Miscellany [Northern Italy, 1460 – 80 AD, Unidentified scribe]. The Rothschild Miscellany is a unique, lavishly illuminated compendium-manuscript of 37 Jewish texts, decorated with exquisite miniatures in gold and silver leafs and precious pigments. Produced in a master workshop in Renaissance Italy, the 946-pager with over 200 detailed vignettes is a UNESCO-listed Memory of the World and represents the creative pinnacle of Hebrew manuscript painting. 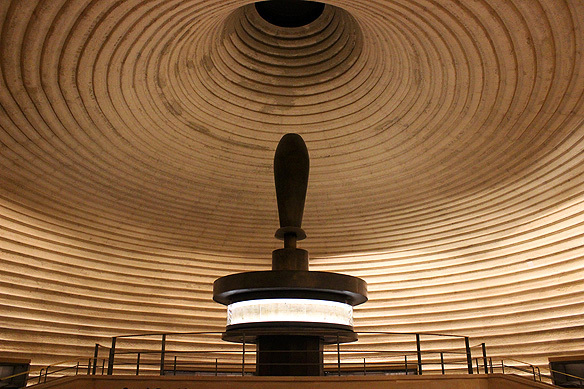 Shrine of the Book to house Israel’s most famous archaeological discovery: The Dead Sea Scrolls. This is THE high point of the Israel Museum. It is also eerily beautiful. Israel Museum’s prized treasure, the Dead Sea Scrolls, are a collection of around 900 ancient Jewish religious and secular manuscripts found inside 11 caves in Qumran, Judean Desert, in the 1940’s. They were written between the 2nd Century BC and 1st Century AD. The wing is designed on the inside to look like a gigantic encased Torah scrolls’ crown. 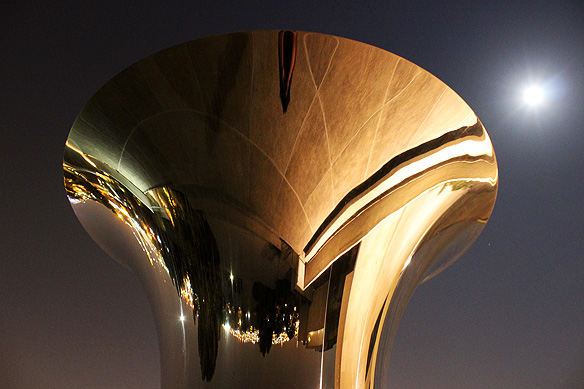 Anish Kapoor: Turning the world upside down, Jerusalem [top portion] [2010, Israel Museum Crown Plaza, Stainless steel, 5 metres height, 5 metres diameter]. I have always been a huge admirer of Mumbai-born UK artist Anish Kapoor’s work. Imagine my joy on seeing this incredible piece by him in the museum grounds. The curved form captures reflections of Jerusalem’s earth and sky, but because of its shape, they are reversed, evocative of the concept of earthly and celestial Jerusalem. A perfect end to my virtual tour of the Israel Museum, wouldn’t you say? ❤

If you have been to the Israel Museum do share what were your highlights in the comments section. I would love to read them!

[Note: This blog post is part of a series from my solo and independent travel to Israel for 15 days in November 2019. To read more posts in my Israel series, click here.]

18 thoughts on “israel museum, jerusalem – tuesday evening at the museum”