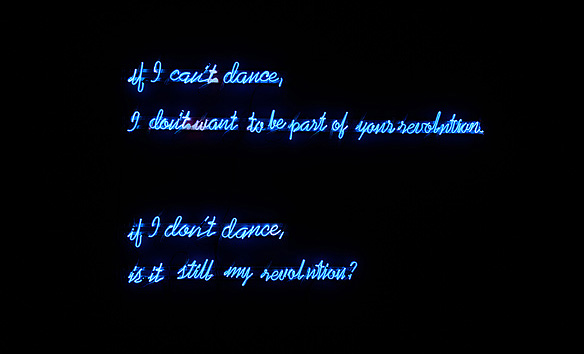 Folding:
Fold, repeat, fold
folding—or doubling—of my thought into yours.
“The inside is nothing more than the fold of the outside”
: announces the fold.

I find myself thinking out aloud: this is what it must be like to step into one’s innermost recesses—where demons and angels reside. Where battles are fought between our limitations and desires, and the uncrowned unvetted winners bask in themselves.

A Delhi-based artist and post-Graduate from the Royal College of Art, London, Sonia Khurana is no stranger on the international circuit. Her string of accolades and exhibitions over the past two decades are testimony to her radical, resistant art and seasoned use of lens-based media. She uses the latter in combination with performance, text, drawing, sound, music, and installation to create a voice uniquely her own. Fold/Unfold is her first solo exhibition in Mumbai.

Let it be clarified from the outset that Khurana’s work is not something you can waft in and out of to put a tick mark against a check box. The oft stipulated gallery visit allocation of half an hour or so does not even scratch the surface in her case.

There is no simple narrative here. Instead it is dense and layered, demanding from its audience a commitment to untangle her multiple “stutterings or stammerings” as she calls them. In her art, Khurana is the artist, subject, as well as her own muse.

So what does the viewer get in return for their effort? Her work offers a revelling in the depths of the human inner world, and at times a fissure sliced into our own darkness. Whether we choose to let some light in or not, into our own darkness, is irrelevant. What matters is the stepping into this space.

Khurana’s invitation to enter her inner recesses commences on a gentle unassuming note with “Surreal Pond I—Epiphany | 2013” and “House Anatomy | 2014” where a pond full of green mist and ants, respectively, regenerate themselves much like living throbbing organisms. There is a hint of the title in the mirroring, made more explicit through a deep red handmade accordion book which reads: The problem is not how to finish a fold, but how to keep folding it.

Look closely and the artist peers through in an eye heavy with insomnia and in another video, anguished, as her pencil-drawn hand claws out the words “start from scratch.”

I look for a bench or something to seat myself in an attempt to absorb the sights and sounds flashing around the room in a loop, but there is nothing. Instead, I find myself sucked into the darkness beyond where behind heavy curtains and in deep niches she recounts her interiority. 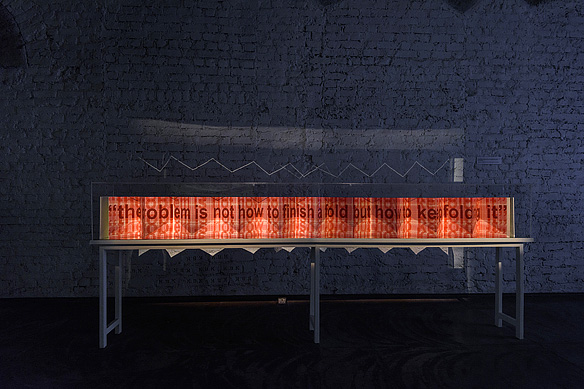 “The problem is not how to finish a fold but how to keep folding it”: Artist’s handmade accordion book with digital drawing and text [part unfolded] [2012]
[Quotation: Translated excerpt from Gilles Deleuze text on the fold] 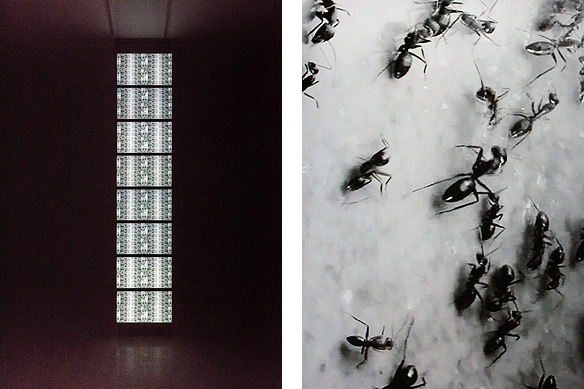 The centrepiece of the exhibition is also her most intense and vivid work. Khurana’s fascination with herself as both subject and muse comes alive here in all its profoundness.

Meanwhile in “Bird | 1999” naked and flapping her arms in a desperate attempt to fly but weighed down by the human form, she explores the enclosing nature of self image and the inarticulateness of the human body. “Bird” is especially key as it places her in the feminist discourse and amongst the key South Asian artists working with digital media.

Behind these, in an inner room, Khurana takes the viewer deeper into her mind. Titled “and the One does not stir without the Other | 2014” the room installation comprises two poignantly beautiful works—Sleep Interludes and Sleep Wrestlers.

The two 16-minute video loops scrutinise sleep as both a phenomenon and philosophical object, using twinned images of her mother [whom she also refers to as M-other] and herself. One is in deep sleep, dormant, and the other in perpetual vigil. The text voice-over recounts in the room’s pitch blackness:

Somnolence, Like each waking moment closing down on her with an iron embrace …
Insomnia, Like someone slowly sitting inside the brain, looking for lost words. 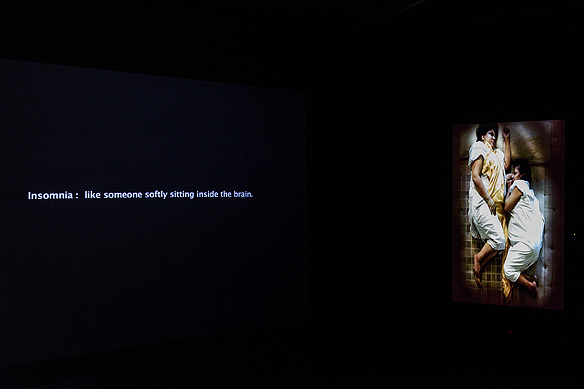 and the One does not stir without the Other : Room installation with moving image, text, voice [2014]

If I can’t dance, am I a part of your revolution – III

The grand finale of Khurana’s provocative exhibition is aptly titled “If I can’t dance, am I a part of your revolution.” It builds on her own understanding of her work as “a stuttering, or stammering, that is involved in evolving a radical resistant self.”

One of her most famous works “Logic of Birds | 2006” takes centrestage here wherein she dons the mantle of an abandoned homeless derelict lying on the ground at different locations pecked on by pigeons. The six-and-a-half minute single channel video projected on the wall is part of her larger project “lying-down-on-the-ground.”

Across the room Emma Goldman’s, a 20th Century feminist and anarchist, famous misquotation glitters in neon lights in mock agreement:

“If I don’t dance, is it still my revolution.”

Conceived in 2006, the project, comprising a series of videos and photographs taken over the years is a proposal to explore an aesthetics based on failure, a profound loss of self and a “device” for entering spaces and cities she has never belonged to. She closes her commentary in it with a gentle invitation to the viewer to join her [on the ground], even if but for a moment, and hence share a space with her, if only momentarily.

The invitation sums up the essence of her showing perfectly. 🙂 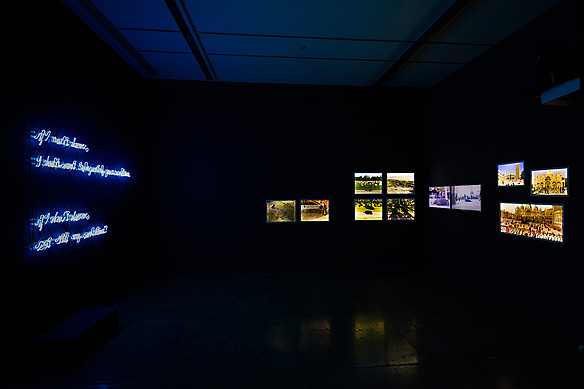 if I can’t dance
I don’t want to be part of your revolution.

if I don’t dance,
is it still my revolution?

Fold/Unfold by Sonia Khurana was on display at the Chemould Prescott Road art gallery, Fort, Mumbai, from 20 January to 25 February, 2017 from 11 am to 7 pm.

[Note: This post is a re-post. It was first published on ramaary.blog on 7 February, 2017. Due to COVID 19 restrictions, I am unable to generate new travel content. In its place I am reposting some of my favourite contemporary Indian artists’ works which I had blogged about earlier.]