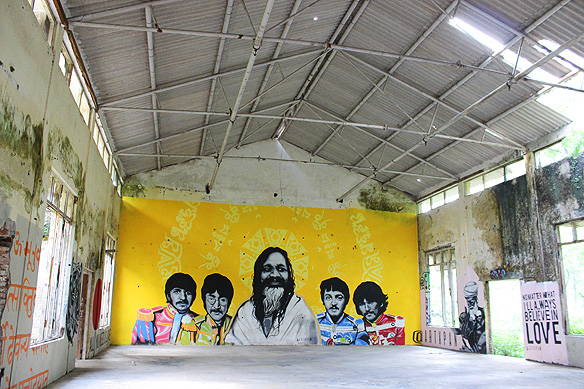 The most fascinating permutations and combinations are often revealed in the most hidden places. Like the street art decorating the ruins of Maharishi Mahesh Yogi’s Ashram in Rishikesh where the Beatles spent the winter of 1968 in search of spirituality and came up with a whopping 48 songs, a bulk of which went into their “White Album.”

The Beach Boys, Donovan, and Stevie Wonder all found inspiration within these walls as well, writing some of their most famous songs here. This period in space and experience has been poignantly captured by the soul-searching art of 32-year-old Pan who refers to himself as a “bhakti yogi and his art as “spiritual pop art.”

Pan’s art peeps through cracks, on the rooftops, and behind staircases of the abandoned Ashram, weaving stories of mysticism and music—meditating yogis, mandalas, a slinking monkey, Arabic calligraphy, hand mudras. The showpiece is the aptly named “Beatles Cathedral Gallery” where monumental neon-coloured images of John Lennon, Paul McCartney, George Harrison, and Ringo Starr are interspersed with Hindu mythological figures and stanzas from their all-time hits. Who can forget “Love is the answer, and you know that for sure; Love is a flower, you’ve got to let it grow.”

You never know what you will come across here. And when you do, the sight is a delight for its sheer simplicity, yet profundity.

Whilst the Beatles need no introduction, who was Maharishi Mahesh Yogi and why did his Ashram fall apart. After all, 50 years is not such a long time in a country where heritage and tradition span centuries in the least, if not millennia. 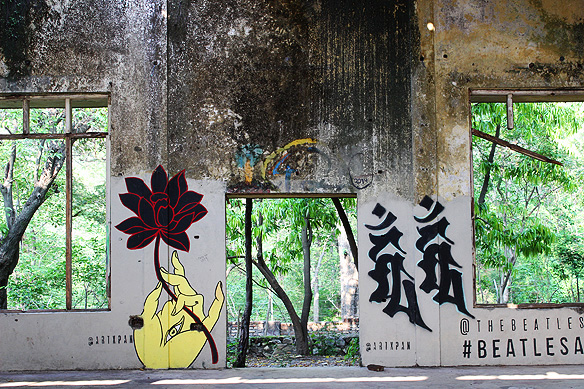 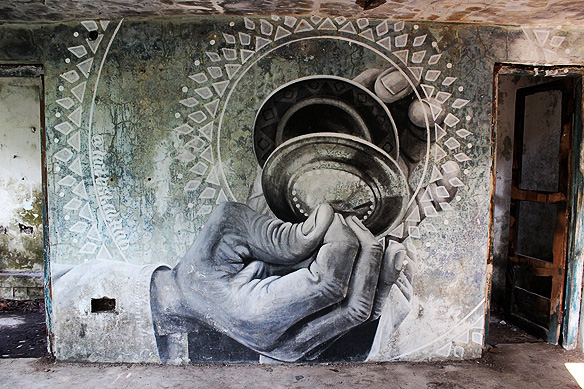 An entrepreneur and spiritual leader, billionaire Maharishi Mahesh Yogi was the Beatles and other Western celebrities’ spiritual guru. He is credited with popularizing meditation in the West. Believed to be born in 1917 [not much is known about his early life], he graduated with a Master’s Degree in Physics from Allahabad University after which he set off for the Himalayas to emerge as a Maharishi, the “great seer.” In the 1990s he relocated his headquarters to the Netherlands, where he died in 2008.

His Ashram in Rishikesh was one of many spanning the globe offering programs in Transcendental Meditation—a simple, effortless technique he founded. Practiced 20 minutes twice a day, the technique is used to reduce stress, enhance brain function, and strengthen immunity.

In the 1960s the Beatles were going through a turbulent period, desperate for stability, answers, and direction. Their ending up at the Ashram to attend a 30-participant Transcendental Meditation teacher training course was almost serendipity leading to an influx of other stars to also knock on the Yogi’s doors.

But nothing is forever. The Beatles broke up and grew old. Their fans, unabashedly fickle, shifted their adoration to brighter and newer stars. The Maharishi decided to move to the Netherlands and set up house in a former Franciscan monastery from where he ran his global spiritual empire till his death, aged 90.

In 1997, thus, the famed Ashram with the Rives Ganges flowing silently behind it was abandoned and let to fall into ruins. The walls caved in. The roofs collapsed. Trees and shrubs grew rampant, both inside and outside the various edifices which once housed the pilgrims and took care of pragmatic affairs such as printing of spiritual texts and cooking of sattvic meals. Until 2012, that is.

2012 is when Pan came up with the idea of the Beatles Ashram Mural Project. He has been returning to India almost every year, thereafter, to add to the project. In 2016 Pan was made the official art coordinator for the Ashram. He, together with acclaimed street artist Miles Toland [who he invited to be part of the project for two weeks in 2016], visitors and the local community have been transforming the dilapidated Ashram into a riot of images ever since.

How many paintings exactly are there inside the Ashram? Pan himself confesses he has no idea for they keep getting added on, repainted and recreated, much like an organic living being with a life all of its own. 😊

Do have a browse through the images in the gallery below of the stunning street art which today adorns the Ashram’s facades, hidden from the casual eye. [Note: Click on an image to enlarge it and read the caption. Use the arrow keys to navigate through the set.] 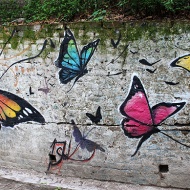 One is aptly met with butterflies as one enters Maharishi Mahesh Yogi’s Ashram on the foothills of the Himalayas in Rishikesh. 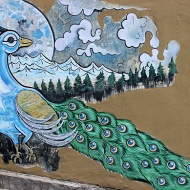 After a lengthy legal battle between the Yogi and the Indian government as to who owned the land, the Ashram, lying on the fringes of the Rajaji National Park, now falls under the Forest Department. 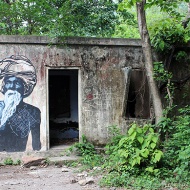 ARTXPAN aka Pan came up with the idea of transforming the ruins into an evolving participative street art museum in 2012. This 7-feet high bearded Sadhu with a Chitari Mandala over his heart is his personal favourite. [quote source: homegrown.co.in] 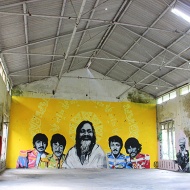 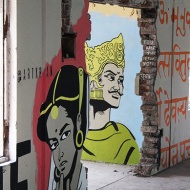 Hindu mythological figures, portraits of the Beatles, and typography form an eclectic mix in the Beatles Cathedral Gallery. 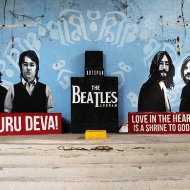 The “stage” at the Beatles Cathedral Gallery with who else but the stars of the show. 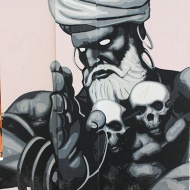 A Sadhu with a six-pack, skulls around his neck and glaring eyes in a Kung Fu pose, stands guard in one of the Gallery’s inner walls. 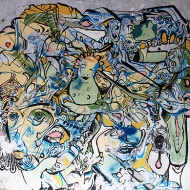 This stunner is inside Anand Bhavan and Siddhi Bhavan which once upon a time functioned as hostels. Look closely and be prepared to be boggled by its details! 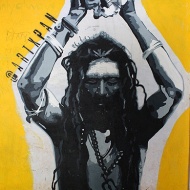 More Sadhus. More skulls. The mystic-skull composition is derived from Shiva’s iconic representation which is emulated by his followers. 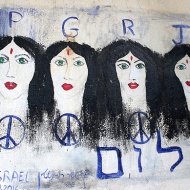 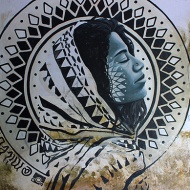 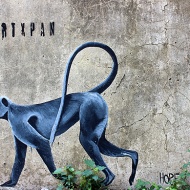 I almost did not notice this fellow silently walking past the side wall of Siddhi Bhavan. 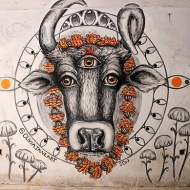 This is one of my absolute favourites. The three-eyed garlanded cow by @oliviajaneart, 2017. 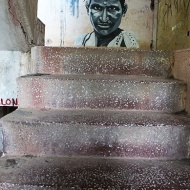 The flight of stairs inside Siddhi Bhavan reveals this. Yes, Carpe Diem indeed. 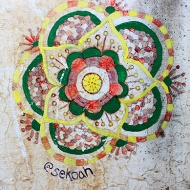 Mandala art of another kind by @sekoah. 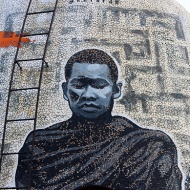 You have to climb all the way to the terraces of Anand Bhavan and Siddhi Bhavan to see these wondrous works of Sadhus and monks deep in meditation painted on the egg-shaped meditation cells. 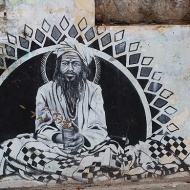 “Morning Chai” by Miles Toland. Toland takes his inspiration from the street culture of Rishikesh, transposing it into enigmatic works of art. 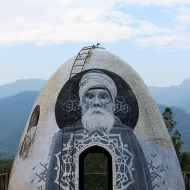 Whilst the painting of the Buddhist monk is by ARTXPAN, this one of the Sadhu at the other end of the terrace is by Miles Toland. The setting. The art. The silence. Toland’s “Eggman” gave me goose bumps. 😊 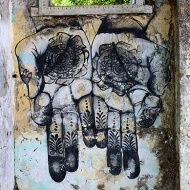 The third cluster of graffiti decorates Chaurasi Kutiya, an ensemble of 84 meditation huts. Watch out for Pan’s ethereal hand mudras … 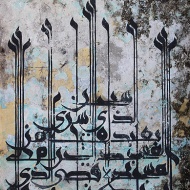 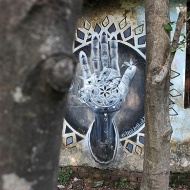 “Blessing” by Miles Toland. A work which beautifully summarizes the hidden graffiti of Rishikesh. ❤

[This post is a re-post. It was first published on ramaary.blog on 16 July, 2018. Due to COVID 19 restrictions, I am unable to generate new travel content. In its place I am reposting some of my favourite posts which I had blogged about earlier.]

15 thoughts on “photo essay: the hidden graffiti of rishikesh”