What happens when a sedate neighbourhood for government employees comes face-to-face with passionate street artists from across the world—Lodhi Art District happens. 😊

A leafy residential area dating back to Edwin Lutyens’ 1940s New Delhi, Lodhi Colony is characterised by wide streets and housing blocks encased in lofty colonial arches and vast facades. Unlike most of Delhi, it is relatively traffic-free—the perfect setting for an open-air art gallery, is what St+art India Foundation figured in 2015.

And so, over the years, street artists from across the world and India, were invited to transform its faded vanilla walls into riots of colour. At times the art was loaded with thought-provoking messaging, and at others about the simple truths of life. But always, magnificent in their aesthetic beauty.

There are some 60 street art works scattered over the neighbourhood, as of December 2022. You would need a whole day to see them all. Of these, 16 are drop-dead dazzling, and my absolute favourites!

I have included a link to a google map prepared by St+art at the end of this post to help you locate these paintings, along with a link to their official [free] audio guide available on HopOn India.

Here they are, the best of Lodhi Art District’s lot. Be prepared to be bowled over. ❤ 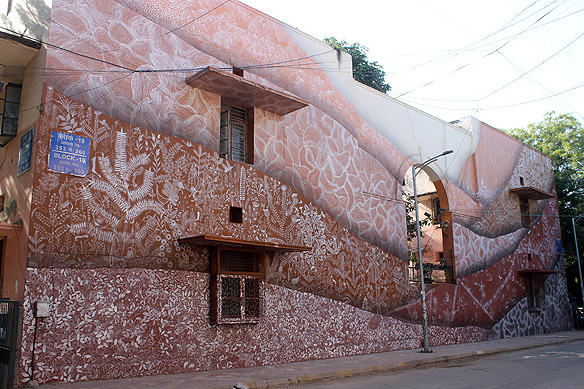 1. Warli Mural by Warli artist duo Mayur and Tushar Vayeda [India], September 2022
The newest art on the block, literally, is the stunning rendition of Sahyadari Valley, homeland of Warli art, in which each mountain layer depicts a different element of nature—from earth to water to fire. Part of St+art’s ‘From Craft to Contemporary’ project, it aims at integrating traditional art forms with the modern and urban. May I also add, it is goosebumpingly beautiful.

2. Terracotta by Tellas [Italy], 2019
Terracotta in Italian means Baked Earth. Earth shades and shadowy leaves create a world of organic unity with nature in this mural. A reminder of the need to connect with the oasis of peace nature offers, especially when living in a concrete fast-paced jungle. 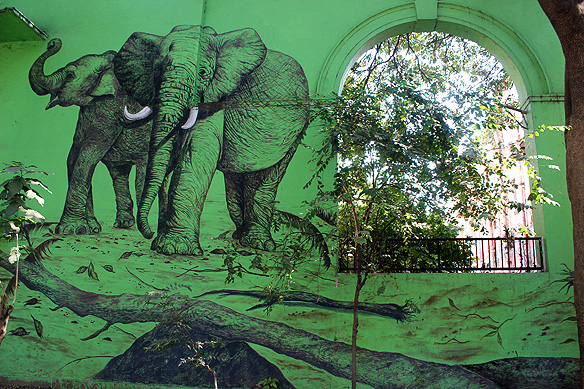 3. Gracious Heritage by Majlis Art Forum [India], 2019
One of Lodhi Art District’s loveliest works, the deep greens, monochromatic figures, and combination of painted and live trees create a magical realm, albeit a few metres wide only. It is both, a celebration of the city’s pockets of nature and a reminder of the fast-disappearing Asian elephants as a result of rapid urbanisation and pollution. 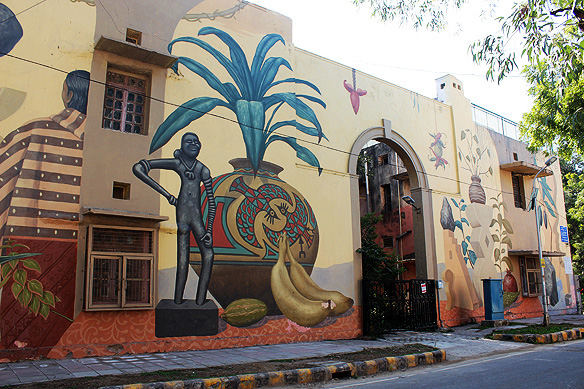 4. The Sacrosanct Whole by Aaron Glasson [New Zealand], 2019
Everything, even the smallest of entities, has an inherent life force. This belief permeates the eclectic mix of seemingly disparate elements such as the Dancing Girl from the Indus Valley Civilization to totem poles, from fruits and vegetables to stones, all bound together in their common sacred nature. 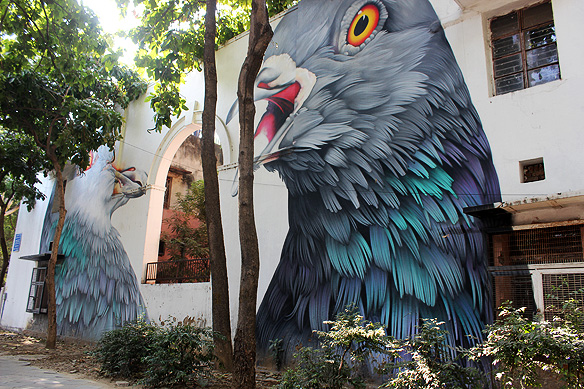 5. These Rock Pigeons Chose the Trees by Adele Renault [Belgium], 2019
Pigeons, seemingly ordinary, have been the subject of Adele’s work over the years in which she paints them with vibrant photo-realism. In Lodhi Colony, these birds take on monumental proportions, flooded with light, replete with layered eyes and brilliantly-hued feathers on either side of the towering arch.

6. Letters for Lodhi by Yok and Sheryo [Australia and Singapore], 2019
Inspired visually by vintage Indian matchboxes, the mural is embedded with a series of cryptic messages. At one end it nudges the viewer to take a critical eye on words such as Justice and Equality. In the same breath, it flanks the archway, labelled Gupt Dwar or Secret Door, with the words Fortune and Health, referring to the area’s cultural riches.

7. Impressions of Lodhi by Yip Yew Chong [Singapore], 2019
Whilst most neighbourhoods in Delhi have become individual-centric, Lodhi Colony still retains much of its old-world simplicity. Even today, children study on open terraces and the flute-seller winds his way amongst the lanes. Through the mural, which engages the viewer at eye-level, the artist pays homage to the Colony’s community life. 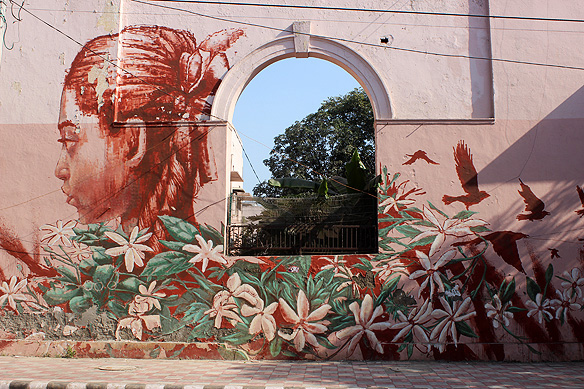 8. Flowers of Dharavi by Alaniz [Germany], 2019
Constantly on the move, Berlin-based Alaniz finds his inspiration from his travels, painting large-scale portraits of people he meets along the way. His work in Lodhi Art District, likewise, features the portrait of a girl he had met in Dharavi, Mumbai, reminiscent of a meeting which held warm memories for him. 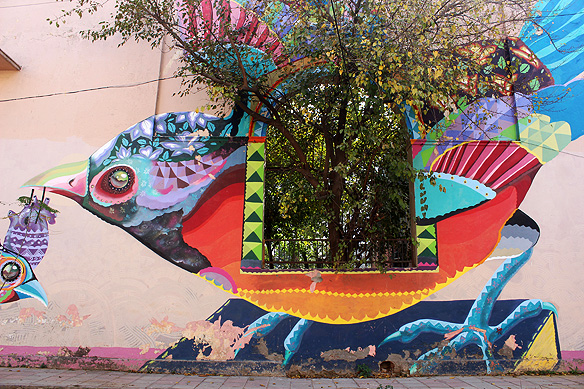 9. Colours of the Soul by Senkoe [Mexico], 2016
Seen as symbols of diversity, identity, and freedom in various cultures, birds form the essence of Senkoe’s colourful mural which draws upon Indian and Mexican motifs to create a unique blend. Migratory travellers, these birds see and experience multiple places, their souls rich with stories to tell.

10. Sans Serifs, No Letters by Shoe [Netherlands], 2016
Sans serifs, no letters
and no words to read
Sans words, no signs
no names in the streets
Just rows of buildings
and gardens, sans weeds

For this mural, Shoe did something he had never done before. He painted a poem he wrote himself, and that too in his inimitable Calligraffiti style. To further buttress his message, he used traditional Indian brooms made of dry grass for the design elements.

11. Balance in Mind and in Spirit by Saner [Mexico], 2018
Using traditional Mexican motifs to connect with different countries and cultures, Saner attempts to create a ‘oneness’ in the world. In India, he expresses it through a man and woman dressed in a mix of Indian and Mexican traditions, surrounded by flora and fauna of the two countries, and topped with his trademark open floral heart. 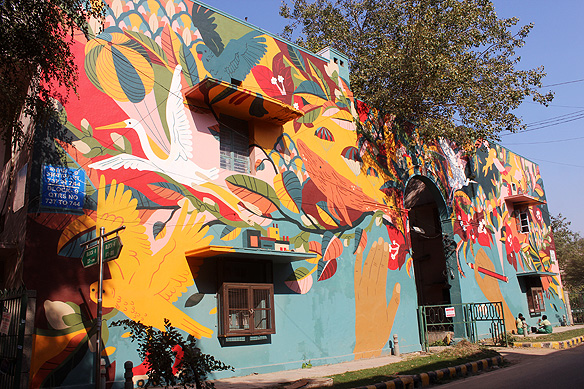 12. Fish Out of Water by Greta Von Richthofen and Aashti Miller [Germany and India], 2022
An extension of a mural in Chennai, also by the two artists, this one in Lodhi Art District explores the world of imaginary travel induced by the curbs placed during the pandemic. Through flying and running fish and birds, the artists explore the world of travel, and the importance of cultivating inclusive and diverse perspectives if one wants to have an enriching and meaningful life. 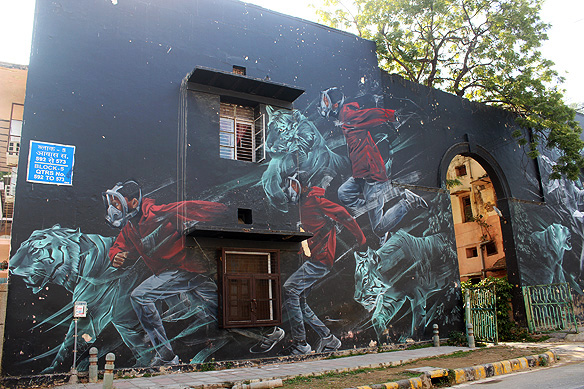 13. Visions of Altered Landscapes by Aaron Li Hill [Canada], 2018
Climate change and its ramifications are as relevant in India as it is across the globe in Canada. To the left of the arch, an Indian boy and tiger represent the eastern part of the world, whilst a polar bear and woman to the right represent the west. The strong movements and speed indicate optimism and that all is not lost if we move fast enough towards a solution.

14. Dilliwalle by Bhajju Shyam [India], 2019
Padamshri awardee, author, and an exponent of Gond art, Bhajju belongs to the Gond tribe in Madhya Pradesh. His Dilliwalle, a pun on Delhi’s residents, was painted as part of St+art’s ‘From Craft to Contemporary’ project. It likens the city’s folks to foxes, street smart and living in packs. Not exactly the best of compliments. 😀

15. Shakti by Sajid Wajid Shaikh [India], 2019
Placed strategically in front of a secondary school, the mural is an ode to womanhood and motherhood in the Art Nouveau style. Elegant and feminine, it comprises a series of women portraits intertwined with nature, wherein women are seen as creators of life, much like nature itself.

16. Trans Lives Matter by Aravani Art Project [India], 2019
Yes, Trans Lives matter. Just like all lives do. In the same row as Shakti above, and facing the secondary school as well, the mural was painted by eight trans-women and several volunteers. The aim was straightforward: to break gender-initiated binaries and bring to the forefront resilient identities in a prejudiced society.