The north is the historic heartland of China. Chinese civilisation first blossomed along the lower reaches of the muddy Yellow river. The provinces of Shaanxi and Shanxi in the north are stained with the yellow earth that die the Yellow river ochre. As China’s cradle, the north is unequivocally Han in custom and folklore, possessing a cultural continuity. All Chinese traditions flow from this northern fountainhead.

The revered and eternal city of Xi’an, capital of Shaanxi province, is one of China’s most important monuments. The city grew considerably under the first emperor of the Qin. The affluent Silk Road began here during the Han dynasty (206 BC-220 AD). Later incoming foreign emissaries brought with them an Islamic flavour that still lingers today. It has been the national capital of 11 dynasties; its zenith was reached in Tang dynasty China (618-907 AD) when it was called Chang’an. The Tang city grid pattern still survives in Xi’an today, as does a considerable quantity of celebrated architecture.

I loved Xi’an. From the moment I arrived. Bare of modern gilded trappings, the city resonates with timelessness. A thin cloud of yellow dust hangs over the scorched arid lands. This is Asia. The real Asia. With the noise, heat, dust, chaos and a throbbing vitality. My bus broke down on the way from the airport. An apt start. So I sat on the pavement waiting for alternate transport as rickshaws, loaded trucks, battered cars and endless bicycles raced on in mindless fashion. Xi’an reached out to me with open arms. Unpretentious. Earthly. Warm. I embraced it back, unreservedly.

I spent my first evening in Xi’an walking around the lanes hemming in the Big Wild Goose Pagoda, finally sitting at the feet of Xuan Zang’s statue, gazing at the pagoda as it slowly bathed itself in golden lights whilst twilight fell and both moon and stars came out to grace the ethereal lilac skies.

The Big Wild Goose Pagoda was originally built by Emperor Gao Zong in 648 AD in honour of his mother and was the most famous temple in Chang’an. Xuan Zang, the renowned Buddhist emissary who collected scriptures from India managed the temple. The Pagoda stored the hundreds of volumes that he brought back and was rebuilt in its current avatar as a square, brick pagoda during the reign of the most notorious empress in Chinese history, Wu Zeitan. A wicked and deceitful manipulator, she rose from imperial concubine to empress and reigned from 698 to 705 AD, when she was forced to abdicate.

I saw a group of Chinese practising choral singing by the edge of the square. I walked towards them to watch, to listen. Instead I was asked to join in. I did not know a word of Chinese, but somehow managed to articulate sounds loud and clear that went with the singing, clapping and dancing, completely forgetting my own foreign self. I only reverted back to reality when on finishing I looked up and around to see masses of people from all over the square having gathered around, clapping, gazing at me with humour and warmth. My own sacred moment of infinite fame. Singing Chinese songs in an ancient square in the heart of Chang’an, amidst everyday ordinary human love.

The Chinese have many fine qualities, but their sense of enterprise is the most laudable. Most shopkeepers do not speak a word of English. Especially so in Xi’an. Yet as I entered the small shops lining the old walls, I would witness the greatest of all sales’ pitches. A piece of hand-written paper would be thrust under my nose, reading as follows, “Hello, welcome to my shop. My name is Jackie Chan. We sell etc. etc. what would you like to buy. Would you like to buy paintbrushes. Yes? We have many. This one is made of a mouse’s whiskers. This from a weasel’s tail. And this from a leopard…”, and the shopkeeper would follow me around with a calculator in his hand, grinning cheek to cheek, jumping to attention every time I even glanced at an object, whilst his children followed him with their supper and running noses.

Army of the Terra-cotta Warriors 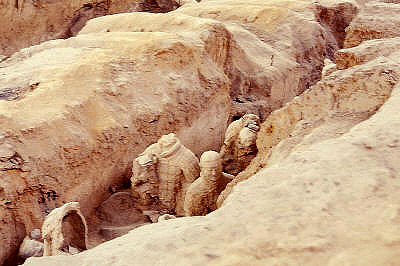 The 2,200-year old army of 8,000 life sized terra-cotta warriors were tasked with protecting the tomb of Emperor Qin Shih Huangdi

Stumbled upon by peasants digging a well in 1974, the 2,200-year old army of the terra-cotta warriors is a fascinating record of artistic achievement and an ostentatious expression of imperial power. Emperor Qin Shih Huangdi united China for the first time under the rule of the Qin and embarked on a series of huge construction projects including the Great Wall. The best preserved of these undertakings is undoubtedly the army of terra-cotta warriors, interred within the outer wall of the emperor’s mausoleum [which was built during his lifetime] as his eternal imperial guard, and took 37 years and 720,000 slaves to build.

The thousands of pottery warriors stand inside three vaults. These were originally covered with wooden roofs under a layer of earth. Strangely, no historical records acknowledged the existence of the army, so they were lost to time. The tallest warrior is over 6 feet tall, and all were equipped with still-sharp weapons—swords, spears, crossbows, and longbows [the weapons have since been removed to the museums]. Soldiers and horses were modelled from yellow clay and painted after firing, but the paintwork, which must originally have been vivid and colourful as can be gathered from remaining traces, has now faded almost completely.

The main army stands in Pit No. 1; 6,000 of the 8,000 soldiers and horses are here. Walls roughly 2.5 meters wide separate the silent ranks. The bodies of the warriors are identical and hollow from legs up. The head and hands of each, however, were modelled individually and then connected to the bodies. In 1980 the vault was opened to the public.

Pit No. 2 was discovered in 1976. Buried here are chariots, cavalry, and statues of infantrymen, but for the most part all that can be seen is the outline of the roof. The vault is still being excavated. Pit No. 3, the smallest vault containing three chambers, holds 68 soldiers and a war chariot. The figures appear to be high-ranking officers because they are dressed in more elaborate costumes than the infantrymen in Pit No. 1.

Near the warrior’s site is the Qin Warrior Museum, its primary attraction being a pair of highly detailed bronze chariots unearthed 20 meters west of Qin Shih Huangdi’s tomb. The tomb itself is yet to be excavated. For the present it remains a pile of earth.

The terra-cotta warriors take one quite by surprise. No matter how much one reads about them or sees pictures, the immensity of the whole enterprise and the creative spirit that adorns each effigy still overwhelms. I spent the morning wandering through the pits, gazing down at the figures, some whole, some toppled over by earthquakes, their vacant eyes gaping at me, inexpressive, yet seeming to tell me a million things about life and time.

In between visiting the excavated pits I saw a 360 degree movie on Qin and the warriors. It was brilliantly crafted and dramatic, transporting one back 2,200 years in a mere few minutes, bringing alive the mighty emperor and his army of warriors created to protect him beyond life and death, into eternity.

Rest of the day

The Banpo Museum celebrates the Banpo period (4800-3600 BC) of the neolithic and matriarchal Yangshao culture that itself lasted from around 5000-2800 BC. This culture saw the dawn of China’s painted pottery tradition. The museum contains various interesting pottery pieces along with weapons and needles.

The hot mineral springs at Huaqing first became popular in the Tang dynasty when emperors visited its complex of bathing houses and pools. You can still drink a glass of hot water or splash your face with it for a mere 50 cents. The waters are believed to have great beautifying powers. Small price to pay for such wonders. 😛

The day ended with a Tang dynasty show over dinner. It was absolutely beautiful. Tang culture was a high point in China’s history. The soulful music, graceful dances, acrobatic warrior leaps, and clash of cymbals amply justified the claim.