The north is the historic heartland of China. Chinese civilisation first blossomed along the lower reaches of the muddy Yellow river. The provinces of Shaanxi and Shanxi in the north are stained with the yellow earth that die the Yellow river ochre. As China’s cradle, the north is unequivocally Han in custom and folklore, possessing a cultural continuity. All Chinese traditions flow from this northern fountainhead.

The revered and eternal city of Xi’an, capital of Shaanxi province, is one of China’s most important monuments. The city grew considerably under the first emperor of the Qin. The affluent Silk Road began here during the Han dynasty (206 BC-220 AD). Later incoming foreign emissaries brought with them an Islamic flavour that still lingers today. It has been the national capital of 11 dynasties; its zenith was reached in Tang dynasty China (618-907 AD) when it was called Chang’an. The Tang city grid pattern still survives in Xi’an today, as does a considerable quantity of celebrated architecture. END_OF_DOCUMENT_TOKEN_TO_BE_REPLACED 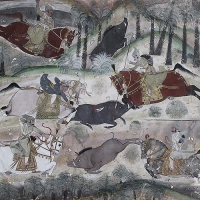