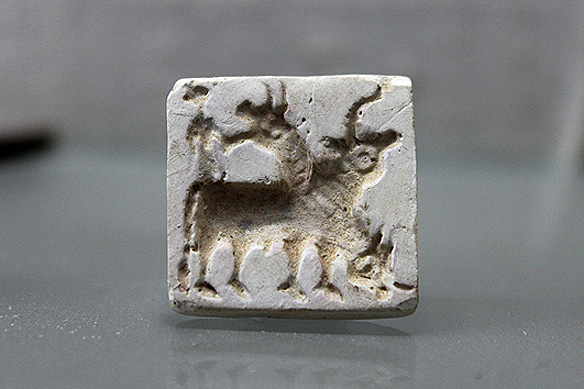 “At the height of our civilization, our technological development, our social and material complexity, all signs point to progress, we often think. And yet, all is not as it seems and once in a while it occurs to us to look into the past to discover our future.”

The above lines, read in the adjoining museum, accompany me as I walk into the majestic and isolated ruins of the 4,500 year old Harappan city of Dholavira. There is a hushed stillness all around. The only sounds I can hear are the birds chirping in some distance, and my guide’s quiet voice pointing to some detail or the other. The sun beats down on both me and the dusty stones strewn over the site, the latter telling me stories long forgotten and now valiantly being attempted to be reread and understood. I am in the north-east corner of Kutch, on the island of Khadir surrounded by the Great Rann.

Known locally as Kotada Timba, Dholavira is one of the fifth largest of 700 Harappan (commonly known as Indus Valley) civilization sites built over an expanse of 1.25 million square kilometres stretching across India, Pakistan and Afghanistan. Discovered in 1967 by the Archaeological Survey of India, it is also the most prominent in India. Lying between two seasonal channels, the Manhar to the south and the Mansar to the north, the fortified city was an important centre of trade between Gujarat, Sindh and Punjab on one side and Western Asia on the other.

The Harappan Civilization, and along with it Dholavira, started in 2650 BC and ended around 1450 BC, abandoned only briefly in 1900–1850 BC to be reoccupied again; the period divided into seven stages of occupation. It was a Bronze Age civilization flourishing in the basins of the Indus River, and together with Ancient Egypt and Mesopotamia comprised the Old World. A population of five million is believed to have inhabited it during its heydays.

The Indus cities are predominantly renowned for their urban planning, elaborate drainage systems, water supply systems, baked brick houses, and clusters of large non-residential buildings. The Harappan script still remains undeciphered and one wonder what stories are hidden in its almost 600 distinct symbols which every now and then peep through its various findings.

The significance of Dholavira

What makes Dholavira stand out from other Harappan cities is its continuous occupation over all seven stages of the civilization, its meticulous urban planning, and monumental architecture in dressed stone. But most of all, its distinctiveness is in its hydraulic engineering system inside the city walls consisting of a series of reservoirs, ponds and channels cut out from living rock. The system, one of the earliest in the Old World and completely made of stone, filtered water according to its end usage: drinking and cooking, bathing, irrigation.

The reservoirs stored rain water or water diverted from the two nearby seasonal rivers, thereby ensuring there was a continuous supply of fresh water in an area which still suffers intermittent drought. 16 reservoirs were built. Three have been excavated to date.

Like most Harappan cities, the city plan (771 metres long X 617 metres wide) comprises a citadel (‘castle’ and ‘a bailey’), a middle town, and a lower town, each individually fortified lying within an outer fortified wall. Though built on 49 hectares; remains have been found over an area of 100 hectares.

Interestingly, when reoccupied around 1850 BC, the inhabitants, instead of taking the civilization to new heights chose a simplified deurbanized life, living in bhungas almost as if in preparation for the forthcoming end. And it seems to me, if I were to lend a closer ear, life lessons lay in the ruins’ space between past and present here. Today, I can honestly say I had my best history lesson ever. 🙂 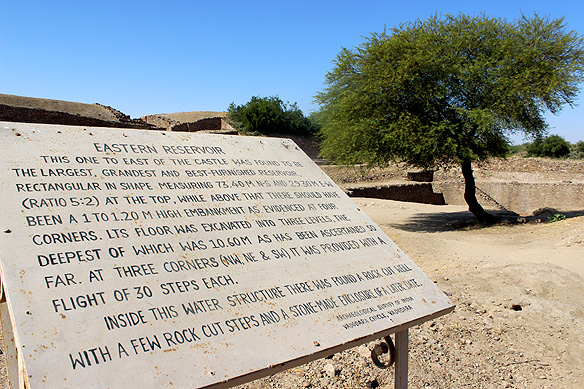 The Bhunga styled edifices from the later Harappan deurbanized period

Staircases, lanes and buildings. 4,500 years ago. Some things never change

A series of 16 reservoirs skirt the city, 79 meters long and 7 metres deep cutting through rock vertically 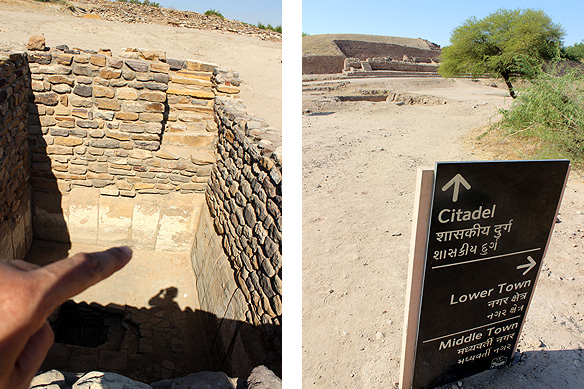 Left: A water well with a plug for draining water out; Right: My last good-bye view of the site