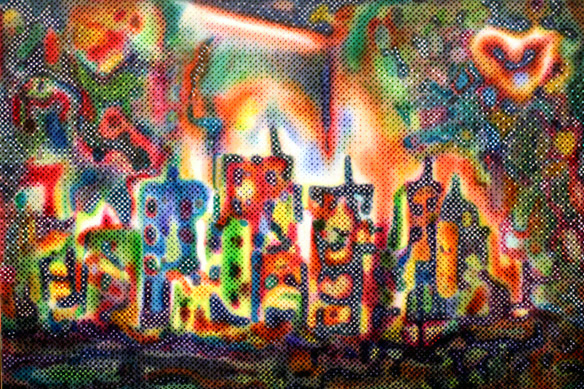 It is as if a rainbow had burst and spread its colour, both over vast mounted canvases and minute egg tempered paper boards, alike. I stand in the grey walled halls of Chemould Prescott Road and blink. And then gawk.

As I step closer, yet another world unfurls—a satire rooted in broadsheet cartoons morphed into the artist’s personal commentary on recent social and political events and personalities in India. I recognize Arvind Kejriwal, Manmohan Singh and Narendra Modi. I see athletes and war zones, Jesus Christ and Hindu priests.

Anant Joshi, a Mumbai based artist from Nagpur sees himself as a masquerader in his current exhibition, the outcome of his diligent research and analysis of newspaper cartoon strips over the past year. Masquerade and other Apologues is a collection of paintings, watercolours and melted toys—yes melted toys—which recount a political and visual spoof of the world we live in.

Broadsheets
The showing starts with a series of huge canvases alluding to large format newspapers. The compositions are based on toys which Joshi abstracts with ‘Ben-Day Dots’ to create visions of colour much like Roy Lichtenstein, well-known American pop artist from the 1960s used in his comic strip paintings.

A little technical background here for the uninitiated. 🙂 The Ben-Day Dots printing process is a technique dating back to 1879. It is named after illustrator and printer Benjamin Henry Day, Jr. Ben-Day Dots are different from halftone dots in that they are always of equal size and distribution in a specified area. Small coloured dots are spaced closely, widely or overlapped depending on the desired effect, colour and illusion required.

The dots in Joshi’s canvases obstruct their content, giving me pixelated images of overblown graphics. I need to move back for it to make sense. Which is what Joshi wants from his viewer, here. 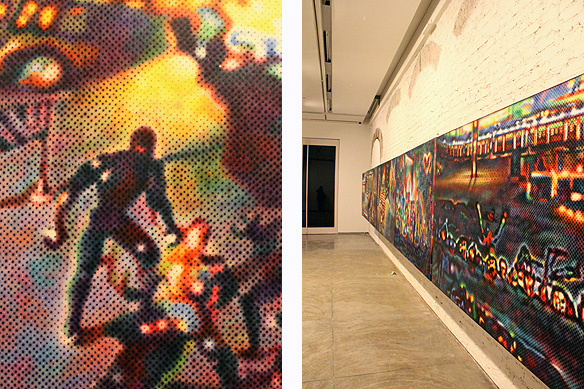 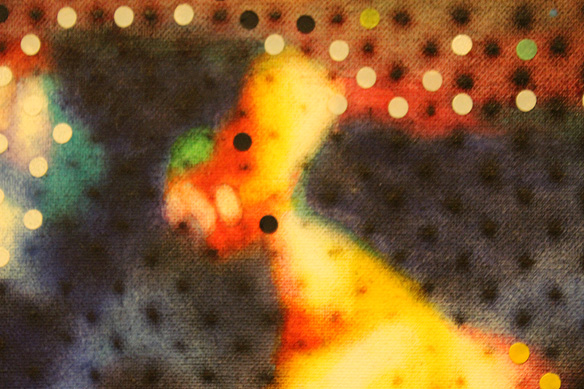 Political and visual satire
The highlight of the exhibition is the collection of 26 watercolours on hand-made paper, where, in contrast, I am demanded to peer into. Each, jewel-like in its detail and colouring, is a wordless apologue originating from political cartoons by well-known social critics. They explore scandals and changing power dynamics over the past one year illustrated by cartoonists such as Kureel, Mika, Shreyas, Surendra, Satish Acharya, Keshav and Manjul.

Joshi transforms these caricatures into his own personal expressions of dissent by erasing the speech balloons and infusing the figures with dense layers of watercolour. What emerges are a series of satires which are incredibly beautiful visually and rich in story-telling.

The paintings, sized at 8.5 X 12 inches, are ‘untitled’. Befitting I would say, for a title would merely put them in a box. Untitled, they are open to being absorbed into the viewer and analogies derived, each to his own. 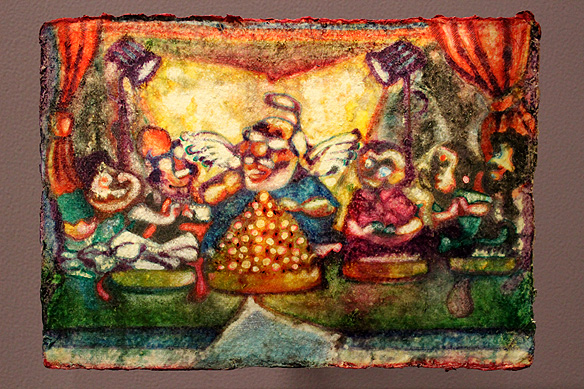 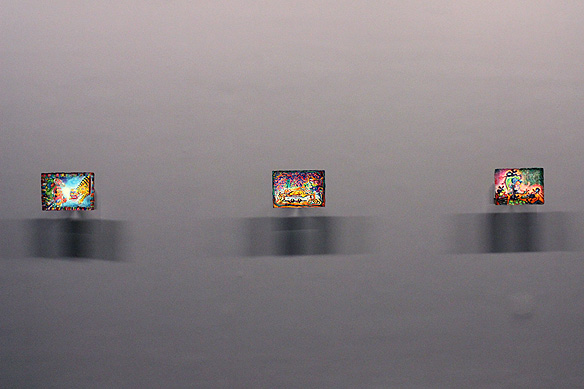 The Weathervane
The exhibition culminates with The Weathervane in which Joshi’s penchant for toys and his interpretation of them as cultural programming for the next generation takes on another manifestation. Joshi apparently never had toys as a child; his relationship with them is hence from a purely adult lens stripped of childhood romanticism.

While the Ben-Day Dots broadsheets use toys as images for a painted composition, surreal and pleasing, here they are in their original plastic form but recast into distorted blow torched versions of themselves.

The grotesque, closely compiled figures amass into vibrant sheets of a weathervane topped by a heavy stone boulder of despair. The weathervane is Joshi’s depiction of the media’s ‘change in weather’ from opinions and stands it took a decade ago, moving towards the right. The burst rainbow cascades its colours here as well. 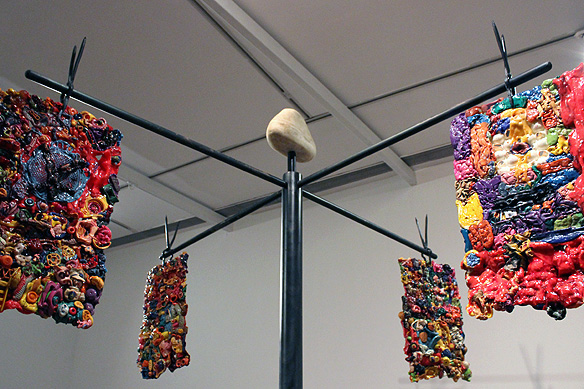 Recipient of various awards including the Bendre Husain scholarship and Bombay Art Society award, Joshi has been a resident at the Rijksakademie, Amsterdam and the Prix de Rome award and research residency. He has exhibited widely, both in India and globally.

Masquerade and other Apologues was on display at the Chemould Prescott Road art gallery, Fort, Mumbai, 15 January to 14 February, 2015, from 11 am to 7 pm.