[My below post was published in the November–December 2016 edition of Druk Air’s in-flight magazine Tashi Delek. All proceeds from my fees went to support the Ability Bhutan Society, a charity supported by Her Majesty the Gyaltsuen in aid of persons living with moderate to severe diverse abilities.]

Imagine. Imagine a city, a functioning capital city, with all its chores of running a nation perched high up in the Himalayas, bereft of any street lights, and one which made its debut in international tourism and on the “world stage” as recently as 1974. Before that, you and I would not even have been able to cross its borders.

Imagine a city with multinationals and media houses, where architecture, culture and everyday life wear the mantle of Tantric Buddhism. By law, buildings are mandated to be modelled on traditional lines, replete with symbolic paintings. Bhutanese have to dress in local attire.

Imagine a city where there are national tournaments in archery at the national stadium coz, yes, archery is the national sport. Monks are not allowed to take part in archery. They play another sport in its place—daygo which involves throwing flat circular discs.

Till the 1960s schooling was limited to religious studies in monasteries. Bhutan lifted its ban on the Internet in 1999. It was the last country in the world to do so. Mobile telephones were introduced in 2003. The only way to reach Thimphu is by road [it does not have an airport].

For all the above reasons, and many more, Thimphu is worth that extra set of miles. It was, definitely, worth mine.

Thimphu was not always the capital of the Kingdom; the historical capital is Punakha. It was officiated into its current role in 1961 by Bhutan’s 3rd king Jigme Dorji Wangchuck. Prior to this it was a bunch of placid hamlets by the banks of the Wang Chhu river in a valley dotted with monasteries, lhakhangs [temples], and dzongs [fortresses]. These hamlets live on as districts of the new city.

As a capital, Thimphu not only plays a key role in the country’s governing and political affairs, but also in its religious matters. Bhutan’s main monastic body comprising 1,160 monks is headed by a chief abbot [presently Je Khenpo]. He spends six months in Trashi Chhoe Dzong in Thimphu and the other six months in Punakha Dzong. He, together with his council of ecclesiastical affairs, run all institutions associated with the spiritual. The king and the parliament take care of the secular.

So what will this city be like in the future? Hopefully it won’t be a cloned version of the rest of the world. The current development plan for 2027 intends to make most of the city car-free pedestrian zones with motor vehicles restricted to its edges. Construction is already not allowed within 30 metres of the river. But why wait till 2027?

I thought I’d share my memories of Thimphu as I travelled through Bhutan on a road trip earlier this year, a tad differently. I am using a photo gallery for the very first time! Click on any of the images, and it should get a slide show starting. Enjoy. 🙂

I got to take this picture by pure chance. One minute the bridge was empty. The other minute they were there. A monk, and mother and child, crossing a traditional cantilever bridge. Bhutan’s ancient bridges are made up of immense, interlocking wooden structures, and have carried human and animal traffic for centuries. 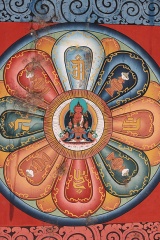 Overseeing the Thimphu valley, bestowing blessings, peace and happiness on the whole world, is the ‘Made in China’ Buddha Dordenma, a 51-meter tall bronze Sakyamuni statue filled with 125,000 smaller statuettes of Buddha, and a huge chapel inside its base. The site is to be completed in 2016.

Four pilgrims, one too shy to be photographed, Changangkha Lhakhang.

The 12th Century Changangkha Lhakhang is built on a site chosen by Lama Phajo Drukgom Shigpo from Tibet.

Bhutanese parents bring their newborns and young children to Changangkha Lhakhang for new names and blessings from the protector deity Tamdrin who resides in its inner sanctum.

The royal balcony, Changlimithang Stadium (1974). The stadium is built at the exact site where in 1885 a decisive victory paved the way for Ugyen Wangchuck, Bhutan’s first king to take control of the whole country.

The national archery championships were running during my visit. What a treat! Replete with dancing, celebrations, traditional songs and focussed, oh so focussed archery.

Outside the Motithang Takin Preserve I met this group of men under a tree playing soulful Bhutanese songs to the accompaniment of local instruments. 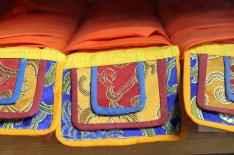 Ancient Dzonghka and Tibetan texts in the National Library. There are thousands of these in silent cabinets on all floors.

This is my all time favourite picture of Thimphu. Four boys busy wrestling, breaking into laughter in the process at Dechen Phodrang, Thimphu’s original 12th Century dzong. It has housed the state monastic school since 1971 and provides an 8-year course to over 450 students. 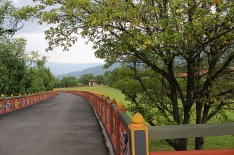 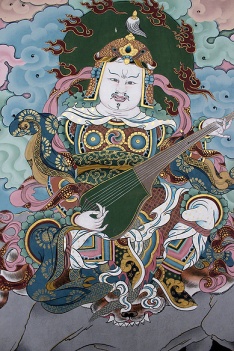 The most imposing landmark in Thimphu—Trashi Chhoe Dzong which translates as “Fortress of the Glorious Religion”. It contains the throne room and offices of the King of Bhutan, Central Secretariat, and the summer quarters of Bhutan’s central monastic body. 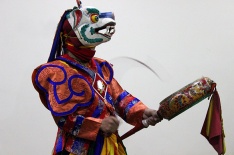 My last evening in Thimphu. A dance performance recreating the masked dances of the annual tsechu festival and folk dances from the inner mountain valleys. Not a great picture, because not everything can be captured by a DSLR. Some need to be experienced live. 🙂