Whoever said Mumbai is all steel and glass often-times grotesque, or miles of slums topped with blue tarpaulin needs to revisit it. Seriously, and, no, this is not some biased Mumbaikar’s rambling.

The city spills over with heritage. It is perhaps not in a blatant form as in other Indian cities which are decorated with grand tombs and forts. Mumbai’s heritage is sepia-toned, like a beautiful memory living on in the modern everyday life we live out on a daily basis, and are unaware of where it stems from. It is a heritage not of brick and mortar but of ideologies and modernism, the latter both political and cultural. It is the sapling that grew up to become “Modern India.”

A few months ago, this became evident to me when I joined a heritage walk through a precinct in South Bombay called Gamdevi or Gaondevi, meaning Village Goddess. The neighbourhood is named after its 200-year-old temple dedicated to Durga, also referred to by its devotees as Lilavati “a graceful woman.”

Spanning less than 500 metres across in width and length each, Gamdevi is where Bollywood talkies originated and Indian feminism shaped itself. Its lanes have triggered the imaginations of painters and authors alike, and its edifices given concrete form to convictions. It is also where Mahatma Gandhi lived and launched the Quit India Movement in 1942. Gamdevi is a pot pourri of the makers of Modern India, and their stories, and by default, our stories, I like to believe.

Theosophy and its legacy

One of the precinct’s most elegant structures is the two-storeyed Blavatsky Lodge (1928), a stone’s throw from French Bridge, designed on European lines and trimmed with red stone filigreed jharokas. It is home to the Theosophical Society Library’s collection of over 7,000 books and a co-Freemasonic temple where initiation ceremonies are performed. Once a vibrant centre for the then radical study of comparative religion, philosophy, science, and occultism, the society’s numbers have dwindled over the years. There are merely 400 in Bombay today and its rooms are rented out for western ballet classes. The society was founded in New York in 1875 by Helena P. Blavatsky and Colonel Henry S. Olcott with its headquarters, soon thereafter, set up in Chennai [Madras].

Of more interest than the charming building, however, are the two women closely associated with it, and their legacy. One was Annie Besant (1847–1933), a British socialist, theosophist, women’s rights activist, writer and orator and avid supporter of Indian self-rule. She came to India as part of her theosophy-related work in 1898, and went on to become president of the Indian National Congress in 1917 and campaigned for Indian independence right up to her death in 1933.

The second, another key theosophist, was Rukmini Devi Arundale (1904–1986), dancer and choreographer. Rukmini, an Indian Brahmin, played a pivotal role in the “upliftment” of the Indian classical dance form, Bharatnatyam. She is credited with rearranging it from its original “sadhir” style, considered as a lowly and vulgar art in the 1920s practised by Devadasis or temple dancers, to its current exalted version.

Bang opposite the Blavatsky Lodge is Raut’s Bungalow (1889), an archetypical 19th Century Maharashtrian mansion unchanged and un-restored, passed down five generations, and a living home now. Winner of the Urban Heritage Award for 1993, if you ever wanted to know how the local elite lived 125 odd years ago, this is it! 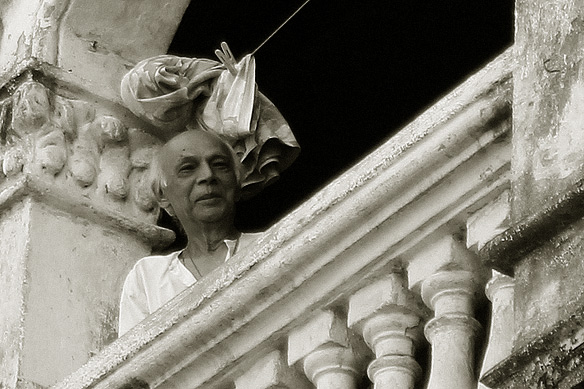 A local looks bemusedly down at me at the Raghavwadi or Haji Kasam Wadi, below the French Bridge. The wadi used to be Alladiya Khan, founder of the Jaipur-Atrauli gharana’s home in the 1930s. During the textile boom, a chawl was added to the property to house textile mill workers 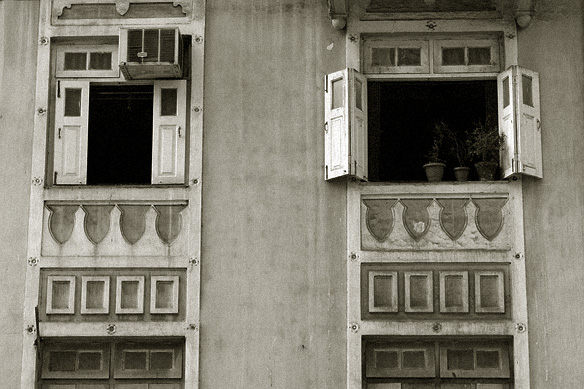 Further down French Bridge is the disputed, vacant, colossal Mathradas Goculdas Bungalow at No. 12 belonging to the textile baron. Here too it is the residents, or rather a particular resident who changed the course of many a things. She was Mathradas’ daughter, Sumati Morarjee (1909–1998), the first woman of Indian shipping.

Sumati assumed full charge of Scindia Steam Navigation Company in 1946 and served multiple tenures as president of the Indian National Steamship Owners’ Association. And if it wasn’t for her there would be no ISKCON today, perhaps. She provided a one-way passage to Swami Prabhupada, Founder Acharya of the International Society for Krishna Consciousness (ISKCON) in 1965 to the US. The rest is history.

Weaving through pastel-coloured, crumbling villas lining narrow lanes, including the picturesque Harishchandra Goregaonkar Marg and the homes of Harishchandra Goregaoker and his descendants, I came out into Kennedy Bridge or “Bridge of Winds.” The more exotic nomenclature traces back to Saadat Hasan Manto (1912–1955) an Indo-Pakistani writer, playwright, and author. Often considered as one of South Asia’s greatest short story writers, his pet themes were the partition and prostitutes. He refers to the bridge as Pawan Pul—Bridge of Winds in his book My Name is Radha.

Allow me at this point to indulge in bits of trivia I discovered during my walk. Did you know Mumbai’s famed marine drive was originally named Kennedy Sea Face, after the same Sir Michael Kavanagh Kennedy (1824-1898) of Kennedy Bridge fame? Kennedy was an engineer and served as Secretary at Bombay Government’s Public Works and Railway Departments. Work on Kennedy Sea Face began in 1915 and took five years to complete.

Anyone who lives in this city knows that housing societies are the crux of its residential structure. I live in one myself. Bombay, no Asia’s first cooperative housing society, the Saraswat Cooperative Housing Society, is [any surprises] in Gamdevi. It was formed on 28 March, 1915.

Continuing with the trivia, just across the railway line is Jinnah Hall, the only public place in India still named after Muhammad Ali Jinnah—lawyer, politician, and founder of Pakistan. It was funded by public subscription after Jinnah opposed a meeting to felicitate Lord Willingdon, Governor of Bombay.

And, lastly, in a little by-lane called Bhendi Gully, just off Harishchandra Goregaonkar Marg, is a miniature replica of Bombay’s iconic Gateway of India. The site was earlier the ancestral mansion of Raobahadur Desai, its superintendent manager, and this 6-feet structure was a part of his courtyard. 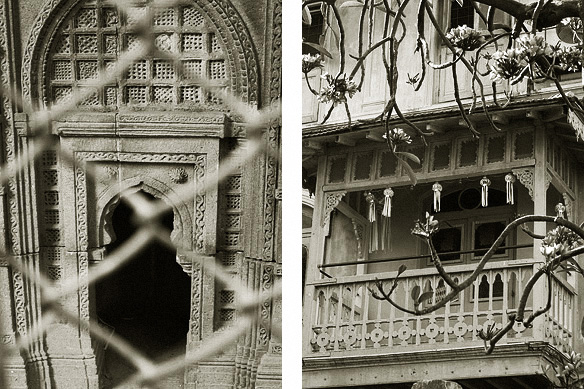 Heritage peeps through the barrier walls of Kennedy Bridge

Back on the bridge, to its right, under the heady sunshine and welcome green leafy trees is where song-and-dance-Bollywood took birth. What appears at first as a bunch of warehouses, on closer inspect reveals one of Bombay’s earliest film studios—Jyoti Studio. This is where Alam Ara, Bollywood’s first full length talkie was shot under the banner of Imperial Films Company. Directed by Ardeshir Irani, and released in 1931 at the Majestic Cinema in Mumbai, the film starred Prithviraj Kapoor, patriarch of Bollywood’s first family in a supporting role. [Imperial Films Company launched Kapoor’s career in 1928.] To keep natural sound out, Alam Ara was shot mostly at night using artificial lighting. The film has since long been lost.

Irani made India’s first English feature film, Noor Jahan (1934), first colour feature film, Kisan Kanya (1937) and produced and directed the first Persian talkie, Dokhtar-e-Lor (1933), all here. Irani is no more, and the studios have morphed into dilapidated motor garages. But the fragrance of a magical make-believe world still lingers on.

Above: Ness Baug, one of the five low-cost baugs or housing colonies built by Bai Jerbai Nowrosjee Wadia (1852-1926), a Parsee philanthropist, in Mumbai; Below: Gamdevi’s elegant bourgeois homes of a bygone era on Dr. Kashibai Navrange Marg—Navrange was India’s first woman doctor to have her own clinic

I talked about feminism in my introduction. In the heart of Gamdevi is a crossroads where two Indian feminists and their stories meet. They are Pandita Ramabai and Dr. Rukhmabai.

Pandita Ramabai (1858–1922) was a social reformer, Sanskrit scholar and a champion for women’s rights. Partially deaf, she founded the Arya Mahila Samaj and Mukti Mission [originally Sharada Sadan], a “Christ-centred home for destitute women and children.” The two were established before and after her conversion to Christianity respectively. Now this is the interesting part—the Episcopal Church [United States] and Episcopal Anglican Church of Brazil honour her with a feast day on 5 April!

The other protagonist was Dr. Rukhmabai, India’s first practising woman doctor. As a child she was part of the court cases which led to the coming into effect of the Age of Consent Act, 1891. The Act raised the age of consent for sexual intercourse for girls from age 10 to 12 years across the British Empire. The story goes as follows: In 1880, Rukhmabai was married off at the age of 11 to a 19-year-old young man who legally summoned her to live with him on the basis of “restitution of conjugal rights.” Our young lady decided to write to Queen Victoria for help. The Queen responded by overruling the court and dissolving the marriage, paving the way for passing of the Act.

Talking about feminism and the Queen brings us to the work of Christian missionaries in Gamdevi and the work of a particular missionary educator, John Wilson. Wilson established Wilson College in Gamdevi, University of Mumbai for the people of Bombay, and was a lobbyist for the establishment of the Archaeological Survey of India in 1861. His wife, Margaret, set up St. Columba Girls High School in Gamdevi in 1832. The ties between Ramabai and Wilson were symbiotic. American sponsors of Wilson College funded Sharada Sadan, and Ramabai built the women’s hostel for his college students.

Pandita Ramabai (1858–1922) founded the Arya Mahila Samaj and Mukti Mission [originally Sharada Sadan], both in Gamdevi. Dr. Kashibai Navrange (1878-1946), a social reformer to the core, floated a Milk Fund in 1916 for pregnant and lactating mothers under the auspices of the Arya Mahila Samaj

Birthplace of the Quit India Movement

From spirituality to Bollywood to literature to feminism to education, and lastly politics—Gamdevi’s role in the creation of independent self-ruled India was no less notable. In the north-west corner of the suburb is Gowalia Tank Maidan, now renamed August Kranti Maidan. It is the site where Mahatma Gandhi made his Quit India speech on 8 August, 1942 in which he announced the British must leave India immediately or else there would be mass agitations. A couple of lanes down is Mani Bhavan, at 19, Laburnum Road, the base for Gandhi’s political activities from 1917 to 1934. The Non-Cooperation, Satyagraha, Swadeshi, Khadi and Khilafat movements were initiated within its premises.

And on this note, I come to the end of my post which has gone … oops … over 1,900 words! That’s the wonderful part about “heritage,” and especially Mumbai’s heritage. It is so incredibly rich, and relevant, wouldn’t you agree? In the coming weeks, I plan to explore Gamdevi’s neighbour, Chowpatty, and am already wondering what insights it will reveal.

If you enjoyed this post, do stop by my blog again as I continue with my explorations and ruminations on Mumbai, my adopted home. 🙂 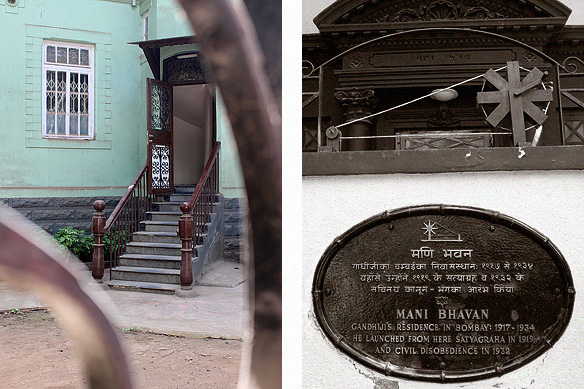 The Gamdevi walk was designed and run by Bharat Gothoskar of Khaki Tours. Funds raised from ticket sales were donated to Angel Xpress Foundation, an NGO working on educating slum kids in Mumbai.

32 thoughts on “the heritage precinct of gamdevi in mumbai: modern india’s birthplace”