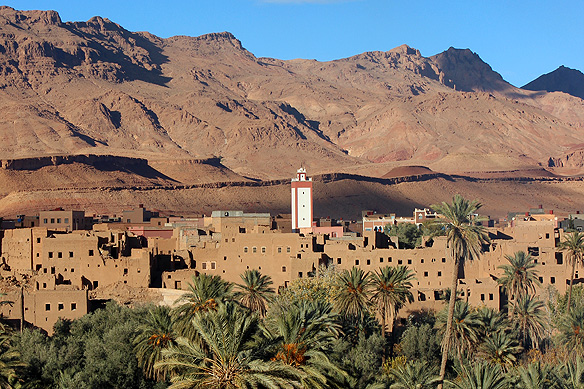 There are two choices for the hiker at Todra Gorge. You can either go up, scaling the burnt orange limestone crumbling cliffs of the High Atlas Mountains, higher with every step, or carry on along the canyon floor into its bowels, deeper ahead. Both have their own perks. A bit like life itself.

Since most people tend to climb up, and I like to do things a tad differently, I decided to walk on straight. It was a long walk. Some four-and-a-half-hours long.

I started at the most visited and dramatic section, a 10-meter-wide chasm shared by both river and road, and penned in with towering perpendicular cliffs 160 metres tall. Stretched over a length of 600 metres, the tourist crowds usually do their U-turn here and go back.

But should one venture on, the unfolding of the cliffs into craggy piles of rock up to 400 metres high that line a desolate sun-baked concrete road is surreal and unreal rolled into one. The only sound I could here as I trudged on alone under the ultramarine blue sky was the chirping of birds. They seemed almost glad for my company. 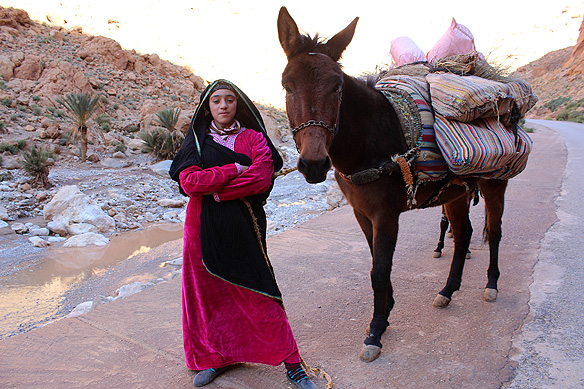 After two hours I was convinced the route was devoid of all traces of humanity. It was at this point a young Amazigh nomad girl sauntered past with her donkey and offered to pose for me. She threw her shoulders back, rearranged her scarf, her stance defiant and free. A few exchanged laughs and she was on her way, and me on mine. An hour later I thought I saw a laundry line up in the mountains. Zooming in with my camera, I could make out an Amazigh man seated by his cave home, waving at me.

These were the only two I met on my four-and-a-half-hour hike one way.

It gets dark fast in the gorge, and it was no different that day. A part of me was addicted by now to the desolation and wonder of what, if anything at all, lay ahead. I also knew if I did not turn around, I would be swamped by the pitch-black darkness of the untamed High Atlas Mountains in no time.

As if in serendipity, a run-down Datsun with smoke bellowing out of it and packed with three generations of an Amazigh family halted next to me in response to my flagging it down. Neither of us understood each other, but when has that ever stopped friendships from blossoming. I was regaled with pictures of their whole family on their one cell phone, entertained with bytes of Bollywood songs they sang in full gusto, and asked if I would like to marry one of the brothers. To the last I politely said No, explaining I had a flight to catch back. They accepted my refusal with a twinkling laugh and a shrug.

Back at the entrance of the Todra Gorge, it was time to say our good byes. They drove on, and I took a local bus to Tinghir. Later, seated with a cafe nous nous in the main square, as the sun set and dusk enveloped me, I wondered if I had dreamed the whole escapade or did it really happen. The pictures in my camera assured me it was no figment of my imagination. Thank god for large mercies. 😊

Note: Todra Gorge, also known as the Todgha Gorge, is a 40-kilometre long canyon carved out by the Todra River in the High Atlas Mountains in Morocco. Popular with rock climbers, the mineral-rich dramatic canyon is located near the oasis town of Tinghir.

[Note: Click on any of the below images to navigate through the set and read the captions.]

The most spectacular part of the canyon is this 600-metre stretch.

Just 10 metres wide with perpendicular rock walls around 160 metres high on both sides. Don’t venture here if you are prone to claustrophobia!

As I walked on, the road widened, became less smooth, and more remote.

A picture is worth a thousand words. 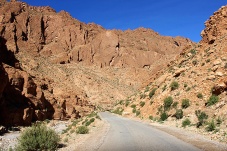 The 40-kilometre long Gorge is carved out of the mineral-rich mountains of the High Atlas. 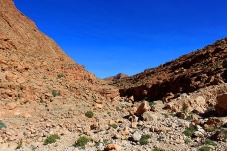 A cocktail of Earth and Mars. 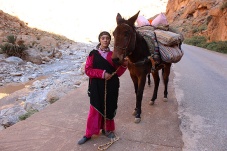 Just when I was convinced I was the only person in this part of the Gorge, I met my first friend. 🙂 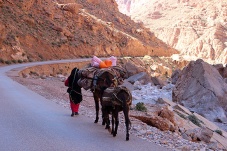 Time to say good bye and move on again. 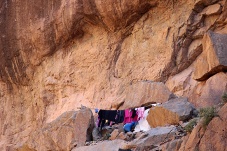 Look what I found. A laundry line up in the mountains next to an Amazigh nomad family’s cave home. 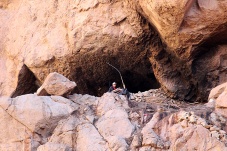 … And this is their cave home.

In the rainy season this river bed brims with a gushing river, making parts impassable.

Room in a view. 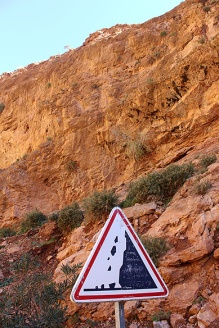 Oops, a warning to be careful.

Self-portrait. How much further is the end? More importantly, do I even want it to end. ❤

[Note: This blog post is part of a series from my travels to Morocco for 3 weeks in November-December, 2018. To read more posts in my Morocco series, click here.]

17 thoughts on “travel diaries: hiking through the todra gorge”