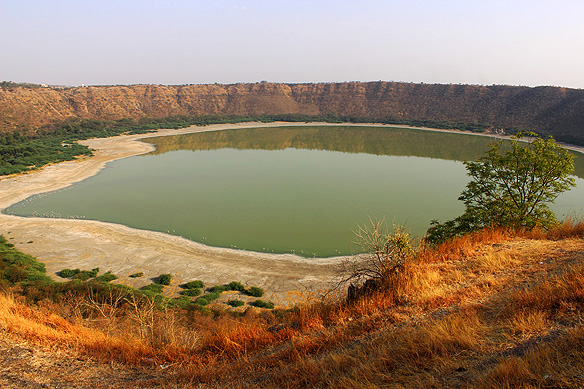 “That’s where the meteorite came hurtling from,” my guide Mahesh points towards the Gomukh Temple perched on a slight dent in the rim.

“When was this?” I ask, breathless, as I slip over rubble and step gingerly down boulders, trying hard to look where he is pointing to and not go tumbling down in the process.

An hour later, we are standing inside the crater, 137 metres below ground level. Basalt cliffs rise around us at an angle of 75 degrees in an oval rim. The 1.8-kilometre-wide cavity is filled with a lake, both saline and alkaline at the same time, with a unique ecosystem that has been the subject of much scientific study. I need to walk carefully by the edges of the green water—every now and then I catch my feet getting sucked in by the salt and soda-packed earth.

It is hot. Very hot, and still. The rim acts as a barrier to any form of a breeze from entering the enclosed area. Add to it the fact that the ground here is closer to the earth’s volcanic centre.

According to science, Lonar Crater, also known as Lonar Lake in the Indian state of Maharashtra, is the only known hyper-velocity impact crater in basaltic rock created by a meteor on our earth. As per Hindu legend, Lonar is a sacred site with mentions in the ancient scriptures. An evil giant by the name of Lonasur once lived inside this crater. He was destroyed by the god, Vishnu, and the 1,000-year-old Daitya Sudan Temple in Lonar Town celebrates this victory. Temples dedicated to various other deities, meanwhile, pepper the rim, slopes, and basin.

Going up turns out to be much tougher than coming down. The only respite is the charming ruins of these ancient temples en-route, snuggled deep in the thick forest cover. And lazy conversations with the local caretakers, filled with narratives where the lines dividing scientific fact and mythical legend are deliciously blurred. 🙂