[I traveled to Uzbekistan for 11 days in September 2015. My below post first appeared as a travelogue in Hindustan Times, one of the largest newspapers in India, in both its print and online editions. The online edition can be read here. The post remains a personal favourite, and I wanted to share it with you. 🙂 ]

‘Ishani!’ I can feel scores of eyes bore into me. There is the blatant stare, the questioning glance, the shy surreptitious gaze. They are all invariably accompanied with the word ‘Ishani’ whispered in hushed tones. The wide-cheek-boned faces soon, thereafter, break into warm welcoming grins and I hear the magical word again, ‘Ishani’. Aah, I get it. It’s a greeting! Ishani to you too, my dear.

I have just arrived in Nukus, a remote, Russian-ised town in north-west Uzbekistan where I am to start my 11-day journey across a country I have dreamt about, bucket listed and hankered to visit since I read the poem The Golden Journey to Samarkand by James Elroy Flecker:

“We are the Pilgrims, master: we shall go
Always a little further …
White on a throne or guarded in a cave
There lives a prophet who can understand
Why men are born.”

I am a pilgrim here too, looking for answers. Nukus is not part of the usual Uzbekistan travel itinerary. It lies snuggled on the country’s edge and is an eight-hour drive away from Khiva through the Qyzylqum desert. So why go to Nukus? If you are an art lover, Nukus houses the world’s second largest collection of Soviet avant-garde art at its Savitsky gallery. If you are passionate about the environment, the dying Aral Sea nearby is a reality check of how economics depletes our natural resources.

Uzbekistan broke away from the Soviet Union in 1991. In many respects, the country is still in transition. As it explores foreign ties, walled in by a predominantly Russian and Uzbek speaking populace, an Indian serial dubbed in the local language has woven its way into the lives of the people here. The lead character of this serial is Ishani. This insight is divulged in a tiny café in the local bazaar over a three-in-one cup of tea (translated to tea with milk and sugar). A mother-daughter pair at the adjoining table want to get pictures taken with me, their conversation interspersed with the expected ‘Ishani’.

Not able to handle my own imagination and its half-baked conclusions anymore, I ask, careful not to offend such overt affection, “who is she/it/that?” I am first met with sheer disbelief at my ignorance. This is followed with dramatic gestures on eternal love and a new word ‘Ranveer’.

Seeing my vacant expression, they zip out their phones, google and show me images of ‘Ishani’ captioned in Uzbek. Since I am not a TV enthusiast nor do I understand Russian or Uzbek, it all remains confusing. A serial called Ishani? Well for now this is to suffice for it is time for me to leave for Khiva. 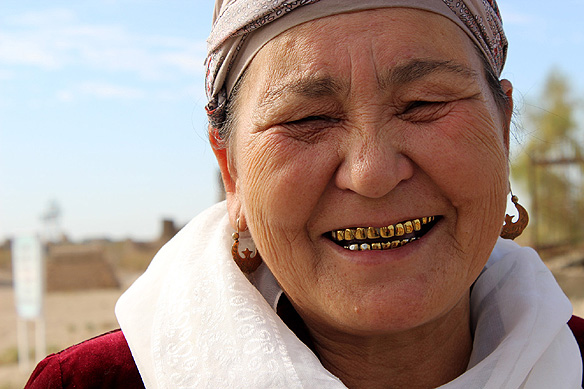 Stopping en route to scramble over the walls of Chil’pyk, a Zoroastrian Tower of Silence and crumbling fortifications of a string of Khorezm forts dating back to the third century, I reach the 2,000-year-old town of Khiva at dusk. As I open my bedroom window to one of the most beautiful sights so far—the towering Islam Khodja Minaret—I muse if Ishani is incidental only to Nukus. Khiva assures me otherwise. Come evening, I see all the Uzbeks running home. “What happened?” “Ishani is going to start soon!” The town is at this point left to the tourists, who have to fend for themselves!

Khiva’s old town is steeped in legends and packed with over 50 monuments and 250 old houses inside its 17th Century walls. Within its carefully manicured folds, 1,000 years of time coexist in uncanny harmony, whether it is the columns of the Djuma mosque, college students in figure-hugging jeans coming in for a short prayer at one of the shrines or the madrassas converted to museums.

Forest of over 200 ornate wooden columns at the Djuma mosque, Khiva.

Whilst Khiva is small and intimate, Bukhara is larger and more structured with distinct burial, administrative, religious and trading areas. Bukhara is also where, because of a populace better at English, I learn that Ishani is the lead character of Meri Aashiqui Tum Se Hi, a TV serial produced by Balaji Telefilms. It premiered on 24 June, 2014 on Colors TV in India, and has since been dubbed and is broadcast in Uzbekistan every day at 7 pm.

Wandering through Bukhara’s lanes I come across young women with bindis on their faces dressed in punjabi suits replete with dupattas. “My Muslim name is Sara. My Indian name is Sarita.” A peal of joyful blushing laughter follows this introduction.

One may well ask why a foreign nation is so enamoured by this tele-serial. I am told it is ‘Indian love’ epitomizing loyalty and familial love. Importantly, it is the only Indian serial broadcast in Uzbekistan.

As I explore Khiva and, then, Bukhara I meet countless people and have an equal number of pictures taken with them—all I can say is I must have graced many a facebook wall during my stay, all because in some remote way I epitomized Ishani.

Less touristy, merrier with Uzbeks dancing and singing in the central squares, Bukhara was once upon a time called the ‘Muslim Dome’ and has historically been an Islamic religious and learning centre. 140 turquoise tiled minarets, madrassas and mausoleums adorn it; Poi Kalyan Complex, Ulug Begh’s Madrasah and the to-date sacred site of 14th century Sufi saint Bakhouddin Nakshabandi are testimonies of its spiritual legacy.

Finally, like the travellers in medieval times who traversed the desert to reach the glory of Samarkand, I reach it too, via Shakhrisabz, Temur’s home town.

Samarkand is best described in just one word—Opulence. Christened Afrasiab, it was the ancient capital of Sogdiana and later became the capital of Temur and his empire. One glance at the Registan edged with its three magnificent madrassas, royal necropolis Shah-i-Zinda and Gur Emir, ‘grave of the ruler’ where Temur and his descendants are buried are enough to take one’s breath away.

The ‘Ishani’ effect at Registan, Samarkand.

The Registan edged with its three magnificent madrasahs, Samarkand.

So did I find my answers in Samarkand, you may well ask me. Yes, I did. On a spiritual note, I learnt that for the pilgrim, it is all about the journey, and if it were not for Nukus, the Khorezm forts, Khiva, Bukhara, and Shakhrisabz there would be no Samarkand. The journey to Samarkand is the journey to the opulence within ourselves. On a more realistic note, all you need to connect disparate nations is a tele-serial.

Eleven days in a Central Asian country and everyone I met greeted me with love, respect and warmth. I was the only Indian woman traveller; in fact I did not come across a single other Indian. Yet, I was welcomed with open arms. What no foreign policy or trade relation between India and Uzbekistan could achieve, an Indian tele-serial has been able to do. It has brought India to the hearts, minds and homes of an entire nation. The gleam which Ishani triggers is unparalleled.

Thank you, Uzbekistan, and I guess it would be only fair to say, thank you, Ishani, for making my journey to Samarkand in every sense—a homecoming.

37 thoughts on “the golden journey to samarkand”