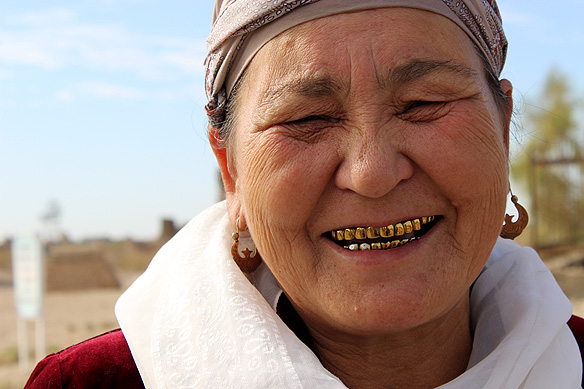 A journey to Samarkand is about medieval mythical cities and ancient forts going as far back as 500 years before Christ. First Zoroastrian, followed by Islamic, the sites still stand in all their glory today—many restored, others in ruins. But in spite of this, the journey is not just about geographies, edifices or time. It is to the grandeur within us. But that, I hope, will become clearer as my blog post series on Uzbekistan unfolds. 🙂

I started in Nukus. You may well ask why Nukus for it is not the usual starting point. Well, my answer is: It is the western most city, has the finest collection of historical and cultural artefacts at its State Art Museum Savitsky Collection thereby offering a splendid introduction to the country, and is the most low key in the circuit. Everything only gets more fantastical from here onwards.

Nukus also lies on the outskirts of Khorezm [or Khwarezm or Chorasmia (Persian)]—an oasis, the site of an ancient civilization by the same name, and now a province.

As an oasis, Khorezm is a region in the Amu Darya river delta in western Central Asia. Khorezm, the civilization, formed part of the Zoroastrian Achaemenid Persian empire (6th to 4th Century BC) and, thereafter, that of the Sasanian Empire (224–651 AD), also called the “Empire of Empires” which flourished here. In the 7th Century, Khorezm was conquered by the Arabs who brought in Islam and shifted their seat of power further eastwards, towards Khiva. In its avatar as a province or viloyat, Khorezm is one of 12 in the country.

Oral history and some scholars claim Zoroastrianism originated in Khorezm. This legacy lives on in the gigantic tower of silence in Chilpik, the fire temples in the ruins of approximately 50 surviving castles wrapped in the sands of the Kyzyl Kum Desert, Zoroastrian rituals in Islamic tombs and mosques, and the celebration of Navroz, the Zoroastrian New Year, to date. Khorezm is an amalgamation typical to Uzbekistan.

My first stop is Mizdahkan, a huge necropolis spread over three low-lying hills just outside of Nukus with a sea of graves going back 2,000 years, and gold toothed buxom ladies in velvet gowns and head scarves lighting candles in Muslim shrines.

Once upon a time, Mizdahkan was the second largest city in medieval Khorezm. It was continuously inhabited from 4th Century BC to 1388, when it was sacked by Temur. Thereafter, the city reduced itself to a necropolis and has stayed so since—the Uzbeks still bury their dead here. On a more fabled note, Muslims claim Mizdahkan is the site of Adam, the very first man’s, tomb whilst Zoroastrians believe it is the burial place of Gayomarda, the first mortal man according to their mythology.

Much of the burial grounds comprise pits covered with ladders on which the dead were brought in, dotted with sacred tombs and shrines from different epochs of time. There is Prophet Shamun Nabi’s 25-metre long mausoleum to accommodate his giant status, both literally and figuratively, the Djumarat Khassab Mound with special prowess of granting fertility to the childless, the “Watch of World” or “Watch of the Apocalypse” believed to be Caliph Yerejeb or Adam or Gayomarda’s burial place, and the Mazlum Sulu Khan mausoleum dedicated to the star-crossed lovers Mazlum Khan and her beloved.

Childless women praying for a child at the Djumarat Khassab Mound; Prayer rituals include their rolling down the hill. 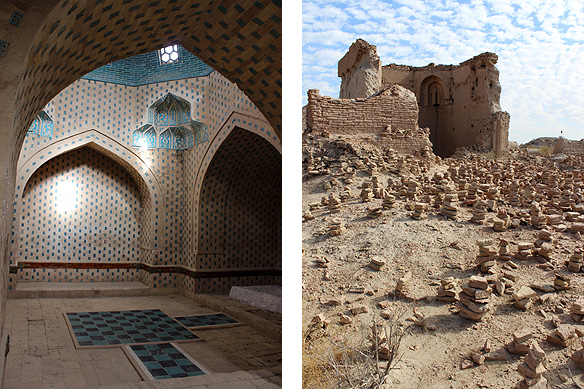 Left: The tomb of the star-crossed lovers Mazlum Khan and her beloved; Right: “Watch of World”—legend goes that when all the bricks fall down the world will end.

If Mizdahkan charms with its juxtaposition of multiple time zones, legends and architectural styles, all in death’s name, the Chilpik dakhma awes with its singularity and grandeur.

Built of compact clay sometime around 2,000 years ago as well, local lore claims it is where Zarathushtra started writing Avesta, Zoroastrianism’s sacred texts. Roughly 65 to 79 metres in diameter with 15 metre high walls and standing on a 35 metre conical hill, the dakhma was in active use untill the Arab invasion. A 20 metre long stairway cut into the rock leads to the opening on the western side.

In ancient times the dakhma stood by the banks of the Amu Darya, along which the dead body would have been brought here for its one year exposure to the vultures and elements. Once bleached and picked to its bare bones, the family would then collect the remains, placing them in an ossuary for burial closer to their settlement.

I sat on the towering walls surrounding the vast expanse within and outside the dakhma, the sun beating down on me, and could almost imagine the funerary processions from another world and hear the silence of death. Dakhmas have that effect. 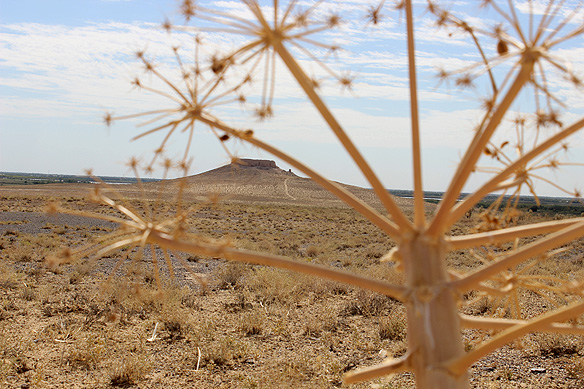 And then it was on to two of the 50 Khorezm civilization fortified settlements or kalas [also known as Ellik (fifty) Kala], now part of the UNESCO Golden Ring of Ancient Khorezm project—Toprak Kala and the three Ayaz Kalas.

Toprak Kala, the ‘clay fort’, an administrative and religious centre and where the nobility lived, was built between the 1st Century BC and 2nd Century AD. It consisted of a city-citadel complex, palace-temple complex and large open walled enclosure, and was home to about 2,500 people. Abandoned in the 6th Century, the site measures 500 X 350 metres and is surrounded by a 10 metre high wall, 63 towers and a moat. Not much remains. What little we know is because of written records on wood, leather and clay tablets discovered at the site. 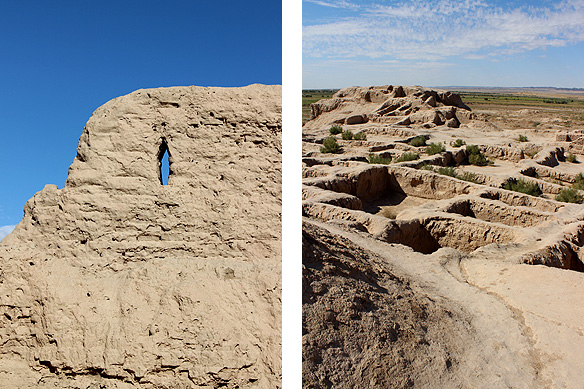 The three Ayaz Kalas meanwhile stand guard over what was once a fertile plain, and served as a refuge for inhabitants from the surrounds. Of these Ayaz Kala 1, the upper level fortress on a 100 metre high hill, with commanding views over the countryside is the oldest (4th Century BC), and the one I spent the afternoon exploring. It is smaller than Toprak (180 X 150 metres), has a rather unique double wall with an arched corridor running in between, and overlooks Ayaz Kala 2 built on a lower hill 800 years later.

I love the desolation of ruins and the desert. It is almost masochist, yet spiritual. Khorezm is not just about an ancient civilization and its remnants two millenia on. It is a peep into life’s grandeur and the insignificance of human existence staring one straight in the eye.

There was not another soul in my journey through the desert sands apart from a few Japanese tourists in Ayaz Kala. A handful of historical facts, myths galore, me, and miles of space and time. I was also now nearing Islamic Khiva, but that is for my next blog post. ❤ 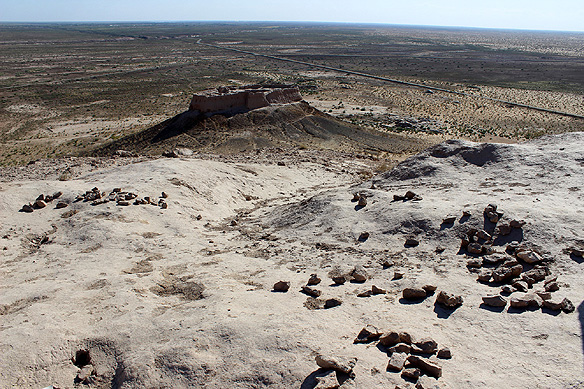 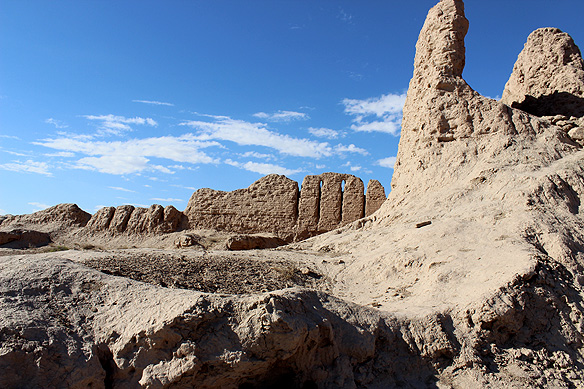 Note: Khorezm was part of an independent road trip I undertook from Nukus to Tashkent in Uzbekistan.

14 thoughts on “zoroastrian khorezm: the ancient viloyat of uzbekistan”