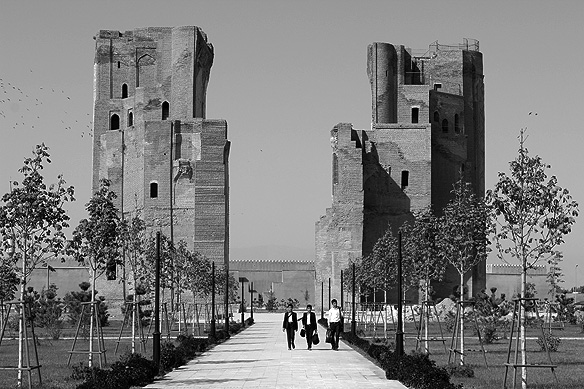 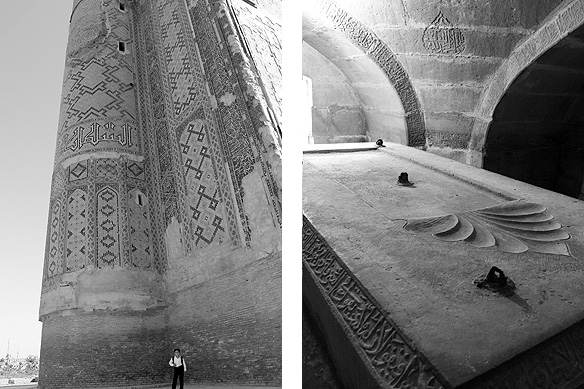 The grandeur of the Ak-Saray Palace and the simplicity of his own intended tomb—both in Shakhrisabz—perhaps best describe Amir Temur the person, better known as Tamerlane [Temur, the lame]. Complex, multi-faceted, termed history’s most callous butcher, conqueror of southern, western and central Asia, he was the founder of the Timurid dynasty, and the great-great-great-grandfather of Babur, founder of the Mughal Empire in India. He lived from 1336 – 1405 AD.

Ahmad ibn Arabshah, Temur’s Arab biographer, had to say this of him when the latter was 70 years old:

“Steadfast in mind and robust in body, brave and fearless, firm as rock. He did not care for jesting or lying; wit and trifling pleased him not; truth, even were it painful, delighted him … He loved bold and valiant soldiers, by whose aid he opened the locks of terror, tore men to pieces like lions, and overturned mountains. He was faultless in strategy, constant in fortune, firm of purpose and truthful in business.”

Shakhrisabz, also known as ‘Kesh’, was Temur’s home-town, birth-place and intended burial site. He was eventually, however, buried in Samarkand, the capital of the Timurid dynasty.

Ak-Saray, Temur’s Summer or White Palace was once 70 meters high, covered with blue, white, and gold mosaic. It was Temur’s most ambitious building project. The words “If you challenge our power—look at our buildings!” are emblazoned above the entrance. All that remains today are the pillars and part of the main portal’s arch. But it is enough to make one gasp in awe of what must have once stood here.

In contrast, a door leading to an underground chamber close by, filled with a single stone casket, was where he planned on staying once dead. Bare, simple, small, unadorned save from a few inscriptions. Empty, it is fully intact to-date.

Note: Shakhrisabz, some 80 kilometres from Samarkand, was part of my road trip from Nukus to Tashkent in Uzbekistan.

18 thoughts on “shakhrisabz, warlord tamerlane aka temur the lame’s hometown”