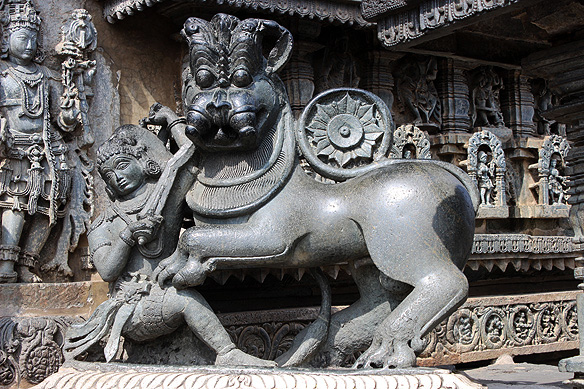 Cries of “Hoy, Sala” [Strike, Sala] rang out as Sala, a Jain youth, single-handed fought a tiger to save his guru. It was around 950 AD, in the Deccan plains of South India. He immortalised this cry in the name of the dynasty he founded—Hoysala—which ruled the region till 1355 AD. The incident became its emblem.

Sandwiched between the Chalukya dynasty in Badami and the ruling Cholas in Thanjavur, Sala and his descendants created a flourishing agrarian empire populated by a sophisticated society, and where the arts thrived. Their capital was Belur, then called Velapuri. Vishnuvardhana [1108 – 1152 AD], the 5th Hoysala king, later moved his capital to Halebidu, 17 kilometres away, where it stayed till the end.

Though Hoysala palaces and homes are long gone, their stone temples still stand. Even time and wars have not been able to diminish their exquisite beauty, a fascinating peek into a by-gone society’s values and aesthetics.

So, if you ever thought all temples in India look the same, think again. Every dynasty and empire in the Indian sub-continent created its own inimitable style through history. Hoysala temples are typified by being star-shaped, compact structures on a raised platform, ornate with a focus on dance and music, and carved out of soapstone.

It is this stone which gives these temples its magic. Soapstone is easy to carve and hardens when exposed to the elements. Hoysala artisans were able to transpose their skills in ivory and sandalwood carving onto stone to create a world rich in super-intricate details. Like a loose bangle on the wrist of a monolith statue. Or bared teeth in a snarling chimp. Or the strings of a sitar. These panels and other architectural elements were then assembled together using an innovative interlocking system.

Over 1,500 temples were built by the Hoysalas during their reign. Only a hundred or so still survive, of which those at Belur, Halebidu and Somanathapur are the cream of the crop. The sacred ensembles of the Hoysalas at Belur and Halebidu have been tentatively listed as UNESCO World Heritage Sites. Fingers crossed, one day, soon, they make it to the permanent list!

When I reached the twin cities of Belur-Halebidu last month, I was no stranger to it, having explored them in my college days. The memories were still etched on my mind, and heart. My revisit was an attempt to go deeper. I’m sure you know the feeling. Some places just call out a second time wherein we learn something new about it. A new detail. Another perspective.

Such was the case with Hoysala temple architecture and me as well. Here’s to deeper travelling. ❤

Belur temple, where stone-filigreed Bharatanatyam dancers hold up the roof

If stones were to narrate lucid poetry about the sensuous beauty of a woman, their point of reference would be the Chennakesava [Beautiful Keshava] Temple in Belur. Thirty-eight voluptuous maidens, known as madanikas, in various Bharatanatyam dance and ritual poses hold up the ceiling outside in effortless grace, some signed by the sculptors themselves. Four madanikas support the ceiling inside, above the circular dais where 900 years ago Queen Shantala Devi once danced for the gods.

Each madanika is a masterpiece carved out of a single slab of soapstone. The most famous is, without a doubt, ‘Darpan Sundari’ [Beauty and Mirror] which recounts a woman’s perpetual dissatisfaction with her looks. Another sculpture to look out for is the ‘Monkey Pulling Saree’ for the sheer expression on the mischievous monkey’s face. Inside the large navranga mandapa, the Narasimha Pillar till recently used to rotate on its own axis and another column has Mohini, the female version of Vishnu and portrayal of ideal feminine beauty, carved onto it.

Surrounded by these other-worldly details, a 6-feet high deity of Keshava, a form of Vishnu, gazes calmly from the inner sanctum of the ekutachala [one-shrined] temple at the string of travellers and pilgrims who step into the dark hall in wonder. King Vishnuvardhana called the effigy Vijayanarayana, one of the 24 incarnations of Vishnu, when he built the temple and consecrated it in 1117 AD. From that day to now, prayers and rituals have been performed here, morning and evening, uninterrupted.

It took three generations and 103 years to complete Hoysala Empire’s most exquisite place of worship guarded by the Hoysala emblem of Sala and the tiger. Some claim it was King Vishnuvardhana’s victory over the Cholas which inspired him to build it. Others believe it was his official adoption of Vaishnavism from Jainism. Whatever be the case, one’s life is richer for having witnessed the interweave of stone and beauty.

Travel tips: 1) Get a guide. 2) Explore the structures in the compound as well. Noteworthy are the gravity pillar and Andal or Ammanavara Temple. 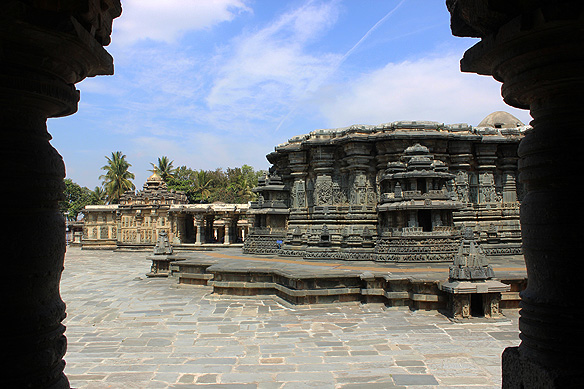 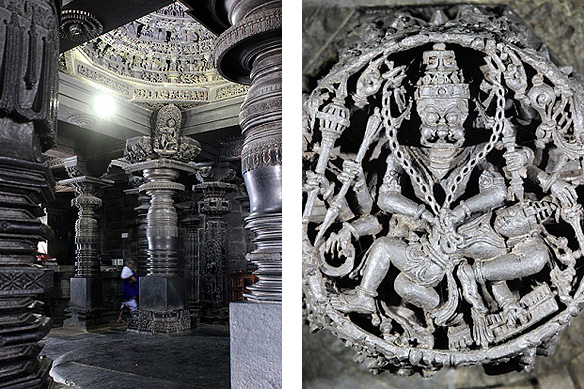 Left: Hoysala temple architecture’s signature lathe-carved pillars in the navranga mandapa; Right: This is a detail and epicentre of the wondrous ceiling over the dais. It depicts Narasimha, Vishnu’s half-man half-lion avatar tearing out the intestines of Hiranya Kasipa. 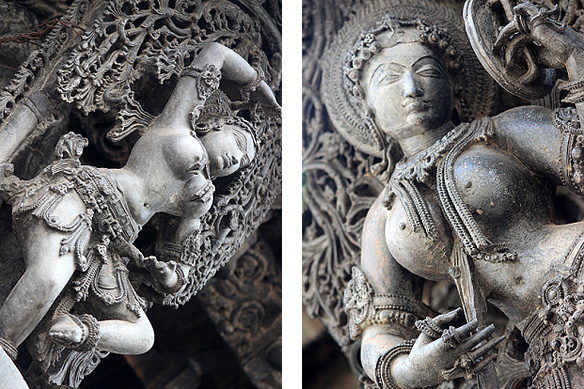 Left: Madanikas of Belur; Right: Darpan Sundari, meaning Beauty and Mirror, is one of Keshava Temple’s most famous sculptures.

A seated stone elephant looks out into the colonnaded courtyard.

Garuda, Vishnu’s vehicle with the towering gopuram [1397 AD] behind him. 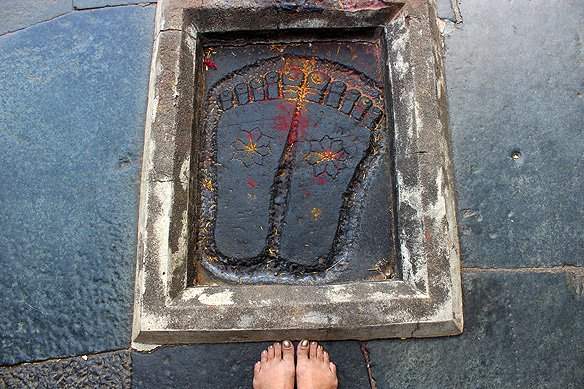 Self-portrait: I was at Belur.

Halebidu temple, a gigantic stone gathering of gods and goddesses

Spelt Halebid, Halebidu or Halebeedu, the ancient capital of the Hoysala Empire is home to the magnificent Hoysaleswara Temple. It was completed in 1121 AD during the reign of King Vishnuvardhana Hoysaleswara who moved his capital here from Belur, and is the largest Shiva temple built by the Hoysalas. Interestingly, the structure was funded by the city’s wealthy citizens and merchants, rather than royalty.

A dikutachala [two-shrined] temple, each with its own vimana, it comprises of two shrines with a large Shiva linga in each. One was for the King Hoysaleswara, and the other for his queen, Shantaleswara aka Shantala Devi. Both garbagrihas lead out to their respective smaller shrines containing massive placid nandis, the mythical ‘vehicle’ of Shiva. The vimanas have fallen to the vagaries of time, hence the flat roof.

One can only imagine Hoysaleswara Temple’s grandeur nine hundred years ago when it stood on the edge of a long-gone man-made lake. The city was then called Dorasamudra, gateway to the sea. Halebidu is a later name and means the ‘the ruined city;’ its splendour hinted at by its still standing relics.

Travel tips: 1) The temple at Halebidu is best photographed in the afternoon. 2) Down the road are a few Jain Hoysala basadis and the incomplete Hoysala Kedareswara Temple [1219 AD], still beautiful in its unfinished state. 3) There is a small but interesting archaeological museum at the site worth a dekko [entry fee].

A worshipper in the Hoysaleswara inner sanctum.

Left: Detail, dwarapal guarding the entrance. Every effigy in a Hoysala temple, along with its props, is an exquisitely carved monolith; Right: Colossal nandis face both the garbagrihas. Nandi, the sacred bull, is believed to be Shiva’s ‘vehicle.’

Left: Isn’t he beautiful? Krishna with his flute deep inside one of the recesses created by the star-pronged structural wall; Right: Krishna again, this time with women musicians. Though a Shaivite temple, the temple walls contain images of the entire Hindu pantheon. 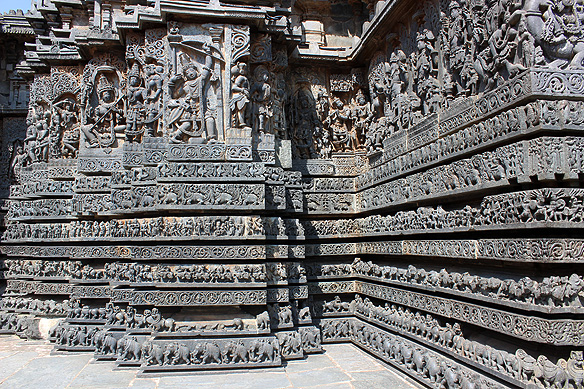 Someone asked why were Hoysala temples star-shaped. The answer was because both the sun and moon wax and wane; the stars are always constant.

Somanathapur, an ode to the plantain fruit offered to Vishnu 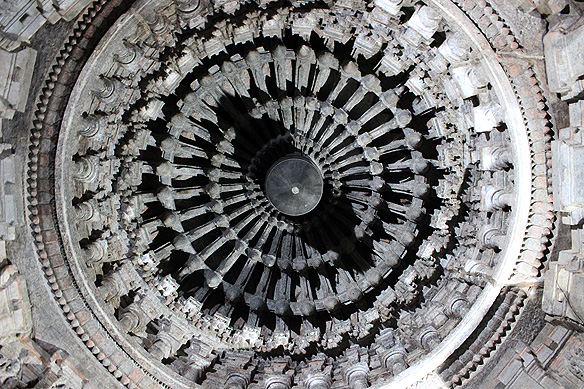 Hoysala temple architecture found its zenith in the Keshava [Vishnu] Temple in Somanathapur, on the banks of the river Cauvery. By the time the Hoysalas built it, they had been around for 250-odd years and had perfected their signature style. The star-shaped platform, intricate and exuberant sculptures, and glistening lathe-carved pillars are all at their finest here. Need I add, it is my favourite as well.

Inside the dim interior, sixteen ceiling panels are carved with various stages of a blooming plantain flower, a key part of offerings made to Vishnu to this day. Unlike the temples at Belur and Halebidu, the temple has its vimanas over the sanctums—still intact. It is also the least damaged of the three temples by the Islamic forces from Delhi.

Another feature which sets it apart is that it’s a perfect model of the trikutachala [three-shrined] order. There are three garbagrihas within, all connected by a common pillared mandapa hall. The western sanctum houses Keshava; the original is missing and the one inside is a substitute from another temple. To the south is an effigy of Venugopala or Krishna, and to the north is Janardana; all are different forms of Vishnu.

The town Somanathapur itself dates back to the Cholas, and after the Hoysalas was ruled by the Vijaynagara kings and later the Wodeyar kings of Mysore. It is named after Somanatha Dandanayaka, an army general of Hoysala King Narasimha III. An inscription testifies he established an agrahara, meaning settlement of priests, in Somanathapur and consecrated the Keshava Temple in 1268 AD.

Travel tips: 1) If you are into photography, visit the temple in the morning as it faces east. 2) Ticket: Rs. 25 for Indians; Rs. 300 for foreigners.

Dwarpala standing guard at the entrance of the main temple. Elaborate friezes depict stories from the Ramayana, Mahabharata, and Bhagavata Purana.

About 90 reliefs of gods and goddesses wrap around the sanctum’s outer walls. Lakshmi, Krishna, Brahma, Shiva, Shakti, Indra … the Hindu pantheon in all its glory are carved here.

Left: That point in eternity. A pillared corridor lined with shrines encircles the Keshava Temple courtyard; Right: Vishnu seated on a coiled snake. 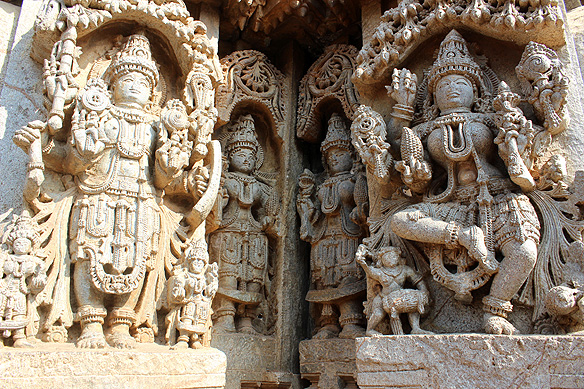 Vishnu once again, this time in the company of his consort, Lakshmi.

Left: Venugopala [another name for Krishna] playing his flute in the south shrine. The sculpture includes a plethora of beings, both celestial and earthly, absorbed in his music; Right: I just loved these tiny little musicians peeping out of the lotus ceiling. 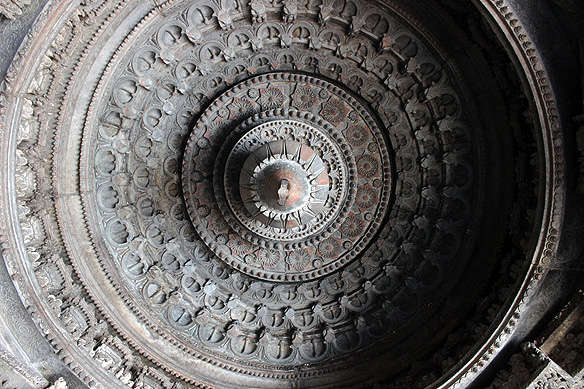 Lotus ceiling panel, in all its grandeur, by the entrance. The Lilliput musicians in the previous image line the dome’s inner edge.

And with this I reach the end of my post on the three jewels of Hoysala temple architecture. I hope you enjoyed reading it as much as I enjoyed writing it. 🙂

[Note: This blog post is part of a series from my solo and independent travel to Mysore and its surrounds over 5 days in end-January 2020. To read more posts on Karnataka, click here.]

7 thoughts on “poetry, myths and stone: the millennia-old sculpted hoysala temples of karnataka”