Of all the sagas on colonial rule in India, one stands out apart—for its miniscule scale and perseverance to hold on to its holdings. I am talking about the Danish.

My post is about the last one in this list. Tranquebar, or Trankebar as the Danes called it, on Tamil Nadu’s Coromandel Coast. A patch of “5 miles by 3 in extent” which they ruled from 1620 – 1845 and was their capital city in this part of the world.

I was on a week-long exploration of the temple towns of Tamil Nadu in early-March this year. Tranquebar was a breath of fresh sea-air in the mix. One I was determined to include.

All that remains of this once bustling trading post is a series of sand-washed forlorn monuments hugging the coast, and Danish memories. Five memories to be precise. Happy time-travel to Danish India. 😊

From 1498 to 1739, the Portuguese, English, French, and Dutch were all finding their way to the Indian sub-continent, lured by its riches and strategic location.

However, when the Danish Empire’s King Christian IV added Tharangambadi, as it was locally called, to his kitty, it was anything except a deliberate move. Far from it, in fact. The Danes had their eyes on Ceylon.

Inspired by the successes of the Dutch and British East India Companies, he decided to also join the bandwagon and sent Admiral Ove Gjedde to Ceylon to sign a trade agreement. Gjedde reached Ceylon after two years of sailing and half his crew dead, in May 1620, only to find the Ceylonese had dumped the idea.

Meanwhile Robert Crappe, Gjedde’s trade director who had left a month earlier, was attacked by marauding Portuguese ships on his way. Crappe managed to escape to India’s shore, was captured by the locals and presented to the Nayaka King Raghunatha Nayak in Thanjavur who was only too happy to go to trade with him. So instead of Ceylon, the Danish ended up with Tharangambadi, which they renamed Trankebar and the British renamed Tranquebar, on 20 November, 1620. As they say, what is meant to be, will be.

Though unplanned, King Christian IV and his successors, once settled in, were determined to expand Danish India. They added surrounding villages to their Tranquebar holdings and embellished Tranquebar itself with a fort and European-styled buildings for their own people, to create a slice of royal Denmark in sultry India.

Land Gate, built in 1792, was once part of a fortified wall which enclosed the city. 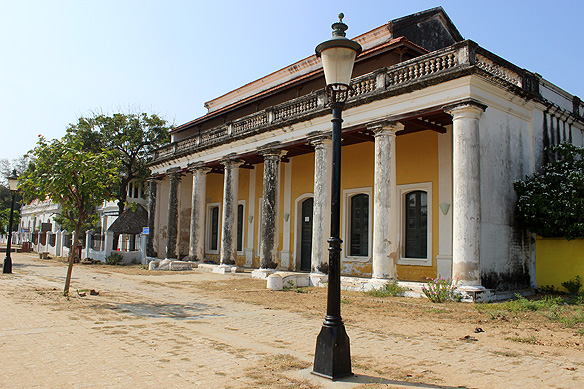 Governor’s Bungalow [1784], now much restored and locked away. In its heyday, it would have been the centre of elite Danish social life with fancy balls and dainty parties.

2. A Danish trading post “five miles by three in extent”

“Five miles by three in extent” was the size of the fishing village Nayaka King Raghunatha Nayak gave to the Danish East India Company to set up a trading post at. In return they had to pay him an annual tribute.

Signing of the treaty saw an immediate influx of 200 to 300 Danish officials, soldiers and their families come to live amongst the 3,000 villagers already in Tharangambadi. The Europeans kept to themselves, living inside Fort Dansborg and the streets around it that they’d built, far away from the local Hindu and Muslim populace.

Fort Dansborg, at 60 metres long and 11 metres wide, was the second largest fort ever built in Danish history. Danish in design, it was the handiwork of Admiral Ove Gjedde assisted by the Nayaka king, and the first edifice to be put up in 1620. There were store rooms, barracks, a church, residences for the governor, merchants and chaplains, and even a prison inside its walls surrounded by a [now disappeared] moat.

Today, the fort houses the Tranquebar Museum packed with a musty collection of quirky objects recounting the Danish-Indian story. From lists of ships which passed through its port to anecdotes recounting Danish-Indian encounters, it offers a unique insight into a relationship not many know of, or talk about. 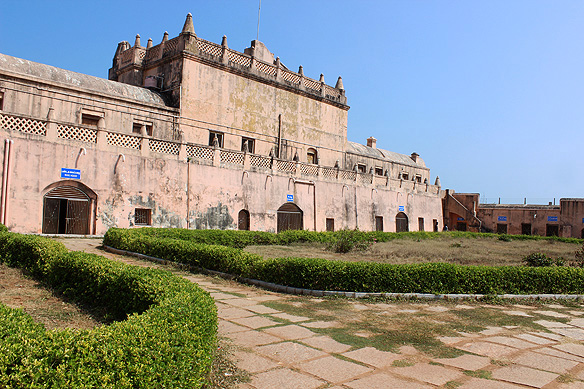 Fort Dansborg, headquarters of Danish rule in India. Those rows of rooms with blue markers were store rooms and warehouses, with an armoury, prison, and a beer and wine room thrown in. 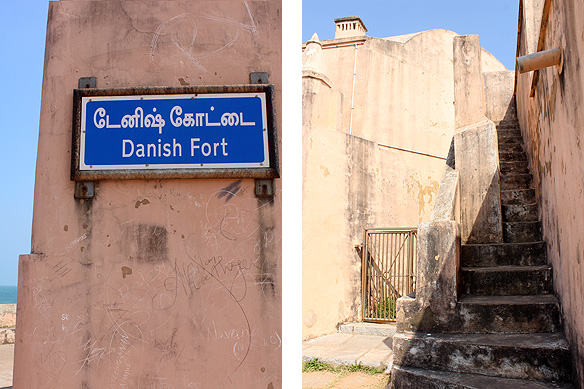 Entrance, Fort Dansborg. The day I went I was the only visitor at the fort.

This one is dedicated to Protestant Christians in India!

While Catholicism was largely introduced to the Indian subcontinent via the Portuguese, Protestant Christianity found its way here through none other than, yes, the Danes. Would you have ever guessed it? Aah, the secrets travels reveal.

It was the year 1705. King Frederick IV of Denmark, in his capacity as the head of the Lutheran Church of Denmark, had decided to kindle the holy spark in the “heathen” natives of his colony by sending the first ever Protestant Mission to India. Two German missionaries were hand-picked for this special task aptly named Tranquebar Mission. They were Bartholomaus Ziegenbalg and Heinrich Plutschau. On 9 July, 1706 the two landed at the trading post. Little did they both know they were going to change the religious makeup of India, forever.

There was much opposition to their work by the natives and the Danish authorities. But the two plodded on, diligently, and managed to baptize their first Indian convert on 12 May 1707, within 10 months of their arrival. And another four followed soon after.

The site they used for the baptisms was Zion Church, a Danish church built in 1701 for the governor’s exclusive use. With the missionaries, the church opened its doors to the natives for the first time. On 1 May, 1919, this same church became the site of the formation of the Church of South India.

Plaque put up in 1906 to commemorate 200 years of the spot where “by the grace of god, landed on the 9th of July 1706, the First Ev [Evangelical] Lutheran Missionaries to India Bartholomaus Ziegenbalg and Heinrich Plutschau.”

Pondicherry couple deep in prayer at the Zion Church. They were on a pilgrimage day trip.

4. The Tamil mantle for the New Testament

If it wasn’t for Mr. Ziegenbalg, Christian practice in India would have been very different. Armed with a printing press from Germany and adamant to first master the local Tamil language, he set up India’s first Tamil printing press and went on to translate and print the New Testament in Tamil in 1715. A ground-breaking initiative for his mission.

To add to it, he translated German hymns into Tamil and Tamil books into German, preached in Tamil, produced the first Tamil dictionary, and even recommended Tamil be taught in Germany. What I, at a personal level, was most impressed by was finding out he was the first to start a school for girls in India in 1707 and introduced the free noon-meal scheme in schools which still runs throughout the country under various NGOs.

Since Zion Church was reserved for the Danish elite, he built a new church in 1718 and named it New Jerusalem Church. This was principally for the use of the natives with Tamil sermons and choirs. And thus, a European religion took on a Tamil mantle with an identity all of its own. The hymns were sung to German tunes and the Bible understood in local contexts.

Ziegenbalg died in 1719. He was just 37 years old. His remains were brought back to Tranquebar, to the city he had helped shape, and lie interred in the New Jerusalem Church’s apse. Germany and Denmark may or may not have forgotten Ziegenbalg, but Tranquebar celebrates him to-date.

New Jerusalem Church, Bartholomaus Ziegenbalg’s church for the Indian natives, with King Frederick IV of Denmark’s monogram on the facade. 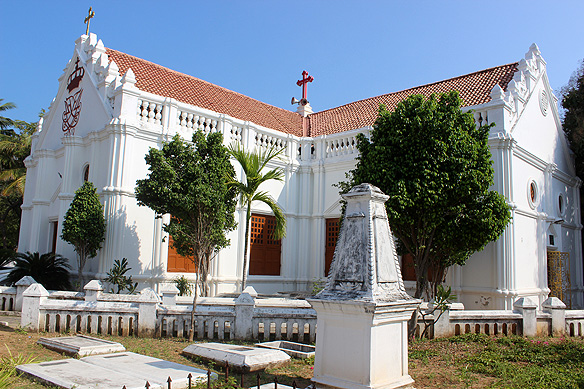 Tombs in the church’s graveyard. The church is on King’s Street.

Inside the cross-shaped New Jerusalem Church. Services are conducted every Sunday, without fail.

5. Where Danish India and the Place of the Singing Waves met

Danish India’s Tranquebar was already a thriving village of 3,000 fishermen when it changed hands. Its Indian name was, and now again is, Tharangambadi, meaning Place of the Singing Waves. Kind of quaint, isn’t it.

For over 200 years the trading post attracted merchants and missionaries from Europe, as well as Indian dyers and weavers into its realm. A textile industry of silks and dyed cotton flourished in the city which along with indigenous black pepper became the mainstay of its exports.

Not that this made them super rich. They just scraped through and were never any real threat to the Portuguese or the British. What, though, was in their favour, was their own perseverance and neutrality. Whilst the others fought over land and power, Tranquebar remained non-partisan till the end, right through its journey from being part of the Danish East India Company, to a Dano-Norwegian colony and lastly, a Danish colony. In 1845, it was finally forced to sell out to the British.

Tranquebar’s old town is often considered to be the most European of the various colonial settlements in the sub-continent, sans too many Indian influences. A rare heritage for the local fishermen to call their own.

Ruins of Tranquebar’s harbour, a thriving trading post which exported Indian textiles and spices to Europe.

Happiness at Tharangambadi: Place of the Singing Waves.

Left: A fisherman’s boat in the sun-drenched one-time Danish harbour; Right: 13th Century ruins of Masilamani Nathar Temple dedicated to Shiva. Both remnants of another time, another life in Trankebar aka Tharangambadi. ❤

[Note: This blog post is part of a series from my solo and independent travel to the temple towns of Tamil Nadu over 7 days in the first week of March 2020. To read more posts on my temple town series and Tamil Nadu, click here.]