Sunrise at Agra Fort. Why sunrise ? Why not noon, sunset, twilight … Simple. Because at sunrise, when the warm golden light dapples over the 450-year-old walled Mughal palatial precinct and its deserted sprawling expanses, something close to magic happens. Plus I like mornings. 🙂

Built in the Indo-Islamic architectural style, the bow-shaped Fort with its 70-feet-high bastioned walls facing the Yamuna river, served as the Mughal empire’s military strategic point, as well as their royal residence.

The story of the Agra Fort is the story of three of its Mughal emperors—their resolute ambition, blinded passion, and romantic love is emblazoned over the red, intricately carved sandstone and translucent marble edifices. The story has been recounted countless times in Indian history books, movies, and music. Agra Fort lets one relive it, in what was once their home, in the company of its memories.

The emperors were Akbar, Jahangir, and Shah Jahan.

The saga starts with Akbar, the proverbial ‘ideal’ ruler, who inherited the imperial throne in 1556 at just 14 years of age, with no formal education or princely training and ruled for 49 years. His inheritance was a small non-descriptive region which he transformed to include nearly all of the northern Indian subcontinent, armed with a policy of conciliating conquered rulers through marriage and diplomacy.

His son Jahangir, also known as Salim, inherited his father’s love for the arts, but neither the commitment nor passion for stately matters, happy to lead a life of ease and comfort, saying in his memoirs, “six cups of wine and half a ‘ser’ of meat” was all that he wanted. Passionately in love with his 20th and favorite wife Nur Jahan, an ambitious woman of much charm and beauty, she fueled his alcohol and opium addiction, governing the state from behind.

The story unfolds with the advent of Shah Jahan, born Prince Khurram, who ruled a comparatively stable empire marked with great artistic achievement. He built the famed Taj Mahal for his beloved wife Mumtaz Mahal and was finally deposed and restrained by his son, Aurangzeb in the Agra Fort from 1658 to his eventual death in 1666. It is said that Shah Jahan died in Musamman Burj, a tower with a marble balcony facing the Taj, gazing loyally at the tomb housing his wife’s remains.

Since the 11th Century, a brick fort ‘Badalgarh’ had stood at the site of the Agra Fort, occupied first by the Rajputs, and thereafter the Lodis who made Agra their second capital in 1488. The Fort was seized by the Mughals in the Battle of Panipat (1526), to be lost and regained again in 1556 by Akbar.

The current edifice, a UNESCO World Heritage Site, dates back to 1573 when Akbar rebuilt the old brick fort with red sandstone from Rajasthan in the Bengal and Gujarat style. 4,000 builders worked on it every day for eight years.

Many of Akbar’s 500 architectural ‘Akbari’ gems were destroyed by Shah Jahan, who replaced them with inlaid marble poetic palaces such as the Sheesh Mahal and Khas Mahal, and mosques. The rest were destroyed by the British. Hardly 30 of Akbar’s 500 gems survive today. Less than 25 percent of the Fort is open to visitors. The magic is, nevertheless, intact.

Left: Hauz-i-Jahangiri [Jahangir’s Bath], 1611, considered to be a marriage gift from Jahangir to Nur Jahan; Right: the octagonal domed roof of Musamman Burj. 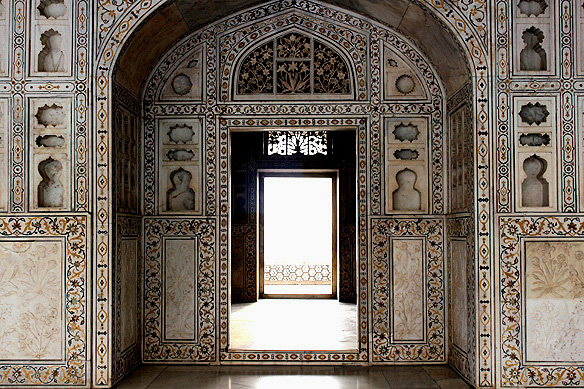 Perfect symmetry. The Musamman Burj originally built by Shah Jahan for his wife, Mumtaz Mahal, became his prison when his son Aurangzeb seized the throne. 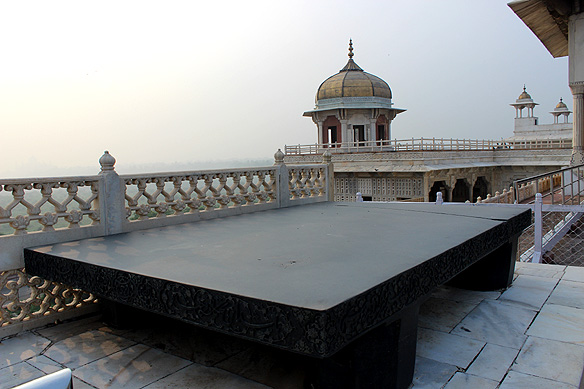 Jahangir’s black marble throne with the Musamman Burj in the background. 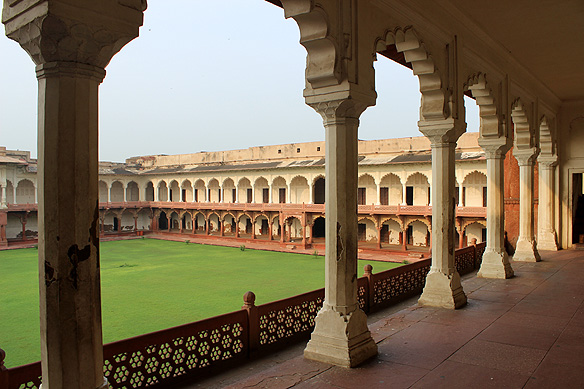 The Macchi Bhawan (Fish Palace) behind the Diwan-i-Am used to hold exotic fishes in ornamental tanks and fountains. 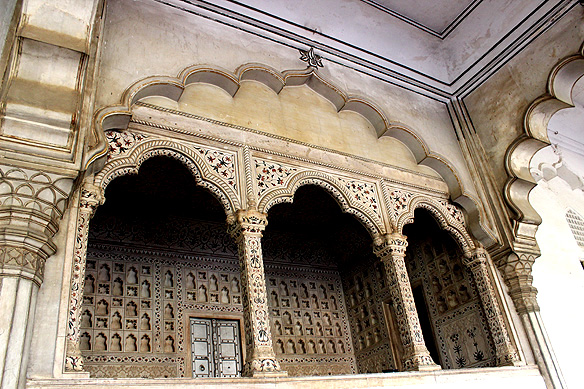 The Takht-i-Murassa, or throne room, in the Diwan-i-Am—the legendary peacock throne once stood here …

Agra Fort was, first and foremost, Emperor Akbar, Jahangir and Shah Jahan’s home. Left: Intricate red sandstone carvings in the Bengal style adorn the Jahangiri Mahal, the palace Akbar built for his son; Right: Arches within arches of the Diwan-i-Am where Shah Jahan addressed the public.

Note: This post is the seventh in a 7-part series on why Agra should be on every travel bucket list. To read the entire set click here.

[This post is a re-post. It was first published on ramaary.blog on 28 December, 2017. Due to COVID 19 restrictions, I am unable to generate new travel content. In its place I am reposting some of my favourite posts which I had blogged about earlier.]

18 thoughts on “#2 majestic agra fort: 7 reasons why agra should be on every travel bucket list”