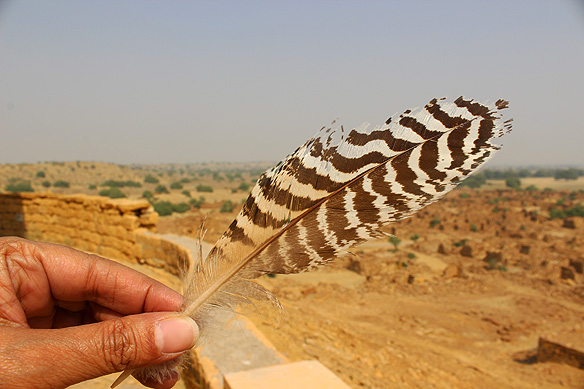 Thar Desert, or the Great Indian Desert as it is also known, is the large arid region in north-west Rajasthan surrounding the thousand-year-old enigmatic fortress of Jaisalmer on all four sides.

Covered over an expanse of 200,000 square kilometres, it is the world’s 20th largest desert, as well as the world’s most densely populated desert [at 83 people per square kilometre]. Some 40 percent of Rajasthan’s population lives in the Thar, eking out a living on its barren stretch through agriculture and animal husbandry.

Folk art and music offer a much-needed respite in the face of hardship here; just as vibrant-coloured odhnis and turbans give a dash of colour to the otherwise dusty, bare, uninhabited miles.

It is easy to be lulled into believing that Jaisalmer, steeped in history and gorgeous architecture, is all that warrants exploration in this corner of the world.

Truth is, the surrounding desert is no less rich in heritage and beauty. But its stories, unlike Jaisalmer’s, lie hidden under its shifting sands. Some are told to travellers who brave their way through the sand, rock, and shrubs under a blistering sun. Most remain untold until one sieves the sands, and digs a bit deeper.

For those who take the trouble, the rewards are immense. Don’t believe me? Scroll down. ❤

Deep in the Thar Desert is Lodurva, the old capital of the Bhati clan. All that remains of it, since the past 900 years, is its Jain Temple shaped like a Chinese lantern. Part of the 9th Century city plan, the temple, along with the rest of Lodurva, was attacked twice by Muslim invaders and abandoned in 1156 when Jaisalmer became the new capital. 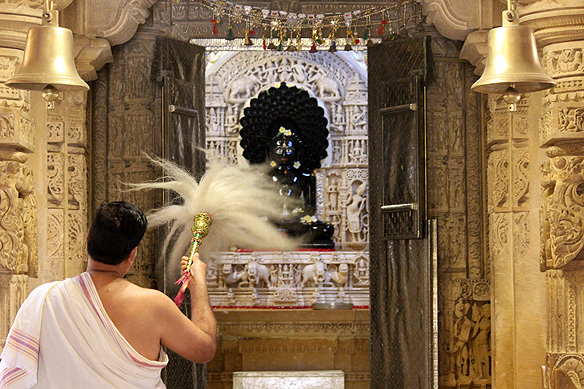 Renovated in 1615, the Lodurva Temple is dedicated to Parshvanatha, the 23rd Tirthankara. Parshvanatha lived in the 8th Century BC and is identified by the serpent hood over his head. According to local legend a snake emerges every night in the temple complex and drinks the milk left for it by pilgrims.

Jainism’s two sects, Digambar and Shwetambar, stem from the interpretation of Parshvanatha and the 24th Tirthankara, Mahavira’s teachings. But one thing remains consistent in all Jain temples across both sects: exquisite art.

From filigreed stone Jain temples in ancient capitals to an abandoned fort and 84 villages of a whole community who disappeared overnight because of the lecherous overtures of a powerful prime minster! Welcome to the world of the Paliwal Brahmins of the Thar Desert. 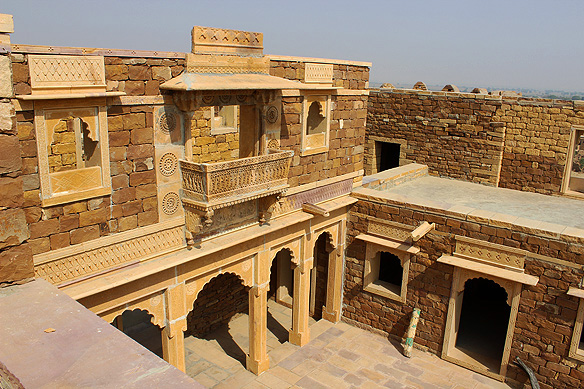 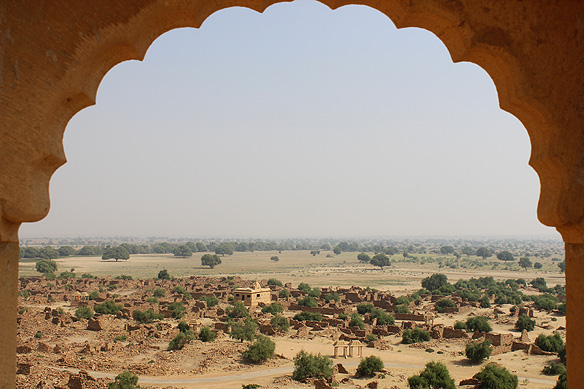 Khaba Fort, now reconstructed, stands sentinel in one of the deserted 84 villages. A gentle reminder of the prosperity the Paliwal Brahmins enjoyed at the time they decided to give it all up in 1824-25 when faced with Diwan [Prime Minister] Salim Singh’s amorous advances towards a beautiful young girl of their community.

Kuldhara, the most prominent of the 84 villages, is where the young belle who caught the mean and lustful Diwan’s fancy lived. Some of the 200-year-old structures in the village have been restored to recreate what it would have looked like in its heyday. Oh, and if you’re wondering where did all the Paliwal Brahmins disappear to on that fateful night in 1824, the answer is no one knows till date. 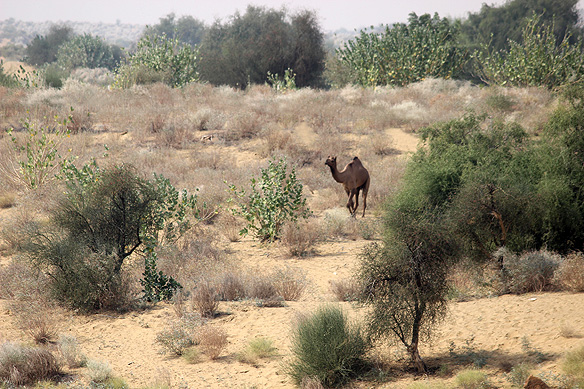 Just another wild camel enroute through the Thar Desert. 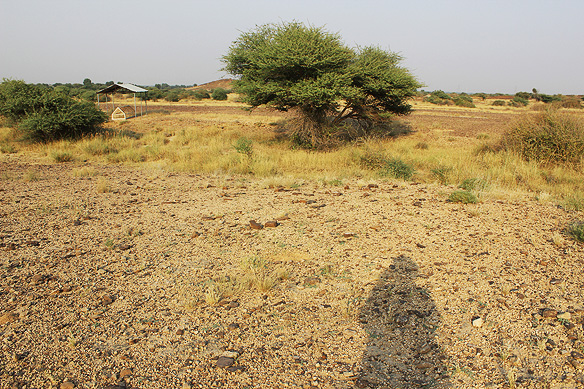 What makes the Thar Desert doubly unique is that its charms are not confined to dunes and built heritage. Akal Wood Fossil Park, a Biodiversity Heritage Site in its midst, contains wood fossils dating back 180 million years. Back then the Thar Desert had a hot and humid climate and was covered with huge conifer trees. A sharp contrast to the current desert landscape and flora.

So, ever wondered what a wood fossil felt like? Well, it is woody [obviously], but heavy as if it were stone. Needless to say, it is also eerie; like touching time all those millions of years ago. If you interested in the science behind wood fossils, here’s the definition as per a signboard at the site:

“When a tree is quickly buried by sediment deposition and protected from decay in the absence of oxygen and micro-organisms, groundwater rich in dissolved minerals flows through the plant cells replacing the original plant cell material. This process is called ‘petrification’ meaning wood that’s been turned into stone.” 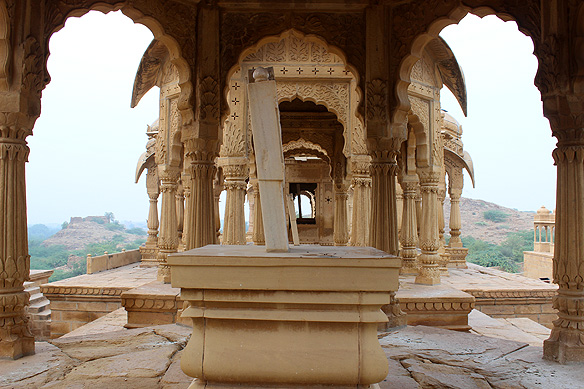 Thar Desert’s most poignant, poetic monuments are at Bada Bagh or Big Garden, a mere 5 kilometres from Jaisalmer. Bada Bagh is the royal cemetery and houses chhatris of Jaisalmer’s kings from the 16th to 20th Centuries. The ones in the above image are in Mughal style and newer, whilst those in the below image are the older Hindu-styled lot.

Plaques inside each chhatri depict the ruler on a horse along with his wives and concubines standing next to him with folded hands. The inclusion of the ladies in the cenotaph signify they committed sati upon his death. Sati is a former gory and glorified custom in India in which a widow threw herself on to her husband’s funeral pyre and burnt herself to death. Though banned in 1829, the last known sati took place in 1987. 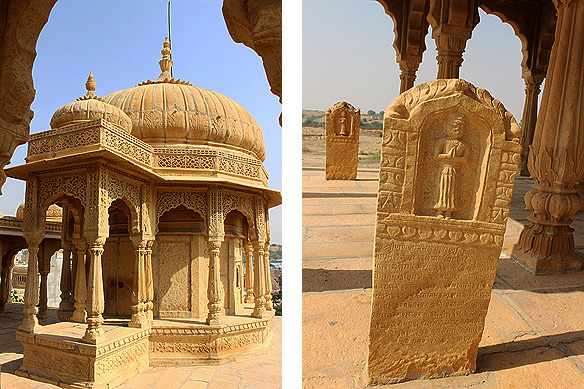 Vyas Ki Chhatri, Jaisalmer’s second funeral complex, on the other hand, is dedicated to the city’s high priest Brahmins. Named after Sage Vyas who wrote the Hindu epic poem Mahabharata, the complex rises out of the Thar Desert sands on a hill just outside the city. Its plaques don’t contain any warrior figures atop horses accompanied with demure ladies as in Bada Bagh. Instead, there are sombre solitary male figures here, with folded hands and in priests’ attire. 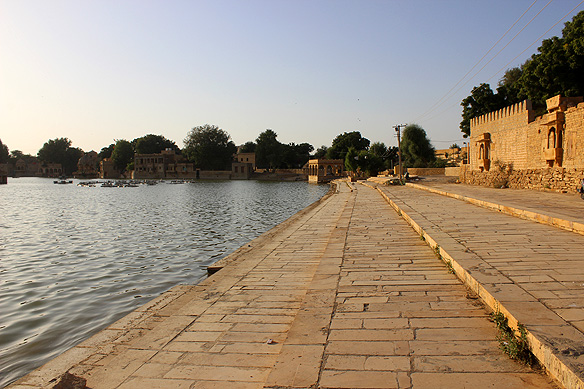 A desert’s most precious asset is its water bodies. For the Thar Desert surrounding Jaisalmer, this translates to Gadsisar Lake, an artificial lake built by Rawal Jaisal in 1156 and reconstructed by Rawal Gadsi in 1367. The lake provided water to Jaisalmer right up to the year 1965.

At the lake’s entrance is the lovely three-storeyed gateway called Teelon Ki Pol, a contribution by a prostitute called Teelon. To avoid its demolition by the angry king for her audacity in building it in his absence, she placed an idol of the god Satyanarayan on the roof, on the advice of the influential Brahmin priests. Result: The edifice still stands, fully intact. 🙂 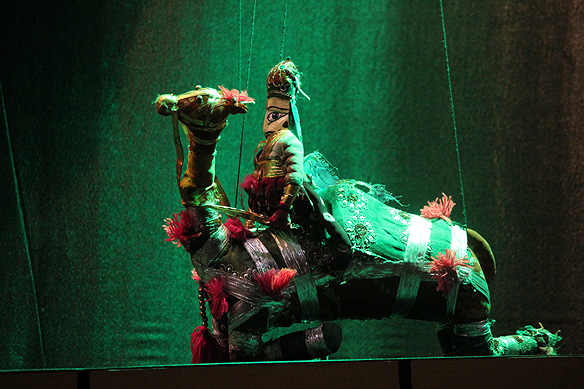 Lastly, what is Rajasthan without its puppeteers! For centuries, folk tales, love ballads, and legends have been brought alive in the Thar Desert through Rajasthan’s string puppet performances. And if they still do, in the face of modernization clawing its ways through the desert, it is in some part because of the efforts of an elderly, unassuming [now retired] history school teacher, N.K. Sharma, who took it upon himself in 1998 to set up a live puppet theatre next to Gadsisar Lake.

Self-funded, the performances have given indigenous puppeteers a means of livelihood and made the art form accessible to outsiders in all its authentic glory, making even a layperson like me understand them. For example, the kneeling camel above is a scene from Rajasthan’s epic romance of Dhola and Maru. ❤ 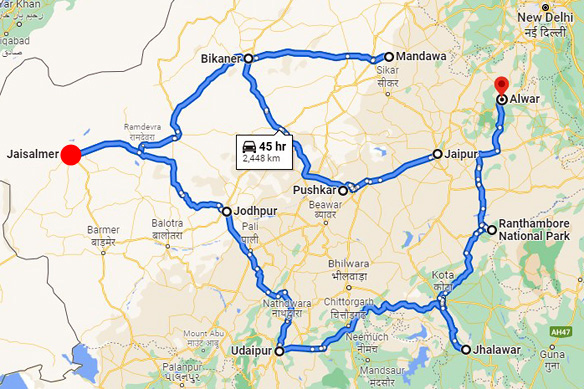