I’d once read that in London, at the turn of the 20th Century when the British Raj was planning to move its capital from Calcutta to Delhi, a British newspaper had called Delhi the ‘graveyard of dynasties’.

It was in reference to the countless tombs of the Muslim dynasties and their key officials, first those of the Delhi Sultanate and then the Mughal Empire, who had ruled Delhi for 660 years. These tombs dot every nook and corner of the city. Some are grand and ostentatious. Some humble and tiny. But they are everywhere.

Many have crumbled over time and been replaced with the fast-burgeoning, steel and concrete ‘New Delhi’. I wonder how many there would have been, say a hundred years ago, or at the closing chapter of the Mughals in 1857, as I gasped in awe at the ceiling inside.

But of such incredible grandeur that it took my breath away. And it did not even belong to a ‘ruler’ or built at the zenith of an empire. It was for just one person, the Wazir or Prime Minister, when the Mughal empire was slowly but surely fading away. 1754 AD.

Such flamboyant displays of wealth and power seemed to be the order of the day. 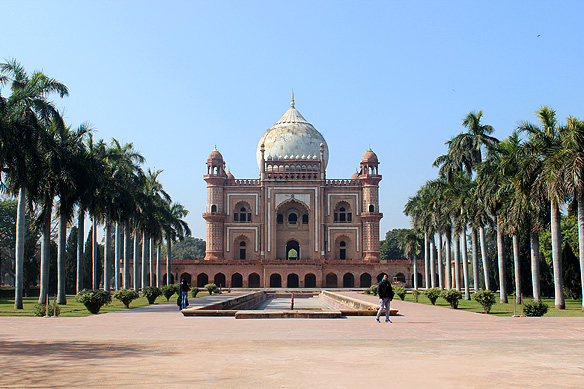 The tomb was built for the second Nawab of Awadh, a rich and powerful Persian gentleman better known by the name Safdarjung, and has an interesting story to its credit. Safdarjung’s full name, by the way, was Abul Mansur Mirza Muhammad Muqim Ali Khan.

He was an ambitious gentleman and soon found his way to the post of Wazir or Prime Minister in the Mughal court in 1748. He was also, uhm, slightly overambitious and made the emperor’s life miserable by usurping powers. If that were not enough, he had the Emperor’s mother’s [Qudsia Begum’s] paramour [an eunuch called Jawed Khan] murdered thinking it would win him brownie points. Things did not go as planned and he was driven out instead in 1753; he died the next year.

When his son, Shujaud Daula became Wazir, he pleaded with the emperor to forgive his father and allow him to be buried in Delhi. On being granted his request, he built this grandiose affair designed by an Abyssinian [Ethiopian] architect to house Safdarjung’s grave. But money was scarce, so the son stripped another tomb [that of Abdur Rahim Khan-i-Khanan] of its building material, to decorate his dad’s.

What’s also interesting is the location. Safdarjung Tomb is away from the usual Mughal burial areas. Reason being Safdarjung was a Shi’a Muslim and there’s a Shi’a dargah, Shah-e-Mardan, in the vicinity. The Mughals were Sunnis.

Stories. Such stories these stones do tell. 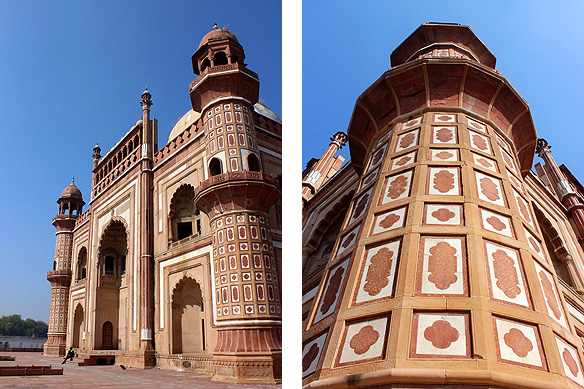 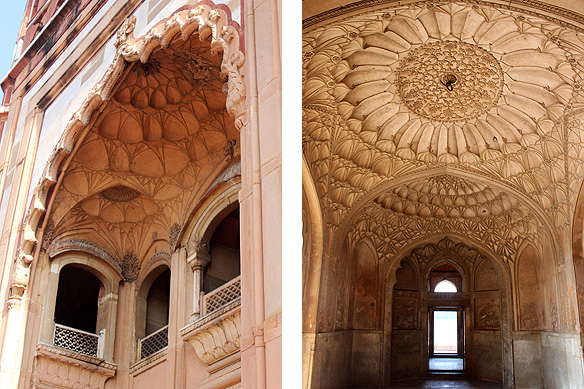 Whilst my mind rewound what I’d read, my heart literally sang at the detailed incised plasterwork which turned the ceilings into veritable works of art in the last monumental tomb garden built in the Mughal-era.

I also noticed a number of features which set it apart from other tombs. The elongated height of the tomb which made it look disproportionate, the five-part facades with Shahjahani cusped arches and attached minarets, and the three-domed wistful mosque. And there were the usual suspects such as the char bagh garden edged with pavilions christened, in this case, Moti Mahal [pearl palace], Jangli Mahal (forest palace), and Badshah Pasand (King’s favourite). They were, apparently, used by Safdarjung’s family and relatives when they visited his tomb. His wife lies interred next to him in the vast, otherwise empty crypt.

Not many people visit Safdarjung’s tomb. The entrance gate, although grand and decorated profusely with painted muqarnas, gives no clue to what treasures lie inside. Outside, the heavy, constantly streaming traffic leaves little opportunity to venture in. But look what I found inside was all I could marvel at. Definitely, not just another tomb! 😊

The glorious ceiling in the main burial chamber. A cloud burst of kinds!

Safdarjung’s solitary gravestone lies in the central chamber surrounded with eight rooms in the hasht-behisht floor plan, a re-creation of the eight gates of paradise in Islam.

Built with red sandstone and marble ‘stolen’ from another tomb, the only original expensive piece of embellishment in Safdarjung Tomb is a strip of pietra dura at the entrance of the main chamber. Right: The fairytale-like mosque in the complex is unfortunately closed to the public.

I loved this viewpoint. From this angle, the tomb reminded me so much of Humayun’s Tomb and even the Taj Mahal. 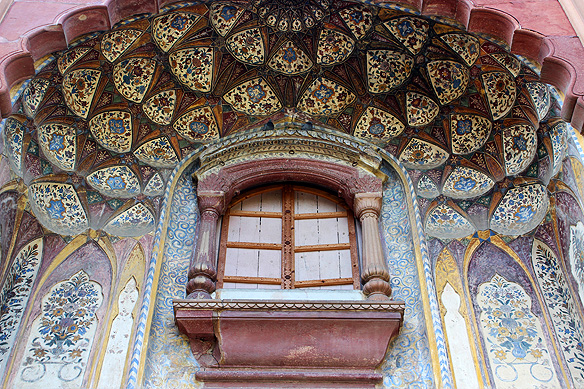 Elaborate restored muqarnas, painted in natural colours, fill the deep arches of the tomb’s entrance gateway. The image above is a zoomed-in detail.

Come dusk, Safdarjung Tomb, along with Humayun’s Tomb, Red Fort, and Qutab Minar fall under the ambit of Delhi’s night tourism initiative. What this means is that the sites get lit up and transform into a magical world of golden dappled monuments floating in darkness. I had heard much of it, seen many photographs, but not been to any yet, that is not at night.

Now at Safdarjung Tomb, I was determined to experience it, first hand.

Camera in hand, I seated myself in front of the tomb and clicked away as the minutes passed. The balmy Indian summer day gave way to the long lazy shadows of the afternoon sun which in turn led to a musky lavender dusk. The lights got turned on and started to cast their softness on the stone. Purple skies, waiting in the wings, followed, to be a backdrop for a, by now, flaming Safdarjung Tomb reflected equally magnificently in the waterway. Just when I thought it couldn’t get more spectacular, the night sky went pitch black [it was a moonless night] and the tomb, and its reflection, both shimmered in bright silver light.

Mosquitoes, busy biting my arms and whirling over my head, brought me back to earth—with big red bumps. It was time for me go. Goodbye, Safdarjung Tomb. It was lovely meeting you.

PS. I am not going to caption the below images, but will let them speak for themselves … ❤ 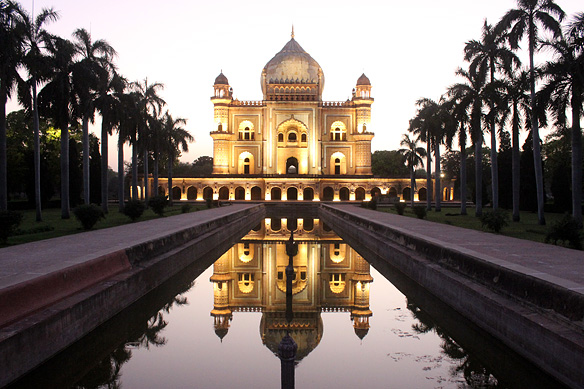 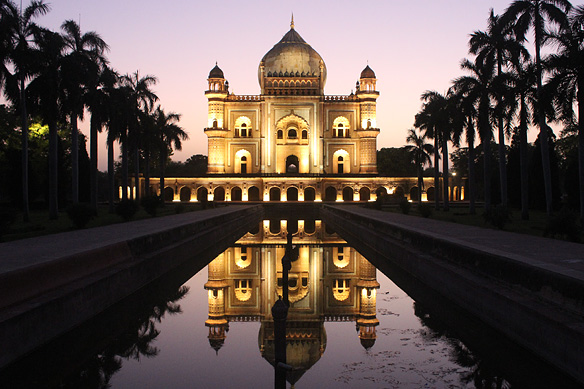 17 thoughts on “travel diaries: a mughal wazir’s tomb in day and night”