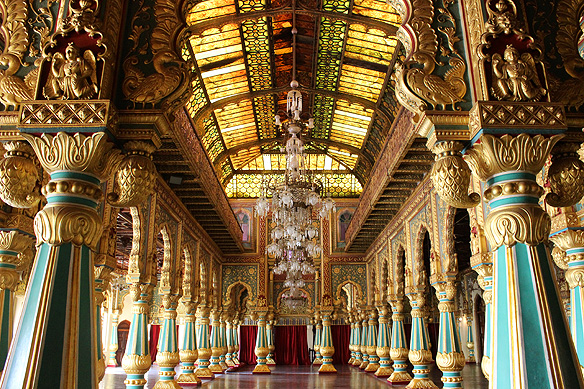 What if I told you there is a small town in South India which will forever remain your favourite, long after you visit it. What if I told you that in this town, frangipani trees sway gently and history, heritage, art and literature sit in easy camaraderie. That people here are simpler and the sky is bluer. Would the traveller in you jump for it?

I am talking about Mysore, renamed Mysuru, its original name, in 2014.

Less than a million-population live under its green shade of aged fig trees and their sprawling branches. Its wide dusty roads weave their way through a life where nothing much has changed over time.

From 1399 to 1950 Mysore was the seat of the Wodeyar dynasty, rulers of the Kingdom of Mysore except for a brief interlude when Hyder Ali and his son Tipu Sultan snatched the reigns. The Wodeyar family still lives in the Mysore Palace and the dynasty’s legacy permeates the entire town. From its seven palaces, of which two have been turned into museums, to its tutelary goddess perched high up on a hill, to its terraced gardens over the sacred Cauvery river.

Mysore is also where RK Narayan lived and wrote his acclaimed English novels set in the fictional town of Malgudi, a town he conceptualised in 1930, right here. His literary works made India both accessible and comprehensible to the rest of the world. To explore Mysore is to peek into Narayan’s imagination.

I was in Mysore for five days and four nights earlier this year, during which I dedicated one full day to just Mysore. Verdict. I loved it, and know I would want to go back. I would like to see it all lit up for the Dussera festivities as it has every year since 1399. I would like to stop by Narayan’s house, now a museum, and read one of his books inside.

Till then, till I make my next, deeper layer of exploration of Mysore, I would like to share with you what I did do over one day in one of my favourite cities in India. Enjoy. 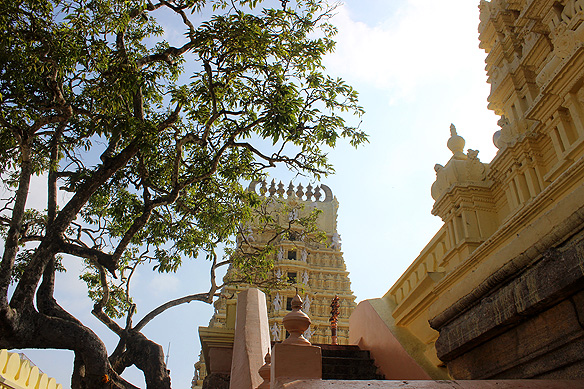 Perched high up on Mysore’s Chamundi Hills is the medieval Chamundi Temple—home of Chamundeshwari or Durga, the tutelary goddess of the Mysore Maharajas since the dynasty’s inception in 1399. To date, on the 7th day of Navratri she is decorated in jewels donated by the royal family and on Dussera, her double is carried around the city in a grand affair as part of the celebrations.

To reach the temple you can drive up a road circling the 838-feet-high hill or climb up 1,008 steps. Any surprises: I chose the former. Half way up the hill, on the 700th step to be exact is a gigantic, granite, 15-feet-high monolith of nandi [Shiva’s vehicle].

Like most ancient Hindu temples, Chamundi Temple is also intertwined with a legend. And that too a rather significant one. If you are familiar with Hindu mythology you would have come across the story and depiction of Mahishasura Mardini countless times.

The story goes that many eons ago Mysore was under the clutches of the evil demon Mahishasura. After a fierce battle, Chamundeshwari managed to kill him and free the city. From then on, she became known as Mahishasura Mardini, the one who overcame Mahishasura. Mysuru, Mysore’s original name literally means village of Mahishasura. 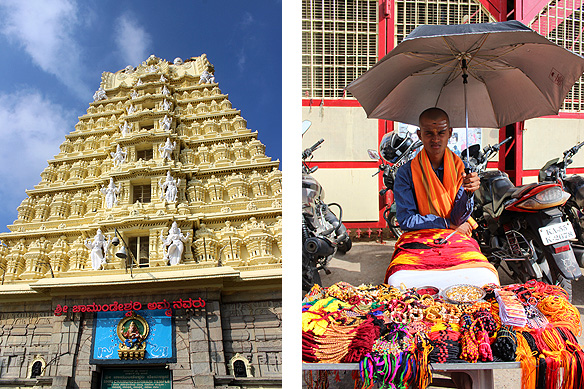 Left: Chamundi Temple’s iconic, towering, 17th Century gopura; Right: Talismans and amulets, a young Brahman with his wares for sale outside the temple. 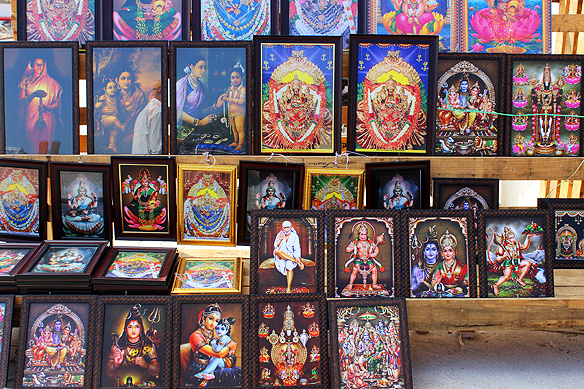 Another stall, this time its prints of gods and goddesses from the Hindu pantheon with some Raja Ravi Verma paintings thrown in for those who prefer the fine arts. Note: 4th and 5th from left, in the 4th row from bottom is the goddess Chamundeshwari. 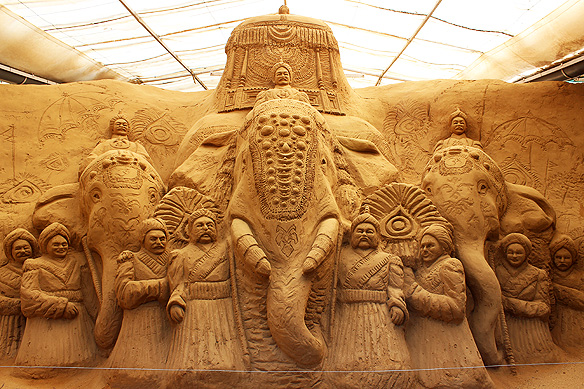 Guarded and guided with Chamundeshwari’s blessings, make your way to the Mysore Sand Sculpture Museum. What makes this museum a must visit is not so much its exhibits [they are fantastic], but rather the person behind them.

Meet MN Gowri, a 30-year-old postgraduate in Fine Arts [Sculpture] from Mysore and the only woman sand artist in Karnataka who is otherwise often found on beaches breathing life into sand.

The year was 2014. With a loan of Rs. 20 lakhs and a leased one-acre plot on Chamundi Hills, Gowri decided to make her dream to showcase her sand sculptures come true. It took her eight months, working from dawn to dusk, to create the museum’s 150 sculptures on 16 themes from 115 truckloads of sieved construction sand.

Sculpture themes in the 13,500 sq. ft museum range from Mysore’s heritage and religion to wildlife and ancient civilizations. Even Disneyland makes an appearance. There are kings and lovers, the goddess Chamundeshwari and mermaids, all assembled inside, creating a microcosm of life and earth.

Travel tip: If looking for a souvenir, there are numerous gift shops inside the museum complex. The handmade jewellery by MB Mandeep is especially charming. 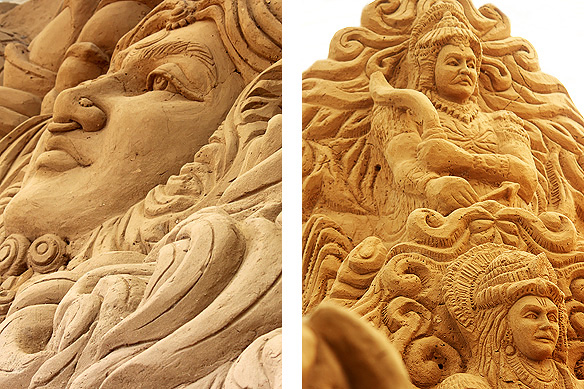 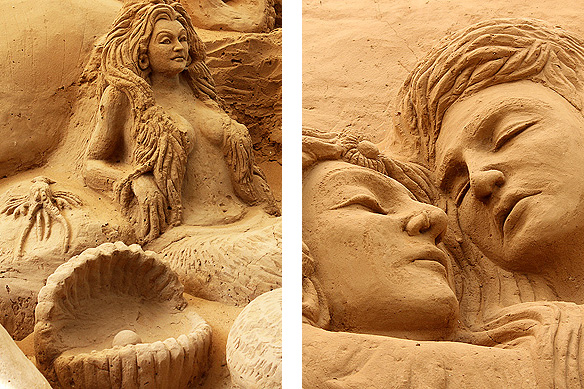 Left: Mermaids with their pearls; Right: Love at peace, and asleep? 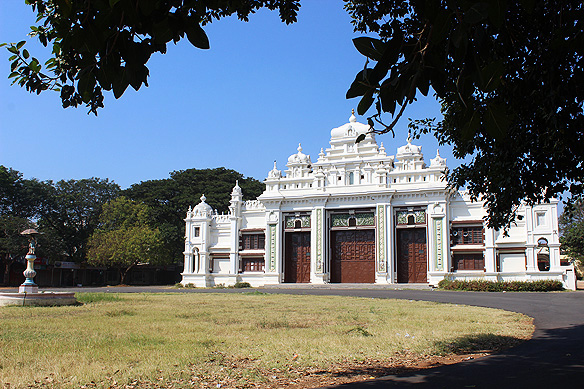 You don’t have to be an art buff to be bowled over by the paintings at Jaganmohan Palace Jayachamrajendra Art Gallery.

Sixteen original Raja Ravi Verma paintings include the celebrated Malabar Lady, Galaxy of Musicians, Sairandhri, Victory of Meghanatha, Lady in Moonlight, Suckling Child, and Harishchandra. Then there is SL Haldenkar’s Glow of Hope in watercolour in which a woman holds a lit lamp and the lamp’s light reflects off her. Colossal paintings of royal events before India’s independence only add that extra magic to the collection.

There are also works of local Mysore artists, a musical instruments gallery, and French clocks with cupids and miniature soldiers. All housed in an airy 1861 palace built by the Wodeyar rulers as a temporary home between the burning down of the old palace and completion of the new imposing Mysore Palace.

PS. To know more about Raja Ravi Verma and his role in the Indian scheme of art, here’s a fabulous article about him. 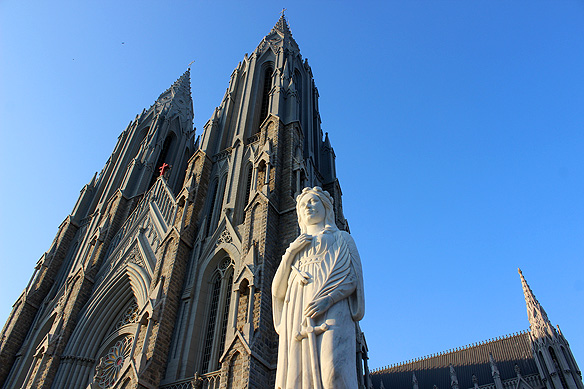 “A French-designed statue of a 3rd Century Greek Saint in a German-styled cathedral in the heart of South India.” That is Saint Philomena’s Cathedral for you, dedicated to Philomena [291 – 304 AD], the patron saint of babies, children, and youth.

Towering over the city with its 175-feet-tall spires in the image of Cologne Cathedral, Saint Philomena’s Cathedral is one of Asia’s tallest churches. A sombre, reflective air permeates its nave and transepts while a staircase leads down to the crypt where an effigy of the Saint lies deep in sleep.

When the capital of the Kingdom of Mysore moved back to Mysore from Srirangapatna post the 1799 siege, Maharaja Krishnaraja Wodeyar III built a small church in 1843 for the British East India Company officers and soldiers. In 1933, his grandson Maharaja Krishnaraja Wodeyar IV decided to make the church grander and lovelier to house a recently acquired relic of the Saint. The Frenchman Daly was commissioned to design the church, and the result is what we see now.

Lunch: A Mysore Dosa or two

Hungry by now? A good place to stop for lunch is Mahaveer Restaurant across the road for a Mysore dosa. After all, no trip to Mysore can be complete without its dosa! 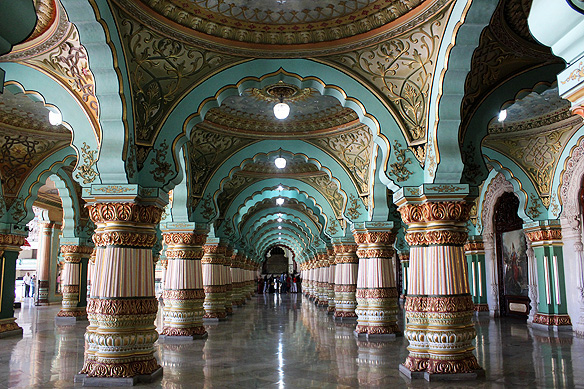 Without a doubt, Mysore’s centrepiece is its Mysore Palace. Colossal, lavish, loud, and colourful. For this very distinction, it deserves a good few hours and a guide to point out its fascinating details which are otherwise easy to miss because of its scale.

When the Old Palace was partially burnt down [you can still visit what is left of it], the new and current Mysore Palace was built from 1897 to 1912 at a cost of US$ 30 million with British Henry Irwin as its architect. Though a museum now, the palace still serves as the official residence of the royal Wodeyar family and seat of the Kingdom of Mysore.

Indo-Saracenic in style, its highlights are its three glittering halls: the octagonal golden Kalyana Mandap or Marriage Pavilion where marriage ceremonies were held, the turquoise-blue open-sided Public Durbar Hall where the king addressed common folks like you and I on special occasions and festivals, and the chandelier-filled Private or Khas Durbar Hall where he met those who were ‘khas’ meaning special. The royal family continues to use these halls for key events.

Scattered between all this sumptuousness are 26 murals of the city’s famous Dussera festivities painted by five of Mysore’s finest artists, and oil paintings of the royal family posing handsomely. 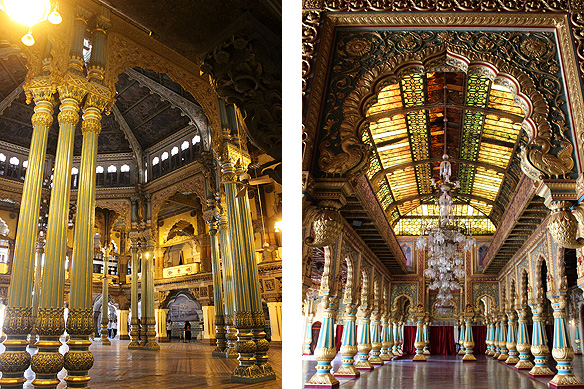 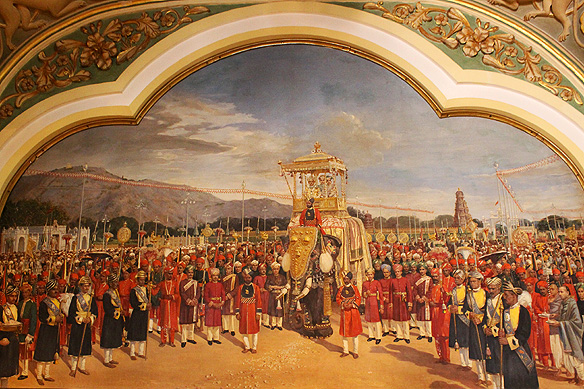 Maharaja Krishnaraja Wodeyar IV [1884 – 1940] at the Dussera festivities, one of the 26 murals lining Kalyana Mandap. 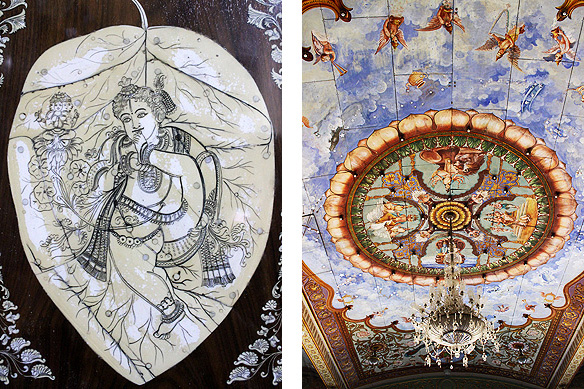 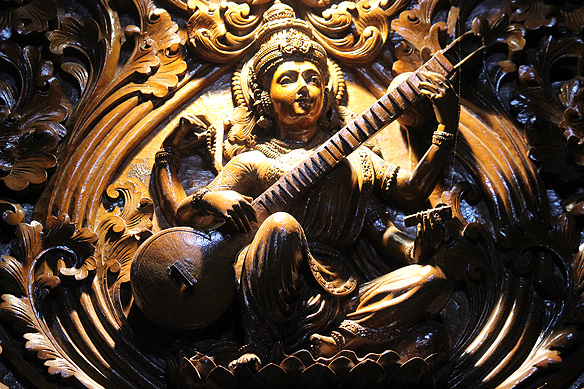 Saraswati, goddess of knowledge, music, art, and learning presides over a door frame as she strums her sitar. 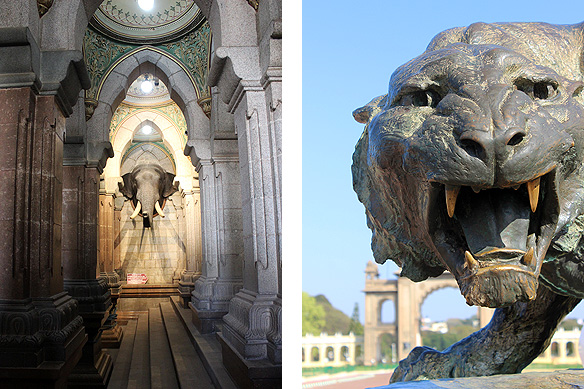 Left: Walk past and you just might miss it. Two elephant heads guard the inner palace; Right: A Wodeyar symbol of power and royalty—lions. Some snarling, others calm and collected, punctuate the palace and its grounds. 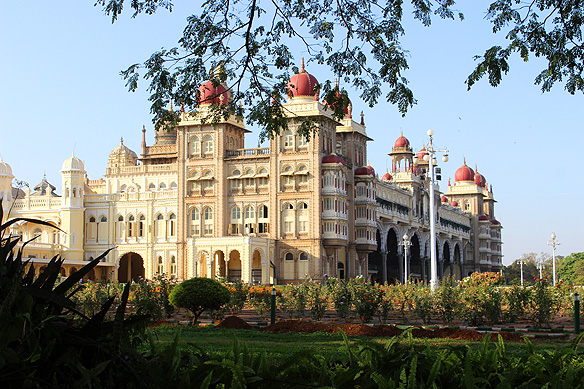 For that picture-perfect postcard of the 5-storeyed Mysore Palace. 🙂

The kiss of the sun for pardon,
and the song of the birds for mirth,
you’re nearer god’s heart in a garden,
than anywhere else on earth.
~ Dorothy Frances Gurney

There are two ways to spend an evening in Mysore. Do what only tourists do and watch a sound and light show at the Mysore Palace. Or do what the locals at large do. Go to Brindavan Gardens.

Dating back to 1932, the terraced gardens are the handiwork of Mirza Ismail, Dewan of Mysore during the reign of Maharaja Krishnaraja Wodeyar IV. The garden adjoins Krishnarajasagara Dam built over the Cauvery river.

Every evening, every half hour till the gardens close for the night [at 8:00 pm on weekdays and 9:00 pm on weekends], four peppy numbers are played to the accompaniment of a musical fountain. Around it are seated hundreds of locals. On cement benches and on the floor—cheering, clapping, laughing, their phone cameras on overdrive.

It is a fascinating spectacle. And one that epitomises the simplicity of the city and its people who find so much joy in this less than 10-minute show. A gentle reminder perhaps of the need to find happiness in the mundane. For the mundane to one is a highlight for the other. 😊

Once the display is over, may I suggest you hang around and wander through the lawns bathed in coloured light. Have some sweet corn. Watch the moon over the lake. One day in Mysore is really like no other day in one’s own life at all. ❤ 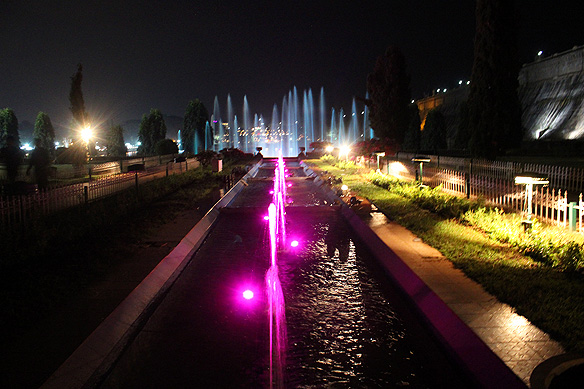 Top: Cell phone cameras on overdrive. Above: The serene 90-year-old terraced Brindavan Gardens make for a perfect end to a sights and sounds packed day.

With this, I come to the end of my Mysore series. I hope you enjoyed it. To read my posts on my day excursions from Mysore and other sights in Karnataka, please click here. Happy travels. ❤

[Note: This blog post is part of a series from my solo and independent travel to Mysore and its surrounds over 5 days in end-January 2020. To read more posts on Karnataka, click here.]

13 thoughts on “once upon a day in mysore: a one day itinerary of south india’s royal city”