What can one person do? A lot. Never underestimate the efforts of a single individual.

The above thought kept going inside my head, in a loop, as I was reminded of other feats achieved by individual collectors. Such as Dr. Kelkar’s mind-boggling collection of 21,000 artifacts at the Kelkar Museum in Pune and the Jung family’s quirky walking sticks collection at the Salar Jung Museum in Hyderabad.

I was standing amidst two centuries of an art style unique to India: The Thanjavur style of painting. Sheathed in jewelled colours and gold leaf, the masterpieces from the classical cities of Thanjavur and Mysuru, glinted and shone in the soft light. Calm in the face of my hard-to-hide awe.

It would be safe to surmise they were used to humans being bowled over by their resplendent beauty. After all, it had been part of their job. They had spent their lifetimes adorning sacred temples and shrines, in the company of gods.

And the reason, the only reason, I could cross time and space and be in the company of such glorious art, all at once, in one place, was because of one single person—Kuldip Singh.

When Singh, a Delhi-based architect, made a couple of queries about Thanjavur painting because of two artworks he had with him, little did he know it would lead to a life-long passion and a collection of 350 works of art. In 2019, he decided to bequeath his labour of love to the Chhatrapati Shivaji Maharaj Vastu Sangrahalaya, Mumbai’s most prestigious museum.

Singh wanted his paintings to be shared with the public for “education, appreciation and enjoyment”. He passed away in 2020.

The ongoing exhibition, in which I found myself in last weekend, where 53 works of the 350 were on display, described itself as a celebration of the collector, the collection, and the conservation process. And the magic that happens when all three come together. 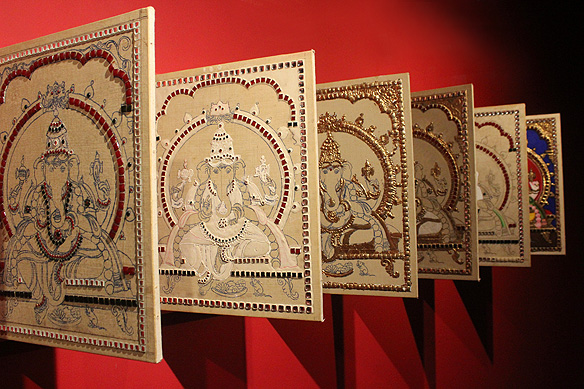 Distinct from other Indian art forms, Thanjavur painting, typified by its gold finery, is a classical South Indian painting style with origins in the city of Thanjavur in Tamil Nadu. In its role as an intermediary between people and their favourite gods, it traces itself back to the 1600s. However, the art form as we know it today, originated in the Maratha court of Thanjavur [1676 – 1855].

Known as palagai padam or ‘wooden plank picture’ in the local vernacular, they are the culmination of a complex laborious process. To start with, jackfruit or mango tree planks were covered with cotton cloth to form the painting surface. Thereafter, the cloth was treated with a paste made of chalk powder and tamarind seed paste and the design transferred to the surface through a perforated sheet.

Then came the semi-precious stones followed with the intricate gesso work, and laying of pure gold foil. Lastly, the actual painting was made with mineral colours and natural varnishes. In the end, the wooden back was sealed with paper. A sign that the picture on the wooden plank was now complete.

Of all the themes, religion has since the beginning, been its primary source of inspiration. Vaishnavism [worship of Vishnu], Shaivism [worship of Shiva], and Shaktism [worship of Shakti, the feminine energy], poems by poet-saints, and Hindu philosophies have all contributed to the rich content depicted in Thanjavur art.

Although epics were equally popular, it was the Ramayana which was more favoured, rather than the Mahabharata and Bhagavad Gita. This was as a result of the strong association of South Indian kings with Rama and the idea of divine kingship.

An interesting turn came with the advent of the first camera in India in 1840 and the subsequent rise of portraiture. The photographic studio found its way into Thanjavur paintings with rulers, noblemen, and courtiers in formal settings replete with curtain backdrops, tables, and chairs becoming the subject matter. 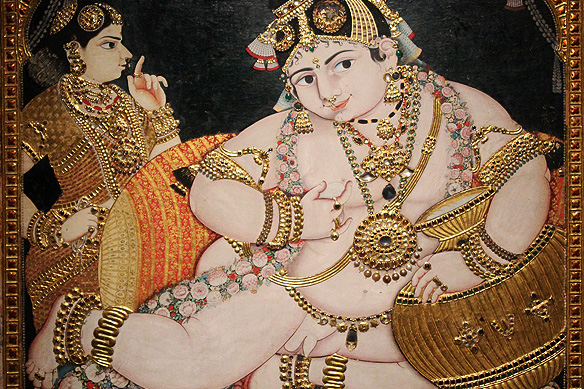 Navanita Krishna
Krishna, as a child, carrying a butter-pot is the most popular theme in Thanjavur paintings. In this form, he is always shown as white, plump and charming, adorned in resplendent jewellery.

All these have contributed to stories galore in Thanjavur art.

Take for instance the delicate glass painting of Tirukkurippu Thondar, a washer-man. His tale recounts that he had offered to clean the dirty rags of an old man, who was none other than the Hindu god Shiva himself. However, it started to rain and he couldn’t dry them in time. Anguished, Tirukkurippu started beating his head against the washing stone upon which Shiva’s hand emerged from it to soften the impact of the blows on his devotee’s head.

From washer-men to goddesses to poet-saints and their incredible lives.

During the 7th, 8th, and 9th Centuries there were 12 Alvars or Vaishnavite poet-saints who played a key role in propagating Vaishnavism through their songs. Of the 12, Nammalvar was, and is still, held in the highest esteem. According to legend, he spent 35 years under a tamarind tree without uttering a single word. When he finally spoke, it was to sing achingly beautiful hymns in praise of the god Vishnu. 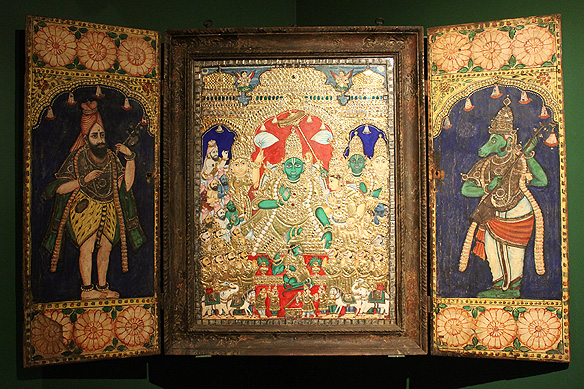 Whilst the paintings from Thanjavur were vibrant and colourful, awash with generous coatings of gold leaf, semi-precious stones and primary colours, those from Mysuru stood out for their reserve and monochromatic colour scheme. Here taupe and beige dominated, evocative of the sandalwood Mysuru is famed for, softly blending with the gold and stones, till they were hard to tell apart.

Singh was always pretty clear that his collection was not confined to the Thanjavur School alone. He considered the Thanjavur School, the Mysuru School, paintings done in the states of Kerala and Andhra during the 19th Century, to be all related to each other. Like one “extended family”. Why, even oleographs and glass paintings of that period were seen as part of the same style when elements of Thanjavur art contributed to their subject matter and, at times, treatment.

Over time, through its journey, Thanjavur paintings have morphed from a sacred art housed in temples and shrines, both public and private, to a decorative art adorning drawing rooms today. Along with it, the complex process has become substituted with one that’s dependent on plywood, coloured glass embellishments, artificial gold, and synthetic colours.

Is that good or bad? Perhaps what is more important is that the divine art has survived. ❤

Scroll on to enjoy a virtual tour of my personal favourites at the exhibition. And if, perchance, you happen to find yourself in Mumbai, do make your way to the museum and enjoy them in person. 🙂 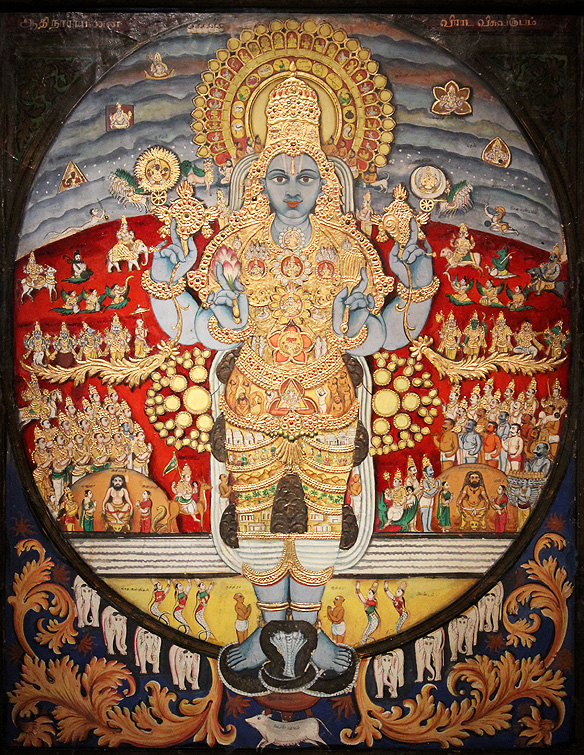 Vishvarupa [1850]
Vishnu as Vishvarupa or ‘universal form’ shows him with the cosmos inside his body and his own self placed in an oval frame, the cosmic egg, the source of all creation. 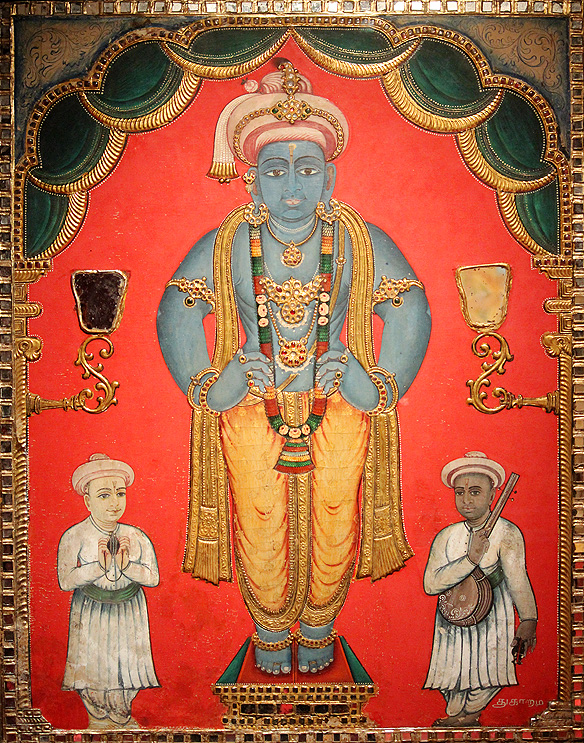 Vitthala
An incarnation of Krishna, Vitthala is popular in Karnataka and Maharashtra. Here he is flanked by Tukaram, a 17th Century poet-saint, and Tukaram’s younger brother. 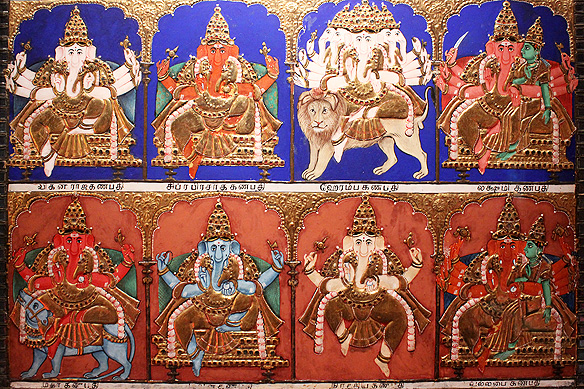 Detail, Sixteen Ganapatis
Each of the 16 forms of Ganapati or Ganesha, the remover of obstacles, is identified in the composition by a label and differentiated by a specific body colour and attributes. 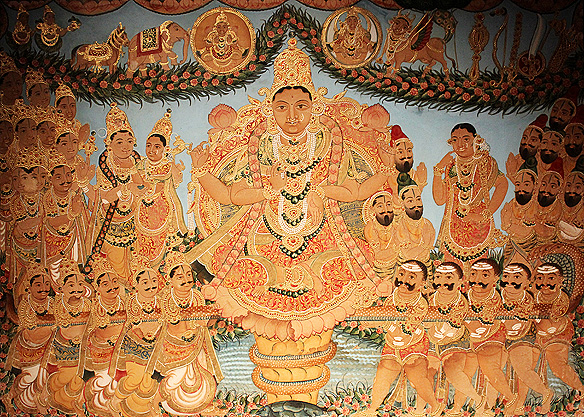 The Emergence of Lakshmi, by Durgada Krishnappa, Mysuru [1905]
Lakshmi, the goddess of wealth shown emerging from the churning of the oceans. 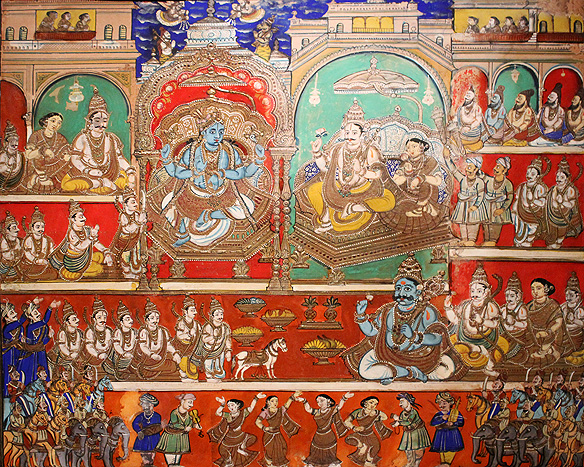 Pandava Pattabhisheka, Mysuru [1896]
Elements of Mysore palace and its throne find their way into scenes from the epic Mahabharata. Divided into different-sized registers, the various sections allow the artist to depict both important, as well as minor characters. 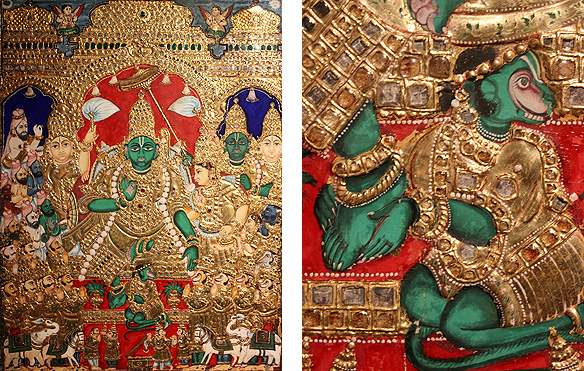 Ramapattabhisheka, Lord Rama’s Coronation
Of the many Lord Rama-inspired themes in Thanjavur paintings, that of the Ramapattabhisheka is the most widespread. The above scene has Rama and Sita on the throne surrounded by sages, kings, nobles and family, whilst Hanuman kneels and supports Rama’s right foot in both his hands [top right image]. 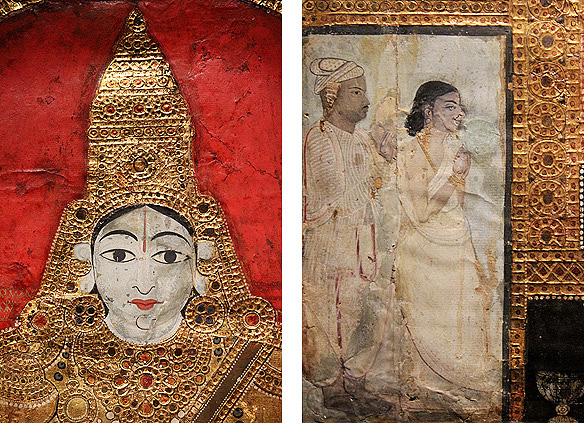 Detail, Parthasarathi [1808]
Worship of Krishna as Parthasarathi or the charioteer of Arjuna grew as a direct result of the teachings of the Bhagavad Gita. It is an impressive painting with Parthasarathi, as the central figure, and the donor couple dressed in white placed in the left corner. 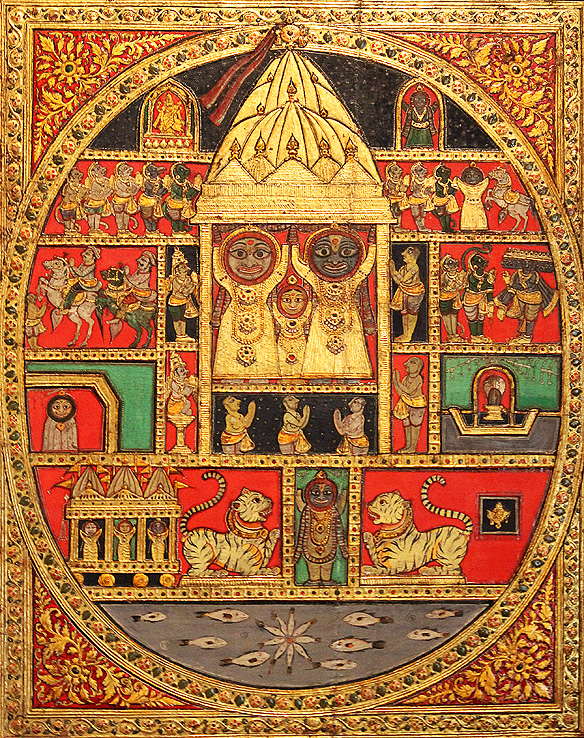 Jagannatha Temple Complex at Puri [1890 – 1900]
Famous Indian temples are another common theme in Thanjavur paintings. This is the Jagannatha Temple in Odisha which is part of the char dham, a set of four pilgrimage sites in India. Jagannatha or Krishna is in the centre and is flanked by his elder brother Balarama and sister Subhadra. 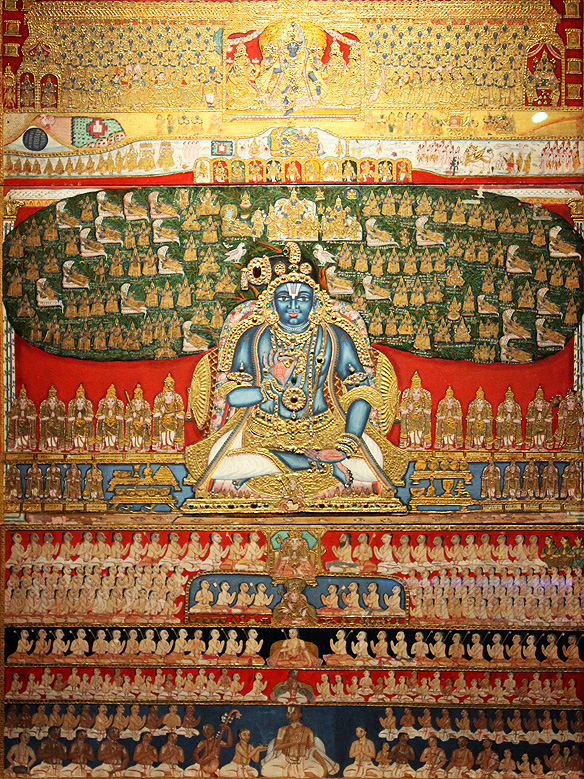 Nammalvar and the Lineage of the Acharyas [1895]
Among the 12 Alvars or Vaishnavite poet-saints in the 7th to 9th Centuries, Nammalvar is considered to have been the greatest. 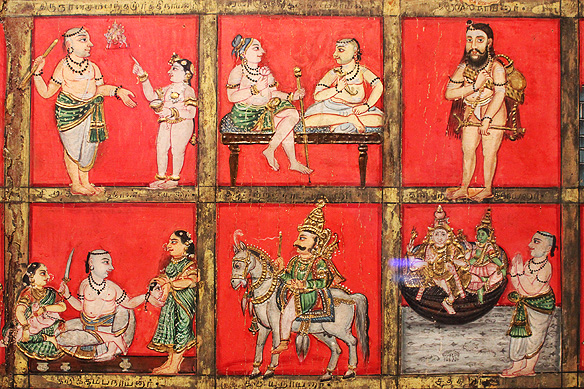 Detail, The 63 Nayanars
The 63 Nayanars were Shaivite poet-saints credited with composing devotional Tamil poems praising Shiva in the 6th – 8th Centuries. It was customary for patrons to commission both group and individual depictions of the Nayanars in Thanjavur art. 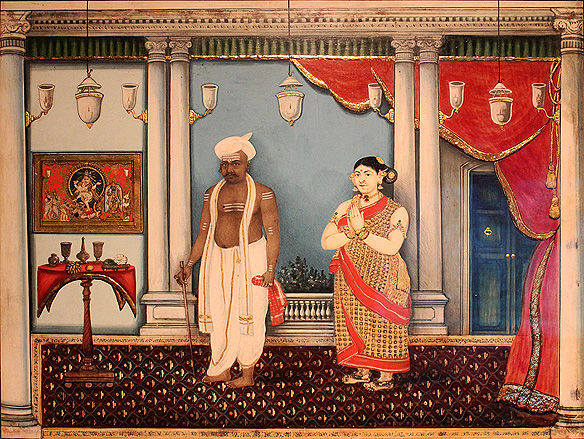 Portrait: An accountant and his wife 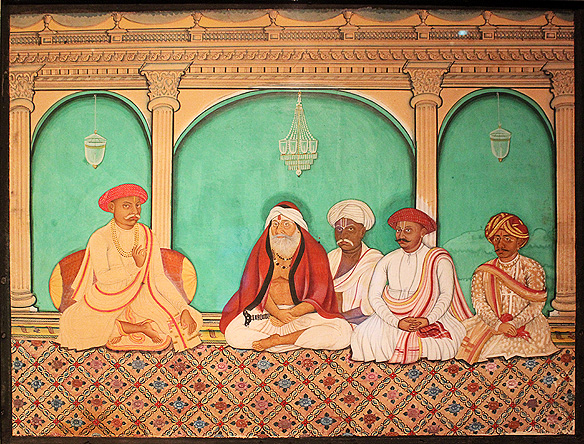 Group Portrait of 5 Artists, Mysuru [1856]
This rare and important group portrait in the Thanjavur style shows five prominent artists who worked in the royal atelier of three important kings of the Wodeyar dynasty from 1850 – 1910. The gold leaf and gesso typical of Thanjavur art reveals itself in the gold trimmings and jewellery. 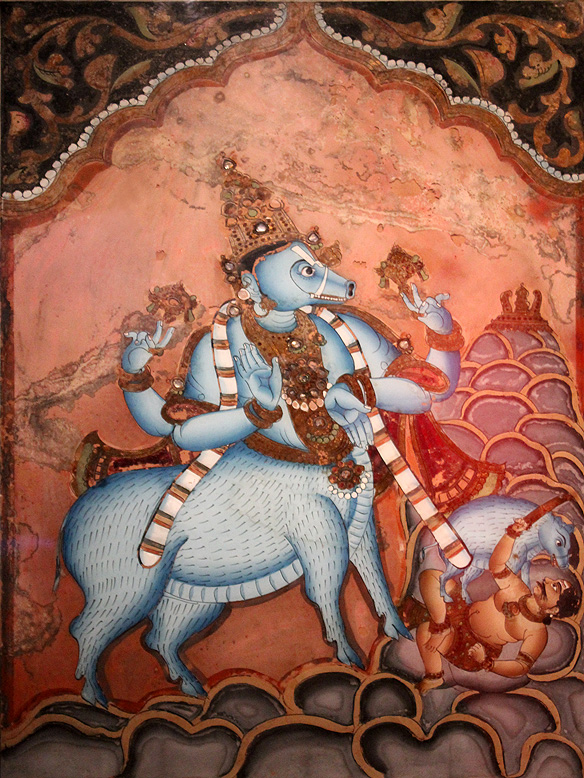 Varaha Avatara, Glass painting
Reverse glass paintings, in which a painting is literally made backwards, were introduced to India in late-18th century and commissioned by the wealthy.

In Varaha Avatara, Vishnu takes on the form of a boar or varaha, his 3rd of 10 principal avatars, to save Bhudevi, the earth goddess, from the clutches of a demon deep in the ocean. Vishnu then divides the earth into seven continents. 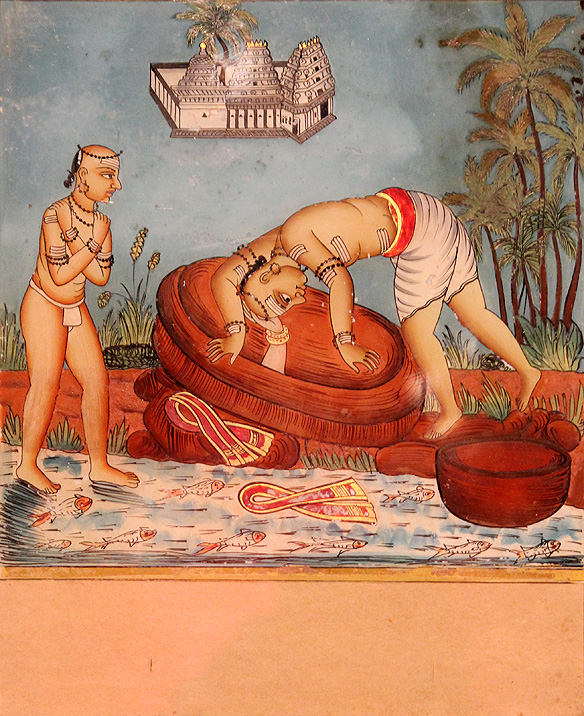 Tirukkurippu Thondar Nayanar, Glass painting
Another exquisite glass painting, this recounts the legend of when Tirukkurippu starts to beat his head because he could not meet his own expectations. Shiva intervenes and puts out his hand to soften the blows. 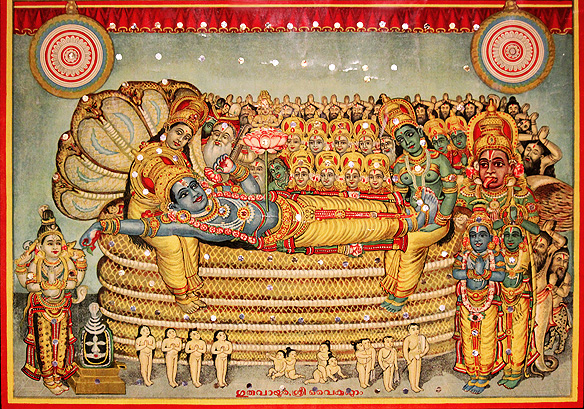 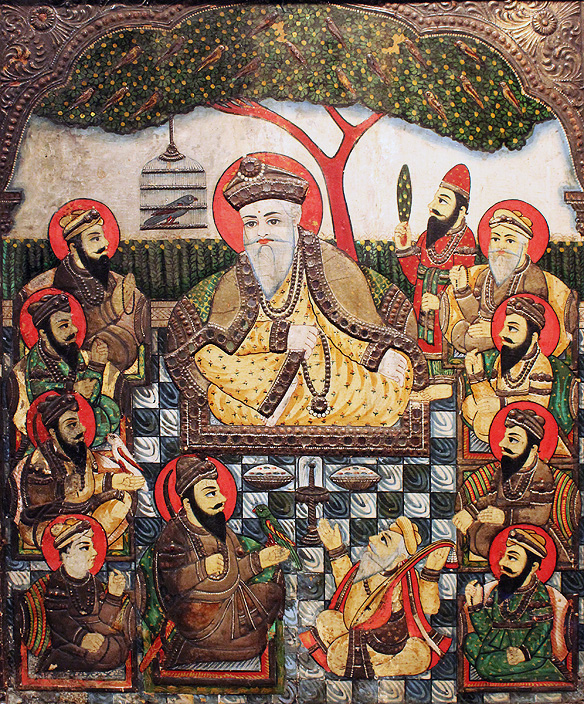 Guru Nanak with the other Sikh gurus [1931]
One of India’s most famous works of art, it depicts Guru Nanak [1469 – 1539] and the nine gurus who followed him, seated beneath a tree, along with Guru Nanak’s companions Bala waving a morchchal and Mardana singing in the foreground.

Three Dimensions of Divinity: Thanjavur Art Revealed is on display at the Chhatrapati Shivaji Maharaj Vastu Sangrahalaya [CSMVS] in Fort, Mumbai from 11 January to 30 June, 2022, 10.15 am to 6.00 pm. This exhibition is supported by Citi-India under the aegis of ConservArte: Citi-CSMVS Art Conservation Project.

Unless otherwise specified, the paintings are from the city of Thanjavur.

[All photographs have been taken by myself with the kind permission of CSMVS.]

Note:
You may also like to read the following posts on Mysore and Thanjavur.
– Once upon a day in Mysore: A one day itinerary of South India’s royal city
– Palaces of Madurai and Thanjavur, a peek into Tamil Nadu’s 17th Century royal lives
– The UNESCO-listed ‘Great Living Chola Temples’ of Tamil Nadu