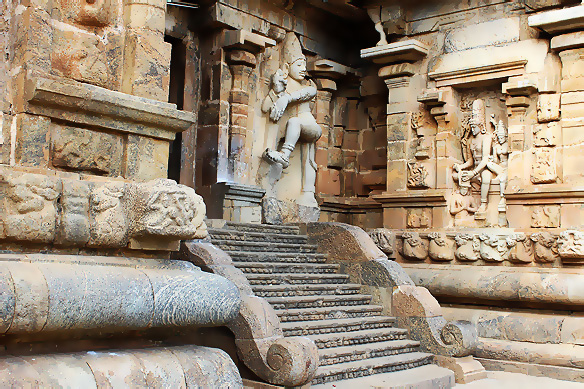 The lady next to me, wrapped in a fuchsia pink saree and fragrant white jasmine flowers tucked into her plait, gently tugged her ears and patted her cheeks repeatedly. This was accompanied with murmured mantras under her breath. There was absolute love and wonder in her eyes as she stared at the gigantic lingam in the ancient sanctuary in front of us. I turned around and lo behold, everyone around me was doing exactly the same!

So as not to look downright ignorant or disturb the others, I asked the busy priest in hushed tones what the gesticulations meant. He replied with a bemused smile and booming voice, “They are praying.”

Nothing has changed in the temple towns in Tamil Nadu. Neither the rituals, mantras, towering granite edifices, or the hand gestures. A thousand years ago when the Brihadisvara Temple in Thanjavur was built by King Rajaraja Chola I, the devotees most likely stood just like this, pulling their ears and tapping their faces. Every cell of their beings focussed on the lingam, and through it on Brahman, the universal fundamental Hindu truth.

Though the Tamil Chola dynasty ruled the scorching hot Deccan plateau from the 3rd Century BC till the 13th Century AD, it was the period between 848 – 1279 AD when it flourished and fully came into its own to form an empire.

Rajaraja Chola I and his successors Rajendra Chola I and Rajadhiraja Chola turned the dynasty into an economic, cultural, and military powerhouse. The borders were expanded right up to the Ganges river in the north, Sri Lanka and the Maldives in the south, and to Malaysia and Indonesia in the south-east. 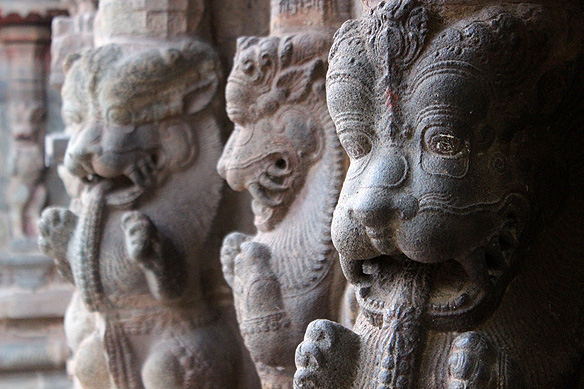 Literature, the Chola bronzes, and Dravidian temple architecture got an extra boost. Around 2,300 temples were built throughout the empire during Chola rule. Three of these temples, on the banks of the Cauvery [Kaveri in Tamil] River, have found their way to the UNESCO list of heritage sites.

Referred to as the Great Living Chola Temples, the millennia-old Airavatesvara, Gangaikondacholapuram, and Brihadisvara Temples dedicated to Shiva are termed ‘Living’ because in all three temples, worship and rituals are carried out unabated to this day. These edifices, which reflect the highpoint of Dravidian temple architecture wherein colossal scale and miniscule detail create an intoxicating combination, are not monuments or museums. They are part of everyday Tamil life. And always have been.

For the uninitiated, such as myself before I explored Tamil Nadu, Dravidian temple architecture is marked with porches or mandapas leading to the sanctum, gate-towers or gopuras punctuating the cardinal directions of the quadrangular enclosures, and multi-purpose pillared halls called chawadis. In the Living Chola Temples, one gets to appreciate this style at its absolute finest.

The only glitch is the three temples are separated by miles in-between often leading to travellers visiting only the most renowned and profusely written about of the three: Brihadisvara Temple in Thanjavur. But that is sacrilege.

Take your time, settle down comfy, and do explore all three. And till you can in person, here’s my post on one of India’s most famous World Heritage Sites. Happy reading. 😊

[Note: You could choose to explore the three temples in any random order, or from the biggest and oldest to the smallest and newest, or vice versa. I chose the last option and may I suggest you do so too.] 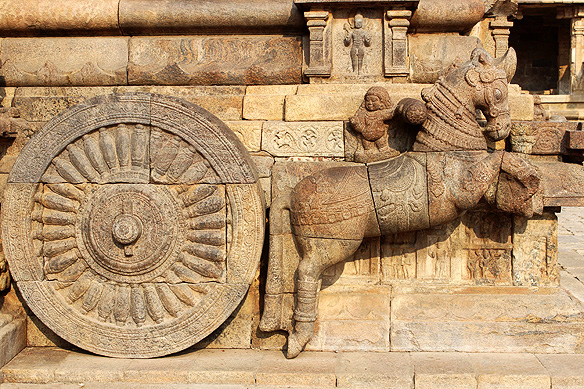 Intimate and delicate, Airavatesvara Temple in Darasuram near Kumbakonam is steeped in mythology and filled with exquisite sculptures. It was also my favourite of the three UNESCO listed Chola temples. Perhaps it was the timing. I visited it in the late afternoon when it was bathed in the golden afternoon sun.

According to legend, somewhere in antiquity, the sage Durvasa cursed Indra’s [the king of gods] mythical white elephant for being disrespectful. When the poor elephant, now ugly and discoloured, bathed in the temple’s holy waters, voila! the curse was removed and he was spotless and beautiful again. In gratitude, Airavata worshipped Shiva in the temple, and since then the place has been named after him.

The Airavatesvara Temple is a karakkoil or chariot temple fashioned after the temple chariots used for processions in festivals. Don’t miss the horses and chariot wheels over which the temple mandapa rests and medallions carved with gay dancing women and drummers on the pillars inside. Legends from the Shaivite Bhakti movement along with sculptures of Vedic and Puranic deities fill wall niches, both inside and outside.

When Rajaraja Chola II built the temple in the 12th Century, it comprised of seven quadrangles connected by seven streets. All that is left now is the innermost courtyard and main temple. Next to it, in a separate enclosure, is the delightful shrine to Amman, Shiva’s consort, called the Periya Nayaki Amman temple and worth a leisurely stroll.

Travel tips: 1) Visit the temple in the late afternoon for a truly atmospheric experience. 2) The ceiling panels in the north-east corner shrine has interesting zodiac symbols. 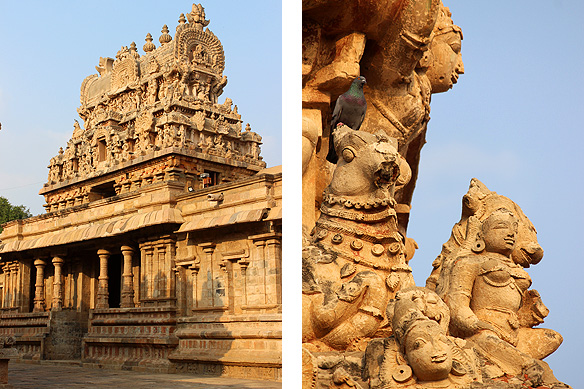 Airavatesvara Temple’s eastern gopura topped with its bevy of deities welcomes both the traveller and pilgrim to the 900-year-old courtyard and sanctum. 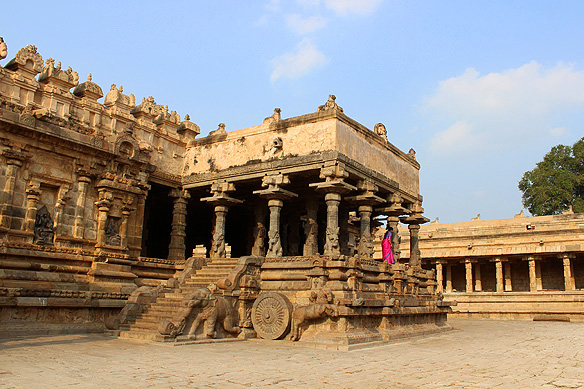 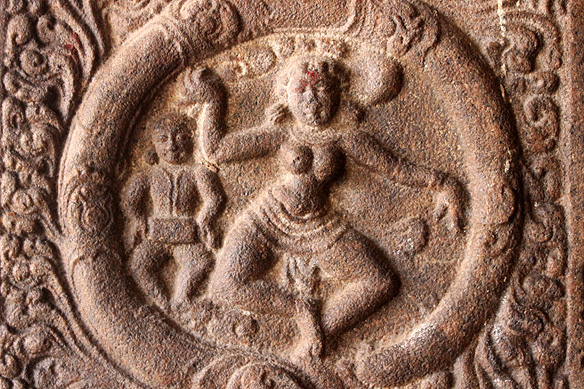 Dance like no one is watching! Scores of medallions such as the above decorate the pillars in the mandapa. 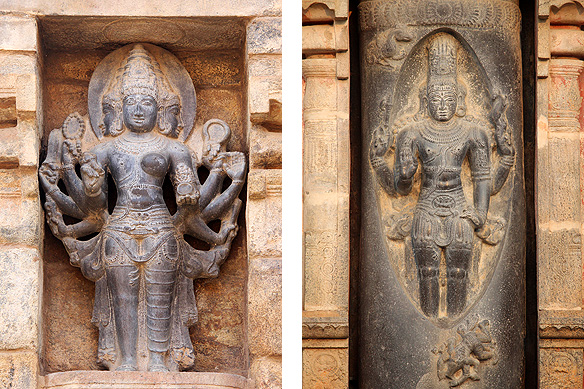 Effigies of Shiva in his various manifestations embellish the outer niches. Left: Ardhanarishvara—Lord, who is half woman; Right: Lingodbhava, Shiva inside a lingam with Brahma as a swan at the top and Vishnu as a boar at the bottom. 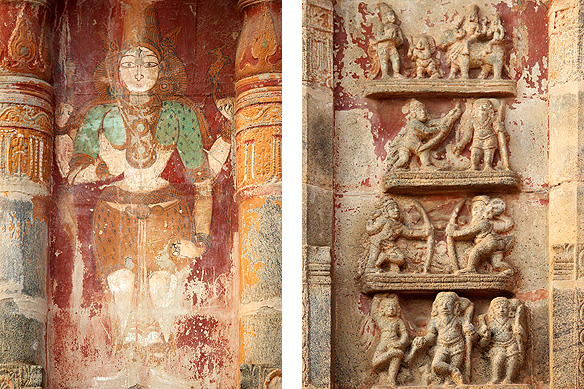 Large-sized sculptures of deities are not the only spiritual and aesthetic decorations in Chola temples. Left: A fresco peeps out between a pair of pillars; Right: Scenes from Hindu mythology. 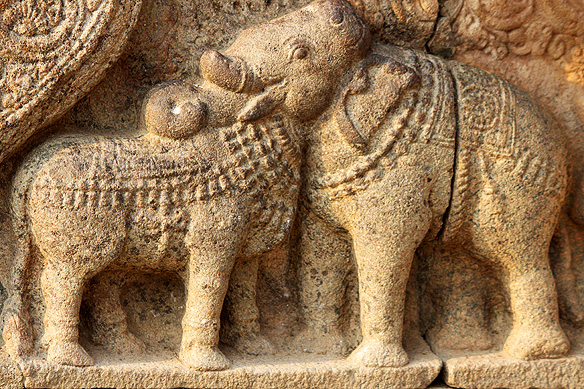 Optical illusion at its best. Is that a bull? Or is it an elephant? The beauty of Chola temples’ lies in their details … 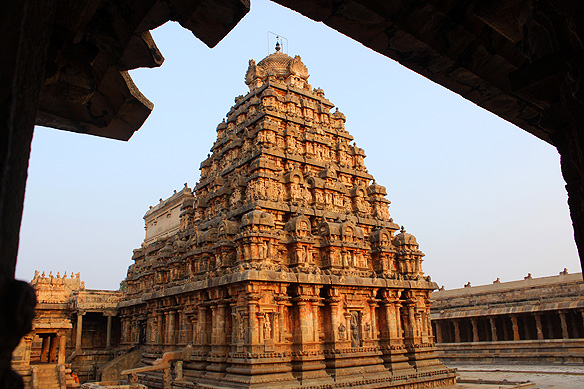 … and in their majestic scale. Airavatesvara Temple’s stone vimana rises to a height of 24 metres.

Gangaikondacholapuram Temple, a celebration of Chola victory over the Gangetic plains 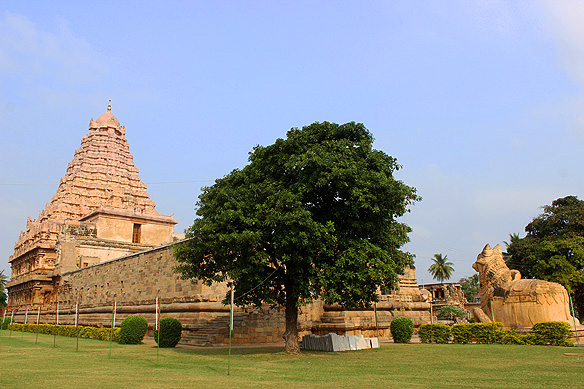 What’s in a name? Lots. Especially if it is called Gangaikondacholapuram. I know, it is a mouthful! The phrase literally means “The town of the Chola who defeated [the kings near] Ganga.”

This historical feat was achieved by Rajendra Chola I, son of Rajaraja Chola I, in 1019 AD. To celebrate his victory, Rajendra Chola I titled himself Gangaikonda Cholan [the one who conquered the Ganga] and created a brand-new capital city: Gangaikondacholapuram. Built in 1025 AD, the city had a monumental granite temple as its centrepiece by the banks of a man-made lake. Such was its splendour it continued to serve as the Chola capital for the next 250 years.

Rajendra Chola I’s victory over the Gangetic plains is immortalized in a spectacular relief sculpture depicting Shiva, accompanied with Parvati, garlanding the ruler in person. After all, as per Hindu mythology the River Ganga was released from Shiva’s matted locks to help Hindus achieve salvation. It is a stunning work of art guaranteed to give you goose bumps with its amalgamation of history, mythology, and fine art.

Compared to Airavatesvara Temple, the Gangaikondacholapuram Temple is a century older and its vimana 31 metres higher [at 55 metres high]. Over 50 relief sculptures of deities across the Hindu pantheon decorate its walls punctuated with inscriptions. Two sculptural masterpieces to watch out for, apart from Shiva garlanding Rajendra Chola I, are the effigies of Nataraja and Saraswati.

Like most of history, the city has turned to dust and rubble as well. But the temple still stands in almost full glory—the gopuram at the entrance has collapsed. But that is a small loss compared to the magnificence that lies within.

Travel tips: 1) The mandapa pillars have fascinating reliefs of musicians. 2) Sculpture panel of Shiva garlanding Rajendra Chola I is at the temple’s northern entrance. 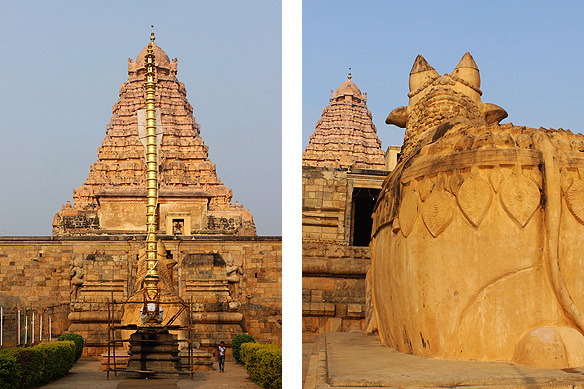 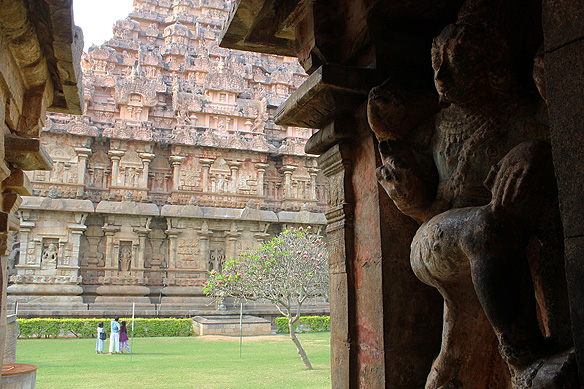 At 55 metres high, the temple’s 9-storey vimana is only 8 metres smaller than the Brihadisvara Temple at Thanjavur. 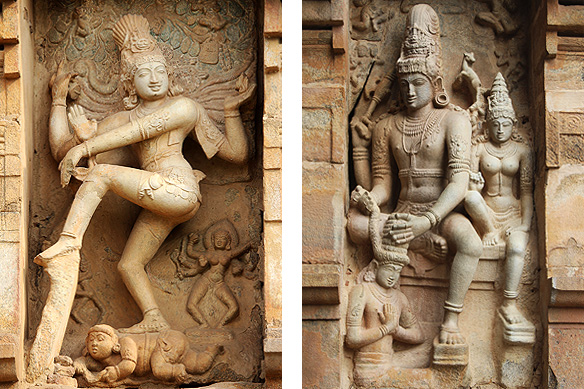 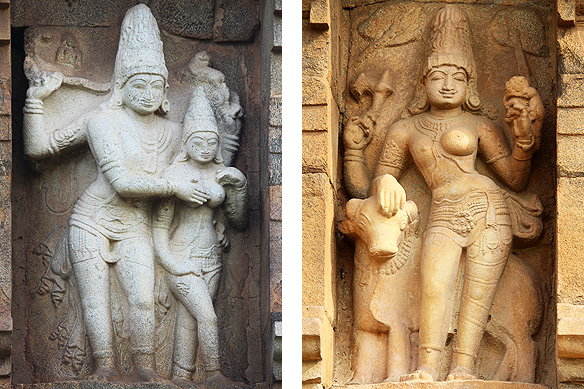 King Rajendra Chola I’s ode to Shiva. Clockwise from top left: Shiva as Nataraja, surrounded with dancing deities; Shiva garlanding him; Ardhanarishvara, Shiva and Parvati as one; and Shiva as Gangadhara appeasing Devi. 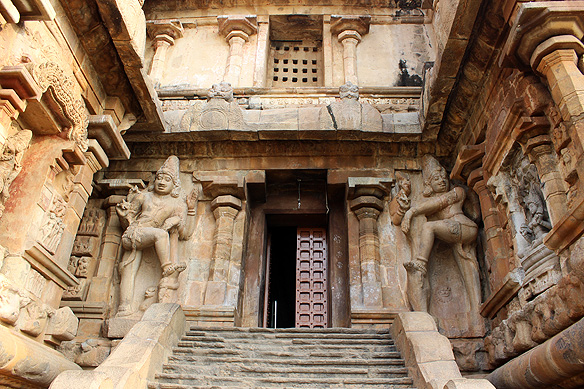 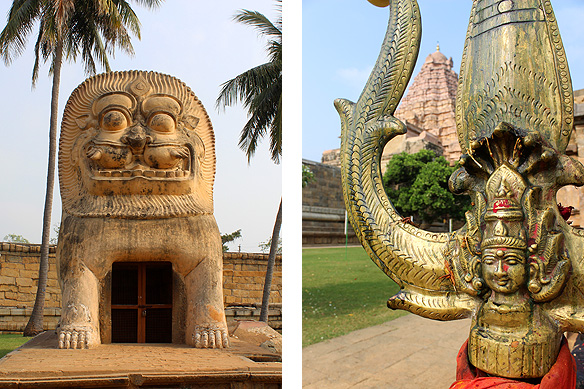 Left: Lion-shaped entrance to the water well, a 19th Century addition; Right: Shiva’s trishul guards one of the small shrines inside the enclosure. 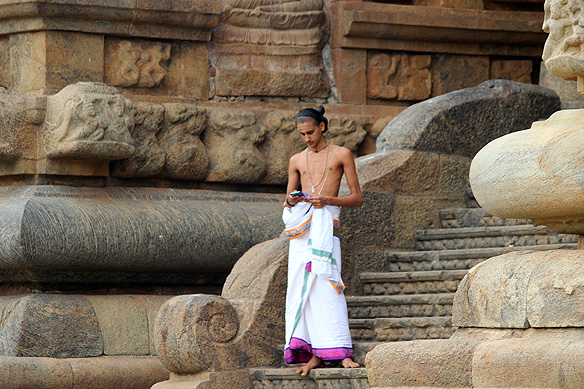 Priests still carry out thousand-year-old daily rituals inside the temple. In July 2014, the temple was the site of much pomp and pageantry as part of the millennium celebrations of Rajendra Chola I’s coronation. His soul must have been mighty pleased. 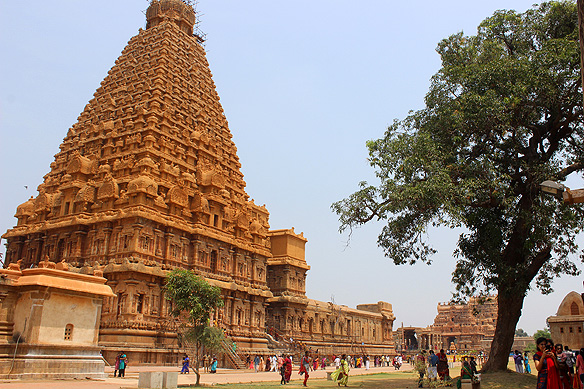 Universally accepted as Chola empire’s architectural magnum opus, the Brihadisvara Temple in Thanjavur is the oldest and largest temple in the ‘Great Living Chola Temples’ collection. It is where Chola art and architecture blossomed to its full brilliance.

It is also the most crowded and the busiest of the three temples, filled to the brim with tourists and pilgrims alike. Everyone eager to have a look at the 63.4-metre, 16-storey high vimana made of carved granite blocks piled on top of each other over a garba griha in which rests an 8.7-metre-high lingam, one of the largest lingams in the country.

What makes Brihadisvara [meaning ‘Big Shiva’] Temple even more mind-boggling is that the Dravidian structure does not have any foundations. These heavy stones were placed directly over the ground, over a thousand years ago. And nothing has moved or fallen since.

Credit for this architectural gem goes to the Tamil Chola King Rajaraja Chola I who commissioned it in 1003 – 1010 AD. He did what no one else had dared to do before. Build a temple with stones that reached to the skies. An inscription dated 1011 AD states over 600 people were once employed by the temple. The bronze Natarajas of Thanjavur were commissioned right here.

Though a Shiva temple, the sculptures, frescoes, and inscriptions which decorate the walls in geometric precision make no distinction between Shaivism, Vaishnavism and Shaktism. Every deity and every sect are celebrated here. A gentle reminder of the essence of Hinduism—There is god in every living being, and there is god in every supreme being. ❤

Travel tips: 1) Beautiful Chola and Nayaka-era frescoes line the quadrangle’s corridor walls. 2) Priests hand a small portion of vibhuti [sacred ash] to each pilgrim. You could either collect it in a little envelop to take home or place it by a pillar or effigy. 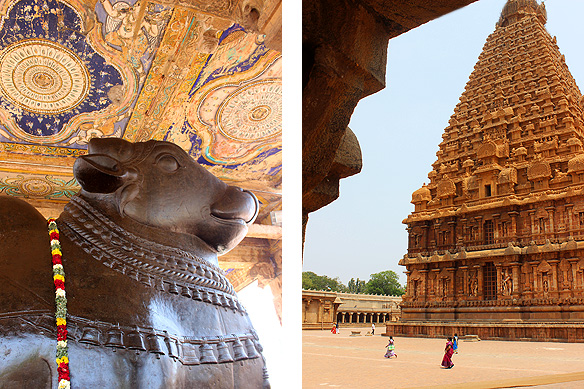 Brihadisvara Temple: Nayaka-era [1529 – 1736] monolith Nandi at the eastern end and the towering 63.4-metre-high vimana at the western end. 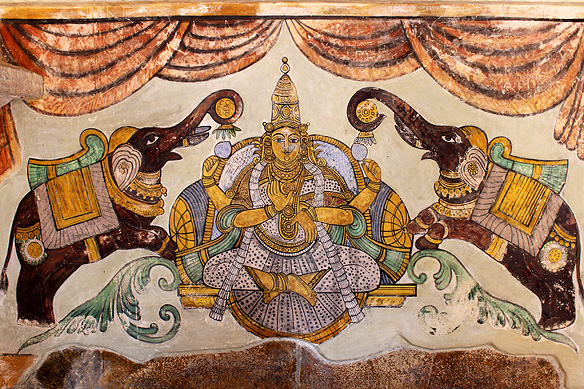 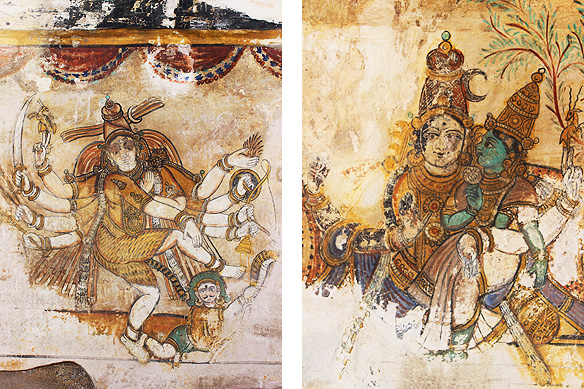 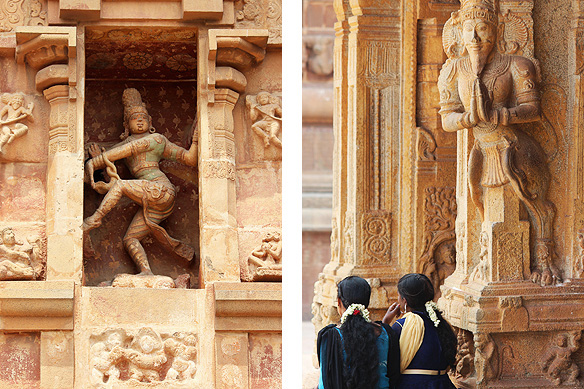 What is a Chola temple without its sculpture? Left: Nataraja in a wall niche. 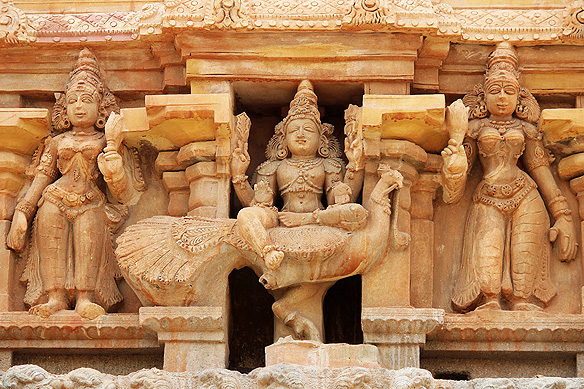 And here’s Kartikeya, Shiva and Parvati’s elder son, a popular deity in South India who also goes by the name Murugan. 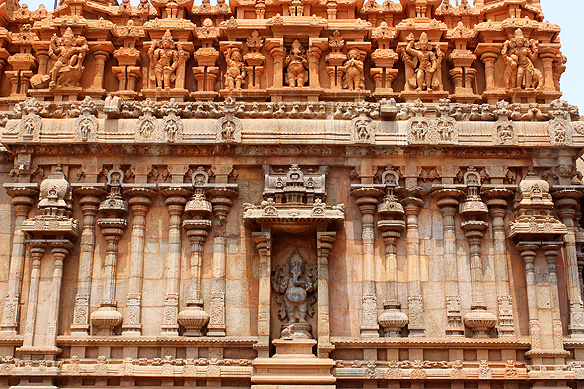 Shiva and Parvati’s other son, Ganapati, remover of obstacles and god of new beginnings in the central niches. 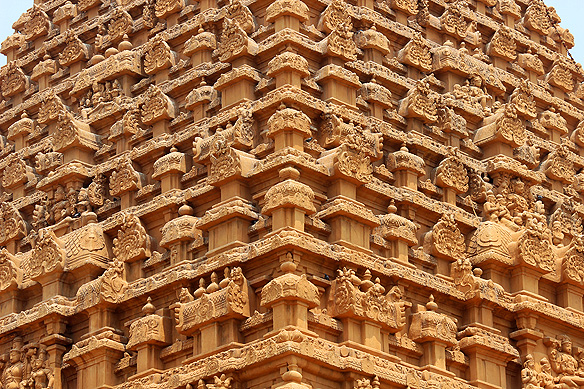 [Note: This blog post is part of a series from my solo and independent travel to the temple towns of Tamil Nadu over 7 days in the first week of March 2020. To read more posts on Tamil Nadu, click here.]