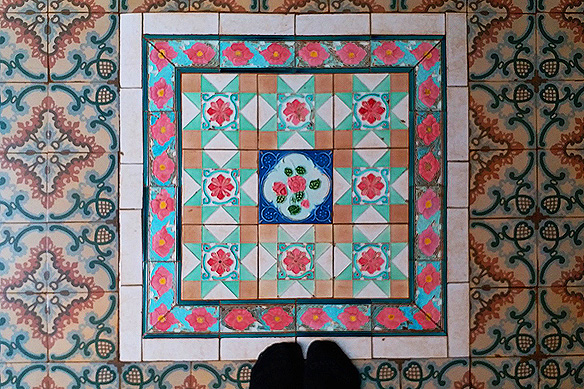 India is full of surprises. Do you agree?

There are the usual suspects in India’s travel mix: Temples, forts, palaces, beaches, the Himalayas, and wildlife reserves. Throw in some yummy food, colourful festivals and yoga, and one may well be duped into believing—India, aah! Been there, done that.

Then, almost out of the blue, is a collection of around 75 sleepy villages in southern Tamil Nadu filled with uber-rich villagers’ mansions dating from the 1850s to 1940. Often filled with a hundred-odd rooms, they span across two streets in the neat grid plans which swathe the villages.

On their walls are massive mahogany framed mirrors all the way from Belgium while the floors are decorated with dainty English ceramic tiles spangled with roses, hand-made Athangudi tiles and Italian marble. Smooth Burmese teak pillars hold up ceilings from which enormous sparkling Venetian Murano glass chandeliers dangle.

I say ‘almost’ out of the blue, because the presence of these mansions is not random, even if they seem to be so. They belong to a rural community of zamindars or landowners called Nattukottai Chettiars who climbed the socio-economic ladder over the centuries and ended up as seasoned international billionaire mercantile bankers and traders under regional kings and the British Raj. Nattukottai, by the way, means country-fort, a reference to their grand fortified houses in the countryside.

Business and financial acumen came naturally to the Chettiars. As they travelled across south-east Asia and Europe, and made more and more money, they invested in family homes back in their villages and called the region Chettinad. However, things change. World War II took place. Countries became independent. Geo-political equations altered. And, thus, for the Chettiars, an era came to an end.

Some decided to stay on in their ancestral homes irrespective of the costs incurred in maintenance. These descendants have opened their houses to the likes of us at a minimal fee. The families, now living in Chennai or scattered across the country and globe, still gather together in them for weddings and festivals. Others have converted their homes into plush hotels. Whilst most, are just simply crumbling away. Tentatively listed on the UNESCO World Heritage Site list, there are over 10,000 mansions still standing; way less than the original number. 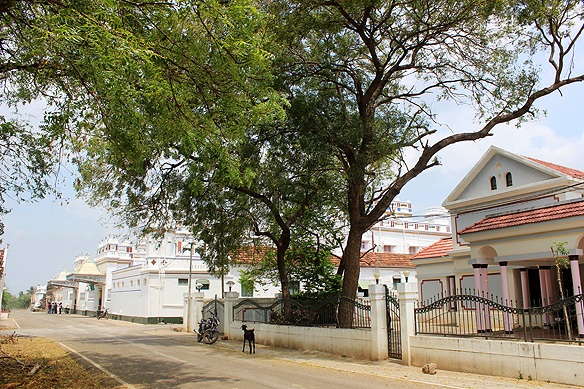 It took me two hours from Madurai, on a glorious Spring day this March, to reach the principal village of Chettinad: Kanadukathan.

A village with hardly a soul and remnants of the over-the-top, incongruously wealthy lifestyle of the Chettiars. I managed to visit quite a few houses, purely by trial and error and poking my way around. It soon dawned on me that they all followed the same architectural plan. The only difference being the level of maintenance and quality of embellishments.

Every home had a string of courtyards lined up in an exact straight line, surrounded by residential and store rooms, with a showpiece ceremonial hall in the front and a rudimentary kitchen at the back. Rain water harvesting ensured the large families were never short of water for bathing and cooking. A mixture of egg white and lime gave the walls that extra sparkling sheen. A porch topped with Vaishnavite deities guarded the entrance.

But, as I soon found out, Chettinad was not just rows upon rows of colossal historical mansions. There was more. Quite a bit more.

No trip to this triangular patch under the sun is complete without a visit to a workshop which keeps the traditional craft of Athangudi tile-making, using glass and local sand, still relevant and alive. And then there is the abhishek ceremony in the evening at Pillaiyarpatti Temple [one of the nine clan temples] dedicated to Ganesh which is guaranteed to give you goose bumps. It is one of the most dramatic and magical Hindu religious ceremonies I have ever attended in my travels.

Last, and not least, a meal of spicy, aromatic Chettinad chicken and steamed rice is mandatory when in Chettinad. It will have you gulping down your drink and licking your fingers, both at the same time.

But, first things first, let me take you on a virtual tour of Chettinad’s fantastical heritage homes. Come along with me.

I came upon this absolute gem purely by chance. On seeing a door slightly ajar, I called out if I could have a quick dekko. The caretaker ushered me inside and what a delightful place it turned out to be. Built in 1870, the V.VR. House is one of the oldest mansions in Chettinad. Left: Egg-plastered walls; Right: That’s me in the central courtyard. 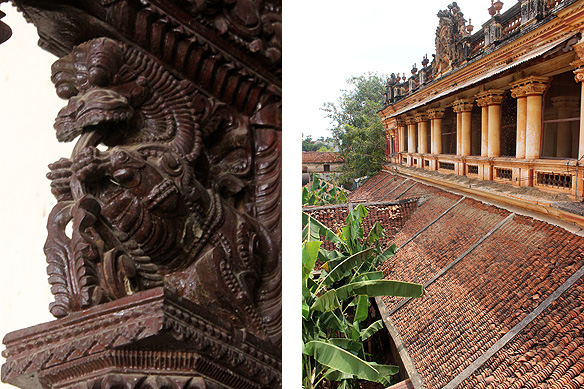 Left: Intricately carved Burmese teak wood carvings on the columns at V.VR. House; Right: View of V.VR. House from the mansion next door. 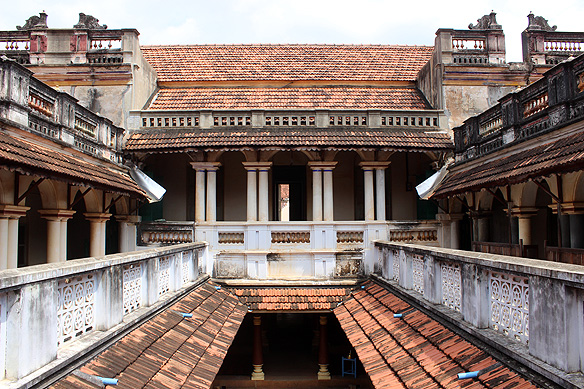 S.A.S.RM. House, next to V.VR. House, was my second stop. Descendants of the S.A.S. family still live here. In Chettinad architecture, the upper storey, as a rule, contains the bedrooms. Rooms in the ground floor, lined around the courtyard, serve as storage and living quarters. 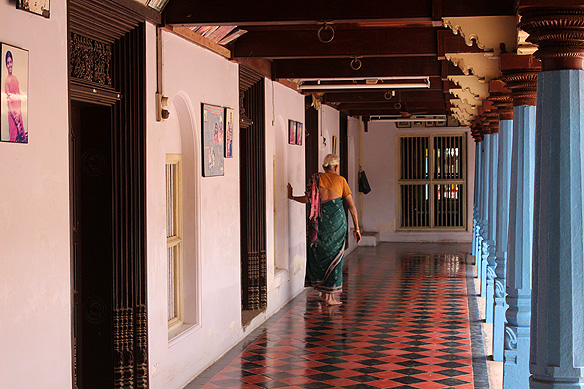 That’s the lady of the house and fifth-generation heiress of S.A.S.RM. House. 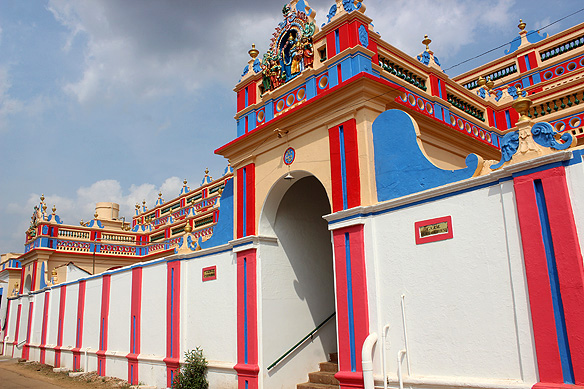 A little further down and across the road is C.V.RM. Heritage House, Kanadukathan’s most famous heritage house. 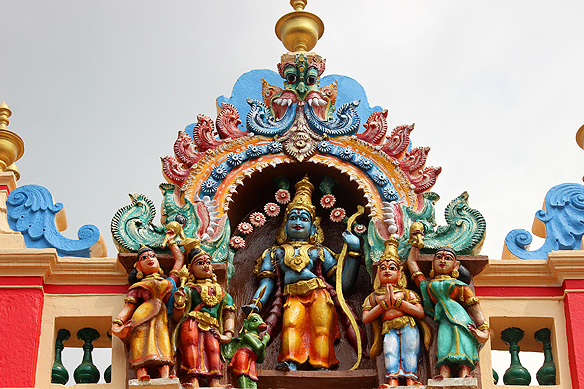 Lord Rama, his wife Sita, brother Laxman, and commander of the monkey army, Hanuman from the epic Ramayana grace the facade of its porch.

Ever seen a room more photogenic? Known as the thinnai or outdoor veranda, guests were received here. 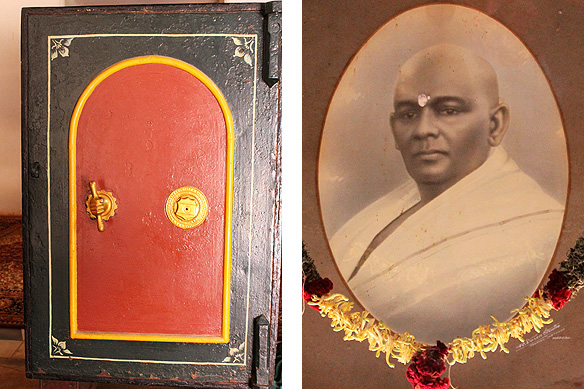 Left: The safe; Right: C.V.RM. Venkatachalam Chettiar built his opulent mansion more than a 100 years ago. He owned three rice mills and used to be a money-lender in Burma. His grandson now lives in the house. 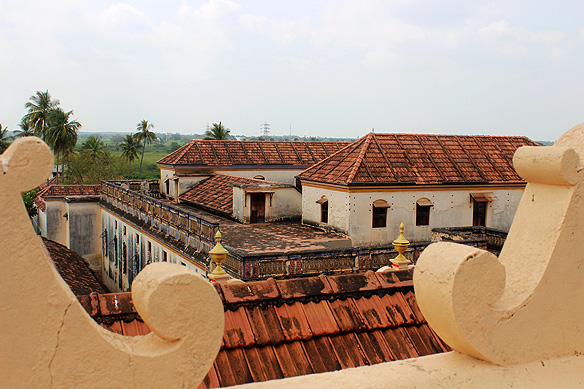 View from the rooftop. That, by the way, is the neighbour’s house. 😀 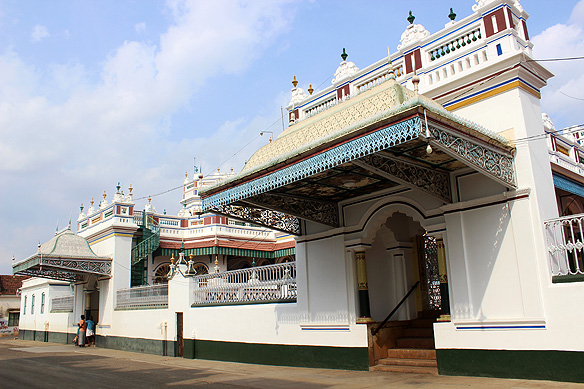 Raja Palace in the heart of the town. Not that the residents of this palatial abode ever ruled Chettinad. Just that they were so darned wealthy they were called Raja sahib by everyone.

It’s a twin house for two brothers, one of which was the founder of Indian Bank and maternal grandfather of the former Finance Minister of India, P. Chidambaram. The families only visit on key occasions. Rest of the time, a bevy of servants keep the place in immaculate condition. Note: Entry is prohibited, unless you have connections.

Close to Raja Palace is this lovely crumbling edifice. Notice the pair of lions and goddess Lakshmi on the facade. 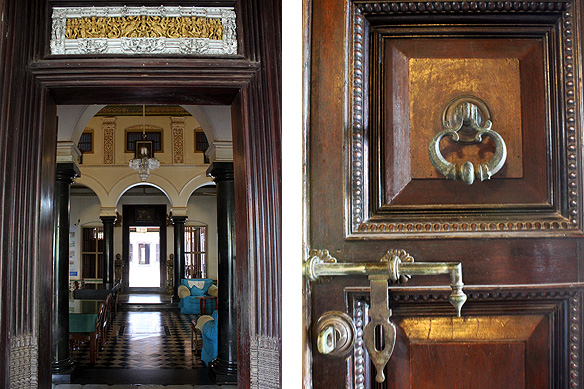 Chettinadu Mansion is another one of those I just stumbled upon, this time as I followed a brightly painted bullock cart. Built in 1902, it prides itself on being ‘the oldest unaltered heritage resort in Chettinad’.

A sixth generation grand-daughter has painstakingly preserved the family heirlooms, photographs, and architecture of the hotel.

Looks familiar? If you’ve ever seen pictures of the Chettinad palaces, they most likely were of this one: Athangudi Palace in Athangudi village, 8 kilometres away from Kanadukathan.

Chequered Athangudi floor tiles, an exquisitely carved and painted wooden ceiling, and ethereal frescoes made it a popular choice for film shoots. Though the film angle, I was told, was now a thing of the past.

The magnificent mansion is maintained by the family [who still live in the right wing], and dates back to the early-20th Century.

Most Chettinad mansions, as mentioned above in the post, have colourful handmade Athangudi tiles on their floors: a 100-year-old indigenous craft in which dyed local sand is poured into a glass-backed mould …

… to give this result! If you would like to buy these tiles or know more about them, do have a look here.

I hope you enjoyed the above virtual tour. To come back to the claim, “what is Chettinad without its aromatic delish food,” I would like to share a recipe of the mouth-watering Chettinad chicken, a recipe that I personally am fond of, by chef Varun Inamdar.

Wishing you happy travels and meals, on the road less travelled, soon. ❤

[Note: This blog post is part of a series from my solo and independent travel to the temple towns of Tamil Nadu over 7 days in the first week of March 2020. To read more posts on Tamil Nadu, click here.]