If you were ever of the opinion that Buddhist art was all about asceticism and restraint, think again. The caves at Ajanta, in the Indian state of Maharashtra, are a lavish statement to the contrary as I discovered earlier this month on a five-day trip exploring the region in and around Aurangabad. But then, isn’t that what travel is meant to do? Break perceptions. 🙂

The mix of spiritual with secular, ordinary with sublime are common traits in Indian aesthetics. Why then should Buddhist art have been any different!

Using mineral pigments, the ancient artists, confident and capable in their craft in an era some 1,500 years ago painted jewel-like fresco-secco [dry fresco] murals in Ajanta to narrate stories of Buddha’s life and his past lives [Jataka tales].

The surface was first prepared with a layer of mud, cow-dung and paddy husk, followed by a thin coat of lime wash. On this they drew an outline of the composition, and lastly filled these outlines with their palettes of reds, greens, ochres, and blues. Their purpose was simple. To inspire devotees to follow in Buddha’s footsteps.

There has been much speculation on how did the artists manage to achieve exorbitant levels of detail in the absence of any significant light inside the caves. Did they burn torches [if yes, there should be remnants of soot, which there isn’t] or did they fill the sunken floors with water which bounced off light? Though we may never know the truth, every time you flash a torch inside the dark recesses be prepared for it to reveal exquisite detailing: a raised eyebrow, a smothered laugh, a wilting flower, each orb distinct in the strings of pearls wound around a neck.

What makes these paintings even more magnificent is their surreal location—they cover the dim innards of “caves.” Not natural caves but caves excavated out of the Indian Deccan plateau’s living basalt rock with hammer and chisel.

In Ajanta’s case, they are inside a 76-metre-high horseshoe-shaped cliff lining the Waghora river gorge. The current footpath leading to the caves is a 1920s innovation. The monks used to climb up steep perpendicular steps cut into the cliffs from their boats anchored in the river below.

Nandalal Bose and Amrita Sher-Gil, India’s foremost modern artists, found their inspiration in these paintings. Tibetan and Sri Lankan religious art is based on the Ajanta caves’ art.

Is it any wonder then that the Ajanta caves, named after nearby Ajantha village, was the first Indian site to be awarded UNESCO World Heritage Site status in 1983 and is one of the country’s most popular and famous attractions?

After all, they are the largest collection of surviving examples of ancient Buddhist paintings in the country, replete with Classical glory and records of everyday life in historical India. There are scenes galore of simple domesticity, royal court life, bustling markets, vibrant flowers, swaying forests, and even chirping birds and stomping animals. The geographic setting adds that extra oomph and aah.

Its collection of works of art, each more remarkable than the other was, however, not created in a continuous stretch but in two batches separated by a gap of almost 400 years.

The first set of caves were carved out under the patronage of the Hindu Satavahana dynasty between the 2nd Century BC and 1st Century AD. They belong to the Hinayana or “lesser vehicle” sect and are characterized by aniconic representations, wherein motifs such as the wheel, footsteps, and stupa are used to depict Buddha.

For 20 short years between 460 – 480 AD during India’s Golden epoch, Ajanta blossomed again, this time under the Vakataka dynasty and taking on the mantle of the Mahayana or “greater vehicle”. Buddha now took on the human form, robed with hand mudras, an ushnisha [protuberance on his head] and elongated ears. Most of the paintings in Ajanta are from this second period.

Even though it is the paintings which are Ajanta’s prized treasures, its sculptures, albeit only in a few caves and in the forefront because of the absence of paintings in them, are no less striking. Stories from Buddha’s life are the main theme in these, with Cave 26 the finest of the lot. A visit to it and nearby Cave 24 is enough to make you gasp at their magnificence.

Known as varshavasas, the Ajanta caves were used as meditation retreats and prayer halls by the Buddhist monks in the monsoon season. Whilst rain, wind, and cloud battered the Western Ghats in Maharashtra, the monks, along with pilgrims, travellers, and merchants found refuge inside its jewelled dark walls.

A total of 30 caves were excavated at Ajanta. Five of these were chaityagrihas or prayer halls [Cave 9, 10, 19, 26 and 29] apsidal in shape, with rows of columns and a stupa; 25 were viharas or monasteries, usually square, and lined with cells for the monks. No two were alike. The differences at times obvious, at times subtle.

Funding for the caves came from the likes of Hindu King Upendragupta and Harisena’s Prime Minister Varahadeva and the Asmaka monk Buddhabhadra, along with courtiers and wealthy merchants keen to buy religious merit.

When Harisena died in 480 AD funding for the caves came to a halt as well. Work was abandoned; the pilgrims and monks started moving to Ellora. Ajanta slowly became entangled in forest cover, forgotten to the world and time.

That is till April 1819 when John Smith, a British officer, “discovered” Cave 10 on a tiger hunting expedition. He promptly carved his name and date on a Bodhisattva painting, and opened its doors to Oriental study and European tourists.

Though it was the month of March when I visited, and the cliff and gorge lay parched under the hot Indian sun, it was not difficult for me to picture the chants and shuffling of the faithful as the rain poured outside, just as it had all those centuries ago.

My favourite caves? Which else but Cave 1, 2, 10, and 26. But by no means let this be interpreted as a hint that you could skip the others. Please visit them all. The complete and incomplete ones. The lavishly decorated and basic ones. At least all those that are open to the public. For it is in their collective that one can understand the essence of Ajanta; it is when one explores them all can one savour the magic that is Ajanta. ❤ 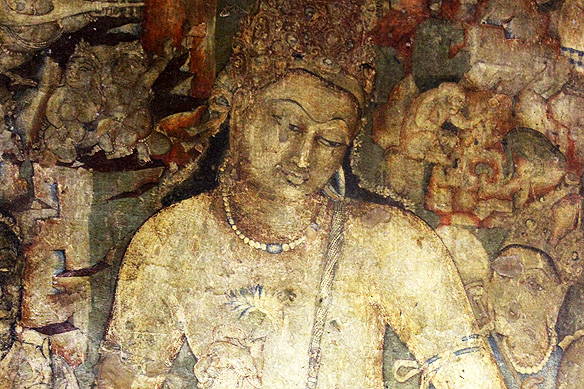 The centrepiece of Ajanta: Cave 1. The most beautiful cave in the entire series, it contains two world art masterpieces: Padmapani [top] and Vajrapani [right] painted on either side of the main sanctum.

Ajanta’s rock-cut caves were used as meditation and prayer retreats by the monks in the Indian monsoon months, from 2nd Century BC to 5th Century AD.

Covered to the brim with paintings on its ceilings, walls and columns, Cave 2, a viraha [monastery] is a riot of colour. It is believed it was commissioned by a woman because of its feminine themes.

These paintings in the oldest cave in Ajanta, Cave 10, date back to the 2nd Century BC and 4th Century AD. A chaityagriha, it belongs to the Hinayana sect.

Though most of the paintings have now faded in Cave 16, it once held prime position in the site and was sponsored by Varahadeva, Prime Minister of Vakataka king Harisena, along with Cave 17 and 26. It is recognized by the two elephants at its entrance and “loving couples” holding up the roof inside.

Cave 17 features some of the best preserved and most famous paintings of Ajanta. Using Jataka tales [stories of the former lives of Buddha] to extoll human virtues, they are a fantastical concoction of colour, realism, and lavishness. Each character in the narratives bursts with life and emotion.

Vessantara Jataka, scene from the story of the last but one reincarnation of Buddha, proclaims the virtues of generosity. [Cave 17]

Chaddanta Jataka, story of the six-tusked elephant who gave away his tusks, Cave 17. The Jataka stories in Ajanta are not linear compositions but emanate in all directions from a central scene. 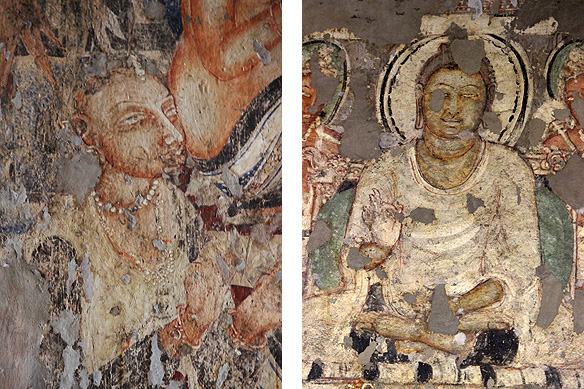 The cave paintings in Ajanta reached a high degree of sophistication by its later years, becoming more stylized in form and line. Compare those in Cave 21 [left] with Cave 19 [right] and you will see what I mean. The one on the right is older.

A medallion decoration on a pillar in an incomplete monastery, Cave 24.

Of the 30 caves at Ajanta, four are chaityagrihas or prayer halls typified with colonnades and a stupa at the rear end. The above at Cave 26 is one of the finest with Buddha seated under a pavilion in the pralambha-pada [hanging legs] pose.

Beautiful art everywhere! Though overshadowed, and hence more well-known for its paintings, the sculptures in the Ajanta caves are just as spectacular, coming to the forefront in Cave 26 [above], 24, 19 and 16.

One of Ajanta caves most poignant sculptures is this 9-metre long Parinirvana Buddha, hidden behind a colonnade in Cave 26. Below him are a string of mourning followers; above, joyous celestial beings. A befitting end to the series.

Zoom out and it strikes you how these “caves” are in fact excavated out of the face of the rock. A mammoth task considering it was all done by hammer and chisel over 1,500 years ago. [Cave 26]

But you need to zoom out completely, go onto the other side, to comprehend the enormity of the undertaken task. See those little slits in the basalt rock? They are the Ajanta caves carved out of the horseshoe-shaped cliff rising above the Waghora river, deep in the wilderness of the Deccan Plateau.

14 thoughts on “the painted and sculpted caves of ajanta”