An opiumate and weak general [as popular history would like us to believe] or a gentle ruler determined to regain his lost territories and in fact did. Even if it took him 15 long years in exile racing on horseback through Lahore, Sindh, Rajputana, and Persia.

Were it not for a colossal garden tomb built in his memory by his son, he may well have been forgotten in the dusty pages of time.

This blog post is the story of Indian Mughal history’s most fortunate and unfortunate emperor: Humayun and his enormous resting place in India’s historical capital city, Delhi. Happy exploring! ❤

Squashed between two legendary giants, Humayun was the son of Babur, founder of the Mughal empire, and father of Akbar, the Mughal empire’s greatest ruler. His name literally meant ‘the auspicious one’. Destiny’s child.

He was handsome, charming, gentle and kind, and passionate about astronomy, astrology, and mathematics. But like most wealthy sons of that time, born with a silver spoon in their mouth, he had a fondness for opium, women, and the good life. The perfect prince, Humayun would have been perfectly happy staying one. Major nerve-wrecking responsibilities were not exactly what he coveted for. But fate had other plans.

One fine day, aged merely 23, he fell terribly ill. His father, Babur, who loved him most dearly, called out to the gods and universe to take his life but save his beloved child. The universe listened, and granted him his wish. Humayun got well. Soon after Babur passed away. And hence, Humayun, with much reluctance, became the emperor of Hindustan in 1530, a role he was neither excited about nor equipped for.

The fledgling decentralized empire he’d inherited was weak and shaky. His three half-brothers were a difficult, defiant bunch and a promise he made to his dying father to be good to them, kept his tongue and hands tied. But our young hero tried his best, except that it was not long before early victories made him lax and turn towards pleasures he was hooked on to.

Humayun’s weaknesses and innate indecisiveness were fuel to the ambitions of his competitors, in particular those of a decisive, brave Afghan noble in East India, Sher Khan, later known as Sher Shah Suri. Without much ado, Sher Khan led a series of attacks on Humayun and ousted him out of his own empire, just 10 years into his reign.

Unsupported by his half-brothers and with Sher Khan on his heels, Humayun gathered his family and treasures tight, and started a life on the run. Mounted on horses, he and his entourage sped from Delhi to Lahore to Sindh, and through the unwelcoming, steaming Thar Desert of Rajputana.

Two events softened the blow of these difficult years. In Sindh, Humayun met a lovely Persian damsel called Hamida Banu, some 20 years younger than him, fell madly in love with her, pleaded that she marry him, to which she eventually agreed after many an ‘if’ and ‘but’. Secondly, the two had a son in Umer Kot in Rajputana on 15 October, 1542, who grew on to become Akbar, the Great.

With a one-and-a-half-year-old Akbar in tow, Humayun decided to take refuge with his half-brother Askari who then ruled Kandahar in Afghanistan. Braving bandits in the remote high mountains, he was just about to reach Kandahar when he got the news that his half-brother intended to capture him.

In a dilemma, Humayun made two decisions, albeit in haste, which proved he indeed was ‘the auspicious one’, despite the unending series of misfortunes his life was choc-o-bloc with.

Firstly, he turned to Shah Tahmasp, the Shah of Persia, for help. The Shah, in response, gave him a royal welcome, hosted him as a State guest for 10 long years, and gave him an army of 12,000 cavalry and 300 bodyguards to regain his lost empire when it was time for him to leave.

Secondly, Humayun decided to leave his toddler son with servants at a camp in Southern Afghanistan when he fled to Persia. Humayun’s half-brother Askari came to the camp to capture Humayun, found young Akbar instead, took a liking to the child, took him to his palace, and treated him like his own. This, without his intending to, safeguarded continuity of the Mughal rule. 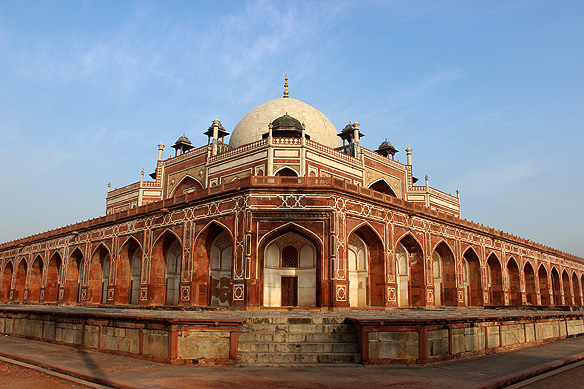 Fast forward to July 1555. Humayun breezes into Delhi with his army and regains Hindustan after a gap of 15 years. His inheritance is back in the family, and this time for some 300 years.

Almost, as if his work was now done, one fine day, not even six months into his second stint as an emperor, his topsy-turvy life ends. He was gazing at the rising Venus from his observatory in Delhi’s Old Fort when he heard the muezzin call. He turned to kneel down for prayer, tripped, fell down the stone stairs, and died three days later.

It was a life larger than the movies, and which his son befittingly felt deserved a tomb, larger than life.

Before I end this fantastical story brimming with unexpected twists and turns, you may have noticed I keep mentioning the tomb was built by Akbar, Humayun’s son.

However, scholars including Prof Glenn Lowry, believe otherwise, claiming it is too large, expensive, and complex a project to be commissioned by a widow. That it has Akbar’s signature style all over it. And most importantly, Bega Begum was in Mecca on Hajj at the time, as per the chronicles. The fact that the UNESCO site agrees it was commissioned by Akbar seals the argument, as far as I am concerned. 🙂

In closing, if Humayun’s own epic life story is not poignant and atypical enough to warrant a visit to his equally extraordinary tomb, here are seven reasons why no visit to Delhi is complete without an early morning spent at the UNESCO listed world heritage site in the company of bird song, and many absolutely unique, quirky anomalies!

Uzbekistan and India. Two disparate nations, yet irrevocably tied in how history was shaped in the latter. The connection goes far before modern borders were put in place, when the region known as Uzbekistan was part of Tamerlane or Timur the Lame’s empire. To the year 1526 to be exact.

That’s when Timur’s great great grandson Babur founded the Mughal empire in India. His descendants, throughout their reign, continued to identify themselves, adamantly and proudly, as Timurids. An identification which made Akbar turn towards Mir Mirak Ghiyas an architect in Bukhara, Timurid architectural principles, and Uzbek glazed tile craftsmanship for his monumental, 47-metre-high ode to his father: Humayun’s Tomb.

Before Akbar commissioned Humayun’s Tomb in memory of his father, there was no Mughal architectural style as such that he could use as a blueprint. All he knew was that he wanted to break away from existing styles, create something new, and draw upon his Timurid ethnicity for it, yet be rooted in India, his family’s present home.

What emerged was a marriage of grandeur, symmetry, a double dome, and the hasht-behisht [eight paradises] floor plan in the edifice and gardens [Timurid] and jharokas, chhatris, and kalash [Hindu] in the detailing.

Built over seven years from 1565 to 1571, Humayun’s Tomb also saw the introduction of raised domes and chamfered corners for better visibility of the ethereal beauty of the dome. And the use of pishtaqs and chhatris to hide the perceived imperfection of having had to raise the dome in the first place. So perfect was the end result believed to be it became the blueprint for the Taj Mahal seventy years later.

3. Secular edifice for a secular nation

Another deviation. Unlike typical Islamic structures, Humayun’s Tomb stands out for being completely bereft of any Islamic embellishments except for the apex of the 6-metre-high finial. There are no Koranic verses or the word Allah carved out in stone calligraphy here or in the intricate murals in the ceiling inside.

Instead, the facades and floors are embellished with shatkona [symbolizing the union of Shiva and Parvati] topped with a lotus flower and the 8-pointed star of Lakshmi. Eleven kalash [Hindu ritual pots] line the length of the spire. This shift was a carefully thought-out design strategy by Akbar who wanted his father’s tomb to reach out and be accepted not only by the Muslim community, but also by the largely Hindu populace in his empire.

4. Dormitory of the Mughals

Stark and solemn, the three-storey high, dome-topped central chamber contains one solitary occupant facing a latticed stone mihrab. That of Humayun. The actual body, as in all tombs, lies in a crypt underground. Humayun is not alone, though, in the edifice.

He is surrounded with over one hundred and fifty other family members, some of whose unmarked gravestones fill the corner rooms surrounding his chamber, the 9.5-metre-high gigantic plinth spread over 12,000 sq metres and comprising 64 arched cells, and other nooks and crannies. Their corpses are all buried in the crypt, along with his.

It is no surprise then that Humayun’s Tomb is also called the ‘Dormitory of the Mughals’. Some of the other notable inhabitants include Shah Jahan’s jinxed son Dara Shikoh, Humayun’s beloved Persian wife Hamida Banu Begum, and five 18th Century Mughal emperors. 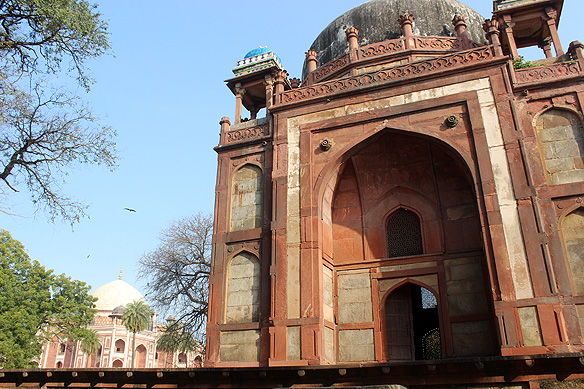 Standing aplomb in the elegant Char Bagh garden around Humayun’s Tomb, reminiscent of paradise as described in the Koran, is his Barber’s tomb. Yup, you read it right. His barber. Not some fancy queen, concubine or noble, but a simple chap who was tasked with the daily chore of shaving Humayun’s beard. The only person the emperor trusted explicitly, allowing him to hold a blade to his throat, every day.

But that is just the way Humayun was. There is an interesting incident recounted in the Humayunama, his biography written by his sister Gulbadan Banu, wherein a water carrier had saved Humayun’s life during the Battle of Chausa in 1539. In gratitude, Humayun made him an emperor for a day when he regained his throne, much to his sister’s chagrin though.

6. Quarters for an expatriate workforce 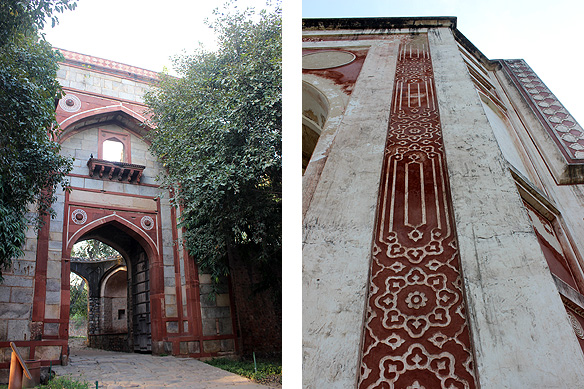 As much as we may wish to believe, Globalization is no recent trend. People have been leaving their homes and going overseas for work, or adventure, since they discovered the grass may be greener on the other side.

Five hundred years ago, likewise, a Persian architect and a whole troupe of crafts-persons left Central Asia and made their way to Delhi on Akbar’s job vacancy. A special set of quarters was built next to Humayun Tomb’s site to house them, guarded with a gate no less elaborate and aesthetic than the one fronting the tomb itself. Called Arab ki Serai, even though none of the recruits were Arabs, it is a lovely reminder of new beginnings and cross-cultural work experiences.

7. Embracing the enemy when on hallowed grounds 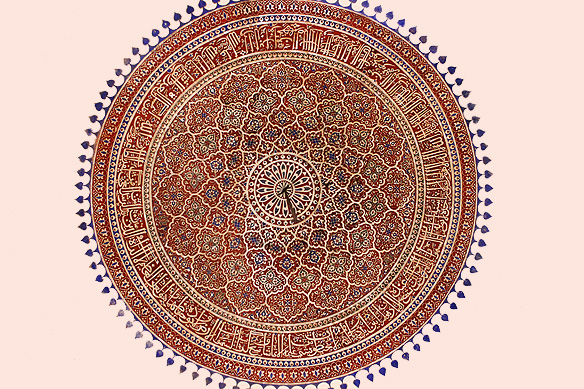 And finally, grouped together with Humayun’s Tomb in the ASI entry ticket, but not part of it either in design or purpose, is one of Delhi’s loveliest pre-Moghul sunken garden tombs: Isa Khan Niyazi’s Tomb and Mosque. Topped with chhatris covered in glazed Uzbek tiles, the octagonal tomb is surrounded by an octagonal parapet in an octagonal enclosure. The octagon being a favoured symbol in Islamic architecture, representative of the eight gates of heaven.

Ironically, when alive, Isa Khan was Humayun’s arch enemy in his role as Sher Shah Suri’s treasurer, the Afghan ruler who had ousted Humayun out of his own empire. Upon death, the two ended up being buried almost next to each other.

If you wondering how did that happen, the answer is faith. Back in the 1500s, by virtue of its proximity to the revered 14th century Sufi saint Nizamuddin Auliya’s tomb, this whole area was a hallowed cemetery where the rich and powerful vied to be buried in. It was hard to maintain enmity in the face of a sacred patch of earth for one’s burial, especially if you were destiny’s very own child.

19 thoughts on “humayun’s tomb: an ode to destiny’s child”