Bundi. The very name is evocative. Translated literally it means sweetened, fried chickpea flour—a snack indigenous to Rajasthan. When applied to a small, sleepy, powder-blue painted town nestled in a deep gorge surrounded on three sides by the Aravalli hills with a spectacular fort and palace looming over it, it becomes synonymous with one of India’s best kept secrets. A secret with myriad secrets within its folds.

Founded by a gentleman of the Meena tribe who went by the name Bunda, it was annexed by Rao Deva Hada in 1342, founder of Bundi [the princely state] and Hadoti [land of the great Hada Rajputs]. Friends with the Mughals and thereafter, the British Raj, it retained its princely status till 1947. Not many venture into Bundi; neither today nor in the past.

Here are five secrets I discovered in Bundi which make it the treasure trove that it is. If you know of more, please do share in the comments section. 😊

One of my favourite paintings in Chitrashala: Beauty, compassion, and valour.

Bundi’s most magnificent treasures are its frescoes in the Bundi-Kotah style of miniature painting (17th – 19th Century). What’s the big secret, you may ask. Well, these paintings are behind formidable poker-faced stone walls, and more often than not, also behind lock and key. Only a tiny number are open to the public, but these are enough to whet one’s appetite and hanker for more.

Some of the finest examples in the miniature style often associated with paint on paper, the Bundi school found its way in its home town to the royal private rooms to create burlesques of colour and storytelling. Each “Mahal” is painted with its own inimitable palette and themes. Let me explain.

The Chitrashala in turquoise green, black, and white, tells stories of love, lust, and the gods. Chhatra Mahal is typified with its frenzy of rich reds, blues, and greens, highlighted with gold and revolves around royal life and worship. The Phool Mahal in contrast is more matter-of-fact with its muted colouring, bevies of armies, and royal figures indulging in chequered board games. Badal Mahal, meaning “cloud palace,” is the most exquisite of all with its deep-red petalled oriental ceiling and walls filled to the seams with stories of Krishna, angels and peacocks. 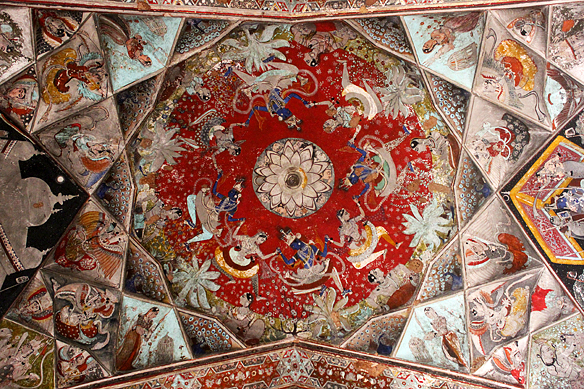 Garh Palace, site of Bundi’s prized frescoes. The palace, a private property, was built over a period of 300 years—the foundation stones were laid by Rao Raja Ratan Singh (1607–31), and thereafter added on to by his successors.

If Bundi’s frescoes are its most magnificent treasures, its ornate stone stepwells plunging into the bowels of its lands are no less marvellous.

With a stepwell, or baori as they are called in the local dialect, every 200 odd metres, there are 52 stepwells inside Bundi city, and many dozens more in its environs. They are everywhere. Inside places of worship, immaterial of the faith they prescribe to, in public spaces, as part of private homes, and in the middle of wilderness. They also are in assorted shapes, sizes, and states of conservation.

Despite its many variations, all baoris prototypically serve as catchments for rain and ground-water, and are sacred sites believed to be where the three realms of the universe meet. With a series of steps descending underground they are an essential part of Indian architecture and culture, and also aesthetically one of the most beautiful.

So, which are the best of the best baoris in Bundi? Make sure you spend a few moments gaping in awe at Raniji ki Baori, Dabhai Kund, Bhawaldi Baori, Nahar Dhoos ki Baori, and Dadhi Manthan Baori. Have more than a few moments? Read my post on my 10 favourite stepwells in Bundi to help you add to this list! 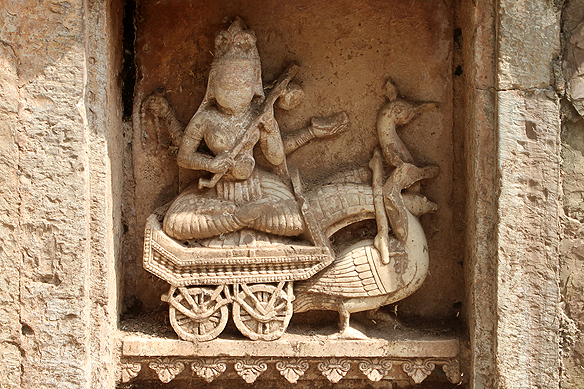 Top: Dadhi Manthan Baori. The baoris or stepwells in India served as both catchments for rain-water as well as religious sites and have the gods Ganesh and Saraswati flanking the entrance as a norm. Bottom: Bhoraji ka Kund. Kunds [a type of stepwell] are built around a ground-water source and have been a focus for local everyday life since their inception thousands of years ago.

One of Bundi’s most astounding, yet least known treasure is its 15,000-year-old rock art lining the Chambal river. Richly illustrated using mineral and vegetable colours, the cave paintings reveal a world of shamanistic rituals and hunting scenes replete with hunter, buffalo, bison, and deer.

First discovered in 1997 by a local sweetmeat-shop-owner-turned-amateur-archaeologist aka Kukkiji, the collection comprises of 101 sites [to date] and is spread over a distance of 30 kilometres from Bijolia to Banki. Some of the finest paintings are halfway at Gararda, 35 kilometres south of Bundi.

True to the adage—the journey is as important as the destination—the unpaved road slices through emerald green rice paddies, Savannah grasslands, serene rivers, Rabaris dressed in vibrant reds, and past the homes and lives of the Bhil [the local Adivasi tribe].

To know what a day trip to the rock paintings is like, you may enjoy reading this.

Paintings and the canvas. Above: A Mesolithic bison looks on through the millennia; Below: The Chambal river as it flows past the caves, once the homes of prehistoric humankind in north-west India. 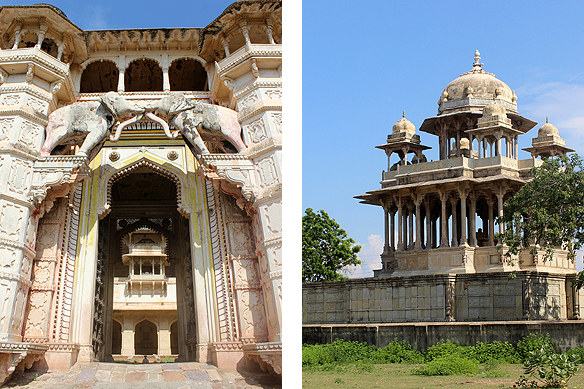 Bundi’s architectural gems: [Left] Hathi Pol topped with entwined trunks of two elephants at Garh Palace; [Right] The 84-pillared cenotaph with a large Shiva lingam in its centre was built by Rao Raja Anirudh in memory of his foster brother, Deva. (1683)

Like all of Rajasthan, Bundi too brims with lyrical architecture evocative of the Rajput era and princely lives. But with a twist. The royal properties in Bundi still belong to the “Maharaja,” albeit as a disputed one, with heirs apparent fighting over its legal possession. Exquisite palaces, chhatris, and a star shaped fortress [Taragarh], thus lie locked away, deserted, and out of bounds. Which somehow just seems to add to the town’s enigma.

Whilst a miniscule part, luckily for us plebs, is open to the public, some may be accessed with a small token to the caretaker. Some, however, need to be peeped into from overhanging rocks and over boundary walls.

Don’t miss the gigantic Garh Palace with its distinctive Hathi Pol and stunning frescoes, the crumbling Shikar Burj which served as a hunting lodge, Sukh Mahal where Rudyard Kipling stayed as the Rao’s house guest, and Phool Sagar Palace nestled in the dark Aravalli hills. And there is more. Pretty chhatris in all sizes top the hills, abound in Kesar Bagh, the private royal cremation grounds, and bloom into majestic beauty in the form of the 84-pillared cenotaph.

Bundi is the Hada Chauhans’ private home and has been so since 1342. The stone monuments, towering over the powder-blue walls of the town at its feet, ensure both the traveller and native don’t forget this. 🙂

Sukh Mahal on the fringes of Jait Sagar was built by Rao Raja Vishnu Singh (1773–1821) under the supervision of his Diwan Sukhram in 1776, after whom it is named. Rudyard Kipling wrote part of Kim whilst staying here as the Rao’s guest. 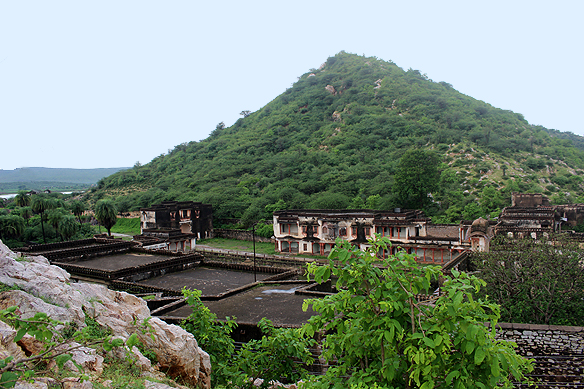 Nestled deep in the Aravalli hills, Phool Sagar Palace on the banks of Phool Sagar was the last residence of Rao Ranjit Singh.

5. Charms of a small town frozen in time

The sacred in the ordinary: My friendly neighbour with a vermilion tikka; A shrine dedicated to Bundi’s ruler, Rao Ummed Singh (1749–1804) who became a saint at age 42 and is still worshiped by the people of Bundi.

Cut off from modernism at large by virtue of its fortress walls, both man-made and natural, Bundi is the proverbial small Indian medieval town. With a population of just over a 100,000, the Old City with Garh Palace as its backdrop is a delightful maze of alleys populated with people, cows, dogs, chicken and pigs, and all forms of transport up to a few feet wide, in friendly camaraderie.

Be prepared to be invited to strangers’ homes for meals and being told their entire life stories at the drop of an uninvited hat. Sit in absolute silence, save for a few birds’ singing their hearts away, at one of the many lotus-covered lakes whilst dusk falls and the palaces get lit up. Have a delectable kachori and saccharine sweet chai in the company of a Rabari on the steps of a medieval store in a minuscule lane, savouring its timelessness.

There is something magical, I assure you, about walking through old city gates, looking up at narrow havelis with ornate balconies, warm greetings, and the lack of commercial tourism. Yes, the little town has majestic attractions, as I have written above. But what makes the entire Bundi experience unparalleled is its simplicity.

Chaugan Darwaza in the Old City at day break. 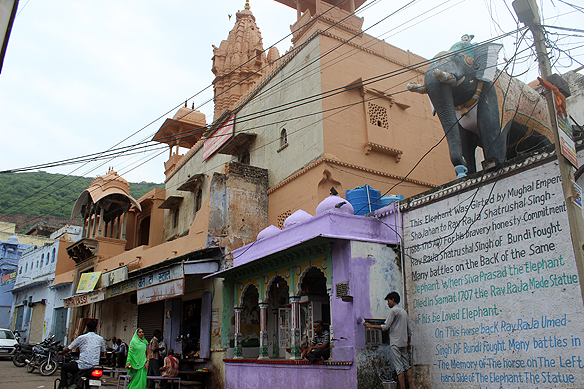 Lastly, what’s an old town without stories at every nook and corner. The elephant perched on the corner of the road leading out from Garh Palace was put up by Rao Raja Shatrushal Singh in 1707.

Shah Jahan, the Mughal emperor is said to have presented an elephant called Siva Prasad to the Rao for his “bravery, honesty and commitment.” The Rao fought many a battle seated on its back and had the statue made in its memory.