Was it Area A, B, or C. I struggled to get my head around them as the highway wound its way through all three, one into the other in a convoluted mix. At each crossroad and Area juncture there were checkpoints galore. Israeli soldiers behind bullet-proof glass and on watch towers pointed their guns at every vehicle and person that passed by on the road.

“Sit still please and no pointing.” Our Arab driver insisted as we slowed down at each checkpoint. I was torn between ducking under the seat and staring at the soldiers in warped fascination. Before I could decide, we had moved on. Only to be met by another checkpoint and red road signs.

“This road leads to Palestinian Village. The entrance for Israeli citizens is dangerous.”

“This road leads to Area ‘A’ under the Palestinian Authority. The entrance for Israeli citizens is forbidden, dangerous to your lives and is against the Israeli law.”

Area A turns out to be a string of typical Middle Eastern cities with markets, mosques, and a well-worn homely feel. To get from one to the other though, one needed to travel through the war zone highways. Makes for a difficult commute if one had to do intercity travel on a regular basis. END_OF_DOCUMENT_TOKEN_TO_BE_REPLACED

Eight metres high. That is twice the height of the Berlin Wall. With watchtowers and a buffer zone for electric fences and military patrols, the Wall surrounds Bethlehem.

It is part of a 708-kilometre-long separation barrier of which 15% runs along the agreed Green Line, while 85% of it encroaches into Palestine, splitting communities, villages and cities alike.

On one side of the wall, a ‘western’ world thrives. On the other, an ‘eastern’ world is shackled, its every move monitored with cameras, sensors, and hundreds of checkpoints. Somewhere in between, in the ‘seam zone’ flanked by the Green Line and the separation barrier are 25,000 Palestinians living on 9% of Palestine, neither here nor there, and requiring a permit to exist.

Travel is not always about pretty candy floss sights. At times it is also about harsh realities, often painful and ugly.

I had heard a lot about the Wall. Yet, the actual sight of it was overwhelming. Hard to digest. Sending shivers down my spine. END_OF_DOCUMENT_TOKEN_TO_BE_REPLACED

A web of fuzzy boundaries, intruded spaces, complex unresolved issues piled on top of each other. Hebron is the story of the lineal descendants of two half-brothers of a common father, perpetually at war over one question: Who has more rights.

Have you ever wanted to understand the Israeli-Palestinian conflict? Okay, ‘understand’ is perhaps being overly ambitious. How about inch a little bit closer to making sense of the dynamics between the two?

If yes, then head to Hebron. The answers are there.

Thirty kilometres south of Jerusalem, Hebron is the largest Palestinian city in the West Bank. An industrial town, it generates one-third of West Bank’s GDP. Its UNESCO World Heritage Site status celebrates the limestone Mamluk-era Old City and the world’s only public building within which has stood intact for 2,000 years, and continues to serve its original purpose. That of a monumental memorial and place of worship.

But apart from the above two, and more than the two, Hebron is also a microcosm of the Israeli ‘occupation’ of Palestine. 800 Jewish settlers, protected by hundreds of Israel Defense Forces [IDF] soldiers, live among 200,000 Arab Palestinians. International law considers these Jewish settlements as illegal.

Every story has two sides. Mired with blood, tears, and conflict, Hebron more than others, as I discovered one autumn day in Israel’s Occupied Territories. END_OF_DOCUMENT_TOKEN_TO_BE_REPLACED 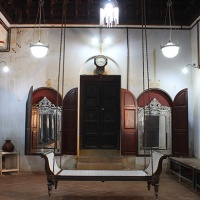