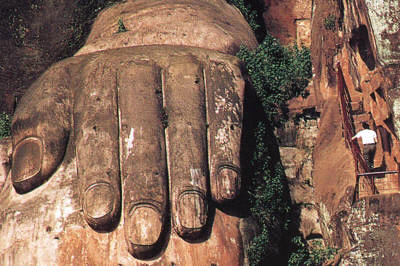 The colossal red-stoned statue of Buddha at Leshan

I am back in China from Tibet. Back in Chengdu and on my way to Leshan straight from the airport. It is raining, wet and misty. Leshan, presiding over the confluence of two rivers which sweep past the foot of Lingyun hill, is a huge statement of faith and site of the world’s largest carved stone Buddha. Sculpted from the rock face, the effigy is a staggering 71 meters in height and is even more impressive for having been made over 1,200 years ago during the Tang dynasty. The Buddha’s head is 15 meters high; his ears come in at a lengthy 7.5 meters, and his sizeable feet can hold an audience of 100 people, while he looks down with his three meter wide eyes. END_OF_DOCUMENT_TOKEN_TO_BE_REPLACED